Welcome back everyone. On today's drive from Killeen to Fort Stockton, Texas, my Geocaching adventure takes me to a few ghost towns, abandoned school buildings, some cemeteries, and a cool abandoned outdoor stadium. So let's get started... 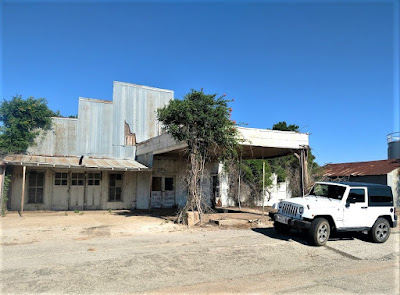 Heading west on US-190, I drove through to Brady before turning north on US-283. My first stop was a quick roadside geocache (GC2ED5W).

A few more miles up the road is the small town of Lohn, Texas. The first settlers in the area were the William F. Lohn family in 1879. In 1881 they were joined by other German families. Boi Albert Cornils immigrated as a young adult to this area in 1884 wed another young immigrant, Bertha Lembke. The couple settled on ranchland east of Lohn and reared five children.

Morgan Stacy built a store at the community site and ran the post office when it was granted in 1890. In 1892 the community had a flour mill and gin, a general store, and a Baptist church. The first school was a one-room structure built in 1893. In 1896, the Cornils deeded five acres for a free public school adjacent to a community burial ground on their property. Several unmarked graves predate the first recorded burial, that of Heinrich Rudolph (d. 1883).

Separated about a mile apart, there are two cemeteries; the Lohn Family Cemetery (GC7QD68) and the Lohn (Community) Cemetery (GC7QD61). There weren't any geocaches hidden in either cemetery. So of course I had to remedy that situation. 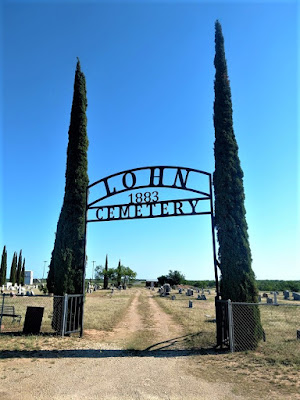 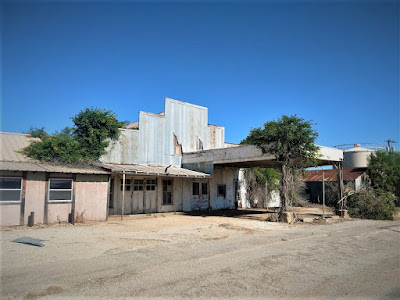 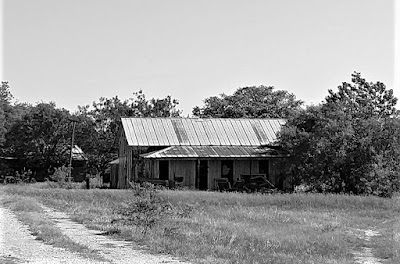 A few miles west down Ranch Road 504 is Pear Valley, Texas and my next few geocaches. It began about 1908 as a widely scattered settlement called Saddle Creek. When the post office opened in 1910, the name was changed to Pear Valley. The population remained stable at forty-five from the 1930's to the 1960's. In 1964 it fell to twenty. Two churches and two businesses appeared on the 1987 county highway map, and the town reported thirty-seven residents in 1990. The remains of the school, built in 1935 (GC48A5, GC11BB1), General Store building, and the cemetery (GC5ADBJ) are about all that remain. 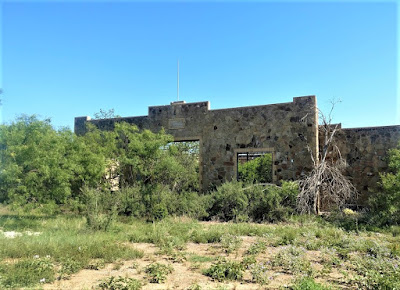 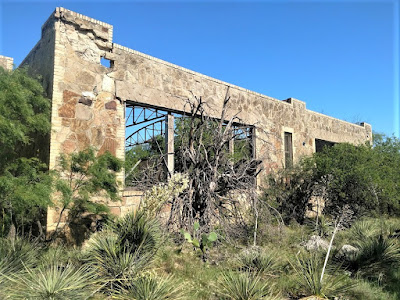 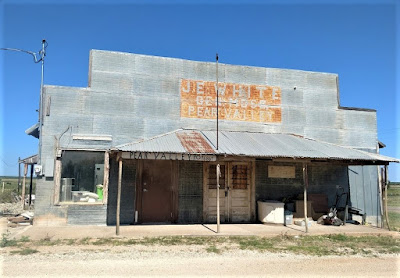 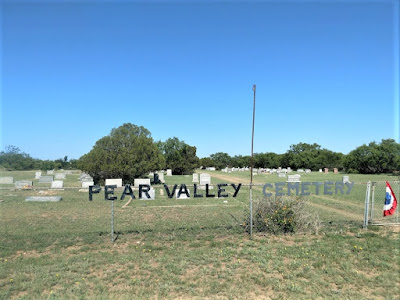 My next stop and geocache (GC11BB2) was in the ghost town of Salt Gap, Texas. Located at the intersection of County FM 503 and FM 504, it had a population of just 25 in 1990. Named for the local creek of the same name, the town had a post office in operation from 1905 to 1913 - the year it closed. It reopened in the 1920's and closed for good several years later. The population high-water mark was 60 people in the late 1930's. The town never developed past the store and school stage, but it remained a viable community in 2006 and still appears on the county map. Not much to see here but the signs announcing its existence and a few buildings at the intersection.

A few miles around the corner from there was another ghost town that really had my interest. The early settlers of Doole, Texas (GC11BAX) wanted to name their town in honor of a prominent family in the area, the Gansel Family, therefore this farming and ranching community was originally known as Gansel, Texas. Residents decided to establish a post office in approximately 1911 and ask the postmaster at Brady, Texas for advice. The postal service in Washington D.C. said that the name Gansel was unacceptable, so the settlers named their post office and town after David Doole, Jr., the postmaster at Brady. These are just a few of the many photos I took in Doole. 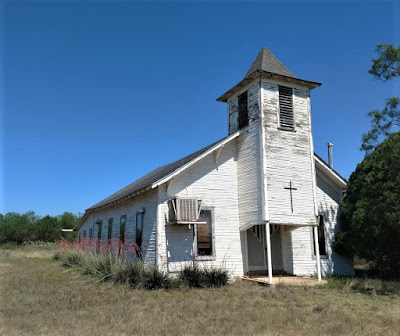 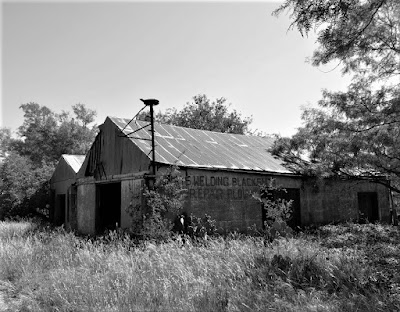 Gray's Machine Shop which handled all the auto and tractor repairs, welding, and blacksmith. 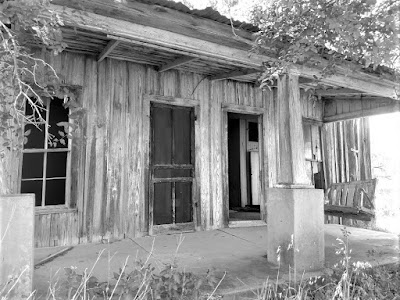 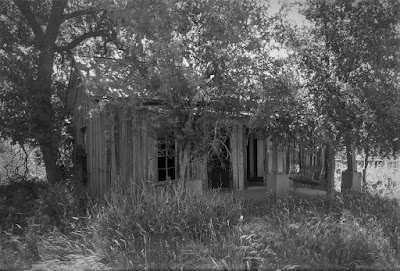 This was to me the most fascinating part. A lot of towns have old buildings. But how about the school sports stadium where the bleachers were built into the side of the hill! Kinda like ones I saw of the ancient ruins in Athens, Greece. Even had the old ticket booth standing and still in decent shape. There's even an old rusty 1957 Plymouth sitting in the mesquite where the parking lot probably was. Darned if I forgot to take a photo of it though. This ghost town is definitely one of the must see on a roadtrip through Central/West Texas! 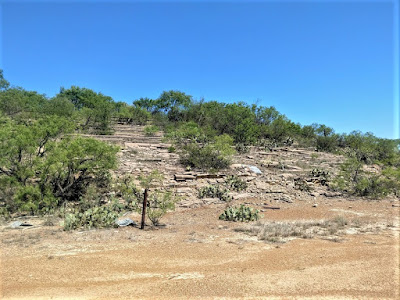 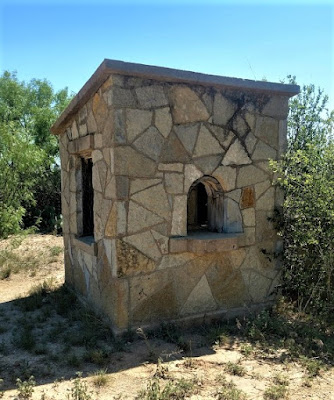 Continuing slowly westbound, I arrive in Millersview in Concho County and my next two geocaches (GC11BBB, GC5ADC4). Named for Edward D. Miller, who co-founded the town with one Henry Barr. Previous settlement had been scattered along Mustang Creek - some seven miles NE of present day Millersview. The town was granted a post office in 1903.

In 1914 the town had a population of 160. From 300 people in 1931, it was reduced by two thirds by 1933 but somehow managed to rise to 250 as the Depression was winding down. The Millersview school had eight teachers in 1940 to teach both elementary and high school grades. High school classes were suspended in 1958 although elementary classes continued until the school closed sometime before 1989. The population was 175 in 1963, declining thereafter to 70 by 1970 - an estimate that stayed in place for thirty years. Students from Millersville now attend classes in Eden. The school itself is now degrading, but the people have restored the gymnasium (built in 1939) and continue to use it as a community center.

The community is reportedly the only town in the United States using the name Millersview. 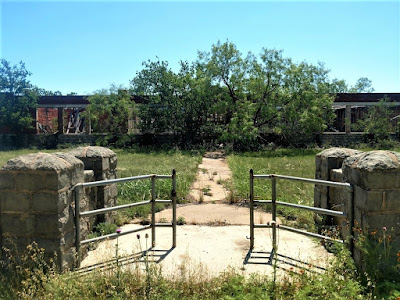 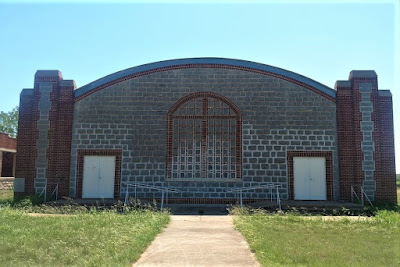 Also in Millersview is the Our Lady of Guadalupe Catholic Church. They have erected a monument and marker in 1998 honoring the Mission San Clemente. The mission was established in 1684 by Spanish missionaries for the purpose of sharing the Catholic faith with Indians in the area. In 1984 mass was celebrated at this location to commemorate the founding of the mission 300 years ago. A congregation of more than 3,000 joined many of the Texas Bishops in the Liturgy. 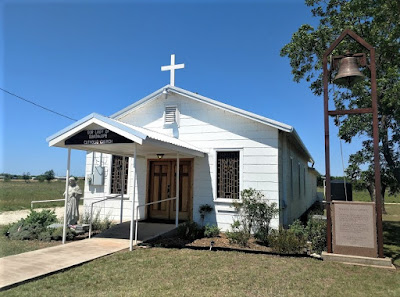 My next geocache was a roadside cache on FM 765 on the way to the ghost town of Eola, Texas. The Eola Museum cache (GC10V2A) is at the corner of a dirt road leading to the Barrow Ranch. Earnest and Dorthy Barrow founded the Museum in 1976 to house their extensive collection of memorabilia from the early days of Concho County. It has since grown to include items from all over the world, collected by the Barrows and many other donors. As a gift in perpetuity to the public, the Museum is owned and operated as a non-profit foundation by a Board of Directors.

Four large buildings house the collections that range from delicate crystal to a magnificent pipe organ. Visitors can step back into history as they view many different antiques. Some of the largest collections contain thousands of cat figurines, hundreds of Hummel and Goebel figurines as well as thousands of arrowheads and other Indian artifacts. There are also gems, minerals, cars, farm equipment, medical and dental equipment, windmills, and seashells of all types.

I didn't have the time to drive down the road to see the museum. Maybe another day I just might.

Another side road so that I don't have to backtrack, and I arrive at Henderson Chapel, Texas (GC1DZFX). Henderson Chapel, also known as Hendersons Chapel and as Henderson, was near a tributary of Kickapoo Creek. In 1936 Henderson Chapel had a business and a school. In 1940 its school, which encompassed grades one through seven, had an average daily attendance of twenty. By 1955 the community's school had been consolidated with the Eola school district. The 1963 county highway map named the community, but showed no buildings at the site. The only thing I saw was this building which is barely standing and overtaken by trees. 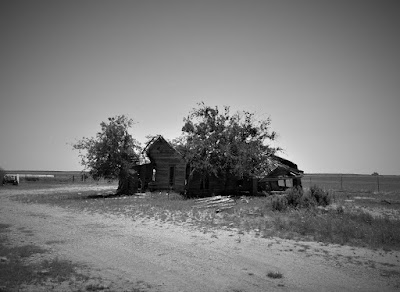 Finally reaching Eola, Texas, the area was originally called Jordan. However it changed its name in 1902 when the first store was built and the town only had four families. Eola was created during a land boom when county school lands were put up for sale at fifty cents an acre in the 1890's. The sale attracted many Europeans – primarily Czechs.

Recently a carpenter from Washington moved in and has been restoring the old school building a little at a time. He also opened up a steak house on one end and is only open Friday and Saturday to help raise money for the restoration project. I thought I had taken a photo of the school, but I guess I didn't.

A few miles north of Eola is the Mereta-Eola Cemetery (GC1DZGE). Not a whole lot of history other than it serving the towns of Mereta to the west and Eola to the south. Still in use today with just under 100 burials listed, it dates back to the late 1800's. 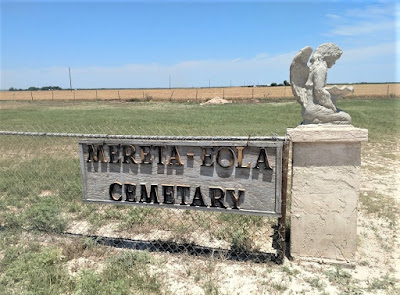 My last two geocaches for the day are in Mereta, Texas (GC1ABHM, GC10V2C). Mereta, also known as Fisherville and as Lipan, was named by its postmaster in 1902 for twin sisters Meta and Reta Burns, had a gin, two stores, and a school in 1904, when a town plat was made. Its population fell from seventy-five in 1914 to thirty in 1925. In 1931 Mereta had three businesses and a school with three teachers; by 1934 the community's population was reported as ten, with four businesses. The 1936 county highway map showed two churches, two factories, a post office, a school, and scattered dwellings at the town site. By 1939 a store was operating at the local community center. The population of Mereta was estimated at seventy-five from the early 1940’s through the early 1990’s. The 1984 county highway map showed a church, a business, and a park. 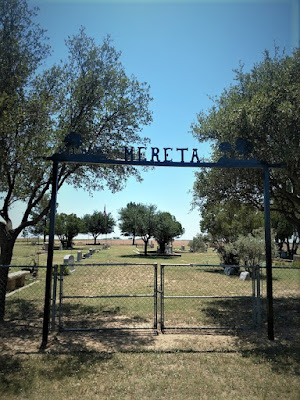 That was it for today. Spent enough time on these little backroads and ghost towns. I still had 180 miles of driving before reaching Fort Stockton. Gotta get moving. Thanks for riding along and be sure to either Follow Me via the button on the right (if you're on you computer), and on Facebook or Twitter for the latest updates.
Posted by Mark at 7:53 PM