On this day, another Sunday and another 360 mile drive from Killeen to Fort Stockton, Texas, I found seven geocaches and visited a couple cemeteries, an old schoolhouse, and a ghost town. 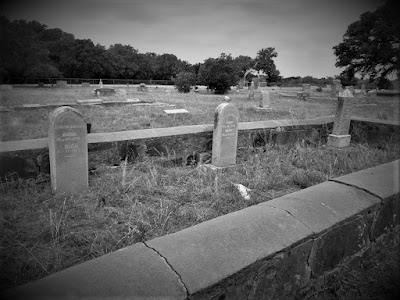 I had to make a stop in Odessa also which would normally have me on a more northerly route up through San Angelo and began to head that way. Then I remembered a new cache publishing along my route to the south in Burnet. I checked the phone and yes it was still available. So I made a u-turn.

Wallace Riddell served as Burnet County Sheriff longer than any other county sheriff in Texas. I’m wondering if maybe it was longer than any sheriff anywhere? He ranched, and also won rodeo championships for roping. The really remarkable thing about him is that he didn’t carry a gun! Yep. After a bad incident with a gun in his first year as sheriff, he vowed never to go armed. But he did have deputies to do that, if the need arose.

The geocache (GC7QGF9) was located in a city park named after him. Arrived at geocache to find a blank log sheet and stamped my name on the top at 10:55 AM! WOHOO a First to Find!

Continuing west on Highway 29 over to Llano, turning northwest on Highway 71 to the Salem Cemetery (GC35JNM). William Leggett Lewis, a physician and ordained Methodist minister who served in the Civil War, came to Texas with his family in 1878. Lewis' land was probably used for a family and community burial ground before 1884, when Rebecca Ann Stevenson, the daughter of Joseph and Eliza Stevenson, was interred in the earliest marked grave on this site. Dr. Lewis' son, M Dee Lewis, was interred here a month later.

Dr. Lewis and his wife deeded 100 square yards of land for use as a cemetery to the Methodist Episcopal Church in 1888. Of more than 200 known graves in the Salem Cemetery, 61 are unmarked and a few have initials scratched on rocks. Twelve graves are those of civil war veterans. Others served in World War 1, World War II, and the Korean War. 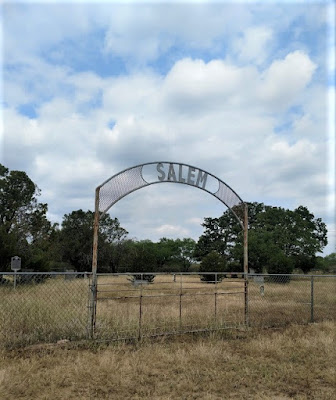 Several miles up the road was the ghost town of Valley Spring, Texas and my next three geocaches. The first stop was at the Valley Spring Volunteer Fire Department building (GC57E1T).

The next geocache (GC1NVGN) was at the old school building built in 1938. This area was originally settled by the O. C. J. Phillips family in 1854 and was known as Phillips Ranch in the early years. The Phillips's were soon followed by several other families, including that of Davie Owen. Phillips's son, W. O. Phillips, established a cotton gin and sawmill on the ranch in 1860, known as Whistleville because of the steam whistle that announced the opening of his business day.

A rival mill and gin were built by Davie Owen less than a mile away and were facetiously referred to as Bugscuffle. When a post office was established for the community in 1878, it was located at the Bugscuffle establishment, which was thereupon renamed for the numerous springs in the area. The stage route from Llano to Brady was changed in 1882, and Owen built a store on the new route, at the site of present Valley Spring. From a population of 100 and several businesses in the 1930s and 1940s, Valley Spring had declined by 1968 to fifty people, a post office, and a store. The population through 2000 was still reported as fifty.

The old school building below is used as a community center today. 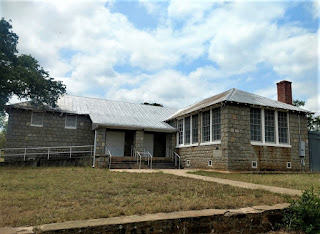 The last one in this community is at the Valley Spring Cemetery (GC1NVNQ). This hilltop cemetery has served the local community since 1867 when Martha Epperson Eaker and Hattie Phillips, daughters of the pioneer settlers, were buried here. Burials continued, and in 1877 the Epperson family donated land for the "benefit and convenience of San Fernando Valley." Cemetery trustees acquired another acre in 1889, the deed referring to the "old graveyard west of the Valley Springs."

Renowned pioneer physician, Dr. W. Y. Fowler (1860-1935), who began his 46 year Llano County practice in Valley Spring in 1889, acquired the surrounding ranch in 1897 and provided additional land for the cemetery. More than 100 graves in this cemetery are marked with a rock or unlettered stone. The grave below is that of David Owen (1791-1873), the father of Davie Owen mentioned above, who was also a veteran of the War of 1812 and a Texas Ranger. 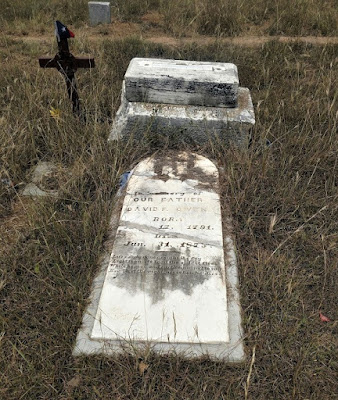 Now that it is getting so late in the afternoon and I still got a long way to go, I drove non-stop into Odessa. I made a quick geocaching find after stopping for gas (GC7N73E). Then standing in line at Walgreens, I checked on another new cache that was published about 30 miles west off I-20. Yep, still unfound!

"Welcome to Thorntonville" (GC7Q9PH) is for a small town just outside of Monahans. I arrived and quickly find the cache and a blank log sheet. I happily stamp the top of the log sheet at 5:19 PM for another First-to-Find! WOHOO!

That's all for caching. Another hour drive down to Fort Stockton and that put's me over the 400 miles for today with the detours. I'm ready for this day to be over!
Posted by Mark at 7:15 PM