On this day, a Thursday, we got out of work early to have long weekend. This solar project I'm working on here in West Texas is winding down to an end. I thought I would have already been laid off, but as the last surveyor on site, I need to stay until the end. For now I will continue the drive between Fort Stockton and Killeen every weekend.

Normally driving eastbound is at the end of a long workday. Therefore, I only stop for gas and food. My geocaching is on the Sunday return trip when I have more time. But getting out early today, I made a few stops just to break up the drive.

Passing through Iraan on US-190 east of town, you climb up out of the valley and over the mesa's. In doing so you get these great views. On this trip I decided to stop and get a few photos. Hard to tell in this shot, but I'm actually looking downhill. 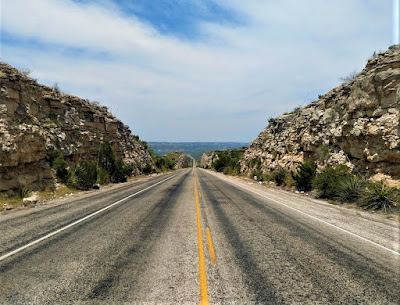 I stopped for my first geocache in the ghost town of Hext at the cemetery (GC5ADA0). Hext is at the intersection of State Highway 29 and Farm Road 1221, sixteen miles southeast of Menard in eastern Menard County. It was known as Maringo (Marengo) when the area was settled in the 1870s, but residents changed the name to Hext in the late 1890's in honor of Joseph Robert Hext.
A local post office was established in 1897 with Ennis Stark as postmaster. In 1914 the community had a cotton gin, a hotel, two general stores, and 125 residents. A Church of Christ had been organized in 1904, and a Baptist church was established in 1916. At one time Hext had a school. By the mid-1920's, population estimates for the community had fallen to forty; they rose to sixty in the late 1940's and remained at that level through the mid-1980's. Today the postmaster stated that the post office serves 49 residents through its boxes and route deliveries. It is one of the smallest in Texas.
The photo below is of one of the old structures still standing just down the road from the cemetery. 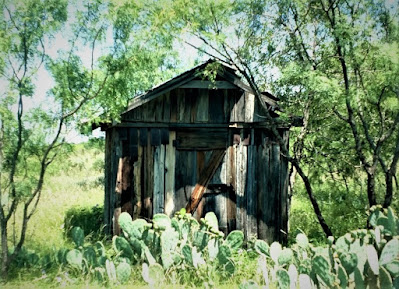 Then there was Grit, Texas (GC11957). Settled by cotton farmers around 1889. When the time came to open a post office the town wanted to be named after General Frederick Funston, Spanish American War Hero. Saddened to discover that Funston had already been so honored in Texas, the town settled on the more earthy name of Grit - said to be the texture of the local soil. The post office opened in 1901, the first store opened around 1903, and the town had its first school building in 1908. The Baptist church met in the Grit school until it built its own building in 1924. Telephone service began around 1914 when the town had 30 people.
It remained at 30 until the 1960's when 63 people lived in Grit. This number held into the mid 80's, but it has since declined back to the 1914 level of 30 citizens. The post office has since been discontinued, but Grit remains on state maps. Nothing here except the schoolhouse and the 2 signs announcing that you are in Grit and those are less than a half mile apart. This is the old schoolhouse which is used as a community gathering place. 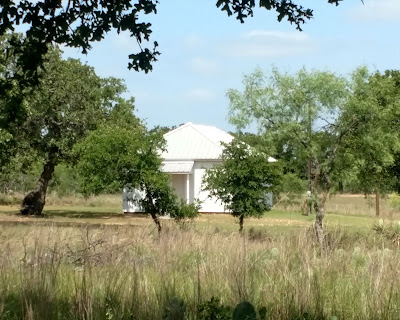 Also in Mason County was my final geocache stop this afternoon. The historical marker states that the Crosby Cemetery (GC1NVFP) is the first burial ground for the citizens of Mason and Koocksville. This cemetery traces its history to the 1850's. The oldest documented burial is that of Kate Lemburg, who died in 1856. Also interred here is Mason County's first sheriff, Thomas Milligan (1810-1860). The Crosby family purchased the property surrounding the cemetery in 1866, and it has been known as Crosby cemetery since that time. Those buried in the cemetery include members of the Crosby and other pioneer families. It stands as a reflection of the area's heritage.
So just three stops on the drive back to Killeen. A few quick stops to break up the 300+ mile drive home. A little more history to be learned in West Texas.
Posted by Mark at 3:15 PM