2018-06-09: Geocaching in Central Texas Through History, Cemeteries, an Elephant and Fairies!

Welcome to another edition of our AwayWeGo's Geocaching Adventures Blog. While I'm still way behind in my writing, I am hopeful that one day I'll catch up. I even stopped finding new caches for a few months at the beginning of this year in an effort to catch up. But none the less, much of what I tell you about is still there for you to see today if you like. So let's get started and see what we found on this day back in June 9, 2018.

Having worked only 5 days this week instead of the usual 6 days, I took the opportunity to go out on a Geocaching Adventure with my wife today. We decided to take a drive up to Hico, Texas to get some chocolates. It's a few hours away, but the chocolate is worth it! Along the way we'll be grabbing some caches and sightseeing on this roadtrip.

Our first geocache is called "Iron Elephant" (GC5XFB3). The cache was placed along the roadside where this rather large sculpture of an elephant happens to be sitting. It was hard to get a decent photo from the phone with it sitting so far off the roadway. As I was pulling away and passing by the Rockin-R Ranch gate, I saw another large statue of a giraffe. Again, sorry for the poor photo quality. But if you happen to be driving up SR-36 near Whiteway, TX, keep your eyes open for some large wildlife! 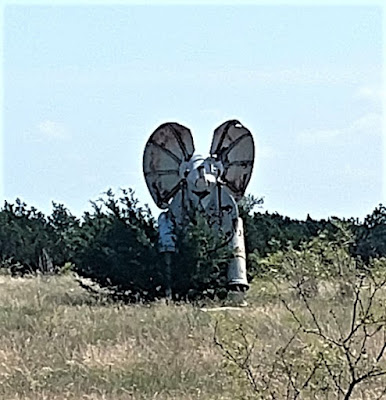 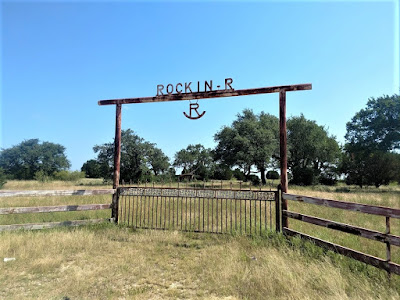 Just up the road in Whiteway is the Evergreen Cemetery (GC171KZ). Whiteway (formerly Whitesboro), in southeast Hamilton County, was established to serve the needs of motorists between Jonesboro and Hamilton. The settlement had a school, a church, a cemetery, and scattered farm units in 1936. At one time its population was fourteen; in 1966 four inhabitants were reported. Whiteway was named for Steve White, a local resident, whose sons established and operated the filling station, garage, body shop, and grocery. Whiteway appeared on local maps during the late 1980's, but no population figures were available. By 2000 the population was listed as ten. There was a John Stephen White (1880-1964) buried in the cemetery, but I'm not sure if he was the one the town was named after. 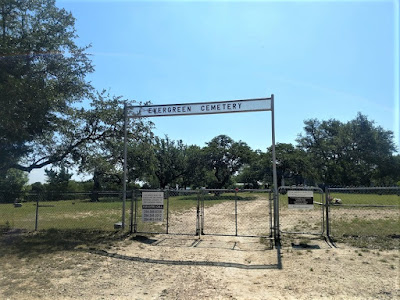 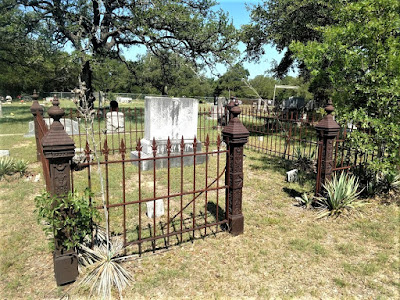 On the way to our next cache, I saw this old covered wagon sitting on the property corner of this ranch entrance. I just had to pull over and take a photo. You never know what you may find driving the rural backroads of this country. 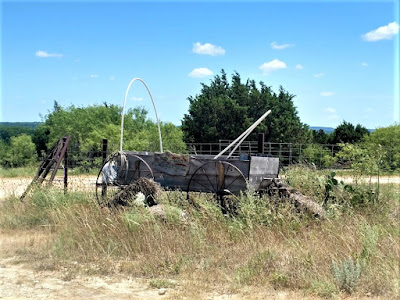 Our next geocache was at the Rock House Church and Cemetery (GC10924).There's not much left to the actual church structure. I forgot to even get a photo. The cemetery is in dire need of some TLC. Mostly overgrown with weeds and shrubs. Some of the headstones have been broken.

Trying to research, I can't find any history on this church or the cemetery. The only thing that I can find is that there are 115 burials here dating back to 1870. Other than that... if you know of any information I'd be happy to hear from you. 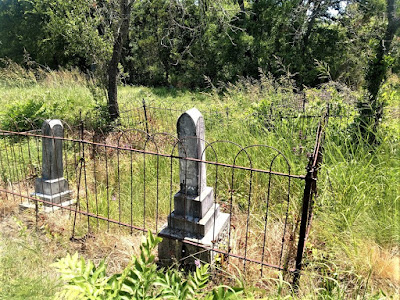 Not too far away was our next cache at Bulman Cemetery (GC1CW5R). Established in 1884 because of the death of Emily Bulman, the wife of the Rev Henry Jefferson Bulman who was one of the early settlers in the area. There are just over 140 burials in this cemetery. One of the interesting displays by a headstone is this red boot in a basket. 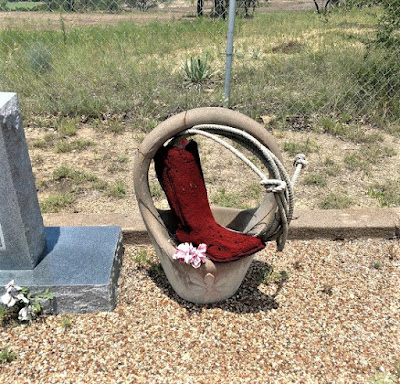 Continuing northbound, we came upon this small town called Fairy, Texas. There wasn't a geocache in this town so it didn't come up on my radar. But I did take a quick stop for a few photos.

Fairy was first known as Martin's Gap for James Martin, an early settler who took an oxcart through the mountain gap, which wasn't an easy thing to do back in the day. When the post office was established in 1884, the town was named for Fairy Fort, the daughter of Confederate Army Captain Battle Fort. At a mere 2' 7" and about 28 lbs, Fairy Fort was one of the smallest Texans on record. She was married and divorced twice and had only one child, by her first husband, who died at birth in 1893. She died on October 22, 1938 at age 73 and is buried in the Fairy Cemetery.

The town of Fairy had a cotton gin from 1900 to about 1936 and schools, churches, and businesses serving the greater ranching and farming community. In 1947 Fairy had a post office, three churches, three businesses, and 150 people. The post office closed in 1957, and the Fairy school district was consolidated with the Hamilton schools in 1967. In 1980, 1990, and 2000 the population was thirty-one. Pictured below is one of the remaining churches and a tree carving in town. 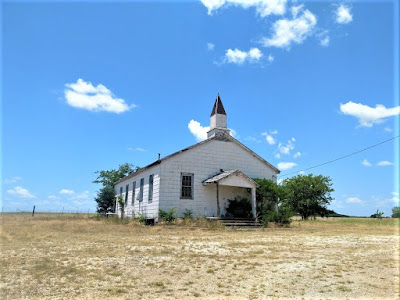 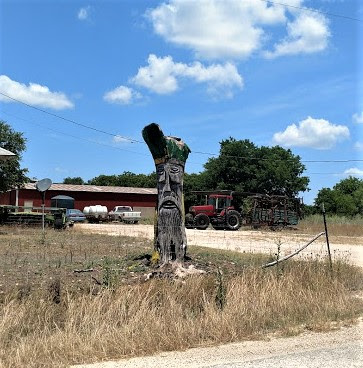 Maybe next time through they'll have a geocache to find or I'll hide one myself.

We finally arrived in Hico, Texas and our chocolate destination! Wiseman House Chocolates is a must stop when visiting Hico. This is our third time here and the chocolates are some of the best we've ever had.

Next a quick stop by the Hico Cemetery for our next geocache (GC6YNN7). There's just over 4000 interments dating back to 1862.

Then off to the Carlton Cemetery (GCT77Q). On July 9, 1867, a farmer J. E. Pinkerton traveling to Carlton on horseback, became bogged down in a muddy swamp while crossing Tywhappatee Creek. While struggling to free his horse he was attacked and killed by a band of renegade Comanche Indians. This occurred the same day that renegade Comanche Indians attacked the country school house seven miles northeast of Hamilton. Two children were taken captive and their teacher Ann Whitney lost her life protecting her students. It is unknown which attack happened first. Pinkerton was the first burial  in what became Carlton Cemetery. 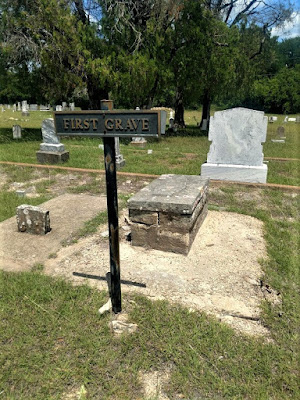 And finally our last geocache for the day was at the Toliver Cemetery (GC14DV8). Burial place of pioneer settlers, including James H. Neel, one of first seven men to bring families here in 1852. His home was a quarter mile to the east of cemetery. He was also postmaster of Resley's Creek Village 1858 to 1866. 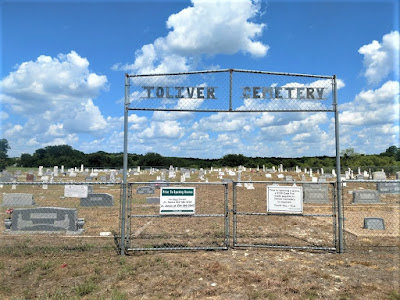 That's it for today. Don't forget to follow along with us on Facebook to get the latest updates and occasional pictures not found in our blog posts. See you next time.
Posted by Mark at 8:10 AM