Hello and welcome back to another entry of AwayWeGo's Geocaching Adventures. One of these days I might actually catch up in my writing to the present time. I'm starting to gain some ground. In this blog I take you back to our Christmas roadtrip in 2018. This year we decided to drive from Central Texas to Central Florida to spend Christmas with the family.
It's a 1200 mile drive to get there and since we're leaving out on the 22nd, we'll be spending way too much time on the boring I-10. We do make some detours in Louisiana to go geocaching and pick up some new counties. But the return trip however is when we stick to the backroads the majority of the time! So here's some of the highlights:
Our county first stop was in Vermilion Parish, Louisiana at the Old Mason Cemetery (GC1NR88) in a town called Abbeville. From the historical marker: "On this site was the first of our town's Masonic cemeteries and served Masons and Protestants alike. It has been virtually unused since 1905, although the latest tombstone reads 1954. The earliest recorded death was in 1868. A. G. Maxwell donated this land to Abbeville Lodge in 1869. The first master of the lodge, Dr. W. D. White was buried here as was several of his children. Restoration of the cemetery began in 1997 by dedicated volunteers under the auspices of the City of Abbeville, current owner of this sacred soil." Continuing east on US-90, we stopped for a quick roadside geocache (GC1NKPH) in New Iberia to get the county of Iberia Parish. Then another cache (GC2KNG5) in the town of Franklin to claim a find in St Mary Parish. Also in St Mary Parish, I stopped for another geocache (GC2HH84) in the town of Amelia near this overpass which had all these vines growing up the columns. 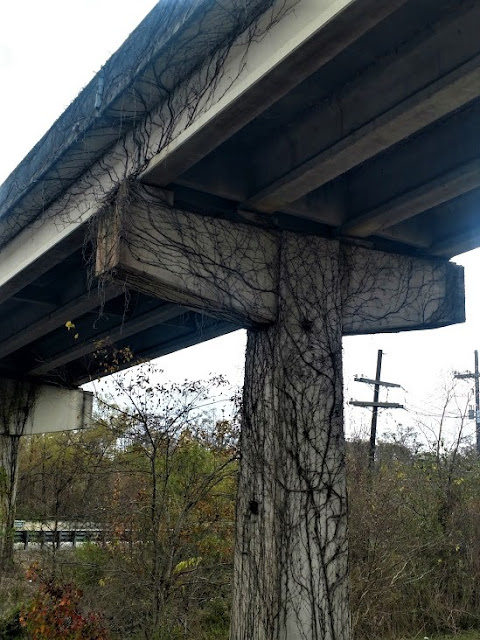 Next on the list was a geocache for Terrebonne Parish in the town of Schriever, Louisiana. The Ducros Plantation (GC28MJ2) is a 12,600 square foot home dating back to 1802. Supposedly the Ducros House is haunted. It is not certain, but there is said to have been a young child who accidentally drowned in the adjacent well nearby as well as the house being home to the natural deaths of many of the previous occupants. The most common activity reported are unexplainable sounds. Foot steps heard in the main hall by the carpenters restoring the plantation and Richard himself has heard a strange dragging noise on the upper gallery. All reports have been during the day. No one has spent a night at Ducros since the early to mid 70's. From the vantage point of the public street I couldn't get a very good photo of the house.
The last geocache for this day in Louisiana was for the Lafourche Parish at the St Joseph Cemetery (GC2V8NJ). The first burial here is that of Marie Madeleine Gaudet (1732-1801). After a half-dozen burials, this cemetery was established in 1817 on the site of the original St Joseph Church, a mission of Assumption. The Calvary-Grotto Shrine to Our Lady of Lourdes, erected in 1883, still stands near the Menard Street entrance. Several historic graves are located here. 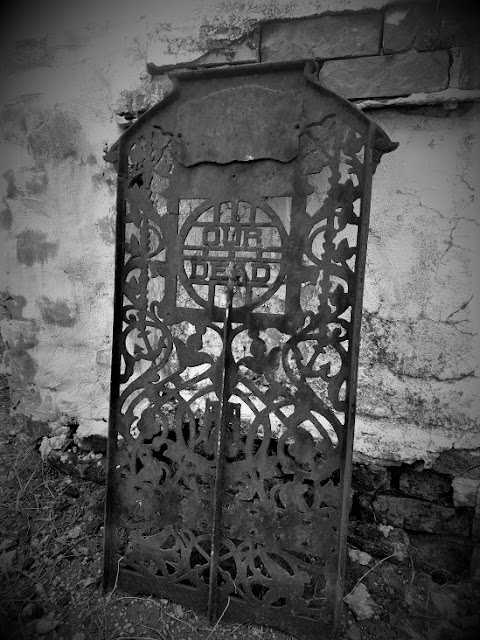 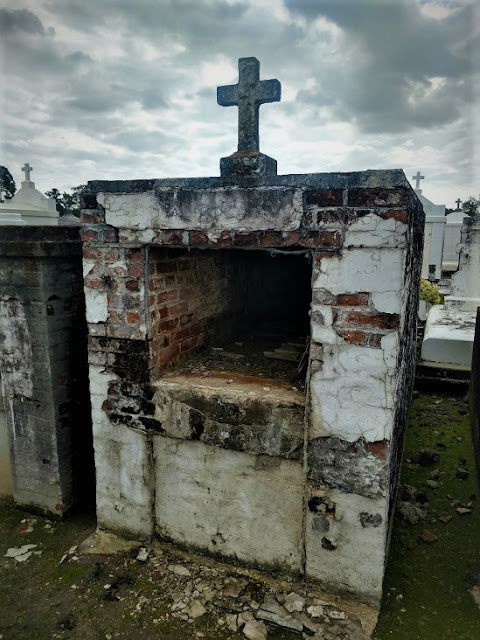 We drove all the way to Lake City, Florida the first day. Then on Christmas Eve down to Umatilla, just in time for a family get together. Later that night we checked into our hotel on Cocoa Beach, Florida. Christmas Day we awake to a beautiful view of the Atlantic Ocean. After another day with family in Merritt Island, Florida, it was time to hit the road westbound and return to Texas. 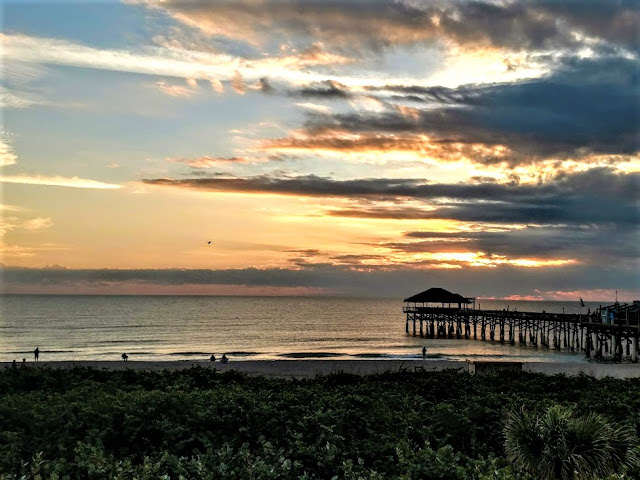 We had more time to get back to Texas so we spent more time on the backroads geocaching and picking up new counties. A couple of stops on Wednesday the 26th in Alabama with one being this huge Live Oak tree (GC7BA7T). It can be found listed on the Alabama Forestry's list of Alabama's Famous & Historic Trees. This publication states this tree was a recognized meeting place when the town of Geneva was first settled. People gathered under this tree for meetings and information of the development of the area. ﻿ ﻿The Big Oak was measured by the Eastern Native Tree Society in 2009. Measurements recorded were, CBH-22'9", Height-69' and Spread-163.5' x 154.5' making it #94 on the listing. We arrived here after sunset and it was already getting dark. That made it difficult for us to get any decent pictures. Though you can see plenty of photos on the cache page.

Thursday the 27th found us in Mississippi. We picked up several new counties in Stone Co (GC7JGP7), Amite Co (GC311DZ), and Wilkinson Co (GCP29Z). The most interesting geocache of the day was found in Centreville, MS. A virtual cache called "One For The Road" (GCJA19), it is of an old Colt .38 Revolver imbedded into the road from the days of the Works Progress Administration was constructing the original road in the 1930's. Nobody knows the real story behind the gun but there are many tales told. The most common is of a man who found his wife with another man, shot them both, and tossed the evidence into the newly poured concrete. Then there's the bank robber, another a moonshiner, and even a war protester. But we'll probably never know the true story of the revolver in the road. 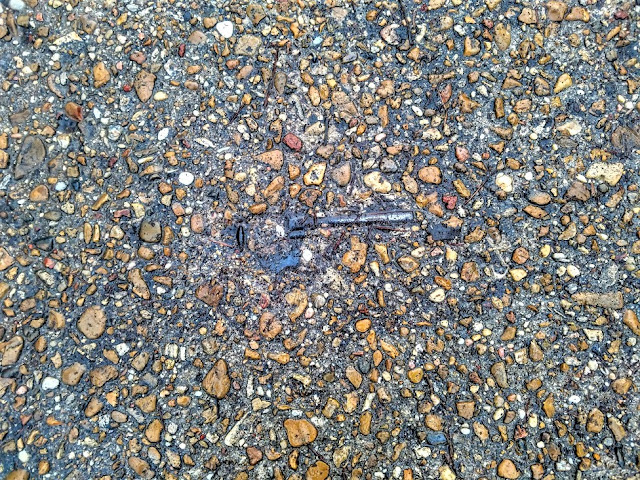 We ended the night at a hotel in Alexandria, Louisiana. After getting settled in the hotel I made a run for pizza to bring back for dinner. I passed by this place and saw the shapes in the darkness and knew we had to come back in the morning for a better look.
That begins Friday the 28th. On England Drive in Alexandria is this Memorial Park (GC3XCW6). The England Airpark was once England Airforce Base until is was closed during the Clinton administration. The A-10 Warthog was the primary fighter stationed at England, and it is prominently displayed in this awesome real life airplane display area. There are 5 aircraft here on display. This geocache also gets us the Rapides Parish as a new county. 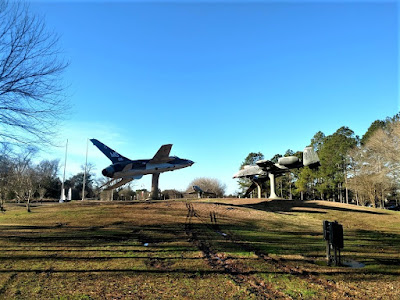 Our next stop was in Grant Parish and a town called Colfax, Louisiana. Reading the historical markers around the courthouse, the first one of interest was about the fire water. The marker reads: "The Famous Burning Well of Colfax. Visitors to this spot were once greeted with a curious site, a burning well. In 1899 a driller named L.B. Hart completed an artesian well at 1103 feet. The water was salty, and it bubbled with gas. Hart struck a match near the flow and promptly got his beard singed when the bubbles ignited. During its lifetime the well ebbed or flowed in response to the levels of the nearby Red River. With the advent of each new eruption someone would light up this unusual landmark. Thousands of tourists remember Colfax by the image of its famous burning well. Ripley once featured it in his "Believe It Or Not" as a well that spewed both fire and water. During WWII visiting soldiers would write back home describing this local wonder. In 1959, a new courthouse displaced the towns old attraction. An artificial fountain with a gas flame was erected, but it could not possibly evoke the awe of visitors as the real one had once done."
Another marker describes a dark time in the towns history. "The Colfax Riot. On this site occurred the Colfax Riot in which three white men and 150 negroes were slain. This event on April 13, 1873 marked the end of carpetbag misrule in the south." At the cemetery, an obelisk there reads: "Erected to the memory of the heroes Stephen Decature Parish, James West Hadnot, Sidney Harris who fell in the Colfax Riot fighting for white supremacy April 13, 1873." I was actually surprised this was still standing considering the political climate of modern times (GC7962B). 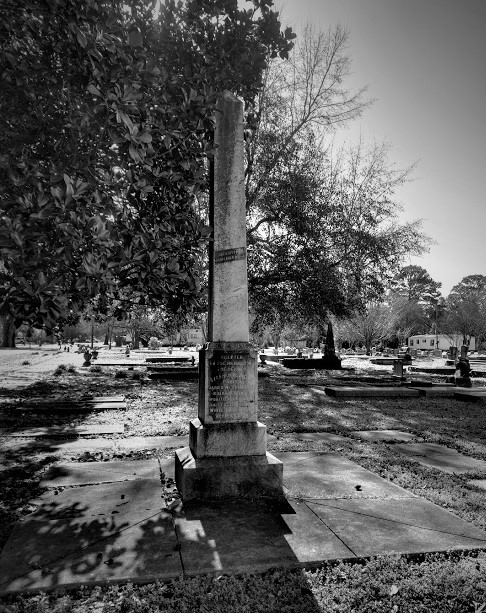 After a few more stops we finally made it back home in Killeen, Texas. A weekend to rest up from the trip before heading back to work in South Texas. Thanks for stopping by and I hope you enjoyed the roadtrip! See you next time...
Posted by Mark at 1:25 PM