YAY!! It only took me 13 YEARS to complete!! Being a Florida resident, we were traveling around in an RV and when we got to Fort Davis I remembered my sister telling me about this Geo treasure hunting game. Well our DataStorm satellite gave me coordinates wherever we were parked. So without a GPS, my son an I made 3 attempts hiking the trail before finding the cache on April 18, 2006. You can read all about that in a blog post here: http://awaywego.us/adventure_archives/04-19-06.html 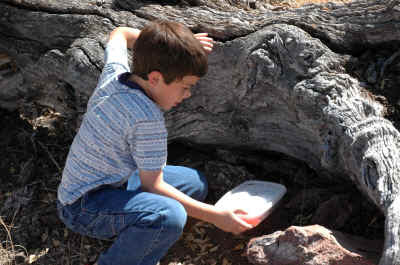 Continuing West to California, north to Alaska, east to Maine, and then back to Florida, I would not see another Texas cache until July 2007 when I became a truck driver. Picking up some caches here and there as long as I can find Big Rig friendly caches, my last Texas cache as a truck driver came in April 2010. That started a dry spell as I would not step foot in Texas again until November 2015. (That's all in my original blog linked above.)
When I first arrived back in Texas this time, my wife and I were in Jasper (East Texas) for 6 weeks until her company transferred her to Lubbock. We were there for 3 months and then transferred again to Crane for 18 months. From there she went to Killeen. My new job had me working in West Texas, then down to the Rio Grande Valley. So I pretty much covered the state! (You can read all about that in this blog.)
I had the final 3 Texas counties: Hood, Dallam and Sherman. Hood was SW of Fort Worth and just a few hours away. But Dallam and Sherman Counties were WAYYY up in the top west corner of the panhandle. We just did not have time for them on that caching run while we were in Lubbock. I knew they would be haunting me and I almost had to leave them behind.
I finished surveying the wind farm project in the Rio Grand Valley (yeah my work involves a GPS also!) on January 25th and they wanted me to start in Missouri last Monday on the 28th. YIKES! No way I can grab those unless I took the REALLY long way around. Well as luck would have it, the last minute they told me to hold off on going to Missouri. So I decided I'd better run up there quick while I have the chance before they assign me my next project location.
A couple days ago I hit the road. Going north up I-35, I stopped for gas in Alvarado, Texas. Nearby was a large cemetery with two geocaches. I found them both (GC5ZMG5, GC5QRGJ). I mean you can't pass up a cemetery cache when you're that close right!
Then I finally arrived in Hood County and Acton Cemetery. Acton had four caches, one of which was for a famous resident; Elizabeth Crockett (GC6XKHC). Acton Cemetery is also the location of Acton Historical Site which is the smallest Texas State Park. The park basically consists of the grave of Elizabeth P. Crockett (1788-1860), widow of Alamo Hero David Crockett, and two of his children. In 1911, a statue and monument were erected to her memory and made a state park. 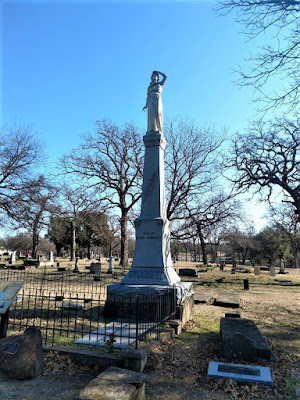 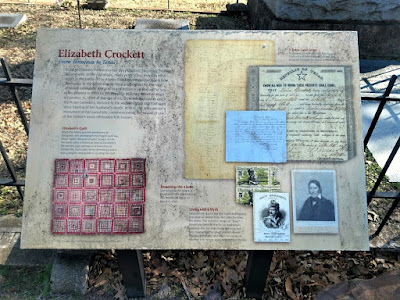 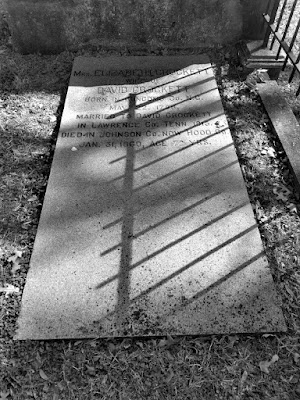 Acton (formerly called Comanche Peak) was named in 1855 by C. P. Hollis, the first merchant in town. In spite of the early name, Acton had few Comanche raids. After erecting a building for church and school, early pioneers selected this plot for a cemetery. The first person buried here was Mrs Wash Hutcheson in 1855.
A few more quick caches along the roadside before arriving up in Dalhart, Texas for the night and checking into the hotel.
Yesterday morning I'm up and out just before dawn. Dalhart has some creative caches in town and I wanted to get to them before the local muggles would hinder my search. The geocaches were called "The Valve of Life" (GC4YDEY), the "Denver and Rock Island Switch" (GC55P4B), and the "Dalhart Volunteer Fire Department" (GC58BMN). Combined they have well over 1000 visits and over 600 favorite points! And they get me one of my last two remaining counties!
Now the road to get to the tri-state corner, which I'll get to in a moment, goes into New Mexico before back into Texas. I already had that county for New Mexico, but I didn't want to pass up this cemetery. Clayton Cemetery contains the grave of "Black Jack" Ketchum (GC1KD22). Thomas Edward Ketchum (October 31, 1863 – April 26, 1901), was an ordinary cowboy and cattle driver who later turned to a life of crime. Black Jack Ketchum became one of the most famous outlaws in the region. He was captured when he single-handedly attempted to rob the same train again at the same place and in the same way that he, his brother Sam and others from the gang had robbed it just a few weeks earlier.
The train conductor, Mr. Frank Harrington, saw Tom approaching the moving train. He recognized him, grabbed a shotgun, and shot Tom in the arm, knocking him off his horse. The train continued, and the next day a posse came out and found Tom beside the tracks, badly wounded. He was transported to medical facilities at Trinidad, Colorado and his right arm had to be amputated. He was nursed back to health and then sent to Clayton, New Mexico Territory, for trial. In 1901, Black Jack was sentenced to death and hanged at Union County Court House for all his crimes and his last attempted train robbery. Black Jack's last words were: "I'll be in hell before you start breakfast, boys! Let her rip!" 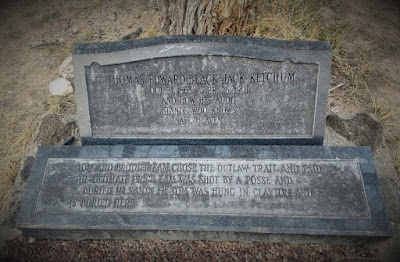 Next up is a physical cache at the NW corner of Texas bordering New Mexico only (GC2VPKZ). You don't really notice it on most maps because it's just a slight overhang of about a mile where New Mexico goes over top of Texas before bumping into Oklahoma. So you have that marker and then about a mile to the east is the tri-state marker connecting Texas, New Mexico, and Oklahoma. And that is a virtual geocache pictured below (GC9374). I just had to wear the black hat for that one! 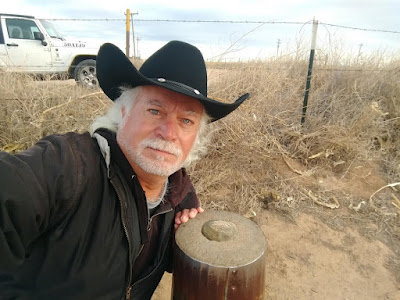 So now I'm kinda zig-zagging between Texas and Oklahoma picking off the Oklahoma border counties as well. A quick roadside cache (GC4J62V) and a cemetery cache (GC146NC) for Cimarron County. Then I dive down into Sherman County, Texas for my final of the 254 Texas counties (GC4JYTD)! WOHOO!! My second completed state and it ONLY took 13 years to do so! LOL
Picking up seven more cemeteries and two quick roadside caches in Oklahoma before I get to the Shattuck Windmill Museum virtual geocache (GCGBM4). There are windmills of all kinds dating back to the 1800's. A whole lot smaller than the 300' turbines of today! 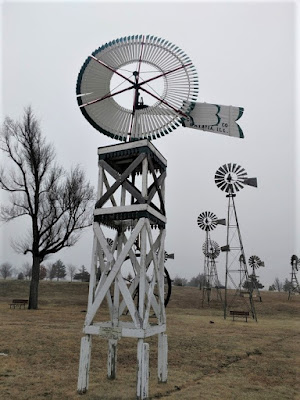 A few more quick caches yesterday after that and I found the nearest hotel just as it was getting dark to stretch out and relax.
This morning I grabbed a cache (GCMHHX) here in Altus, Oklahoma for Jackson County before crossing the border into Texas. Continuing southbound on US-281 towards Killeen, TX, I spotted this world's largest rocking chair and a virtual cache (GCGYEB). 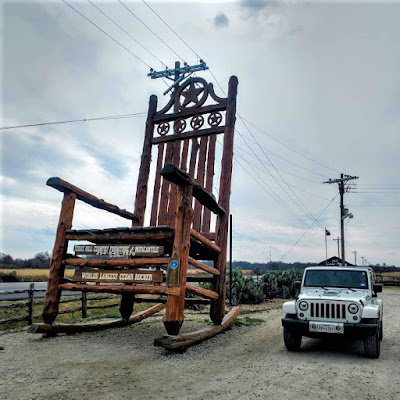 One more geocache to show you on my drive back home today. This simple bird house looking geocache was easy to find (GC6Q8PT). The tricky park was getting it open to sign the log. After a few minutes I figured it out this gadget cache and had my hands on the prize. 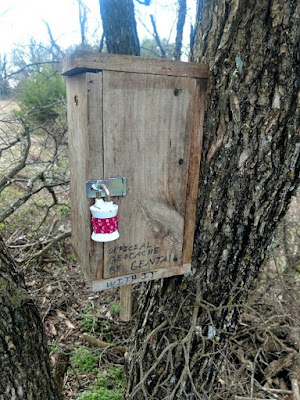 So I completed my Texas Counties on February 5th, 2019! YAY!! That brings my total counties to 1024 with Texas and Florida completed. Hopefully by years end my job transfers me to a solar project in Virginia where I can work on another state. Stay tuned for what's coming next... 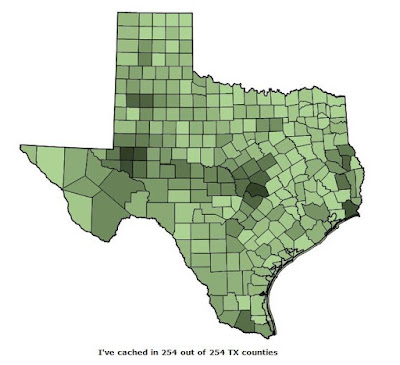