Rise and shine roadtrippers, geocachers, travelers, and friends. Today is Day 2 of our 3-day Memorial Day weekend roadtrip across North Carolina. (Click here for Day 1) We gotta lot of miles west into the mountains to get to today. And hopefully round the corner back east to start the return trip for tomorrow. So grab a cup of coffee, climb into the GeoJeep and let's get going...
I grab breakfast in the lobby and check out of the hotel at the crack of dawn. Before driving away, I first grab the geocache (GCW6C1) in the parking lot to claim a find for Forsyth County. It wasn't a planned cache, but when there's a geocache so close it's hard to just leave it behind.
Driving west into Yadkin County, I pass through East Bend headed for the Mt Olympus Greek Restaurant for my next geocache (GC42WQF). What should have been a quick parking lot find turned into 15 minutes spent for a DNF. Being half Greek, I really wanted to find this one. But no luck this morning. I still need the county so I drive another mile down the road for another quick roadside cache and find that one (GC3YNZM).
On the way to my next geocache, driving the backroads through the country, I spot this old truck sitting off to the side of this gated driveway. Then I notice the skeleton sitting inside and just knew I had to turn around for a photo. As I'm taking the photo, I see the sign and realized that I'm getting my picture taken also. 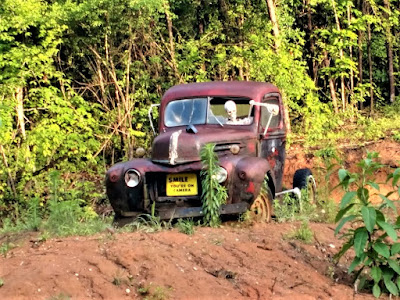 Driving north on US-52 into Surry County, I see my next goal. As a fan of "The Andy Griffith Show" I wanted to return to Pilot Mountain, also known as Mt Pilot on the TV show. It's been nearly 14 years since I last visited this area with my sons and I hadn't yet started geocaching. There were two geocaches: "This Way to Pilot Mountain" (GC322YP) near the state park entrance and the "Pilot Mountain" Earthcache (GC1195C) up near the observation deck. I drove up the mountain to the parking area and made the short hike to the observation deck. After some photos I gathered the information I needed to claim a find for the earthcache.
Instead of continuing on up to Mayberry (Mt Airy), since I've been there before, I thought I would check out less popular historical sites. Such as a virtual geocache at the grave of the Bunker Brothers (GCF338). I know... you're probably thinking "Who are the Bunker Brothers?" More commonly known as the Siamese Twins, Chang and Eng were born in 1811 in what used to be called Siam, now Thailand.
In 1829, the twins left Siam to begin touring Europe and the US. They were very popular and drew large crowds in "freak shows" where the twins exhibited various feats of strength and dexterity. In 1839 the brothers quit touring, purchased 150 acres in Traphill, became American citizens and choose the last name of Bunker in honor of a woman they met and admired in New York. In 1845 they purchased 650 acres here in Surry County. A few years later the twins married two sisters, Sallie and Adelaide Yates. 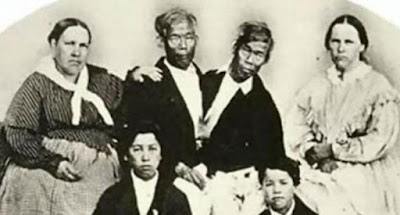 Within 9 months and one week of the marriage each sister had given birth to a child. Over the years 19 more children would be born to the sisters. Over time, the two sisters began to fight and would often put Chang and Eng in the middle of their fights. It was decided that the family would split and two houses were built. The two houses were about two miles apart and the twins would spend three days in one house with Sallie and then move in with Adelaide for three days before starting the cycle all over.
Chang passed away on Jan 17, 1874. There were several theories and autopsies performed as to why Eng died, some saying within 30 minutes and others up to two hours. It is often said that Eng was scared to death of the thoughts of his brother being dead and have attributed his death to shock. Others concluding that blood continued transferring from Eng to Chang, but obviously not returning. They were then buried in the lawn at Chang’s house and in the 1920’s were moved to the church that they are at now, which the brothers had donated the land for. 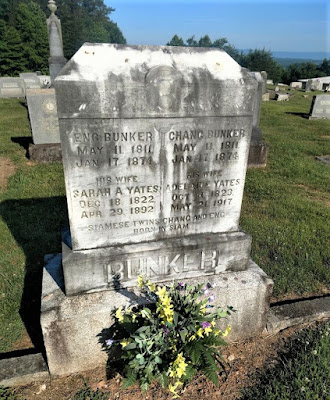 The White Plains Baptist Church was established in 1856 on land donated by Chang and Eng who went to church there. The twins, their wives, and 40 other Bunker's are buried there in the cemetery, plus many other descendants under various other names.
One more geocache for Surry County was at the Dix Freeman Homeplace (GC4P3ER), a favorite location for Round Peak musicians to gather to play their old-time music and hold weekly square dances. Furniture would be moved, sometimes even outdoors, to make room for two or more groups of square dancers in the two room cabin. String musicians, mostly fiddle and banjo players, would stand in the doorways and play their music for the dancers.
“Breaking up Christmas,” usually held after harvest time between Christmas and the New Year, was a time for festivities including music, dancing, socializing and lots and lots of food! Families in this Round Peak area would begin at the Freeman home and then travel to a different cabin every night. Dix Freeman, 1908 – 1995, was an oldtime claw-hammer banjo player who learned to play when he was 10 years old. He credits learning most of his banjo tunes from the legendary Charlie Lowe. Dix played with the Pine Ridge Boys and was a collector of banjos and fiddles, amassing over 237 instruments.
Round Peak Mountain, eleven miles east of here, lends its name to the signature style of old-time fiddle and banjo music that developed in its shadow. The relative isolation of the community and difficulty of travel during most of its history helped to ensure that a limited selection of songs shared and composed by residents would eventually became the core of today’s “Round Peak” music. Round Peak music is characterized by a close interplay between the fiddle and the “fretless” banjo with a driving sound that developed as the musicians played for flat foot and square dancers at frequent social gatherings such as corn shuckings, barn raisings, house parties, and an annual local party tradition referred to as "Breaking Up Christmas." 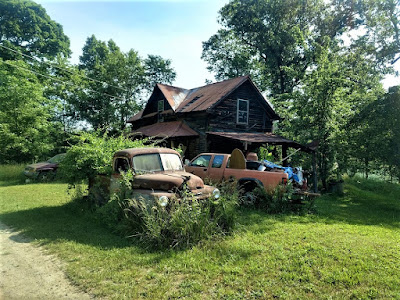 Moving right along and hopefully picking up the pace. I found a quick roadside geocache in Alleghany County (GC2RTZF) before getting onto the Blue Ridge Parkway. Then quick earthcaches at the Stone Mountain Overlook (GC77NWW) and the Air Bellows Gap Overlook (GC6TP4K). 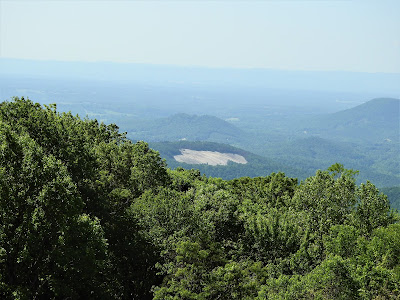 One more stop further down the parkway exiting at mile marker 248 was for a cache (GC47JGV) at this Jail / Wedding Chapel in Laurel Springs. Gives new meaning to the term "shotgun wedding" I suppose. Doing a little research, I found that that wasn't ever a real jail or chapel. Just painted up that way for a roadside attraction and photo opp. Unfortunately it was a busy area off the parkway with a restaurant and bar across the street and a motel and campground nearby. There were a lot of muggles nearby and made it difficult to search for the cache. 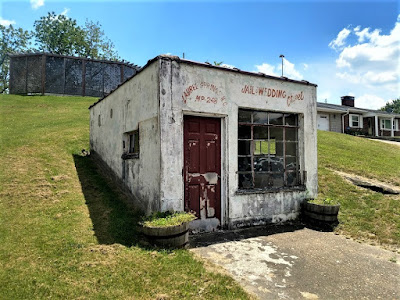 Driving down to Glendale Springs in Ashe County, I stop for a multi-cache. A multi-cache is where you have to go to multiple stages getting clues to the final coordinates. They can be as few as a simple 2-stage cache to as many as you want. I think the longest I've found was a 7- or 8-stage multi-cache.
This one was called "Re-Visit the Past" (GCK8FB). In the late 1800’s Episcopal missionaries came to this region of the Blue Ridge Mountains to provide schooling and medical help for the people living there. Holy Trinity Episcopal Church was built in Glendale Springs in 1901. After the church was officially closed in 1946, members began removing the furnishings and taking them home. For over 30 years the church sat deserted and neglected. In 1972, Rev. Faulton Hodge became priest-in-charge at St. Mary’s Episcopal Church in nearby West Jefferson. In the late 1970’s, he started a campaign to restore Holy Trinity. As work progressed on the building, the original furnishings were returned. Today the church has its original pews, pump organ, Altar, and candle stands.
There's also a cemetery on the property as well that has over 200 interments and is still in use today. According to the findagrave website, the oldest dates back to 1879. After gathering clues from the front and cemetery area, The final cache location was around back by this large statue. 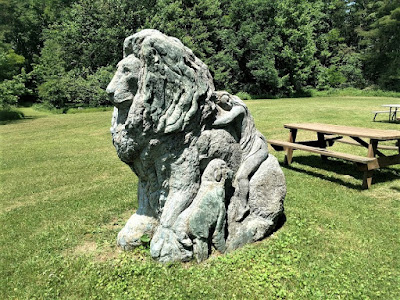 Then there is the "Fast Find" cache (GC5QYT7) in Watauga County followed by another quick roadside stop at "Fall Creek" guardrail cache (GC29P3N) in Wilkes County. Had to take a few pictures at the creek though. 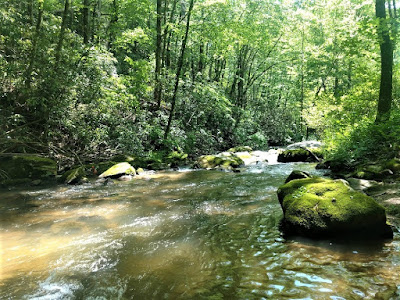 Getting back to the Blue Ridge Parkway southbound, I stop at the Green Mountain Overlook for another earthcache (GC6YHXZ) in Caldwell County and a few photos. I decided to include the GeoJeep in one of them. 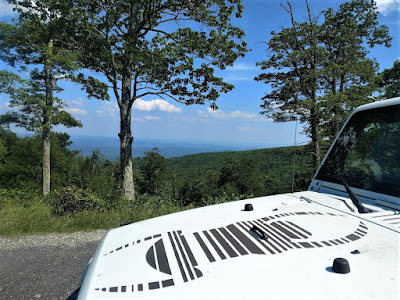 Moving down into Avery County there was the Boulderdash Earthcache (GC700KY)... 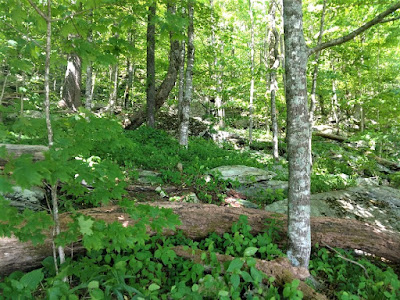 ...followed just down the road by the Artic Window Peak earthcache (GC21N6F) at the Yonahlossee Overlook. 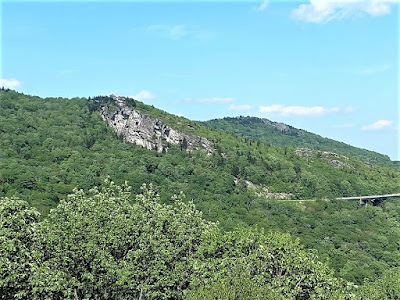 My next stop was down in McDowell County at a cache called Restful River (GC6KHW5). This cache was near the bridge overpass for the North Fork Catawba River and the Honeycutt Creek. Down along the banks were a dozen or more of these butterflies. Every now and then they'd stop long enough for me to get a photo. 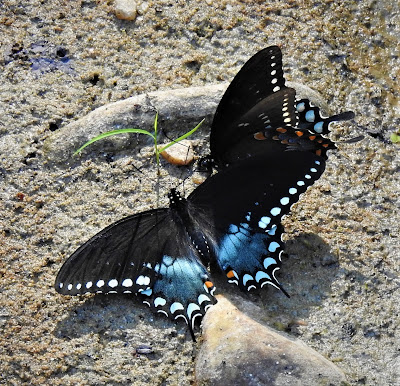 And then there's the "Be In Three Places At Once" cache (GC6HE12). Louise's Rock House Restaurant was formerly known as the Linville Falls Tavern and is on the National Register of Historic Places. Built in 1936 by stone mason Lenoir Franklin and owned by C.J. Howell, the tavern was built right where the intersection of three counties converge. The Avery, Burke, and McDowell counties all come together near the fireplace. With the layout of the restaurant, your food is cooked in Avery County, picked up by the wait staff in Burke County, and then served to you in McDowell County. Even though the restaurant was a little busy, the cache was hidden enough by the wall that I was able to quickly retrieve it without being seen. I just forgot to take photos.
Well it was starting to get late in the day. Looks like I'm gonna have to skip a few of the counties still to west and round the corner back towards Blounts Bay. So I head south into Rutherford County and the town of Forest City. There I get a quick parking lot cache (GC4H1H9) to claim that county. Now driving on US-74 eastbound, another quick parking lot cache in Cleveland County (GC16C21). Turning north on US-321 for a park and grab in Lincoln County (GC53CBQ).
Posted by Mark at 5:31 PM