So today is Day 3 and the last day of my holiday weekend roadtrip geocaching around North Carolina to try and complete my caching county map. Unfortunately though, like I said in Day 2's blog, I had to turn the corner and start heading east before I was able to get all the counties. But I still have more to get to today as I travel east along the south-central part of North Carolina.
Let's hit the backroads and drive through North Carolina history. The passenger seat is open on the GeoJeep. Climb in and see what we can find... 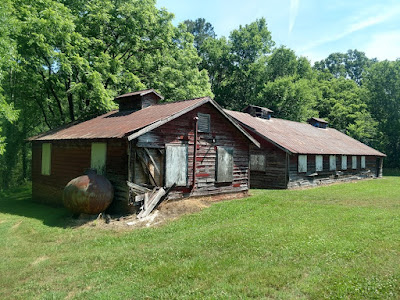 After checking out of the hotel bright and early this morning, I drove up to Burke County for my first geocache (GC6GJMA). This one was hidden by a geocacher outside her own house. Problem was that she moved away and it doesn't look like the house has been occupied in a while. Probably won't last much longer.
Moving right along into Alexander County for a quick parking lot cache at a grocery store (GC7MF94). Going east on I-40 into Davie County, I exit on US-64 to the town of Mocksville. I find the quick cache (GC467NN) near the fire station and keep going.
Entering the town of Lexington in Davidson County, I stop in the town square for a look back into history. The name Lexington was given to a crossroads settlement that consisted of a store, a tavern, and a few houses in 1775 shortly after the first skirmish of the Revolutionary War in Lexington, Massachusetts. The town was officially incorporated in 1828. The first Davidson County court house was completed in 1858, and was the only masonry building in the county at that time. The courthouse was used as barracks for Yankee soldiers in the civil war during which was damaged by fire in 1865, and rebuilt in 1867. 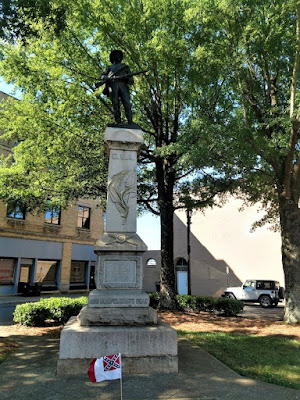 Lexington is also known for its BBQ (GC6C85). North Carolina has a long history regarding barbecue. The Spanish brought hogs to the Americas in the 1600's. As the pigs took over, pork became the meat of choice. Over time, the barbecue methods from around North Carolina converged into the style that’s known today as Eastern-style barbecue, a thin tangy sauce made with vinegar and red pepper flakes. Once the meat is smoky and tender, it’s chopped up and mixed with more of the vinegar sauce. Eastern-style barbecue is served by the plate or on a bun, usually accompanied by white cabbage and mayonnaise slaw. This is the original style of North Carolina bbq.
Sometime around World War I, an East-West split started to happen in the towns and cities of the Piedmont region west of Raleigh. There, pitmasters started using only the shoulder of the pig and vendors started adding ketchup or tomato paste to the traditional vinegar sauce. The style grew in popularity throughout the Piedmont region. It especially took hold in Lexington, which became the center point for Western-style barbecue. Barbecue is big in Lexington. The town of just under 20,000 hosts an annual barbecue festival that draws upwards of 175,000 attendees. 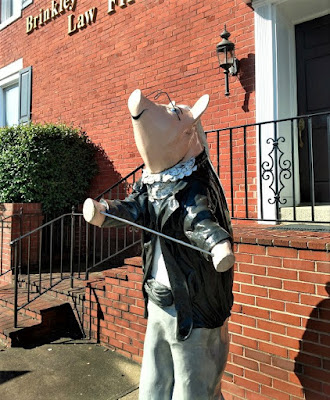 One more quick roadside geocache (GC46YJ8) in Davidson County at a historical marker for the Yadkin College which opened in 1856. It began as the Yadkin Institute, a high school for young men by the Methodist Church. It was re-chartered by North Carolina as Yadkin College in 1861.
Then followed by a quick roadside geocache (GC1V14A) in Rowan County.
Moving south into Stanly County was another historic old school building (GC15ENE), pictured at the top of this page and the next two. Pfeiffer University is a private university located in Misenheimer, North Carolina, established in 1885. The school first began its operation on the edge of Hudson, NC and was called Oberlin School, and was later endowed by Mrs. Mary P. Mitchell and was named in her honor as the Mitchell School. A fire destroyed the original school in 1907, and it was then moved to Lenoir. The new location proved to be inadequate and was relocated in 1910, to Misenheimer. 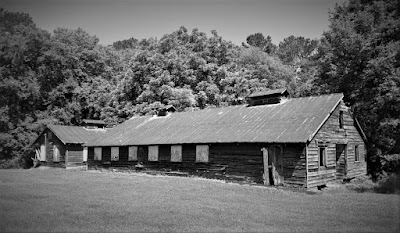 The Mitchell School began awarding high school diplomas in 1913, and began offering junior college classes in 1928. In 1934, the Pfeiffer family of New York City, gave several generous financial gifts to the school. The school changed its name to Pfeiffer Junior College, after it was accredited the same year. In the 1950's, the school began offering senior level college courses, and was then accredited as a four-year college in 1960. In 1996, the college received university status, as Pfeiffer University. 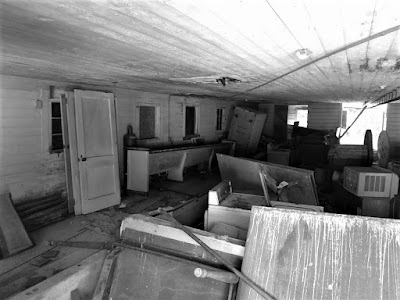 On the way to my next set of geocaches I passed through Albemarle, NC. One of those always interesting roadside attractions was spotted outside Jerry's Automotive. A shortened VW Bus with the monster head and arm sticking out that reminded me of the old Ed Roth or Rat Fink CARtoon drawings. I had to stop for a photo. 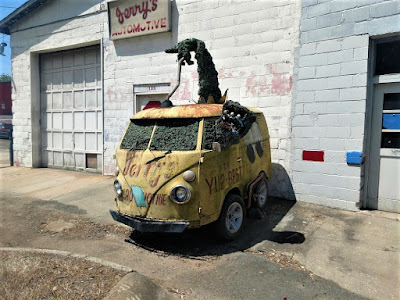 My next two geocaches were also quick roadside stops, one in Montgomery County (GC1M50J) and the other in Union County (GC82RBK).
Driving down to my next geocache, I passed by this old abandoned house. It looked like it was once a nice home. I wonder who once lived here and why they abandoned such a nice house. It's a shame it's just falling apart. 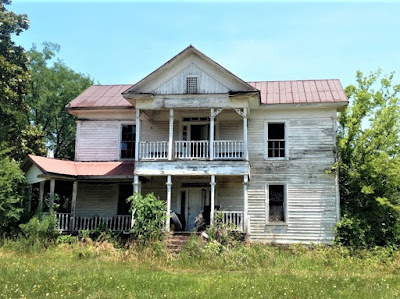 The next geocache (GC4JA4H) and county comes with a ghost story. The Ghosts of Indian Rock In Anson County, about 3 miles northeast of Wadesboro there's a small bridge crossing a creek. Most people drive across the bridge without a thought of what lurks nearby, but the locals know. They know it as Indian Rock. Near the creek known as Gould's Fork Creek there is a cave that was carved by Catawba Indians long before the white man settled in Anson County. But it's what happens here that has the locals spooked. That's all I'll share with you. You can read "the rest of the story..." over on the geocache page.
Moving over into Richmond County, I had two virtual geocaches on my to-do list. "Justice Rolls Down" (GCG67R) was the virtual located in the town of Rockingham. Outside the county courthouse were three historical markers and a monument. The historical markers were for a Brigadier General, a Governor, and a U.S. Congressman. The monument honors the county's veterans who served. 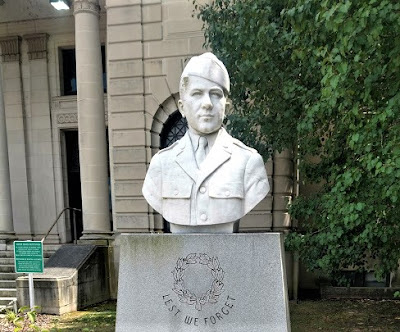 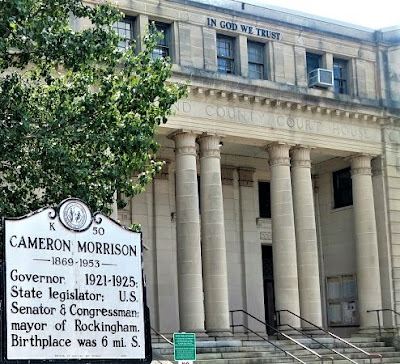 The next virtual geocache (GCG67V) was located in the town of Hamlet, NC. The first building constructed on Main Street by E. A. Lackey in 1901. It once was Carsons Drugs, Hamlet Pharmacy, and then Birmingham Drug which remained in business for over 50 years until 2019. During WWII, soldiers stayed in the rooms upstairs while waiting to board their trains. In 1990 the movie Billy Bathgate was filmed here and this was used as the hotel and restaurant in the movie. 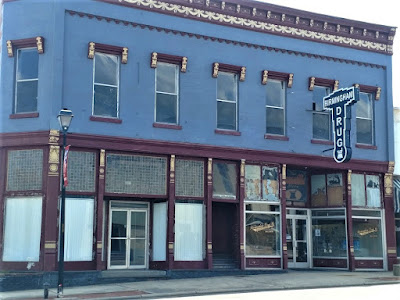 Across the street from the historic train depot was the Tornado Building. I thought it had something to do with the weather. After some research for this blog, I discovered it to be a railroad museum.
The Tornado was the first steam engine locomotive in North Carolina. Originally built in 1839 by D.J. Burr & Co. of Richmond, Virginia, the Tornado was classified as a 4-2-0 steam engine locomotive. The numbers stood for four leading wheels, two driving wheels and no trailing wheels and a total length of 50 feet including tender and box car. It was one of four locomotives delivered to the Raleigh & Gaston Railroad, the others being the Tempest, Volcano and Whirlwind.
Weighing in at six and a half tons, the Tornado was on the light side by most locomotive standards; however she pulled thirty loaded cars and routinely hauled up to 160 tons of freight on 50-mile runs between the towns of Henderson and Gaston, North Carolina. In 1840, the Tornado became the first steam locomotive to reach the state capital of North Carolina on the Raleigh & Gaston Railroad, where she arrived to gawking crowds of residents.
In the spring of 1865, the Union Army captured the Tornado when they took the North Carolina Railroad between Goldsborough and Raleigh. After much use and a gradual phase out of this model in favor of the newer 4-4-0 models, this Tornado replica was originally rebuilt in 1892 for the Raleigh Centennial Exposition. It was featured in the Great Centennial Celebration parade in October of that same year. It arrived in the Town of Hamlet in 1950 and was again fully-restored with North Carolina DOT funds between the years of 2007-2009.
The building in which it is now housed was specially-created to accommodate the Tornado. The structure also houses a 1927 Model-T, a 1930 Model-A Ford and a 1949 fire engine. Now I wish I would have checked to see if it was open so I could go inside. 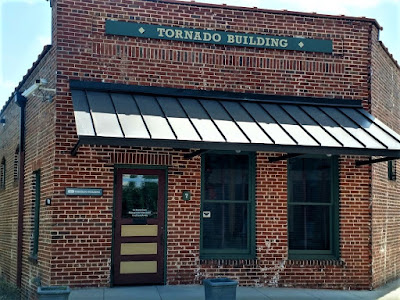 In the late 1800's, John Shortridge established a woolen and saw mill along Marks Creek in the sand hills of North Carolina. In 1879, a railroad running from Wilmington passed through the area that would become Hamlet to the Pee Dee River, where it connected to a line running to Charlotte. Another railroad was being built from Raleigh through to Augusta; it was through the influence of early residents that these tracks also crossed through Hamlet.
The Hamlet depot, the only Victorian Queen Anne style station in North Carolina, was built in 1900 for the Seaboard Air Line Railroad as both a passenger station and division headquarters. This two-story station was originally constructed at the crossing of the Raleigh and Augusta Air Line and Central Carolina Railways. Hamlet grew with the railroad, as it provided hospitality for travelers passing from New York to Florida. By 1936, Hamlet was dubbed the “Hub of the Seaboard,” with five Seaboard Air Line Railroad lines leading out from the city and about 30 passenger train departures each day. Freight trains still come to Hamlet for maintenance at the CSX Transportation Maintenance Shops. 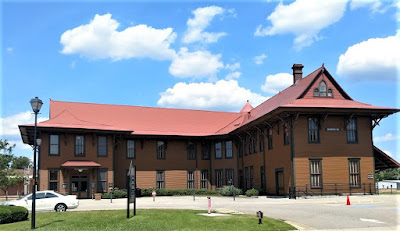 Running out of time, I start making my way back as quickly as possible. In Moore County I find a quick roadside geocache along US-1 (GC1WYKK), one in Scotland County (GC1W6AA), another in Hoke County (GC3WBFA), Lee County (GC2QJFE), and finally Chatham County (GC7TCRR).
That is all the time I had for this weekend. Unfortunately, I couldn't make it as far west as I wanted too and had to leave those counties for another roadtrip. The other two counties in the middle, well I'm not exactly sure how I missed those. Still a good trip since just a few weeks ago when I first arrived in North Carolina I think I only had about 24-25 counties completed. And I still have some time left here. Maybe I can get those on the way back to Texas.