2019-06-18: Roadtrip Back to Texas Day 1 in NC and SC, Finding an Abandoned Racetrack, Farmville, a Historic Survey Marker and a 9-11 Memorial

Well it's that time again. My work on this project in North Carolina is done. Time for a roadtrip back to Texas. Only this time it's in North Central Texas, about an hour north of Abilene. So that means I'll be hitting the backroads westbound again looking for geocaches in new counties, finding historical places and stopping for roadside attractions. The passenger seat in the GeoJeep is open. Hop on in and let's go for a ride... 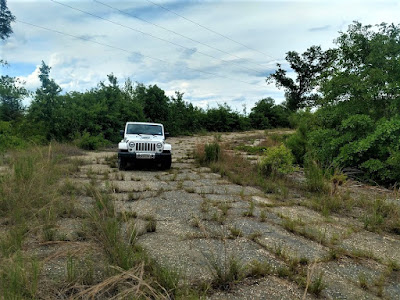 I get out of work a little early today, run by the house to pack everything into the GeoJeep, and head west on US-264. Driving around Greenville to the other side a few miles, I see this huge water tower for the town of Farmville, NC. I stopped to take a photo and send it to my wife. She used to play Farmville a lot. I told her that the town really does exist but it's in shambles! She needs to get playing the game again, plant and harvest the crops, feed the animals, and get this place back growing again. She got a good chuckle out of it! 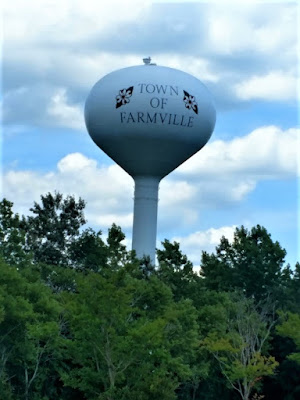 Arriving at my first new county down in South Carolina in a town called Cheraw. The cache was a quick parking lot LPC find for Chesterfield County (GC6807X). This wasn't my first choice to find, but a plan B find for the county credit.
My original geocache, and one of the reasons I like geocaching, brought me to this long abandoned racetrack just down the road by the airport. Like several others before me, I could not find the geocache. (it has since been archived) But I did get to find this piece of NASCAR history. Built by NASCAR legend Jimmy Ingram, the race track was in operation from 1955 through 1968. It started out as a quarter-mile dirt track. Sometime in the 1960's, it was paved and expanded to 3/8 of a mile. Now the only passing and overtaking happening is by time and nature. I did get a quick shot with the GeoJeep at the top of the page. 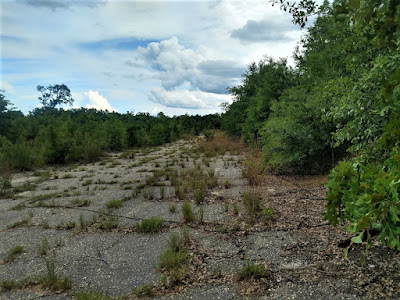 Next up was a virtual geocache called "Run For The Border" (GCE55). As a surveyor myself, I like finding these old survey stone markers. This one was placed in 1813 to mark the line between North and South Carolina. Originally surveyed in 1764, this stone was placed because of the uncertainty of the location of the Salisbury Road which had served as the north-south boundary from the western terminus of the state line. It was resurveyed again in 1934, found to be accurate, and the round Geodetic Survey Disc was attached to the stone. Not too far away is a traditional geocache called "North Corner" (GC333HN) and I make a stop and found that one also. 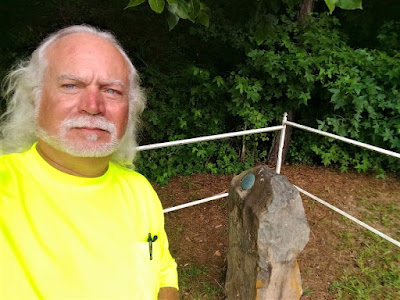 The next county on my list was Chester County, South Carolina. There I made two quick park and grab cache finds (GC5MD92, GC5VGFZ). On the way to my next county and geocache, I passed through this small town called Lockhart. I grew up in a small town called Lockhart in Florida. Back in Texas, I also encountered another Lockhart which they're famous for their BBQ. So I found a place that would make a good selfie by the town square and Liberty Bell replica. 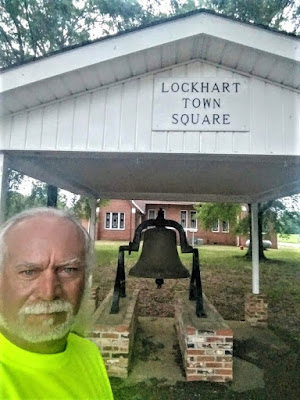 My next cache over in Union County was at this highway 9-11 memorial made of painted rocks (GC1410J). A quick find for the county and a nice GeoJeep photo opp too! 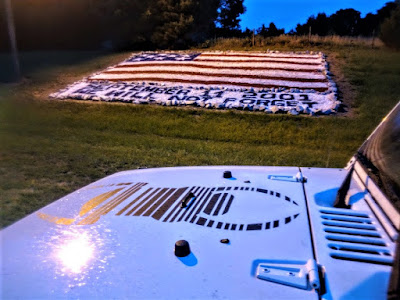 A short adventure for today, but had to work until 3:00. Now it's almost 10PM and I find a hotel for the night in Spartanburg, SC. Tomorrow I can get started out bright and early. There's more counties to pick up, more geocaches to be found, and lots of history and cool sites to see. I hope you'll be back too. The passenger seat is always open. See you soon...
Posted by Mark at 8:36 AM