2019-09-02: Back to West Texas and Finding Geocaches in San Saba, an Old Suspension Bridge, Cemeteries, and a Funny Story

Ugh.. Back to West Texas Again!! Well my time in North Central Texas is over. I had plenty more places to explore and geocaches to find. But I gotta go where the job tells me to go. They needed a surveyor to start a new solar project in McCamey, TX, so I trained my replacement at the wind farm in Gilliland.
I think I have found almost every geocache between Killeen and McCamey, so I'll probably be driving WAY outta route to find some caches and places to explore. So who's ready for a roadtrip? Hop in the GeoJeep and let's get going. 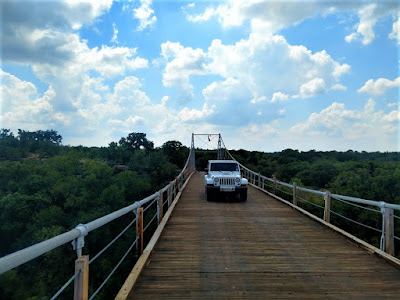 My first stop is taking the rural FM 580 backroad west of Lampasas. Wasn't anything to see here. Just a backroads geocache out in the middle of nowhere (GC15R7W).
Arriving in San Saba, Texas to the Welcome sign on the south side of town, I was greeted by a unique cache container (GC729ET). This cleverly disguised micro cache might be easily skipped if attempting at night. 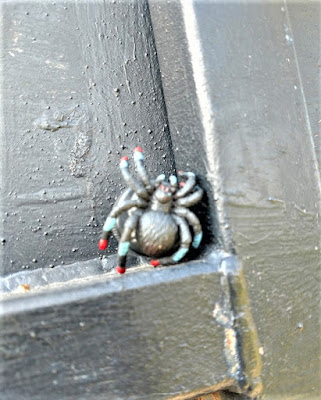 One block off the main street through town is this 100 year old Methodist Church and my next geocache (GC7285N). I had been wanting to get this one the previous times passing through San Saba, but it is usually a Sunday and the busiest day of the week for this building. On this morning there were still some folks around front (so no photos), but in back where the cache was it was deserted. Found it in short order and continued on my way.
One more stop for the San Saba Cemetery (GC727WY). Previously the Odd Fellows Cemetery, it is located on 17 acres of land about 800 yards north of old town San Saba. On April 18, 1883, the San Saba Chapter of the Independent Order of Odd Fellows (IDOF) purchased 10 acres of this land from J.J. Stockbridge to establish a cemetery, which they maintained for 45 years. On April 3, 1929, the newly incorporated San Saba Cemetery Association purchased the cemetery for $1.00 and an additional 7 acres from Mrs. May Holman, also for $1.00. In 1935 burials from San Saba's earliest City Cemetery, now Rogan Field, were reinterred here.
Once again on the rural backroads north of San Saba, county road 500, I stopped at this cross on the side of the road. Eighteen year old David McBride is buried in the above cemetery, but I can only assume that this roadside memorial was the location where his life was taken so soon. 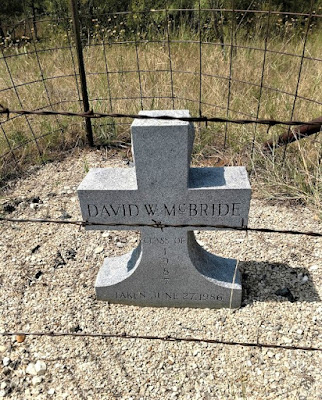 Continuing up the rural backroads on the way to my next trio of caches, I saw all these beautiful purple plants. They look like mini-pineapples, but very sharp prickly thorns all over them. After taking some photos, I drove on. 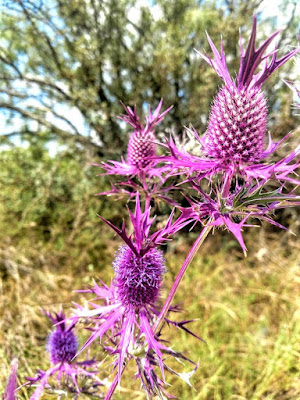 The next three geocaches were all in the vicinity of the Regency Suspension Bridge. (GC1A7VT, GC1A1DW, GC1A1DM) Built in 1939 mostly by hand and restored 60 years later in 1999, the Regency Suspension Bridge spans 325 feet from tower to tower. The towers rise 30 feet above the bridge floor, which is 16 feet wide. Engineers list the overall length at 403 feet. Locally known as "The Swinging Bridge", it connects San Saba and Mills Counties across the Colorado River. On December 29, 2003, vandals set the wood surface on fire burning a whole through some of the 4x12 inch planks. Thankfully the bridge was once again repaired. After enjoying the views and taking lots of photos, I was able to find 2 of the 3 geocaches. (08-09-2021 UPDATE: I'm being informed that vandals have struck again and set the bridge on fire and has been closed to traffic.) 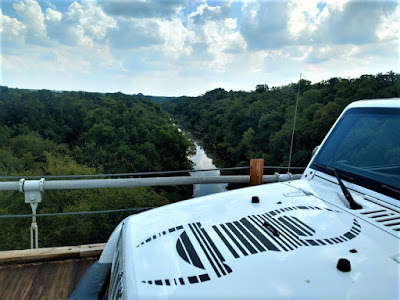 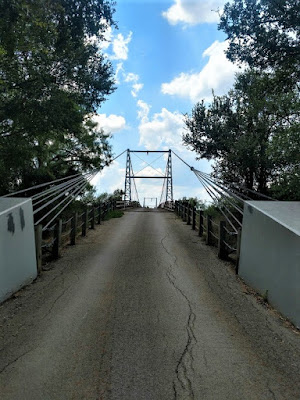 Working my way through the maze of gravel roads back south trying to find civilization again, I spotted the Mesquite Cemetery. This small yet maintained cemetery dates back to 1885 and has less than 100 burials. I didn't have it saved in my phone so there wasn't a geocache already here. And unfortunately I didn't have any ready to hide, so it looks like another drive up through here in the future is in store. 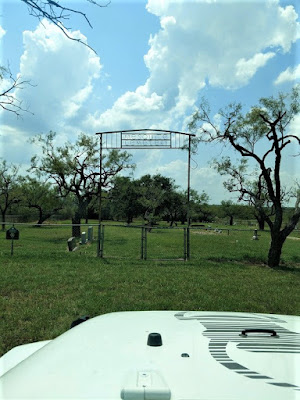 My last stop for the day was a geocache (GC2QDCK) along US-190 between Fort McKavett and Eldorado at the intersection of Hwy 2084. More commonly known as the "Toe Nail Trail." Now I've found a lot of references to the "Toe Nail Trail" including a historical marker for Christoval, TX. But as far as a history as to it's name, well there is a ranch called the Toe Nail Ranch. Other than that, all I got to share is what is written on the geocache page. And it's pretty good, so I'm just gonna give it to you word for word. So kudos to cacher Tres Compadres for the description:
"Howdy Pardner,

"My moniker is Handy Hank. But ah answer to most anything, ‘specially when an invitation to share some grub is involved.

"Welcome to Toe Nail Trail. In the late 1880’s, folks a-traveling’ up to Christoval from Scabtown-- That’s what they called that collection of brothels and saloons that “serviced” Fort McKavett ‘afore it became respectable-like and re-named itself Fort McKavett -- had to follow a trail fifteen miles north of the old fort through the Toe Nail Ranch. The ranch, by the way, was named “cuz it angled in a funny way across the corner of the county. Them people in Austin done give the trail a number. Don’t rightly recall what it is. Nothing interesting about a number. Pshaw, most folks still call it Toe Nail Trail and iffen ya ask for it by that ridiculous number, you likely to get a blank stare. Lotta folks have traveled this route over the years and still do. Give ‘em a wave iffen you see some while yer out thar.

"Now, I’ll be helping you with this here Challenge that the Tres Compadres done cooked up. Well, sorta helping you. You’ll find me sharing tidbits of information about the Old West and some of the characters that populated these parts. Pay close attention to what I say, that information might just come in handy along the way. Ya’ll know how that devilish Mommio likes to hide crucial bits and pieces of information from you. And this challenge ain’t no different from her past scribblings. And then there are those clever caches that Mermaid and Horny Toad are known for, expect more of them to show up along the trail.

"Yer journey along this trail from one end t’other, will bring you to all the caches them folks placed for yer entertainment. Ya’ll have to take a side-trip or two down some dirt tracks that lead offen the trail but mostly ya’ll find yerself on the main road. Hopefully, ya won’t be a-meeting up with any o’ the ghosts o’ some o’ the characters that trekked up and down the old trace but keep a sharp eye out for ‘em. A goodly number of them were purty disreputable.

"Ya’ll be careful out there."
Well I hope you got a chuckle out of that one. IF you can decipher the accent on some of the words. That was my adventure for this day. I hope to see you again soon.
Posted by Mark at 8:04 AM