Welcome back to another episode of my Sunday 300+ mile drive from Central to North Texas while Geocaching through ghost towns, cemeteries, abandoned places, and history. Oh, and a great "Santa Claus Bank Robbery" story too! The passenger seat of the GeoJeep is open so climb aboard and let's go for a backroads roadtrip! 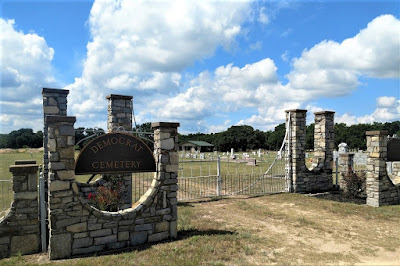 My first stop was just down the road and a quick park and grab cache (GC288JF). Then another quick stop in the old downtown of Lampasas (GC23Z9K). Good thing it's a Sunday morning cause this one is probably harder during the week with activity of muggles around and about. Driving north on US-183, I stopped for two geocaches at the Goldthwaite City Park (GC7VARK, GCTPY1).
Next up was the ghost town of Democrat Community (GC333E9). From the historical marker: "Although settlement of this area dates to 1878, this graveyard was not established until the turn of the 20th century. The earliest documented grave is that of one-year-old Lee Ella Deen, daughter of W. F. and M. L. Deen, who died in November 1904. In February 1905, J. L. Chancellor deeded the surrounding three acres of land to the citizens of the Democrat and Rock Springs communities for use as a public burial ground. Among the early graves in the cemetery are those of a number of infants and children, victims of the influenza epidemic that raged worldwide in the early 20th century, and veterans of the Civil War, World War I and World War II. A reflection of area history, the cemetery remained in use at the turn of the 21st century."
The church across the road from the cemetery is used as a community center now by the few remaining residents of the Democrat and the Rock Springs Communities. 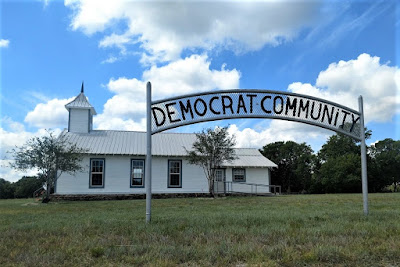 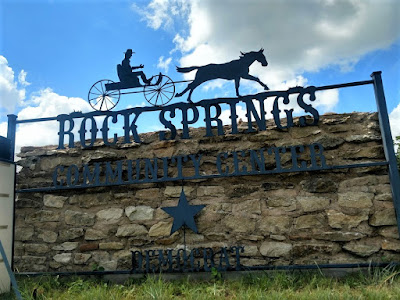 Driving further up into the town of Comanche, I arrived for my next geocache at the old train depot (GC6H0EC). Comanche was established in 1858, when Captain John Duncan offered the county 240 acres on Indian Creek as a site for a county seat. The commissioners' court accepted the donation, and Ransom Tuggle was authorized to lay out the townsite. T. J. Nabors built the first house. The new town replaced Cora as county seat in May 1859. The first courthouse was a "picket house"—a structure of logs cut and split on the ground, set vertically in a ditch, and covered with boards also made on the ground. The post office was established in 1860 and a newspaper, the Comanche Chief, began publication in 1873. The town, a supply base for Texas ranches during its early history, was incorporated in 1873. 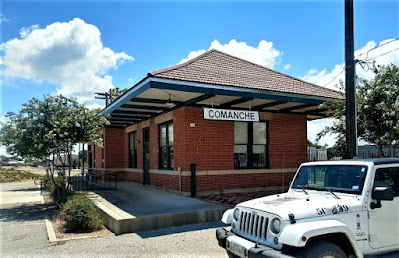 By 1892 Comanche had 2,500 residents, the Fort Worth and Rio Grande Railway, a daily stage, and numerous businesses. By 1915 the population was 4,500, and the town was a flourishing farm-market center and transportation center. Over the years the population would fluctuate down to as few as 3,415 and back up to nearly 4,500 again.
This geocache was a 2-stage multi-cache. I obtained clues at the train depot to figure out the final coordinates of the cache container which was located at the town's Oakwood Cemetery. When Captain John Duncan this land to establish the county seat, he specified sufficient portions be set aside for a graveyard, churches, and schools. A cemetery of about 6.5 acres was established and named Oakwood for the impressive oak trees growing on the site. The earliest marked grave is that of one-year-old John Neely, who died in January 1861.
The one grave that caught my eye was of M.R. (Boss) Greene (10-14-1843 to 5-12-1877). He was a Deputy U.S. Marshall who pursued  Dee and James Bailey for passing counterfeit quarters in Comanche. After a 10-mile chase, he captured and disarmed the brothers. Catching Greene off guard because of an unruly horse, one prisoner took Greene's rifle and shot him. He returned fire with his hand gun but was fatally wounded in the exchange. The prisoners escaped only to be recaptured and hanged on a live oak tree here in the cemetery where Greene is buried. 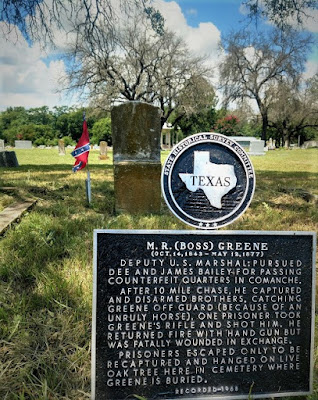 The next geocache was at the Amity Cemetery (GC2YQ7R). From the historical marker here: When 14-year-old Charles Farley died in Feb. 1878, his parents buried him near their farmhouse, as this frontier locality had no cemetery at the time. Three months later Fannie Nichols (1875-78) died and was buried nearby. The Farleys then donated an acre of land as a community graveyard. The neighbors built an adjacent brush arbor for funerals and general gatherings. In the summer of 1878, Baptists organized a church, naming it Amity (friendship). Before erecting their own buildings, Baptists and Methodists held services in the brush arbor or at Amity School (1 mi. NW).

William H. Lindley (1840-1913) bought land south of the Farley Farm in 1885. When new surveys placed the cemetery on his land, Lindley deeded the burial ground to the public. Later his son-in-law, George Brown, gave an additional acre to be used if needed. A large tabernacle with permanent fixtures replaced the brush arbor and was used for funerals until 1938 or 1939, when it was severely damaged by a storm. Free-will donations have maintained the cemetery since 1951. A "First Sunday in June Singing" which Amity Baptist Church originated in 1897 now serves as an annual memorial day and homecoming. By 1978 Amity Cemetery has nearly 400 graves.
On the way to my next stop, and one of the things I like about driving the backroads, was this unexpected picturesque scene of the giant hay wheels sitting on this green pasture. Contrast with the blue sky and white clouds I just had to stop and capture the photo. 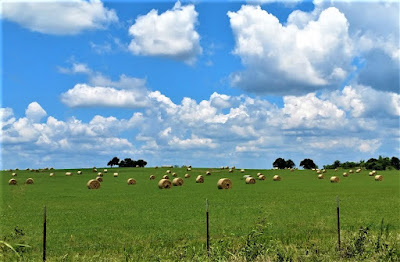 Up US-183 north of Rising Star, Texas was this abandoned building. I couldn't find out anything about it and couldn't decipher the name on the front. I also couldn't find the geocache on the side by the tree either (GC5M0MG). Looks like it may have been a store or gas station. Someone even suggested it looks like it could have been a post office. Got a lot of stuff stored inside now. 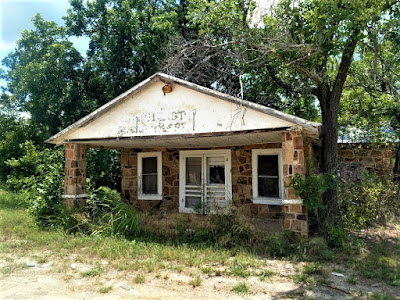 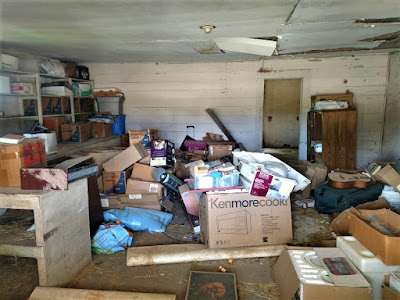 Also nearby is the Romney Lutheran Cemetery geocache (GC1HMM2). It's a small rural cemetery with less than 100 interments. The earliest known marker dates back to 1901. The town of Romney was established in 1880 when former West Virginian J.W. White arrived and named the community after his former hometown. The community was granted a post office in the early 1890s which remained open through 1931. Romney had always been an agricultural community, primarily cotton. At the turn of the 20th Century, it had most essential businesses as well as a school. A boll weevil infestation in 1914 curtailed growth although it limped along into the 1960s when it still had a gas station and two stores. The 1940 population was given as 40 residents. A slow decline drove this number down to a mere 12 by the 1980 census - where it has remained. 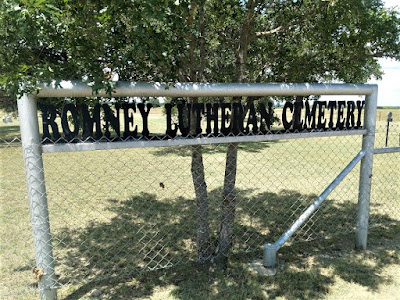 To the east of Romney was the Long Branch Church and Cemetery geocache (GC1KEEB). Formerly organized on July 16, 1885, the Long Branch Baptist Church held its first worship services in an old schoolhouse on land donated by R. B. Covington. The thirteen charter members were served by W. B. Cobb, the church's first minister, until August 1886. Missionary pastors continued to hold monthly services over the years. The congregation, which built its first sanctuary on this site in 1905-06, has provided significant service to the Long Branch Community and the surrounding area throughout its history. The cemetery has nearly 700 interments dating back to 1882. 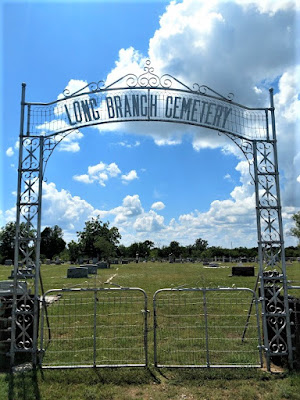 Then there was also the Pleasant Hill Baptist Church and Cemetery (GC7G2XZ) near the town of Carbon. The few original charter members met in the old Pleasant Hill Schoolhouse in 1892 and organized the Pleasant Hill Baptist Church. Although the first church structure, built in 1905, was destroyed by fire later that year, another was erected in 1906. A new structure was also built in 1945. Several pastors of this church have also held eminent positions at institutions of higher learning in the area. This congregation has remained active in community and mission programs. The cemetery has just over 300 interments and dates back to 1904. 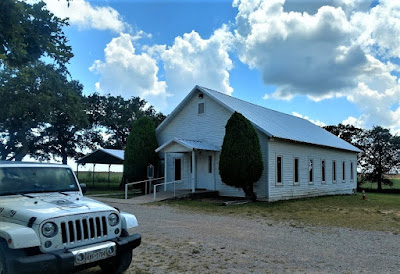 Heading back towards US-183, near the intersection is a TXDOT sign which displays the distance back to the town of Carbon. There's also a geocache near the sign (GC12CTF). I'm glad someone at TXDOT has a sense of humor for the properly distanced placement as well as the geocacher picking this spot to hide a cache. Now I'm thirsting for a carbonated beverage! 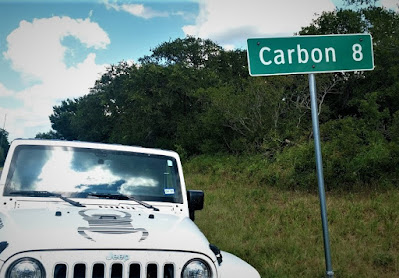 My second to last stop of the day was another cemetery geocache in Cisco at the Oakland Cemetery (GC3M5V5). With over 7500 interments located in this cemetery dating back to the 1870's. There are two that I want to bring to your attention: Sheriff George Emory "Bit" Bedford and Deputy George W. Carmichael. They were mortally wounded during what was called the "Santa Claus Bank Robbery" of 1927. Around noon on December 23, 1927, four men dressed up at Santa and attempted to rob the First National Bank of Cisco, Texas. At the time it was one of Texas' most infamous crimes and led to the largest manhunt in state history.
Because of the numerous bank robberies that took place in the recent months, the Texas Bankers Association announced a $5,000 reward for anyone shooting a bank robber during the crime. So when a bystander managed to escape early during the robbery and shouted out into the streets to get the attention of law enforcement, that also attracted anyone and everyone with a gun to assist in taking down one of the four Santa's. There is more to this story, though a quick read, and I encourage you to click the link in the previous paragraph and read the entire account at the Texas State Historical website. You'll be glad that you did! 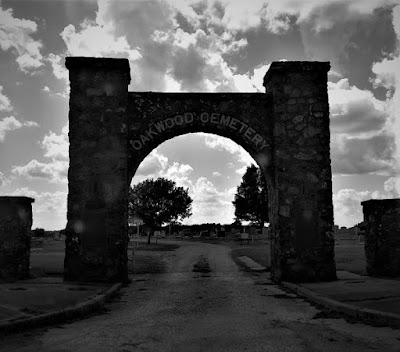 Continuing north a couple miles out of Cisco, I spotted a cemetery sign and had to investigate further. This small unkept cemetery was called Reagan Cemetery and according to the FindAGrave website contains 14 burials. Though I don't know why it called Reagan as there are no Reagans' buried here. Nor could I find any information about a town or community in the area called Reagan. The oldest is dated 1879. There wasn't a geocache here, so I hid one myself (GC8BNM4) to bring others to this forgotten cemetery. 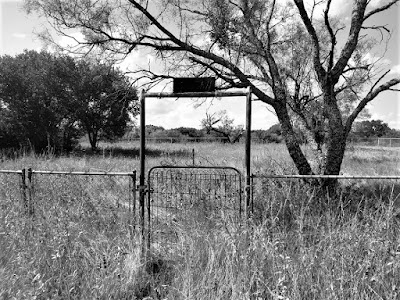 So that was it for stopping. It was already after 5PM and I still had 100 miles of driving to go. Along with getting a bite to eat, going to the grocery store so I have lunch for work tomorrow, etc etc. Thanks for riding along and I hope you come back again for another geocaching adventure.
Posted by Mark at 5:20 PM