Hello travelers, geocachers, and explorers. For today's edition of AwayWeGo's Geocaching Adventures, I got out of work early on this Saturday. That gave me some extra time to stop for a few geocaches on the way back to Killeen. Today we'll visit a couple of memorials, cemeteries, and some interesting sculptures. We have over 300 miles of driving and an open seat in the GeoJeep, so hop on in and let's go for a ride. 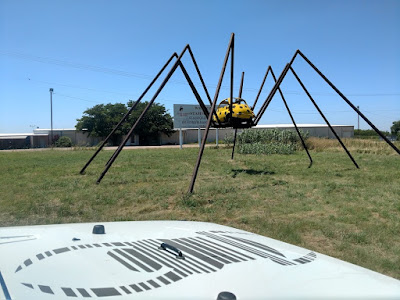 My first stop was a short drive down the road to the Knox County Veterans Memorial located in the town of Benjamin (GC19EFG). This impressive memorial is dedicated to all the citizens from Knox County who have made the ultimate sacrifice in service to this country throughout the various wars. 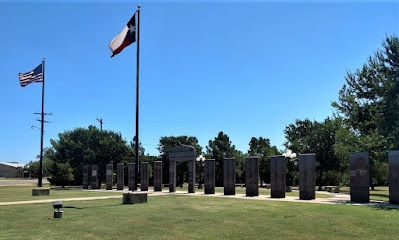 After the memorial, I drove over to the Benjamin Cemetery for another geocache (GC5N4H7). There are around 800 burials dating back to 1886. Benjamin is the county seat and first town organized in Knox County. Hilory H. Bedford, president and controlling stockholder in the Wichita and Brazos Stock Company, founded the town in 1885 and named it for his son Benjamin, who had been killed by lightning. The town received its first mail service in 1884; Bedford was postmaster. In 1886 the Benjamin school was organized with R. P. Dimmitt, Mrs. Oliver, and Mrs. M. S. Berry as first teachers. Other early residents included W. P. Lane, who opened a saddle shop in 1885, Tom Isbell, the first sheriff of Knox County, and Dr. G. H. Beavers. 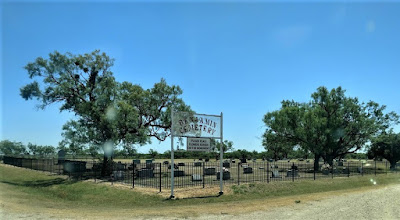 Driving south on Highway 6, passing through the town of Rule, Texas, I then stopped for two quick roadside geocaches (GC49G9G, GC4ZWD8).
Next up was the Capron Cemetery (GC5N3CT). It is a small rural backroads cemetery between Sagerton and Stamford in Haskell County. There are less than 100 interments here dating back to 1908. After a couple hours of research, I couldn't find much in the way of history for a town or community of Capron. Just a few obituaries for this cemetery. However... 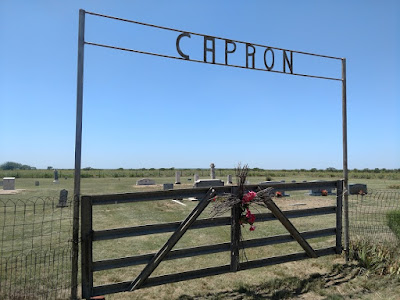 ...there was one story I found repeated in multiple newspapers across the country in February 1934, that mentioned the town.
HEADLINE: Stunt Flyer Killed When Plane Crashes
"Clarence 'Tailspin' Steffins, 28, Capron, Texas aviator, was killed here late today when the monoplane he was flying in an air circus fell in a spin. The crash was witnessed by his wife and a large crowd of spectators. A wing of the plane fell upon a motor car parked near the flying field, but occupants of the machine were not injured."
Continuing south, I arrive in the town of Stamford, Texas. Established by the railroad in the 1890's, Stamford was named by a railroad executive after his hometown in Connecticut. There was much history to see here, but I only stopped at one small corner to find a geocache (GC4ZWAZ) and see some interesting sculpture.
This first photo is often referred to "Bed Henge." Encircled like Stone Henge, the use of truck beds being inspired by the Cadillac Ranch around a cross made of wheels created by artist and Mayor Johnny Anders. 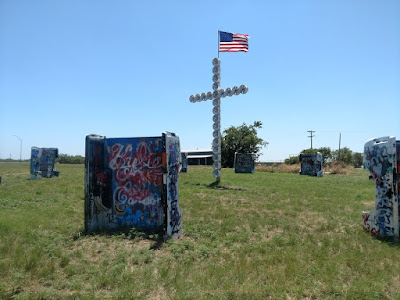 Mayor Anders also constructed his variation of the VW Bug / Spider sculpture. In this one though he used the Italian made Isetta microcar. 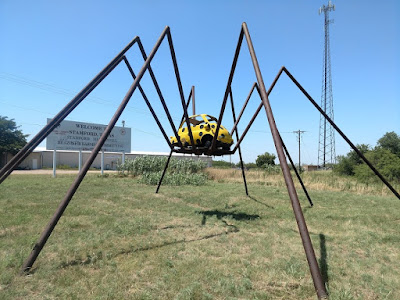 And finally, the Centennial Monument was dedicated June 30, 2000 to commemorate the 100 year anniversary of Stamford. A tribute to the area's railroad and ranching history. 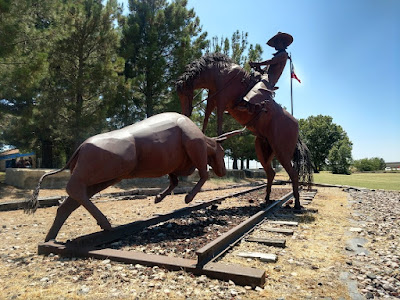 Moving along southbound, there were several quick roadside geocache stops before reaching my last geocache of the day at Burnt Branch Cemetery (GC1DY6N). Located several miles northwest of Cross Plains, it's another small rural backroads cemetery with less than 100 interments which dates back to 1893. I also couldn't find much history about the cemetery or the area. There was one headstone that caught my attention. Private Benjiman Clarence Barclay was just 22 years old when he died on November 1st, 1918, just 10 days before the end of World War I. Searching old newspapers though, I couldn't find any stories on Private Barclay. But I can only assume he died while in service. 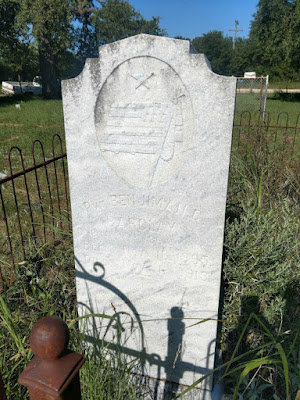 That's it for today. Come back again tomorrow for the return drive and see what else we can find...
Posted by Mark at 8:13 AM