Hey everybody! Well this is a short and sweet blog post. I had some personal business to take care of way down in South Texas in a town called Harlingen, not too far from the southern tip near Mexico. I did want to highlight a couple of places here though. I bet you're probably wondering about this first photo though. Why are you using the Iwo Jima statue pic in a blog about south Texas? Because the original... well I'll get to that in a minute. We haven't left the hotel yet this morning! 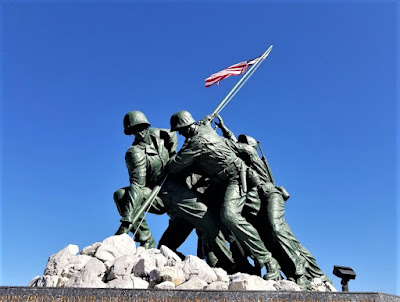 So when making reservations on South Padre Island, the "ocean front" rooms were all booked. OK, so second best thing is the "ocean view" rooms. When we arrived last night it was already dark and couldn't tell the difference. This morning I look out and really? Ummm really? Where's the water? Maybe if it rained hard and the parking lot next door flooded! Oh well, just stayed the night anyway. Gotta take care of business and hit the road. 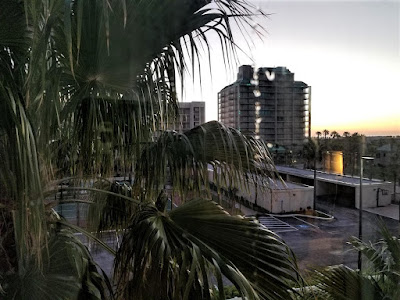 Down the block, I saw this gift shop and just had to pull in for a photo opp with the GeoJeep! Saw something similar in Myrtle Beach, SC and backed the Jeep up into the mouth. This place was open already so I decided not to. 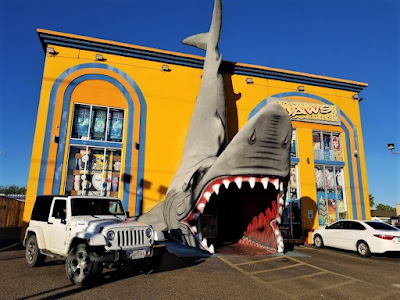 After the quick personal business stop in Harlingen and breakfast at IHOP, we drove over to the Marine Military Academy near the Valley International Airport for two great geocaches. The first was a traditional cache hidden under a tank-like "Expeditionary Fighting Vehicle" (GCMT90). I was so focused on the main attraction, that I forgot to get a pic of it!
The Iwo Jima Monument located in Washington D.C. wasn't the original monument. On Feb 19, 1945, Marines invaded the island of Iwo Jima, a Japanese stronghold in the Pacific. Two days later, Marines reached the top of Mount Suribachi and a small American flag was raised. Later, on the same day, a larger flag was raised by six Marines. Associated Press photographer Joe Rosenthal captured that flag raising on film. A few days later it was published in Sunday papers across America. Sculptor Dr. Felix W. de Weldon, then on duty with the U.S. Navy, saw the photo and constructed a small scale model within 48 hours. 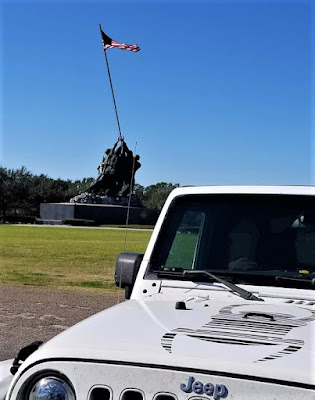 After the war, Dr. de Weldon worked for 9.5 years to create a full size model from molding plaster. The survivors of the flag raising posed for the artist to create their faces. Photos and physical descriptions of the three who gave their lives were used in modeling their faces.

Once completed in plaster, the statue was disassembled and shipped to Brooklyn, N.Y. to be cast in bronze. It took 3 years for the casting process. The bronze parts were then shipped to Washington D.C. for erection in Arlington National Cemetery. The plaster working model was shipped to Dr. de Weldon's studio in Newport, R.I. The U.S. Marine Corps War Memorial was dedicated on Nov. 10, 1954. 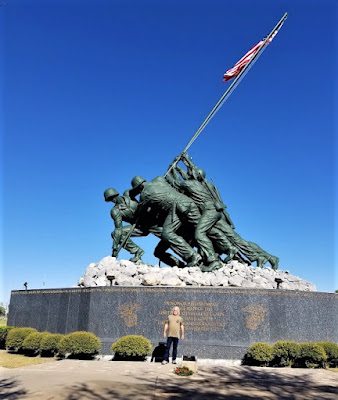 In October 1981, after much consideration, Dr. de Weldon gifted the original working plaster model to the Marine Military Academy in Harlingen, TX. This site selection included: 1. Fairly consistant temperature and humidity for preservation of the molding-plaster figures. 2. The street facing the memorial was named Iwo Jima Boulevard in 1965. 3. The MMA is the only place outside of Washington D.C., where proper honors are rendered with battalion-size dress blue parades. 4. The Marine placing the flagpole into the ground was a native of the area, Cpl Harlin H. Block. Block's gravesite resides directly behind the monument. Cpl Block was killed during continued fighting on Iwo Jima only a few days after the flag raising. .

The Iwo Jima Monument was dedicated April 16, 1982 on the MMA Parade Ground. It is coated with fiberglass for weather protection. And now it is also a virtual geocache  (GC7B6ED).
From there it was a long 6 hour drive back to Killeen, Texas so Candy can spend Christmas Eve and morning with her grandkids. Then later Christmas Day driving to McCamey in West Texas for work on Thursday. I'm exhausted! I need to go back to work to get some rest! See ya next time...
To follow along on our travels and keep up with my latest blogs, you may do so here of course. But also by using you favorite of these social media platforms: Facebook, MeWe, Gab, Reddit, Parlor, Twitter, and Instagram. These all link directly to my profile. Again, please feel free to comment and / or share.
Posted by Mark at 6:42 AM