2019-11-25: Our Return to Hiking the Lighthouse Trail in Palo Duro Canyon Texas

Welcome back friends, family, geocachers, RV'ers, Jeepers, and everyone else who just happened to drop by my AwayWeGo's Geocaching Adventures blog. This is more about just geocaching though. I'm here to share my travels around this great country. The geocaching just helps me find some of those out-of-the-way very rural backroads "not-on-your-tourist-map" great sightseeing treasures.
If you'd like to follow along via many of the social media sites. I'll provide links at the end of this blog. I'd also love to hear from you, so please feel free to comment here or on the social sites. And please by all means share my stories with your friends too. I hope my stories inspire you to get out and explore. 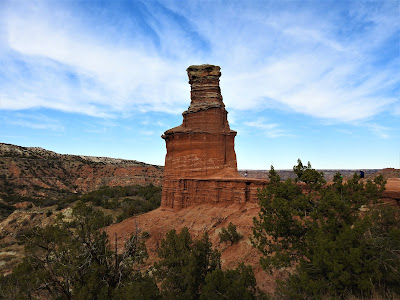 Well after my opening paragraph, today we DID do the touristy thing and return to the Palo Duro Canyon. We both had this Thanksgiving week off so we decided to take a drive up to Amarillo, Texas and do some hiking in the Canyon. We were here a few years earlier to make this hike and that's where I proposed to her. (see "She Said Yes!") We've been married now for just over three years.
Plus along the hiking trail up to the famous rock formation called The Lighthouse, there was a trail of geocaches hidden. Many of those caches had been missing and we had to DNF them. They've since been replaced and now we can redeem those DNF's. 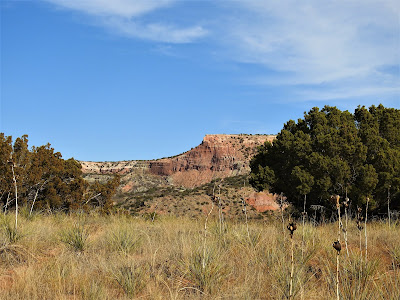 The weather couldn't have been better! It was cool out and with sunny skies, it made for perfect hiking. It also made for some pretty good photos I think. This next photo I call Sitting Chief. I don't know if it has an official name, but that's what I think of every time I see it. 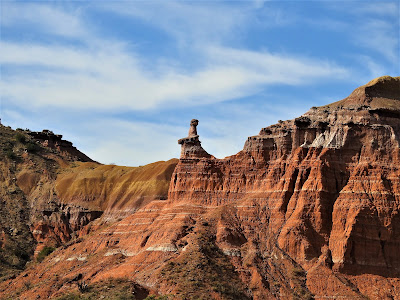 Some background info from the Palo Duro website: The history of the canyon goes back a long ways. The Clovis and Folsom peoples first lived in the canyon and hunted large herds of mammoths and giant bison. More recently, the Apache, Comanche, and Kiowa took advantage of the canyon's plentiful resources. These early cultures left behind rock art and bedrock mortars where they ground mesquite beans and roots for food. The early Spanish explorers probably discovered the canyon and called it Palo Duro, Spanish for Hard Wood.
The Red River War between the U.S. Army and southern Plains Indians lasted from June 1874 to the spring of 1875. A decisive battle occurred in the canyon on Sept. 28, 1874. Colonel Ranald S. Mackenzie led the 4th U.S. Cavalry in a surprise attack at dawn on a camp of Comanches, Kiowas and Cheyennes. The families fled up the canyon, leaving everything behind. MacKenzie’s troops captured 1,400 ponies and shot most of them. Soldiers also burned all the teepees and winter stores. With no horses or supplies, the families had no choice but to return to the reservation. The reign of Native Americans over the Panhandle plains ended soon after. 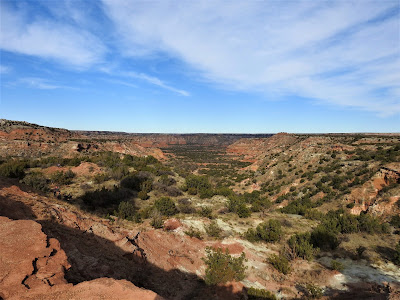 Charles Goodnight, a former Texas Ranger, drove 1,600 Longhorn cattle to Palo Duro Canyon in 1876. He and his partner John Adair, an English aristocrat, founded the JA Ranch in 1877. At its peak in 1885, the ranch grazed 100,000 head of cattle on 1,325,000 acres spread across the Panhandle. After Adair died, his widow, Cornelia, took over as Goodnight’s partner. In 1887, Goodnight decided to scale back his ranching activities. The partnership ended that year, and the partners divided the land. Most of the canyon belonged to the JA Ranch up until 1890. Adair descendants continue to run the JA Ranch today.

The state bought the land for the park from Fred S. Emory in 1933. Soon after, Civilian Conservation Corps workers arrived, and spent the next five years creating a park. First, they built a camp for their home base, and then they set to work in the immense canyon. The men built the winding road to the canyon floor. Until it was finished, they hiked in and out of the canyon on what is now the CCC Trail. CCC workers made all of the park’s original improvements, including El Coronado Lodge (now the Visitor Center), the cabins on the rim and canyon floor, and trails. Designers planned the park to maximize views and complement the surroundings. The CCC used local stone and wood for building materials. In addition, workers forged decorative metal and crafted furniture. The park opened in 1934 before it was complete. It is the second largest park in the state parks system today, with about 28,000 acres 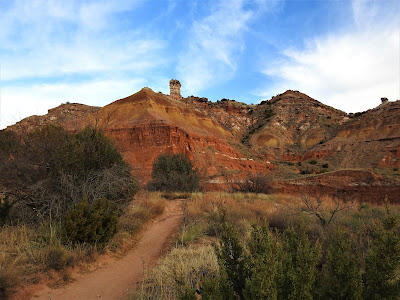 So of the 6 or 8 remaining caches along the trail that we needed to find, we only DNF'd just one... again. Since our last visit there was added a virtual geocache (GC7B6H7) and an earthcache (GC81YE8) up at Lighthouse Point. Upon arriving, we did the obligatory oohs and aahs, took in the views and captured some photos. Then after a short time we hunted for the answers for the caches before descending down into the canyon for our hike back to the parking lot. It is a beautiful Texas State Park and one of my favorite places in the country. I'm sure we will be returning again often. 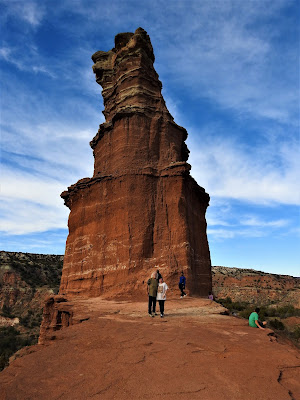 I hope you have enjoyed our visit today to Palo Duro Canyon up in the panhandle of Texas. To follow along on our travels and keep up with my latest blogs, you may do so here of course. But also by using you favorite of these social media platforms: Facebook, MeWe, Gab, Reddit, Parlor, Twitter, and Instagram. These all link directly to my profile. Again, please feel free to comment and / or share. Until next time... see you out on the road!
Posted by Mark at 7:48 AM