2020-03-29: Roadtrip Day 3: Driving Through Mississippi and Alabama on the way to Georgia

Welcome back to day #3 of our east coast roadtrip from Texas to Georgia. For today we travelled through Mississippi and Alabama. We gotta long day ahead with a lot of stops, history, cemeteries, counties, and geocaches. So let's get rolling... 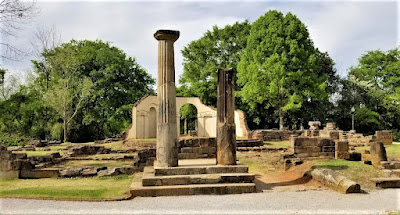 After checking out of the hotel and grabbing breakfast, we found a quick geocache (GC30XDE) right next door to start the day with a Leflore County find. The next three geocaches were quick roadside caches for Carroll County (GC4GX44, GCQ0DW). The last one (GC11P5Y) was down by this creek where supposedly a family of bobcats were living. I even brought my good camera with the zoom lens just in case, but didn't see anything. 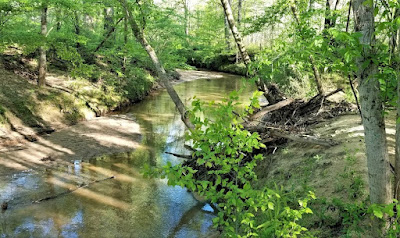 Still traveling eastbound on US-82, we stopped at the Old Middleton Cemetery (GC5J1PN) for a Montgomery County geocache find. The Middleton Cemetery was established in 1833 and has 126 interments with the last being in 1910. Then the cemetery was abandoned and went unmaintained for nearly a century. Finally there was an interest in the cemetery once again and most of the headstones were found broken and scattered. In 1992, the Winona Lion's Club cleaned up the 2 1/2 acres, reassembled the broken pieces, and arranged them together as a memorial.

More quick roadside geocaches to pick up some new counties in Mississippi: Webster County (GC7BW83), Choctaw County (GC7BW7J, GC7BW7B), Oktibbeha County (GC3WMG1), Clay County (GC48PN6, GC2DQQ2, GC3D99T), and Lowndes County (GC3CG7V, GC7ER16).
Continuing east on US-82 and crossing over into Alabama, our next stop was the Funderburk Family Cemetery (GC1X277). Located along US-82 on the west side of a tiny community of Coal Fire in Pickens County. Originally called Fundee, it was the combination of two settling families; the Funderburks and the DeLoaches. The name was eventually changed to Coal Fire or sometimes called Cold Fire after a local creek. A post office was established in 1871 but closed in 1927. This small family cemetery was downhill closer to where US-82 is today. When the widening of the highway to 4-lanes began, the state moved the thirteen graves further up the hill into the woods as you can see from the photo below. The graves date from 1850 to 1898. 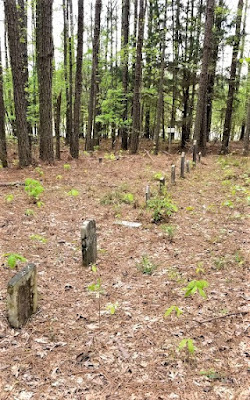 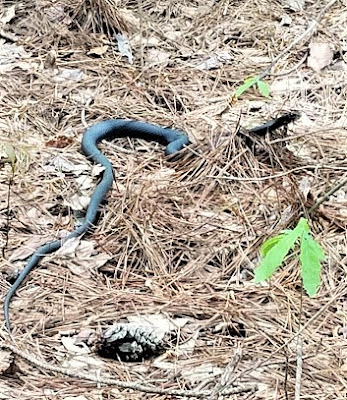 Guardian of the Cache

One more quick geocache on the other side of the Coal Fire Community (GCVMR1) and we continued down the road.
The next three geocaches were in the Corinth Church Cemetery in Tuscaloosa County (GC333MN, GC4AR5A, GC4AR4T). I found two of them but had to DNF on one. This cemetery has over 600 interments dating back to 1860. The one that caught my eye though was this more recent black headstone with the mural on it. 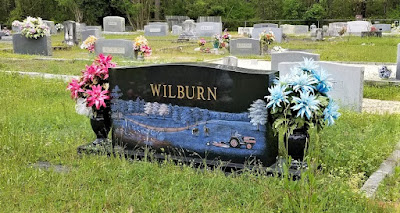 Our next stop was near downtown Tuscaloosa, Alabama at the site of the State Capital Ruins for a virtual cache (GC7B7T6). In 1825, the Alabama State Senate agreed to move the capitol from Cahaba to the thriving town of Tuscaloosa. The building was completed in 1829 and had this beautiful copper dome that could be seen by all the passing vessels down the Warrior River below. The building was fashioned in the Greek Revival, and the Federal styles of Washington D.C. and Thomas Jefferson. The building was used as the capitol until 1846.
It was at this time that the state capitol was moved to Montgomery, down where more commerce was being conducted along the Alabama River with the majority of the states population. Tuscaloosa lost over half its population after the capitol was moved. The building was then given to The University of Alabama who seldom used it so they leased it to the Baptist Convention who established the Alabama Central Female College. In 1923 it burned down and was suspect to faulty wiring as the cause. 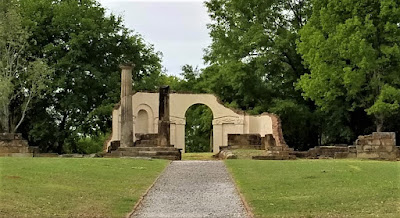 On the parameter of the square now known as Capital Park, sites a few historical buildings. This first one is the Old Tavern. Built in 1827 three blocks east on Broad Street, it was also a stage stop and inn frequently used by political leaders while Tuscaloosa was still the state capital. It was moved here to Capital Park in 1966. 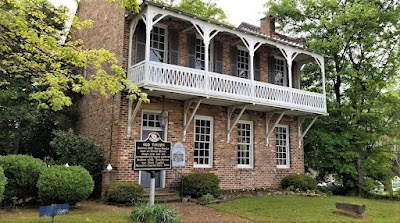 When Alabama became a state in 1819, Tuscaloosa also was incorporated as a town. The following year in 1820, the McGuire-Strickland House was built. The house stands to this day as the oldest wooden framed home in Tuscaloosa. Originally located at the corner of Greensboro Avenue and 15th Street, this home was built for the county’s first probate judge, Moses McGuire. The home later served as the manse or preacher’s home for the First Presbyterian Church from 1844 to 1866. The house was bought by the Strickland family in 1866 and remained in the family for over a century until 1969 when it was given to the newly formed Tuscaloosa County Preservation Society. Around 1970 the home was moved from its original location to Capitol Park where it is currently used as part of the Capitol School. 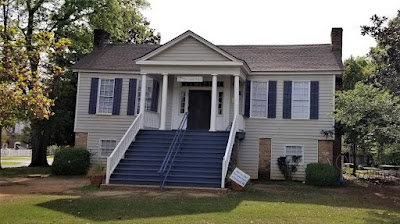 On the southeast side of Tuscaloosa is the Veterans Memorial Park and our next geocache (GC8BFBG). Some of the displays here include the Vought A-7E Corsair II, a 5 inch / 25 caliber "Dual Purpose" secondary artillery gun from the U.S.S. Tuscaloosa, a M60A3 TTS Medium Tank, and a Bell UH-1 Iroquis (Huey) Helicopter. This memorial was built on the site of the Northington General Hospital, a U.S. Army hospital operating here during World War II. 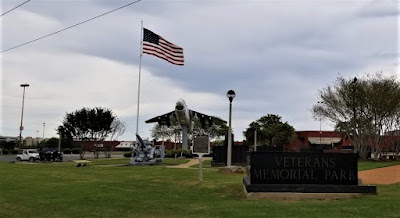 But of course my favorite was the Willys Jeep decked out in Air Force colors. Here's my GeoJeep TB with Uncle Willy. 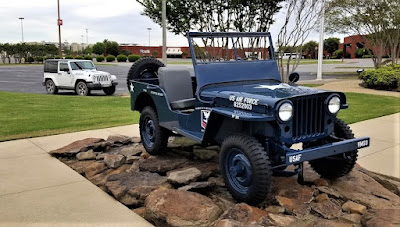 Leaving Tuscaloosa and getting back down US-82, our next stop was a quick parking lot find at a Walmart in Bibb County (GC1K0NY).
And finally, our last geocache of the day was an old virtual cache called Just Plain Spooky (GCB13A) located in Autauga County. All the locals who live in Prattville are aware of this display, but visitors do not know about. Mr. Rice started this display in 1987 and added more to his collection year round, until he passed away in 2003. He wanted to 'spread the word'. His collection has been documented in a book that they have at local bookstores around Prattville and Montgomery. The photo I took is just a small section of what is probably four times the length of the display.

Well that's another 300 miles behind us, another 23 caches and almost 12 hours later. Time to stretch out and relax a bit. And tomorrow we'll start all over again! See ya back here real soon...
To follow along on our travels and keep up with my latest blogs, you may do so here of course. But also by using you favorite of these social media platforms: Facebook, MeWe, Gab, Reddit, Parlor, Twitter, and Instagram. These all link directly to my profile. Again, please feel free to comment and / or share.
Posted by Mark at 3:37 AM