2020-06-20: Taking a Trip Back to Mayberry and Andy Griffith's Hometown of Mount Airy, North Carolina

Welcome back friends, family, fellow traveler's, Geocachers, Jeepers, RV'ers, and ALL of you who've stopped by our AwayWeGo's Geocaching Adventures Blog. We're a couple of work travelers in construction and our job takes us all over the country. Currently, we're on a project in Central North Carolina near the town of Maiden.
Today was a great day to take a roadtrip back to Mayberry (GCJF95). Many say that "The Andy Griffith Show" was based on Mount Airy, NC, Andy's birthplace. So let's go for a drive and see what they've done to the town.
Mount Airy was settled in the 1750s as a stagecoach stop on the road between Winston-Salem, North Carolina and Galax, Virginia. It was named for a nearby plantation. Mount Airy was incorporated in 1885. The City's official seal was established in 1977, which depicts major industries that are home to Mount Airy including: furniture, textiles, and the granite quarry. In 1994, Mount Airy was named an All American City.

The Andy Griffith Show aired eight seasons on CBS from October 3, 1960, to April 1, 1968. The series originated partly from a prior episode of The Danny Thomas Show. The show stars Andy Griffith as Andy Taylor, the widowed sheriff of Mayberry, North Carolina, a fictional community loosely based on Mount Airy. Other major characters include Andy's cousin, the well-meaning and enthusiastic deputy, Barney Fife; Andy's aunt and housekeeper, Bee Taylor; and Andy's young son, Opie. Griffith said that the show evoked nostalgia, saying though it was shot in the '60s, it had a feeling of the '30s. It was, when we were doing it, of a time gone by." 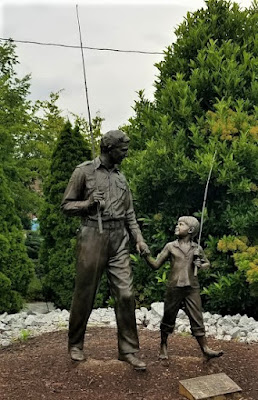 Griffith was born on June 1, 1926, in Mount Airy, North Carolina, the only child of Carl Lee Griffith and his wife, Geneva. As a baby, Griffith lived with relatives until his parents could afford to buy a home. With neither a crib nor a bed, he slept in dresser drawers for several months. In 1929, when Griffith was three, his father began working as a helper or carpenter and purchased the home pictured below in Mount Airy's "blue-collar" south side. Griffith grew up listening to music. By the time he entered school, he was well aware that he was from what many considered the "wrong side of the tracks". He was a shy student, but once he found a way to make his peers laugh, he began to come out of his shell and come into his own. 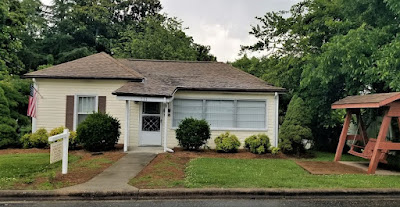 The Mayberry Courthouse is a replica of the courthouse that appeared in “The Andy Griffith Show” during the 1960s. Situated adjacent to Wally’s Service Station, visitors can sit behind Andy’s desk, type on the vintage typewriter, and even sit in the recreated jail cells that appeared in the show. 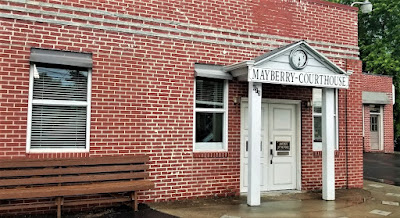 Remember Sheriff Taylor’s police car? The one you saw in every episode? In Mount Airy, you can tour all of the sites in a Mayberry squad car. Each tour starts at Wally’s Service Station, then it will travel up and down the streets of Mount Airy. Wally’s Service Station is an original service station built in 1937 and operated as a Gulf Station and then later operated as a Standard Oil Station or Esso. 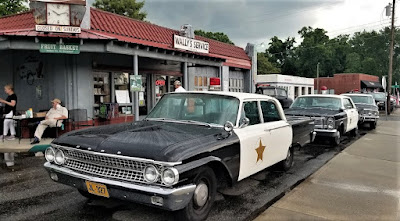 As a student at Mayberry Union High (Mount Airy High School), Griffith cultivated an interest in the arts, and he participated in the school's drama program. A growing love of music, particularly swing, would change his life. Griffith was raised Baptist and looked up to Ed Mickey, a minister at Grace Moravian Church, who led the brass band and taught him to sing and play the trombone. Mickey nurtured Griffith's talent throughout high school until graduation in 1944. 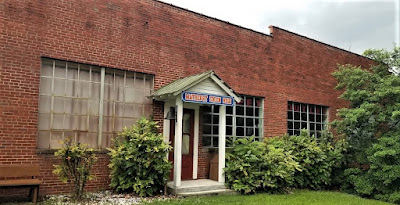 The Darlings (usually pronounced "Darlin's") lived in a mountain shack, like the one below behind Wally's Garage, somewhere in the mountains neighboring Mayberry. The good-natured, but trouble-making Appalachian clan, led by patriarch Briscoe Darling (played by Denver Pyle) usually came into town piled into the back of their old truck. 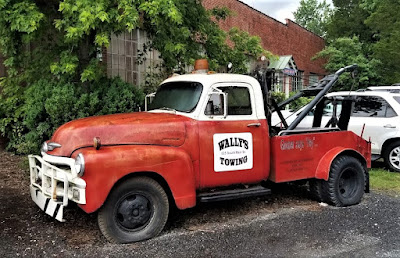 Though Methodists had been present in Surry County since the 18th century along with Baptists, Moravians, Quakers, and other religious groups, the original Methodist church in town was established only in 1831. The “Old Methodist” cemetery belonged to Mount Airy’s Methodist Episcopal Church, South, after part of the 1831 Lebanon congregation moved to a new location on South Main Street in 1858. The cemetery and church were built on land donated from Elisha Banner’s plantation, and the earliest burial dates back to 1857. 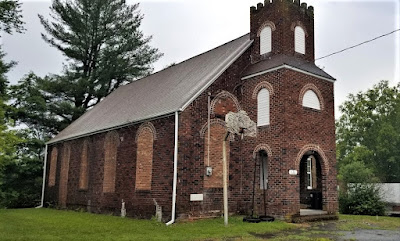 Local tradition says that the church’s bell, now housed in Trinity Episcopal’s belfry, tolled during funerals for every year of the deceased’s life. The cemetery acted as a town cemetery, not just for one for Methodists, and it was replaced by Oakdale Cemetery in 1892 when space began to run out. The church changed its name to Central United Methodist Church when it moved closer to the center of town in the 1890s, and the last burials at the Old Methodist Cemetery (GC4NZNT) were made around the turn of the century. 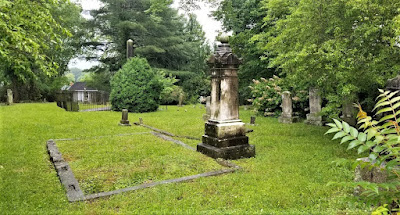 Leaving Mayberry, we drove down the highway on the way back but not before hiking Mount Pilot. Pilot Mountain was the inspiration for the fictional town of Mount Pilot in “The Andy Griffith Show.” Nearby the actual town is Pilot Mount State Park (GC88Z1Y) which is known for its Big Pinnacle peak seen for several miles. It was a nice short hike over to the observation deck where I got this great wide angle photo.

That was our return to Mayberry. It's one of those must visit towns if you're a fan of the of the TV show.

To follow along on our travels and keep up with my latest blogs, you may do so here of course. But also by using you favorite of these social media platforms: Facebook, MeWe, Gab, Reddit, Parlor, Twitter, RVillage, GETTR and Instagram. These all link directly to my profile. Again, please feel free to comment and / or share.
Posted by Mark at 7:02 AM