Welcome back to our Geocaching Adventures blog. Sorry for the delay in this post. Hopefully I'll be getting caught up with my writing soon.

On this weekend back in August, we had first made a stop in Lubbock, Texas for a visit to a cardiologist there. Afterwards we made our way up to Amarillo where we would stay for two nights while we Geocached and explored the Texas Panhandle. The goal was to go Geocaching in the ten remaining counties to finish the area. 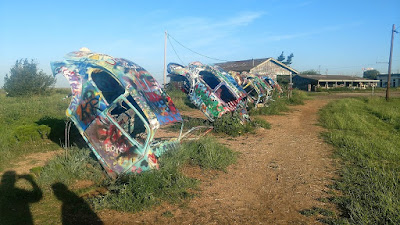 County #1 Carson: While in Amarillo last year we had visited the famous Cadillac Ranch. This time  around we made a stop at our first cache and the lessor known Bug Ranch (GCDB98) on the east side of town. The Bug Ranch is the unsuccessful 2002 marketing idea of the Crutchfield Family for their Trading Post and Ranch. The five VW Beetles, closed trading post and motel are now just a place for tourists to get a photo opp and leave their spray painted signature behind. So I've seen the Cadillac Ranch, the Airstream Ranch down in Florida, and now the Bug Ranch. Are there any more? 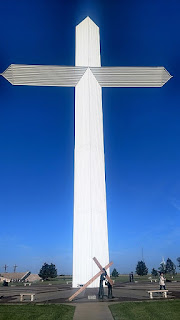 Continuing eastbound on I-40/US-66, our next stop was a two-fer virtual (GC8B0E) and a traditional (GC68M62) cache in Groom, TX. As a former trucker, I had passed by this 190 foot tall cross and a couple of others like it throughout the country.
If the huge cross wasn't enough, there are 12 prayer stations with 12 life-sized statues depicting various stages of Jesus' life. And further off to one side are more life-sized statues of the Lord's supper, Golgotha and the three crosses, and a cave representing the empty tomb. And finally a visitors center and gift shop.

What was supposed to be a quick stop, a few photos and go, turned into over an hour of looking, reflecting, and browsing the store. If you're ever driving down the highway and come upon one of the amazing crosses around the country, be sure to take the time and stop. 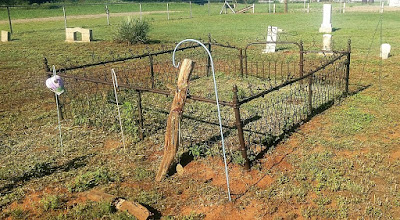 County #2 Wheeler: Getting back on track and two counties over, we stopped in Lela, TX to travel back in time a little. Originally called Story when it was established in 1902, a postmaster changed it the following year to Lela in honor of his wife's sister. By 1906 a nearby town became the center of trade and attention drawing residents and businesses away from Lela. The post office closed in 1976 and the school in 1992. The town's population has only grown from 50 in the 1940's to just over a hundred today. But it does contain two Geocaches: at the Old Lela Cemetery (GC61X3E) and the old red brick schoolhouse (GC2XZ1P). 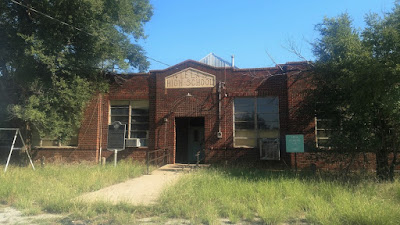 County #3 Collingsworth: We then headed south on FM 1547 into a new county and another ghost town. Near the Salt Fork of the Red River in northwestern Collingsworth County. The town of Dozier was on the Rocking Chair Ranch until the ranch ceased to exist. Post office was granted in 1904 with the Dozier school district being organized five years later when a schoolhouse was built. The school's location changed several times until a larger building was constructed in 1913. This school lasted until 1929, when a brick school was built. By 1930 the population of Dozier was 60 and it somehow increased during the Great Depression to 100 by 1940. There's a historical marker there (GC245QN) but the school building itself has recently collapsed. As for the cemetery, it is still in use to this day and has over 400 permanent residents. 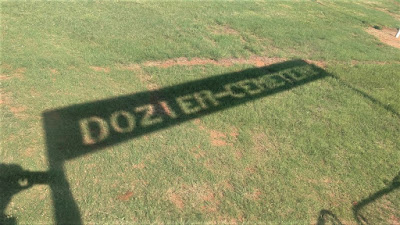 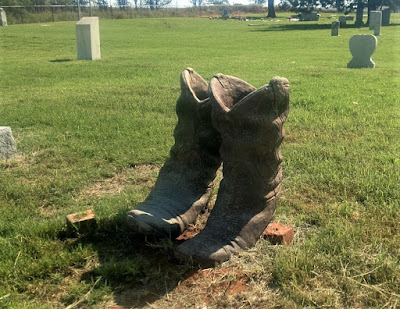 Over to US-83 and turning back to the north, I make a quick stop for an easy guard rail cache (GC21677). Back into Wheeler County and the town of Shamrock at the intersections of US-83, US-66, and I-40. Shamrock is the nearby town that boomed taking away from Lela that I mentioned earlier. The first cache I stopped for there brought us to a huge mural on the side of a building. Crossroads of Highways (GC2167E) highlights the towns history. 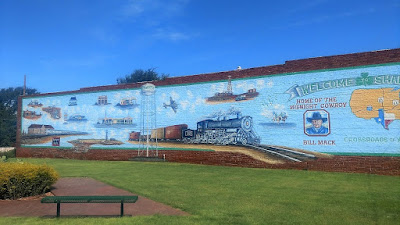 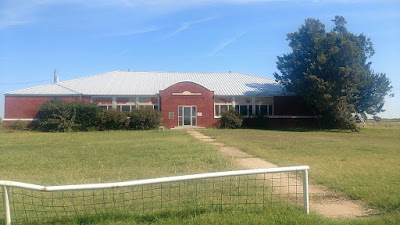 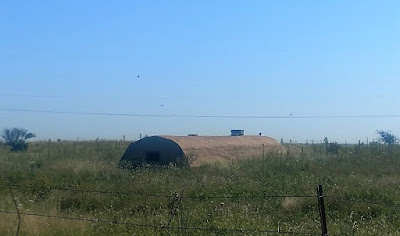 Another in the town of Shamrock is the Get Your Kicks! cache (GC1Q175). Going back to the famous Route 66 days, the Tower Station and U-Drop Inn's unique design and architecture were the inspiration for the body shop owned by the character Ramone in the animated movie "Cars." 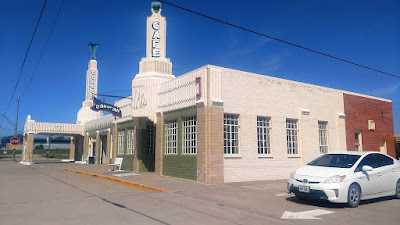 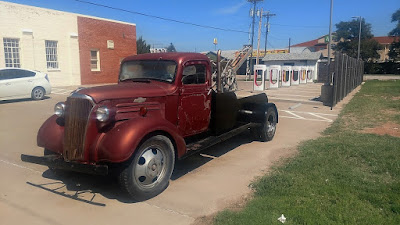 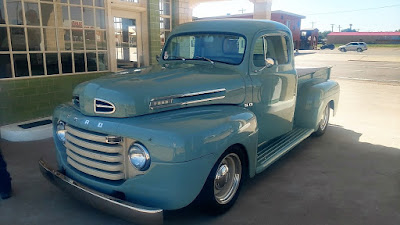 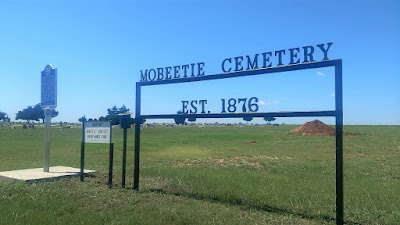 There were two more caches in the NW corner of Wheeler County that I couldn't pass up. The first was at the Mobeetie Cemetery and called Wild West: Miss Mollie's Love (GC5EPXK). Mobeetie Cemetery is the first known established cemetery in the Texas Panhandle. It was born of necessity, established as a final resting place for those whose journey ended in Mobeetie, which evolved from an 1875 hunters camp and nearby army post. Over the course of time, some of the grave markers have been destroyed by both tornadoes and natural decay. The oldest gravestone is dated May 2, 1882. Other burials include outlaws, accused horse thieves, those killed by a 1898 tornado, ladies of the evening and the infant daughter of Temple Lea Houston. In addition it is the final resting place for the famed Texas Ranger Captain G.W. Arrington.

The cache is named for Miss Mollie Brennan. Her original marker has since long been destroyed or decayed, a memorial headstone is placed in the vicinity. It reads: Killed January 24, 1876, in a gunfight in Mobeetie, she was a young blue eyed, black haired beauty Lady Gay Saloon girl. She jumped in front of Bat Masterson and saved his life in the fight between Bat and Corporal Melvin A. King of Fort Elliot. This fight is where Bat received his leg wound and started using his famous cane. (Mobeetie was then Sweetwater City.) She was about the first one buried in this cemetery somewhere near this marker. 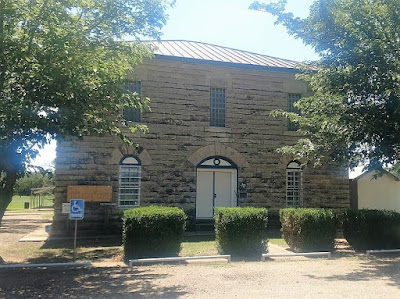 The other cache is at the Mobeetie Jail Museum (GC2GYFX). Mobeetie was as rank a place as any fancier of rankness could ever want. Gamblers, prostitutes and gunfighters turned Mobeetie from Hidetown into a frontier Sodom and Gomorra. Pioneer Panhandle cattleman Charles Goodnight described the town as "patronized by outlaws, thieves, cut-throats and buffalo hunters, with a large percentage of prostitutes."Temple Lea Houston, Sam Houston's youngest son, wrote his wife that Mobeetie was "a baldheaded whiskey town with few virtuous women."


If you enjoy history as much as I and are intrigued by the previous paragraph, I encourage you to read more about Mobeetie's history following these links: Texas Escapes, a Bald-Headed Whisky Town, and Judge vs Marshal. 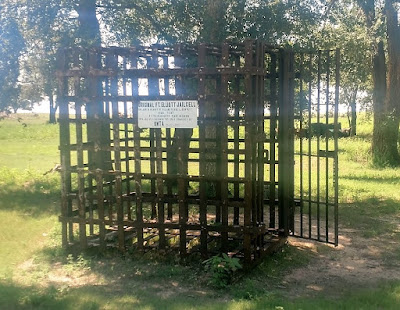 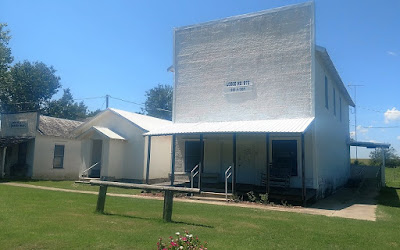 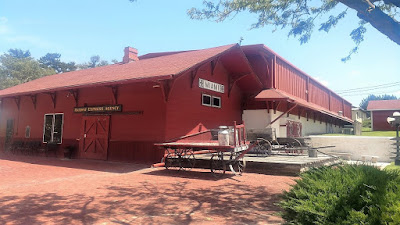 County #4 Roberts: Gotta keep moving along and up to Miami, TX in Roberts County for our next trio of geocaches. First was the Emerson No. 1 cache (GC3GQ1H) at the Miami Railroad Depot and Roberts County Museum. Miami supposedly derives its name from an Indian word meaning "sweetheart." The first settler on this site was Marion Armstrong, who in 1879 erected a half-dugout stagecoach stand near Red Deer Creek on the mail route from Mobeetie and Fort Elliott to Las Vegas, New Mexico. The town was platted in 1887 by B. H. Eldridge on the proposed route of the Southern Kansas (later Panhandle and Santa Fe) Railway. Samuel Edge and Mark Huselby purchased several lots and formed the Miami Townsite Company. Supplies for the railroad-construction crews were furnished by daily stages from Mobeetie. By 1888 Miami had 250 inhabitants and three hotels, three grocery stores, two saloons and a cafe, two livery stables, a post office, a mercantile store, a drugstore, and a tin shop. When Roberts County was organized in January 1889, Miami was chosen as county seat. The election, however, was declared fraudulent in December, and Parnell, twenty-five miles northwest, was the legal seat of county government until Miami won another election in November 1898. The present courthouse was built in 1913 to replace an earlier wooden structure.

The next two caches in Miami are located at the cemetery (GC5R93X, GC5R93C). The earliest cemetery in the town of Miami was established shortly after 1887 when the Southern Kansas Branch of the Atchison, Topeka and Santa Fe Railroad was extended through Miami. The earliest known burial is that of early pioneer William T. Lard who died on December 6, 1888 and was reinterred here prior to 1900. 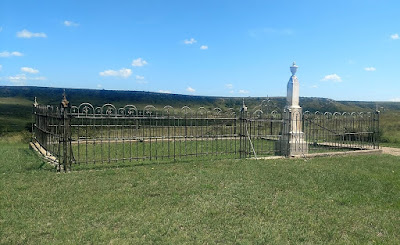 County #5 Hemphill: Continuing up US-60 across the line into Hemphill County for a quick roadside cache. In the Shadow of the Giants (GCJZ0E) takes you to an area surrounded by oil wells with a huge dinosaur looking over them from the top of the hill. Because dinosaurs make the oil deep down in their underground factory right? 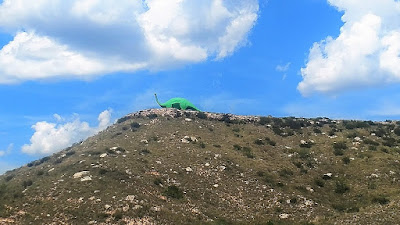 A few miles up the road stopping at the cemetery in Canadian, TX for the Hammer & Anvil cache (GC69PMF). After a bit of searching, we came up empty handed and had to log a DNF.

County #6 Lipscomb: Ugh, too much sightseeing and gotta make up time. Fortunately the next cache (GC117XQ) is a quick roadside stop cutting across the SW corner of Lipscomb County.

County #7 Ochiltree: Yay! Next over into Ochiltree County and another quick Cache and Dash (GC500DK) geocache at a picnic area.

County #8 Hansford: Now heading westbound on TX-15, we arrived at the Hansford County Cemetery (GC6BJJW) for our next geocache. It's the first burial ground set aside in this county. The earliest grave was that of Mrs Alfie P. McGee who died in 1890. Also buried here are the Cator Brothers, founders of Zulu Stockade, and the Wright Brothers, not the flyers but early ranchers. It was the only official cemetery in the county until 1928 and is still in use today. We didn't take time to look around though. Just grabbed the cache and drove on.

Getting late and running out of time, we turn south on TX-136 heading back to the hotel in Amarillo. The final two of the ten counties I needed will have to wait another day.

On the way back I still stopped for two more cemetery caches. I already had those counties so they won't count. Land for the establishment of Lieb Cemetery (GC5P1RG) was donated by Will Blakey and W.O. Jarvis in the spring of 1902. A meeting was held for the purpose of building a schoolhouse. Plans were made and lumber was hauled by wagon from Channing. Completion of the school was in April 1903. A two month school term was held that spring. Classes were held at Lieb until 1929, when the district was consolidated with two new districts, Pringle and Morse. The school building mentioned on the marker is now a community building for meetings of farmers in the area and sets adjacent to the cemetery.

That last one for the day was the Unknown Cemetery (GC5EPY6) located out in the farm land. There were just a few headstones of which only one could be barely legible. The headstone reads: N W Reeder 1827 1896. Neither the previous cache owner nor the current cache owner could find any information on the pioneer cemetery. And I checked the Findagrave website with the name listed above and came up empty as well. You can see from the photo below that if you didn't already know there was a cemetery there you wouldn't realize it. 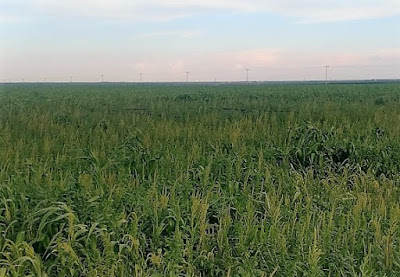 So after a long day of caching and driving over 400 miles around the Texas panhandle, we made it back to the hotel in Amarillo with 20 caches and 8 new counties. Tomorrow we head back home down to West Texas.
Posted by Mark at 8:28 PM