In this addition of my AwayWeGo's Geocaching Adventures blog, once again I'm on my regular Sunday drive from Killeen in Central Texas to Fort Stockton in West Texas.

For my new readers who may not know, I live in Killeen but work in West Texas. So at the end of my work week, either on a Friday or Saturday night, I'm driving home 360 miles eastbound to see my wife. Then on Sunday's I have to drive the 360 miles back. So it's the Sunday's when I do my geocaching and exploring to break up the long drive.

And between the daily commute to work and going home on the weekends, my new GeoJeep is racking up 1200 miles a week!

About an hour into driving, I arrived at Buchanan Lake and Dam along Hwy 29 in Llano County. There I found the first geocache and historical marker. C.S.A Salt Works (GC15HQA) was located between Tow Valley and Old Bluffton, 15 miles N.E. and since 1937 under Lake Buchanan. During the Civil War they made salt for the table, curing meat and hides, and feeding cavalry horses.

I wish I was here back in 2007-2009 when there was a drought taking place. Buchanan Lake was down 50% and the ghost town of Old Bluffton, which normally sets at the bottom of the lake, was now exposed. I found a great story at the Texas Observer website if you want to look into that.

On the way to the Llano Cemetery, I stopped at a roadside picnic area for a quick park and grab geocache (GC1Y0AK).

Arriving at the Llano Cemetery, there are actually three geocaches here for me to find (GC6H514, GC7AG8C, GC4R6A4). Area residents founded the city of Llano as the county seat for the newly formed Llano County in 1856. By August 1862, with the interment of one-year-old Tina Miller, this site served as a burial ground. Seventeen year old Emily Young Wright was interred here a few weeks later. Their two gravestones are the earliest marked burials.

One of the geocaches highlights South Carolina native Dillard Cooper. He came to Texas in January 1836 with Captain John Shackelford's Red Rovers, landing at Copano Bay and joining Col. James Fannin's command. Following the Texians' defeat at the battle of Coleto Creek on March 20, the wounded Cooper was among many soldiers taken prisoner at Goliad. One week later, Mexican troops shot and killed more than 300 prisoners; Cooper was among a handful who escaped. He and companions spent two weeks traveling at night through enemy lines and abandoned settlements to reach Texian forces at the Brazos River. Cooper lived in Hays and Colorado counties before moving to farm with his stepson in Llano and San Saba counties in 1878. Dillard Cooper died in 1896. 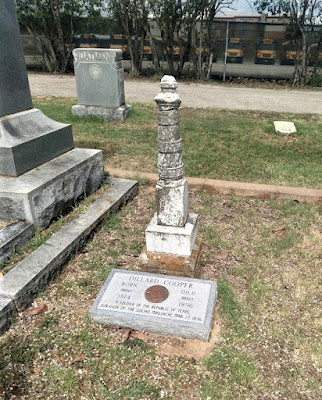 Another monument that caught my eye was this one for Elmer Lee Crockett. Born in 1896, many years after the Alamo, but died in 1919 at age 22 in France. Hmm... there was a war going on over there. After a little research, I found out that Crockett left Llano to enter the service in September 1917. He arrived in France in February 1918 and was a part of the machine detachment of the air service division. Even though the Armistice was signed in November 1918, Crockett remained in France for active duty. However in January of 1919, Elmer Lee Crockett died from acute appendicitis. It wasn't until August 1921 before his body finally returned to Llano where it was laid here in his hometown. 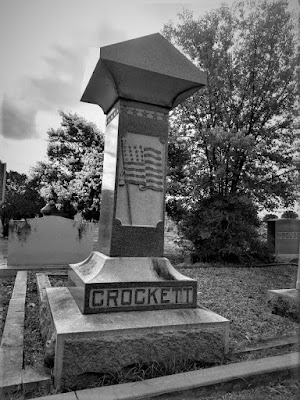 Continuing westbound on Hwy 29, when I arrived in Grit, Texas, I took a short detour south on US-377 down to the Cavness Cemetery (GC7RCBR). Located in the Streeter Community, around 1855 Irish settlers, including William S. "Uncle Billy" Gamel and the Caveness brothers, began moving to the area. Shortly thereafter, Germans also began to settle in the community. While there are many unknown and undated markers here, two of the oldest are both from 1880. Four year old Steaven Cavness and 86 year old Elias Hiram Hays. I can only assume that one of the Cavness brothers mentioned above was a Robert "Bob" Cavness (1822 - 1902), who is buried here along with his wife Mary (1822 - 1892). There wasn't a geocache here, so I hid one myself. 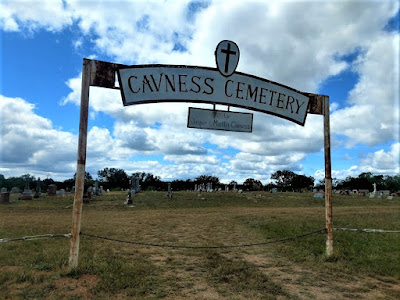 Sometimes while driving along the backroads of America, you see areas that you just have to pull over and take a photo and that's what I did here while on my way to the next cemetery. 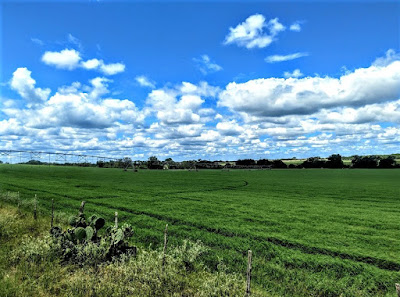 Just north of Streeter was the Coffee Cemetery. As the community of Streeter was growing, Tom Brite opened a store, and Charles Brite once operated a gin and flour mill. A well kept cemetery going back to the 1870's and still being used today. Another cemetery which didn't have a geocache, so I hid one there also (GC7RD83). Near the cache you'll find the headstones of Charles Brite (d.1926) and Tom Brite (d.1927) which are mentioned above. You'll have to find the headstone of W. A. Brite who I can only presume to be their father who died in 1891. 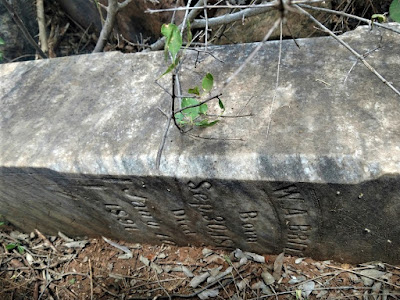 Continuing through very rural dirt backroads, working my way back up to Hwy 29 and arriving at Jacoby Cemetery (GC7RDA1) to hide another geocache. A small family cemetery dating back to 1915 for the not named infant Son of Max and May Jacoby. Still maintained and used, currently only about 30 interments here from the families of Eckert, Hahn, Jacoby, Kuhlman, and a Rolston. While I placed the cache over by the corner post, be sure to pay a visit to Sgt Melvin C Eckert born September 26, 1921 and was killed in action during WWII on June 25, 1943. Here in the Jacoby Cemetery is a memorial headstone with his family. His body is interned at the Ardennes American Military Cemetery Neuville-en-Condroz, Arrondissement de Liège, Liège, B-4121 Belgium. 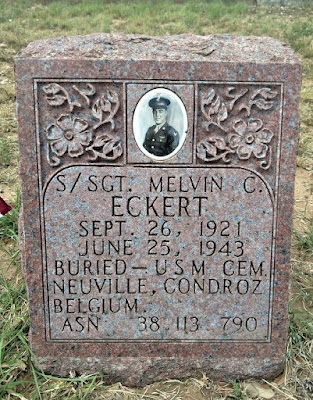 Then I encountered another one of those "just gotta pull over and take a photo" spots. 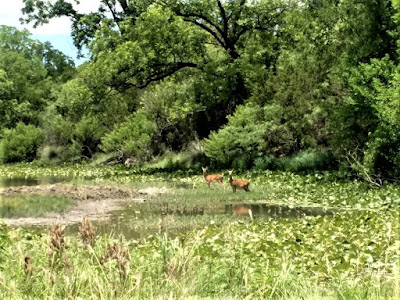 Next stop was a quick roadside geocache at a historical marker (GC5ADDH). The Pegleg Crossing on the San Saba River, at the mouth of MacDougal Creek twelve miles east of Menard in Menard Count. For years a favored Indian campground, it entered written history, 1732, as site of Spanish-Apache battle. It was used almost continuously by the Spaniards from the time of the establishment of Santa Cruz de San Sabá Mission in 1757 until the end of the colonial period. In 1849 William Henry Chase Whiting surveyed the ford as a part of a migration road to California. It served the army as a crossing, linking Fort McKavett with San Antonio both before and after the Civil War.

From 1867 until 1888 the San Antonio-San Diego (Southern) Stage Line used the military road; the stage line had a relay station, called Pegleg Station, constructed on a hill overlooking the ford. The Western Trail likewise used the ford for cattle drives from south central Texas to northern ranges and railheads. When State Highway 29 from Mason to Menard was built, Pegleg Crossing was abandoned. Probably named by landowner Wilhelm Harlen for one-legged land commissioner T.W. Ward. Gained notoriety for many hold-ups that occurred at "Robbers' Roost" (1 mile west).

Just two more geocaches before getting back to Fort Stockton. A quick roadside park and grab (GC43AHP) and another historical marker (GC3TXRG). The marker is for the Giddings' Pecos Station.

In the mid-19th century, stagecoach lines were a primary means of moving people, mail and supplies through the region. The U.S. government contracted with Henry Skillman for the San Antonio-El Paso Stage line in 1851. In this area, the route ran along the historic Chihuahua Trail, also know as the Lower Road, which was designed to carry U.S. mail. The service soon added passenger and freight delivery. Skillman and William “Bigfoot” Wallace were two of the better known drivers.

In 1854, George H. Giddings took over the San Antonio to El Paso line and created a series of stage stations in the area. In 1858, he established one near the “S” crossing of the Pecos River. It had two structures built of adobe, limestone and wood. Teamsters used the larger building as a kitchen and dining room and the smaller structure as sleeping quarters. An adobe or high pole corral with a wide gate stood behind the buildings, housing dozens of horses and mules. Water came from a nearby hand-dug well, formerly an existing spring.

In early 1862, a driver of the stage to Fort Lancaster reported Indians had destroyed Pecos Station, and the site was abandoned. Lt. Col. Thomas B. Hunt led a detachment past the ruins in 1869, giving the position as the west bank of the Pecos, 2.5 miles from Camp Melbourne. The exact location of the remote post, however, remained in doubt over the years until archaeological investigations in the early 21st century. Stone foundations and cultural artifacts from the 1850's, along with evidence of earlier Native American occupation, helped identify this isolated scene of frontier life.

That's it for another Sunday drive. There's a lot of history and interesting stories along the backroads of this great country. You just gotta be willing to look for it. And thanks to geocaching it's a little easier to find!
Posted by Mark at 7:00 AM