For Day #2, I hit another power run just south of Killeen and picked up another 22 geocaches bringing my total up to 9992 finds. Most were quick park and grabs along the roadside so I don't have any photos to show you. But two caches did get favorite points from me for their creativity. Those were "Jennings Branch" (GC4VHNF) and "Pineworker's Revenge" (GC6PVWG). Only 8 more caches to go!

So that's it for Day #2 and as you can see it would have made for a very short blog post for the day. Therefore, I decided to include the first stop of my Day #3.

I began Day #3 at the Oakwood Cemetery in Austin, Texas. From the historical marker: "In 1839, when Austin was being opened as a site favored for the Capital of the Republic of Texas, a regular burial place was established in what is now the southwest part of Oakwood Cemetery. A decedent was buried on this hill at a spot to the right of Oakwood's present main entrance and northwest of the Hebrew ground within the enclosure. It was not until September 1, 1856, however, that the land legally became city property. On that day the Legislature of Texas transferred the burial tract from the public lands to the corporate city of Austin. Across the decades, the name has changed: in 1886 it was the "City Cemetery"; 1903 "Austin City Cemetery"; and in 1912 "Oakwood". 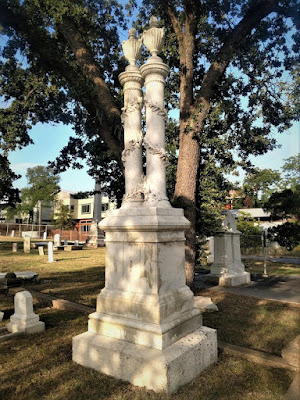 "Here lies the mortal remains of many pioneers and builders of Austin, and their successors. Among the national and state personalities, cabinet members, governors and other high state officials, mayors, business and professional leaders, and solid citizens from all walks of life.

"The two Jewish sections of Oakwood have been given perpetual care by Temple Beth Israel since 1876. The Austin city government accepted responsibility for permanent care of Oakwood Cemetery in 1970."

Below I'm gonna highlight just some of the much rich history to be found in this historic cemetery. There is more to be found here I'm sure. But due to time constraints, I just looked for the historical markers or headstones that caught my eye.

George Washington Glasscock was born in Kentucky in 1810. He served in the Illinois Militia in the Black Hawk War of 1832 as 1st Lieutenant and commander over Abraham Lincoln. Later, he was Lincoln's business partner in flat-boating on the Sangamon River.

In 1834, George came to Texas and settled in Zavala. As events unfolded in 1835, he quickly became involved in the Texas Revolution, fighting along side Jim Bowie and Ben Milam in the siege of Bexar. After independence, George was a surveyor and moved to the Williamson County area in 1846, where he opened the area's first grist mill and donated land for the county seat. He settled in Austin and became a state legislator and a prominent citizen. Georgetown and Glasscock County are named in his honor. This is the headstone of George and his wife Cynthia. 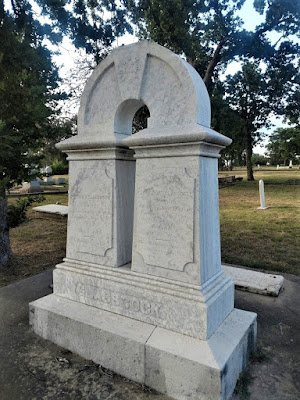 Thomas "Tom" Green was a Civil War Confederate Brigadier General. Prior to the Civil War, he served as an Army officer in the Mexican-American War and as clerk of the Supreme Court of Texas. He entered the Civil War as a Colonel in the brigade of General H. H. Sibley and saw service in New Mexico. In 1863, he was promoted Brigadier General in command of the Texas Confederate forces, participated in Battle of Galveston and at Mansfield and Pleasant Hill, Louisiana. At the Battle of Blair's Landing, April 12, 1864, he was killed at short range by the cannon of a Federal gunboat on the Red River. A Texas county was named in his honor. 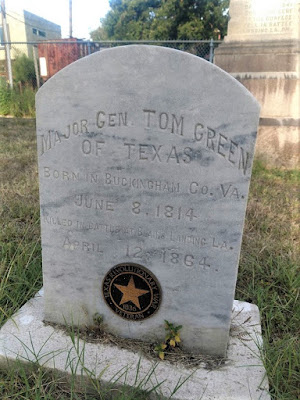 Georgia native Lewis Miles Hobbs Washington came to Texas about 1835 and joined the Revolutionary forces at San Antonio. A member of Col Fannin's staff, he served with the Georgia Battalion at Refugio and Goliad. He was appointed to an office in Sam Houston's Presidential Administration during the days of the Republic. Washington was killed in Nicaragua while in Central America as a news reporter. His body was not recovered but his wife, Rebecca, is buried here. 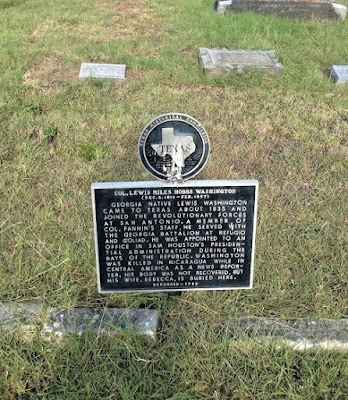 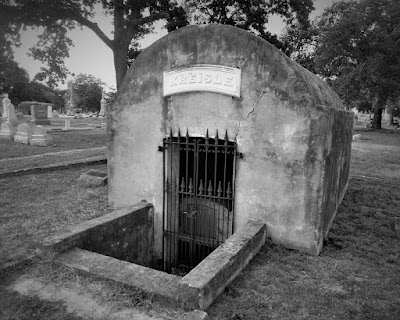 A native of North Carolina, Abner Hugh Cook came to the newly created capital city of Austin in 1839 with a skill in design and construction that soon earned him the title of master builder. Working as architect, engineer, and contractor, Cook produced some of the finest public buildings and Greek revival homes in Texas, including the governor's mansion and the Neill-Cochran House. A charter member of Austin's First Presbyterian Church, Abner Cook died soon after completing work on the old main building (now razed) on the University of Texas campus. 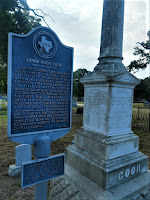 A native Sweden, Swante Palm was was a leader of early Swedish immigration to Texas. Influenced by his nephew, Swen Magnus, Palm came to Texas in 1844. He settled first in La Grange, where he served as postmaster and worked in Swenson's general store. Both men moved to Austin in 1850 and continued their business relationship. In 1854 Palm married Agnes Christine Alm. Their son, Swante Sture, was born in 1855, but died in infancy.

Politically active, Palm held a number of public offices, including Travis County justice of the peace, alderman, and postmaster. As vice consul to Texas for Sweden and Norway, he was instrumental in bringing thousands of Swedish immigrants to the Swedish Evangelical Lutheran Church (now Gethsemane Lutheran Church) in Austin. Swedish King Oscar II knighted Palm in 1884 for his service to Sweden and Texas' Swedish immigrants. A devoted book collector, Palm amassed a large library which he donated to The University of Texas in 1899, increasing its holdings by over sixty percent. An Austin school was later named in his honor. 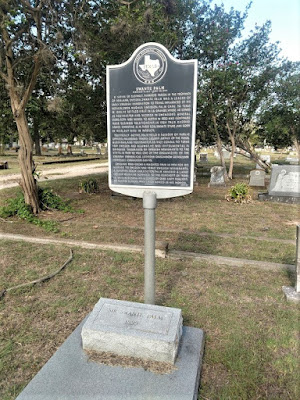 Mississippi native William M. "Buck" Walton attended the University of Virginia and studied law in Carrollton, MS. In 1853, he moved to Austin, where his first law partner was A. J. Hamilton, the later Governor of Texas. In 1862, he enlisted in the Confederate Army, serving in Co. B, 21st Texas Calvary. He was elected Texas Attorney General in 1866. In the practice of law he had few peers in land litigation, and was considered one of the best criminal defense attorneys in Texas. Esteemed for his generosity, Major Walton was a well known public speaker, author and civic leader. He retired in 1907, but remained active until his death at age 83. He is buried here with his wife of 60 years, Lettie Watkins Walton, their four children and other family members. 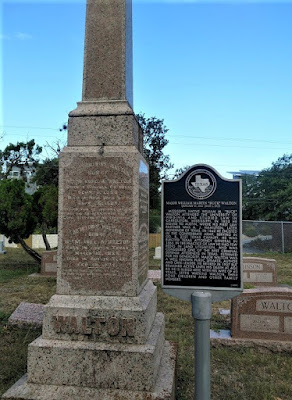 Born in Huntsville, Madison County, Alabama in 1815, Andrew Jackson Hamilton studied law and was admitted to the bar in Talladega in 1841. Moving to Texas in 1846, he began practicing law in LaGrange, Fayette County. He was appointed acting state Attorney General in 1849, and in 1850 was elected to a term in the State House of Representatives. Hamilton was elected to the United States House of Representative as an Independent Democrat in 1858, representing the Western District of Texas. He did not seek re-election in 1860 and later moved to New Orleans, Louisiana.

During the Civil War, he was commissioned a Brigadier General of Volunteers and in 1862 was appointed Military Governor of Texas, with headquarters at federally-occupied New Orleans and Brownsville. In June 1865 Hamilton was appointed by President Andrew Johnson as the 11th Governor of Texas, a provisional post in the early Reconstruction period; he served for 14 months. He was a Texas Supreme Court justice in 1866, a delegate to the Loyalist Convention in Philadelphia in 1866, and an unsuccessful candidate for Governor of Texas in 1869. He died of tuberculosis in Austin. 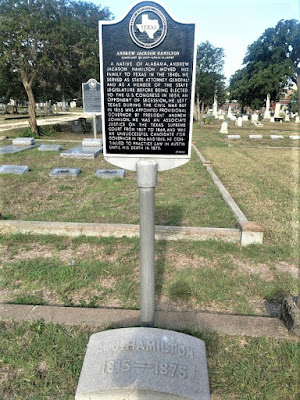 Born Susanna Wilkerson in Tennessee, she was the wife of Captain Almaron Dickinson and was the sole adult Anglo survivor that witnessed the massacre at the Battle of the Alamo. On the morning of March 6, 1836, as the troops of General Antonio López de Santa Anna stormed the mission, Captain Dickinson ran to his wife, reported that all was lost, and expressed hope that she could save herself and their child. Although he died at the Alamo, his wife and child Angelina survived. Following the fall of the Alamo, Susanna was escorted from the Alamo mission, interviewed by Santa Anna himself and sent by him with a message to Sam Houston. She was a strong woman survivor and remained a patriot of Texas, but the memory of those days would haunt her the rest of her life. 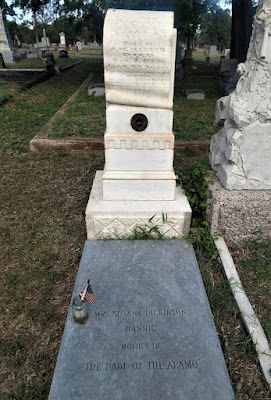 One more burial to note that doesn't have a headstone or marker, but did receive a historical marker. Jacob Fontaine was born in Arkansas and came to Austin about 1850 as a slave of Episcopal Minister Edward Fontaine. In 1864, Jacob began preaching separate services for fellow slaves attending the First Baptist Church, then founded the First Baptist Church Colored, about 1867. Jacob also established five other churches in this area and a county association of black baptists. He was politically active; published the "Gold Dollar," an early black newspaper; and urged black voters to support Austin's bid for the University of Texas in 1881. He is buried here in an unmarked grave.

So that is how Day #3 started out and what turns out to be THE DAY of achievement reaching my goal of 10,000 geocaching finds! Come back again for the conclusion and see what incredible Geocaching Adventure I selected for this huge milestone.
Posted by Mark at 7:55 PM