Hey Everybody! Welcome back to another of my adventures. This road trip adventure is brought to you by the company I work for. You ever have to take a business trip to corporate headquarters for a training meeting or something. The company wants to fly you in, pays for the hotel, and fly you back home. A long way to go, but you don't get to see anything.
Since I was between projects and had the free time, I asked if I could drive up and get reimbursed for the gas and hotels instead of them paying for airfare. And the answer was YES! Sounds like a road trip to me! So I start planning a route and looking up geocaches from Killeen, Texas to Minneapolis, Minnesota.
I also thought it would be fun to go along with another geocacher. So I inquired of another former Floridian cacher who's now living in Austin called "CuteLittleFuzzyMonkey", or CLFM for short. We've tried caching together before but just could never get our schedules to line up. He got back to me in a couple of days and said the timing works out perfect so it was a go!
Today was the day to hit the road and CLFM drove up to Killeen from Austin to meet me at my house. We both have GeoJeeps, but I prefer to drive so we took mine. Since he's got all the caches picked out and navigating, it only makes since for him to be in the passenger seat anyway right! Plus he's officially still on the clock and has to answer work related texts and emails too. So... AwayWeGo...
Our first stop was a puzzle cache up in Dallas. Puzzle geocaches are usually not at the posted coordinates. I hate puzzles because I'm not good at solving them. Fortunately CLFM is a puzzle master and has hidden many of them himself. Plus this one was called "Infinite Monkey Theorem" (GC3BT76) so we just had to find this one! I took one look at the puzzle and had no clue. But he solved it and we found the cache.
Next up was a virtual cache. A virtual geocache has no physical container. There are requirements like answering questions or taking a selfie at the given location. This is the original Pegasus (GC7B9NE) that once rotated 450 feet high above Dallas atop the Renaissance Revival Magnolia Building. The 40' tall flying red horse rotated on the 50' tall oil derrick above the 29 story building for the offices of the Magnolia Oil Company, which later was acquired by the Mobil Oil Company, from 1934 through 1999. This original sign was packed away in storage and replaced with a new sign. Found in 2012 and restored, it was moved to it's new location and lit up once again in 2015 at this Omni Dallas Hotel location. 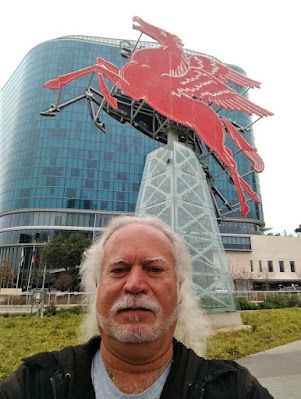 Our last stop in downtown Dallas was another virtual geocache at this 30' eyeball (GC7B77Z). Created by artist Tony Tasset in 2007 for a temporary display in Chicago. After time in storage and a stop in St Louis, the Joule Hotel in Dallas purchased it in 2013 to anchor its sculpture garden. It certainly is an eye catcher! (Sorry, I couldn't resist.) 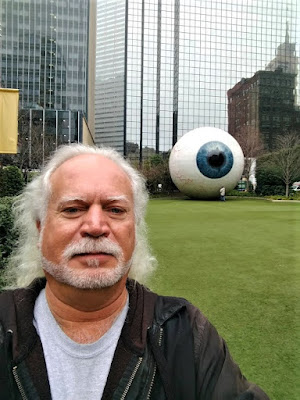 Continuing on our way north, our next stop was at the Oakland Cemetery for two geocaches in Marshall County, Oklahoma (GC57HYM, GC5NHBK).
Then over to Johnston County for another virtual geocache at a veterans memorial park (GCGDCQ). The park is dedicated to the residents of Tishomingo who gave their lives in the various wars. One of the displays included this Blue Angels fighter jet. 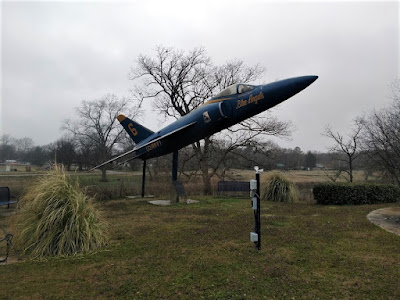 A quick stop at the McAlister Cemetery gave us a cache in Carter County (GC2B84E). Sadly though, it also gave me a pain in my back! OUCH!! I've picked up heavy objects, bend the knees, don't bend the knees, no problem. This is the second time I've reached for a micro cache and just send a huge pain shooting through my lower back. The first one was leaning over a guard rail and reaching in for the cache. This time I see the cache, just reach into the bush, and almost drop to my knees in pain. Not the way I want to start this road trip.
Continuing north on I-35, we stop at a rest area to use the facilities and grab a cache for Murray County, Oklahoma (GC6TRPJ). Ugh... getting in and out of the Jeep is painful. It's not bad while I'm sitting. The heated seats help.
Now it's time for another virtual geocache. You know the best thing about geocaching is that you find some of the strangest things. In Cleveland County, we found some Bug Art (GCF12E). Someone actually took this full sized VW Beetle and added some legs to make it look like a bug for a great roadside attraction. 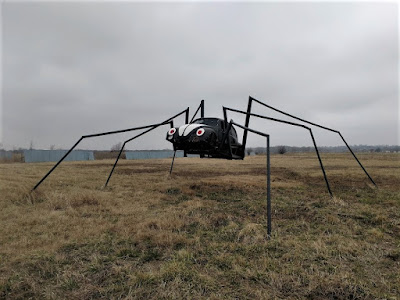 Some quick roadside caches (GC7ZGMJ, GC1VN87) and another puzzle cache (GC5EX03). And then there's this virtual cache for the Oklahoma City Air Force Memorial (GCF69C). 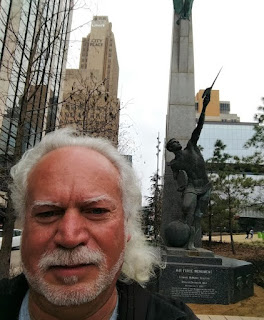 And this virtual cache at the Oklahoma City Memorial (GC4772). I wish we had time to look around further but we have a long road ahead and a lot of geocaches to find. Plus my back was killing me still. 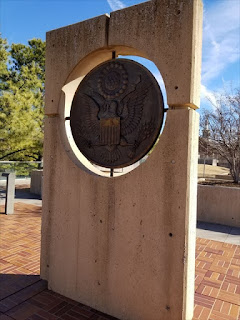 After seven more geocaches, we ended the night in Perry, Oklahoma. I thought it would finally be good to lay down and stretch my back out. Wishful thinking. My back was so  tight I could barely move. I crawled into bed but I couldn't even take my shoes off. I couldn't take my jacket off. I couldn't move at all. Eventually I did manage to get some sleep but not much. Maybe an hour or so. Hopefully tomorrow will be better.
Posted by Mark at 6:34 PM