Welcome back friends, geocachers, road trippers, and fellow backroad explorers. If you remember back from last weeks blog post, I had arrived in North Carolina to start building a new solar farm here in Beaufort County near the town of Wilkinson. After working all week, now it's the weekend and time to go geocaching and exploring! And time to fill in some of those empty spaces on my North Carolina County map! 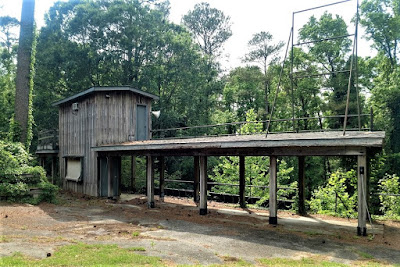 My first stop was at a Bojangles for breakfast and also a quick geocache (GC381EA) in the parking lot to claim Pamlico County. Further down the road another quick parking lot geocache (GC7BY75) in Craven County. Then down in the town of Maysville in Jones County, there was small library with my next geocache (GC6WW4B). My next geocache was in Carteret County at the Hadnot Creek (GC1NEZK). Over in Onslow County by the White Oak River was the Bridge to Stella geocache (GC7R2VB).
Still in Onslow just a few miles away are my next three geocaches. Placed on Riggs Road, by a cacher named RiggsNC, the first was at the Riggs Family Cemetery" (GC6CFJP). And this really cool "Riggs Farm - TB Bed and Breakfast" cache (GC6JB0Z). 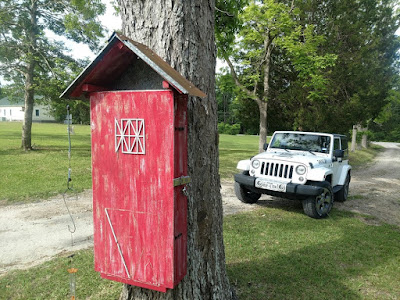 A travel bug hotel cache is large enough to hold lots of swag and and trackables. This one is themed like a farm. It very creative and well done. It had a lot of favorite points. (Unfortunately this cache has been archived since I had found it. The Riggs have moved away and since this was on their property, it went with them to be relocated as well.) 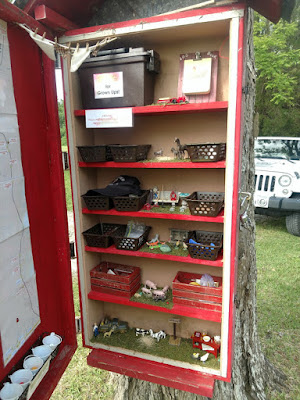 Then there was the "Meet Me at the Corner" cache (GC6F5BJ). Another creative cache by RiggsNC. Now if a photo is worth a thousand words, then I guess it's best if I describe this cache with a short video clip:
Driving south on US-17 on the way to the next county, I stopped in Holly Ridge for a bite to eat. While eating I was looking up the geocaches close by. Then I saw this puzzle cache called "Elite Bling Series #7 Geocaching Daily News" (GC74AGJ) with some favorite points. I don't usually do puzzle caches because most of the time I can't figure them out. But this one had potential. First the coordinates take you to a war memorial where you had to answer questions for clues... 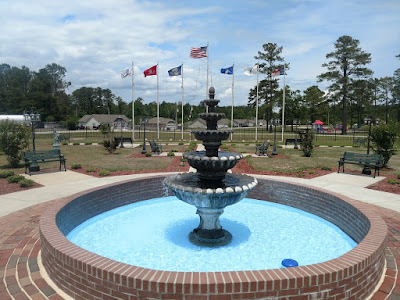 Then drive over to the final location where you'll find this:

Moving on next door to Pender County, I make a quick stop for a virtual cache called "I See the Light" (GCEFA7) at the Topsoil Baptist Church. I gathered the information I needed for the lighthouse and continued on my way. 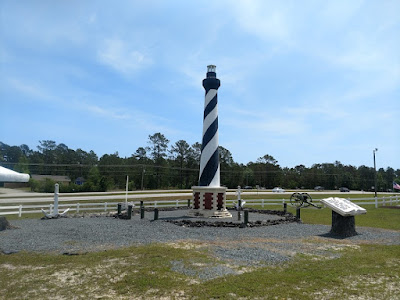 It was a short drive to the next roadside attraction. This next geocache was called Hooper's Tale (GC24PPT), perhaps in reference to a 70's movie. It was located near this giant shark. Not too scary as it didn't have much for teeth. Unless maybe you're afraid of it gumming you to death. 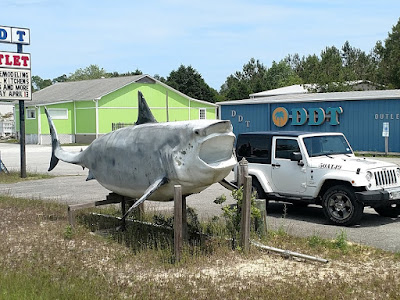 Moving along into New Hanover County, I make a quick stop for another roadside geocache (GC1TZ41).
Driving north on up to the town of Kenansville in Duplin County are my next four geocaches. The first was a virtual cache called Cowan Museum (GC9BBC). The Cowan Museum of History and Science was founded in 1981 within this historic 1800's house. Also on the grounds is a historical park which includes many buildings and a botanical garden. The buildings include a general store, blacksmith shop, log cabin, smokehouse, schoolhouse, and a tobacco barn. 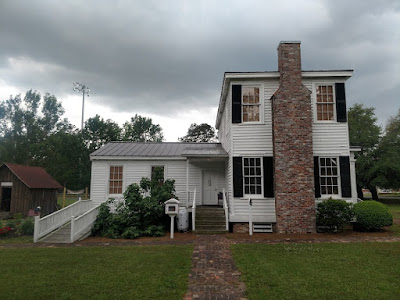 The 19th century general store and Natural Wells Post Office was once operated by James C Boone, who was postmaster from 1892-1903. The structure was located about four miles west of Rose Hill. The building was renovated in 2018. 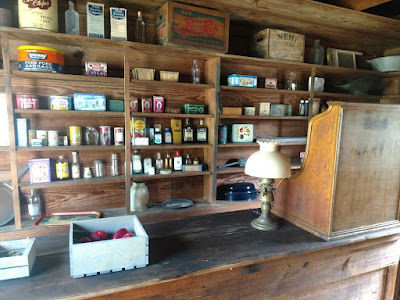 This schoolhouse building was originally a corn crib from the 19th century. Now used as an example of an 1800's one room schoolhouse, it is made of hand-hewed timbers chinked together. 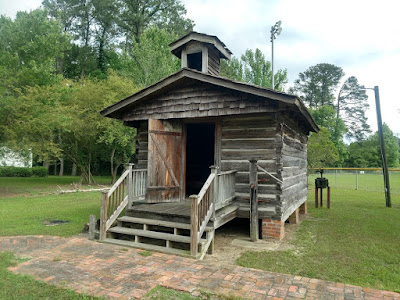 A few blocks away is the "Kenansville Spring Earthcache" (GC178NW) and "The Spring" virtual cache (GC9BBE). According to tradition, a sea captain by the name of Capt. Benjamin Beverett had arrived in the area in the 1740's with his wife Barbara Gastor Beverett and son Jacob. He settled his family near present-day Kenansville, returned to sea, and never returned. The legend continues that Barbara was walking with downcast eyes when she saw a goldpiece. Hoping for buried treasure, she began hurriedly scratching the earth with her bare hands, and she uncovered the spring.
Over time the spring was walled in with brick. Concrete steps and an approach area was installed in 1909. Then once again refinished in brick in 1971. Even though the water became contaminated in 1994, the county turned the surrounding area into a small park and gave the spring enclosure a facelift. The water still flows from its original location, but it is no longer drinkable. 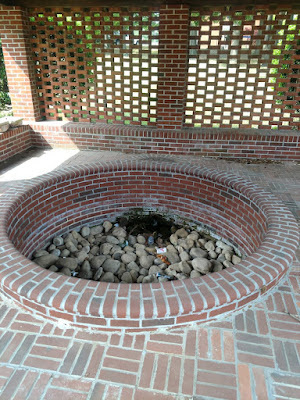 Probably my most favorite location of the day is the "Amp It Up" cache (GC29FE2). Constructed in 1976, The abandoned William Rand Kenan Jr Memorial Amphitheater was once said to be the finest amphitheater in the state. Music reviews and musical dramas were presented July through August and at Christmas by the Duplin Outdoor Drama Society. Long abandoned, it is now in the process of being reclaimed by nature. Sitting there in the peaceful quiet of emptiness, you have to wonder why it didn't have a very long life. The photo below is from the stage area looking up. The first photo at the top of the blog page is from the top looking at the ticket window and entry. 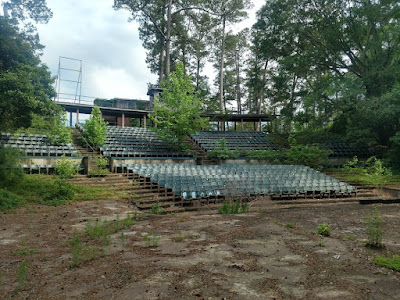 Moving on up to Wayne County, I make a quick cache stops at the Pineview Cemetery (GC5DWAR) which dates back to 1900 and the Grady Family Cemetery (GC5JDB7) that dates back to 1911. Continuing on my way back, next up is Lenoir County and another quick roadside geocache (GC1ADD8). And finally one last stop in Greene County (GC3Y888).
Well that was it for Saturday. Eleven counties and a little bit of history later and I make it back to the rental house in Blounts Creek. Join me back here again tomorrow for a Sunday county caching run. See you soon.
Posted by Mark at 7:32 AM