Hey guys! Welcome back! So if you remember from yesterdays blog, I started working on a solar project in North Carolina this past week. Yesterday, the first Saturday off, I geocached the southeast corner of the state to pickup the missing counties I needed for my geocaching map. Today I'll be taking a roadtrip over to the Outer Banks (OBX) and the northeast corner of the state for more counties. So let's get going... 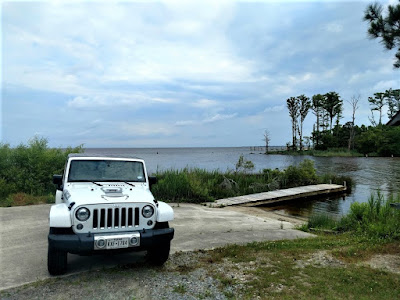 From where I'm staying in Blounts Bay, I first have to go west around the Pamlico River into the town of Washington to pickup US-264 eastbound. By the way, originally called Forks of the Tar, the town of Washington, NC was renamed in 1776 and the first to be named in honor of George Washington.
Sometimes while driving the rural backroads around the country you get to discover some unexpected photo ops that you just have to pull over for. This one was on the way to my first geocache. Driving along US-264 and crossing over Scranton Creek, I spotted this old sailboat that was probably victim of one of the many storms that have hit the Carolinas. My first thought was "GILLIGAAANNN!!!" 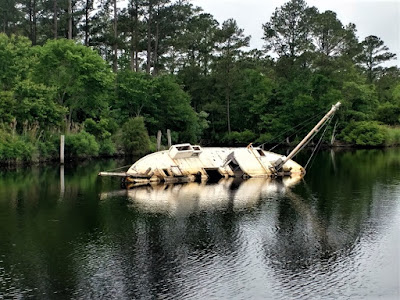 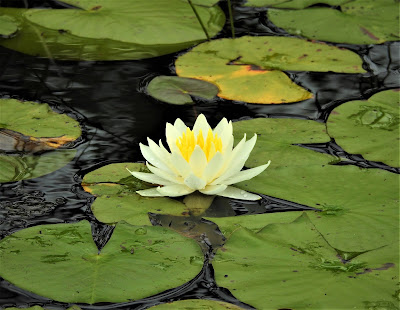 And speaking of storms... my first geocache was in Hyde County. It was located at a roadside historical marker for the Providence Methodist Church (GC57KRV). There wasn't anything to see here other than the sign and a cornfield. But back on September 16-17, 1876, the church was "moved by the hand of God." It seems that the church floated away from the center of town during a flood and landed here. Then the following day when the waters receded, it pushed the church back almost to the exact spot it started in town nearly two miles away!
Moving on up into Tyrrell County, I stopped for a quick roadside cache (GC1FEDM). From there were continued the backroads north into Columbia, NC and picked up US-64 eastbound. Usually driving the backroads you can encounter some unexpected sites. I passed by a Seafood Market with about a dozen of these metal sculptures. Here's just a couple of them. 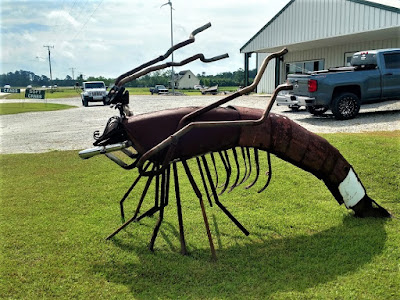 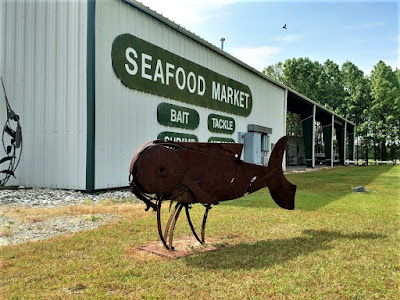 Crossing the Alligator River into Dare County, my next geocache (GC2Y1PC) was at the remains of the old ferry docks. The ferry established in 1931 by W. T. Baum while it was State Highway 90 and gave travelers a way of crossing the river verses driving all the way around to the south. Soon thereafter the state began subsidizing Mr. Baum and providing a free service to users. Upon the completion of US-64 in the 1950's, more traffic arrived and additional ferry crossings scheduled. Eventually a bridge was built over the river connecting both sides of US-64 in 1962 and the ferry abandoned. You can still see the remains of the docks used by so many in the past. 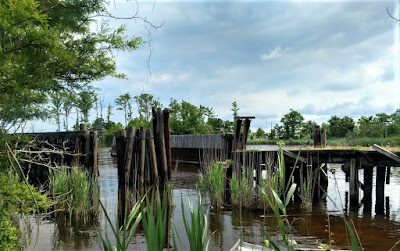 Continuing on US-64 east, I cross over Croatan Sound onto Roanoke Island. It was here where the first English colonists came and attempted to settle back in 1585. On the third attempt 90 men, 17 women, and 11 children were left behind on the island in 1587. By the time the supply shipped returned again in 1590, the colonists had disappeared never to be seen again.
Also on the island are my next three geocaches locates at the Outer Banks Welcome Center. The first one called OBX Velkominne Respite (GC38G6K) was a very creative cache at one of the picnic tables with over 200 favorite points. From there take a stroll down the boardwalk for a rather difficult magnetic container hide (GC4K4NH) about halfway down. 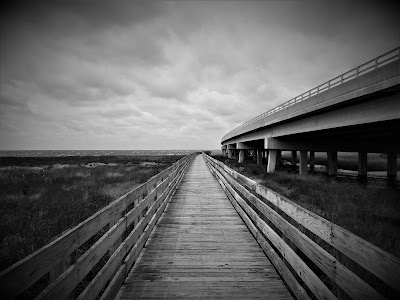 I hadn't planned on spending so much time here. But the caches and the views were worth it. And finally, down at the very end of the pier was the final geocache to be found here (GC477R6). I guess the best way to describe it would be to leave you with a couple videos:

My next geocache in Dare County on the OBX was the most historic and where I spent the most time. "Dawn of Aviation" (GCB57D) is a virtual geocache on Kill Devil Hill near Kitty Hawk. It was on this hill where two bicycle shop owners from Ohio, Orville and Wilbur, built a flying contraption and brought it down here for a test flight. On December 17, 1903, the Wright Brothers made four successful flights gradually increasing in lengths at 120 feet, 175 feet, 200 feet, and finally 852 feet.
After passing both the House and Senate, President Calvin Coolidge signed the act to establish the Kill Devil Hill National Monument on March 2, 1927. The first monument was a 10-ton granite marker placed on December 17, 1928 at the approximate location of the 1903 liftoff and a cornerstone was laid atop Kill Devil Hill for the larger monument. Construction of the 60-feet art-deco designed triangular monument was completed in November 1932. 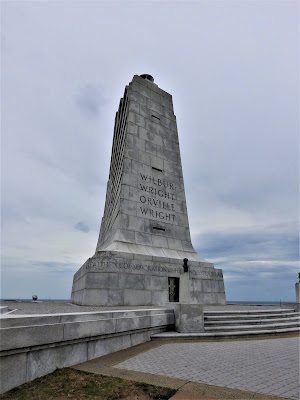 From the monument at the top of the hill looking out over the flight path. The parking and visitor center is off to the right side. 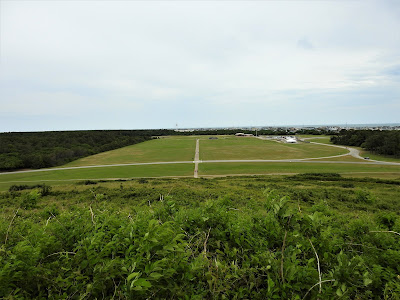 Just one of the many scenes in Sculpture Gardens. These life sized statues showcase the many people, photographers, the plane and more there on that momentous day. 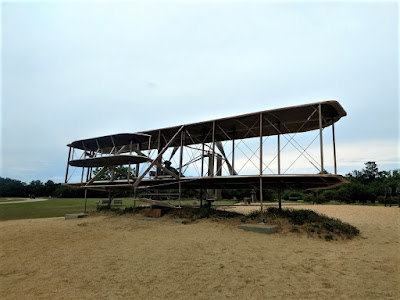 One last geocache here on the outer banks turns out to be a webcam cache. Whenever you encounter a webcam cache you want to try and get it. They're no longer added so once they've been archived, they're gone. "Sun n' Surf" (GC2585) webcam was atop the Shrimp Shack looking out over the pier. How webcams used to work was a two-person activity. You'd have to stand in the correct spot, call someone at a computer who could screen shot the photo. Now with smartphones, you can do it yourself. 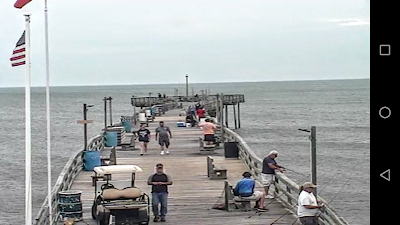 Leaving the OBX on US-158 north back on the mainland. Another one of those "Hey Lookie There" moments! Passing through Poplar Branch, I spot the Grave Digger monster truck and the Digger's Dungeon shop! Oh, I just HAD to pull over for some roadside attraction photos! Posing the GeoJeep next to the oversized Grave Digger of course. And how about the fastest mailbox in the world too. 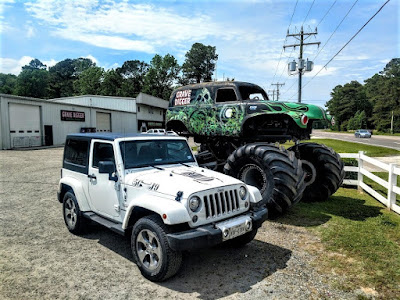 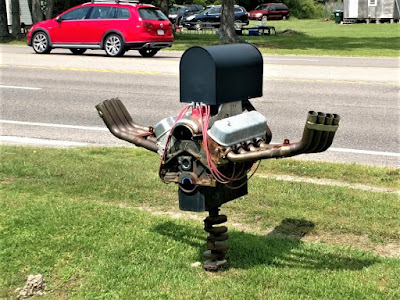 Making my way back, I entered into Camden County and picked up a quick roadside geocache in some trees (GCTEQN). Nothing special about the cache or the place, but I did get a photo of this disturbed young bird that I wasn't sure it could fly yet. It was just hopping from branch to branch. Then just gave me that look like I just woke it up. 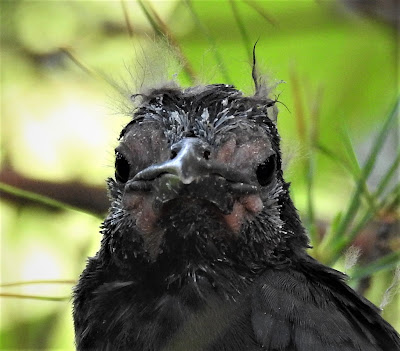 One more quick roadside geocache (GC4MHAH) for Pasquotank County and then I call it a day. Time to get back and prepare for work tomorrow. I picked up a lot of new caching counties this weekend. Hmmm now to plan next weekends county caching run. See you then...
Posted by Mark at 4:40 AM