Welcome back to another one of AwayWeGo's Geocaching Adventure stories. After working all week here in North Carolina, on this Sunday day off it's time to go geocaching and pick up some new counties to add to my geocaching county map. So as I look down this trail into what may be ahead, are you ready to go along for the ride? Are you just as curious? The GeoJeep passenger seat is open. Let's go on a roadtrip and see what awaits us. 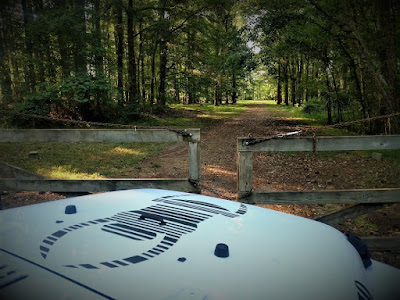 Starting out with breakfast at Hardies in Washington, NC, I drive north on US-17 up to Old Ford on the way towards my first geocache. Before I get to the geocache, I see this old church building to my right across the street from the Old Ford Church of Christ on my left. I quickly pull over and take a few dozen photos.
Now I can't just leave it at that and keep you interested. So I start doing some research. Not much on the web via normal searches. But I did find an old newspaper article from November 11, 1928 which describes a centennial celebration. The Old Ford Church was at first a Calvinistic Baptist Church founded by Joseph D. Biggs and Jeremiah Leggett in October 1828 with 20 members. Between 1831 to 1833, Pastor Leggett swayed them towards the Church of Christ. As the membership grew over the years, they outgrew this building. 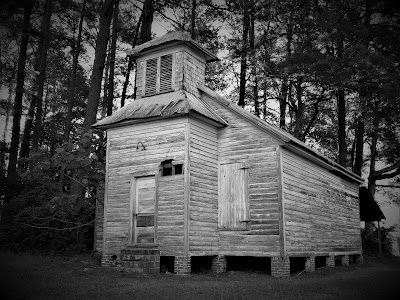 Further down NC-171, I also spot this old 1956 GMC Pickup Truck just rusting away in somebody's yard. That would be so cool to restore or turn into a radical resto-mod. If I only had the time or money. Well mostly the money to be able to do such a thing. 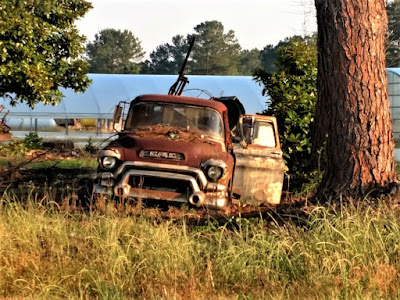 Now I finally stop for a quick roadside cache (GC42NQV) down a country road before arriving at my target geocache for Washington County. The Roanoke River Lighthouse (GC10RGW) in Plymouth is actually a replica of the lighthouse that used to be at the mouth of the Roanoke River in the Albemarle Sound in 1866. 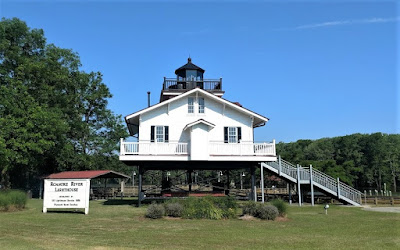 There's also a boat museum next door with a few old wooden boats used on the river. 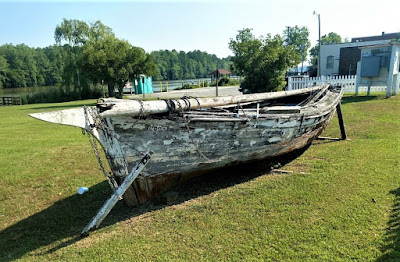 Continuing down the river front in Plymouth, I arrive at the next geocache and Civil War history. The C.S.S. Albemarle (GC5NEHF) was contracted by the Confederate Navy in 1863. Gilbert Elliot, a 19-year-old engineer, constructed an ironclad gunboat designed by John L. Porter, the navy's chief architect. Elliot built the vessel at Edwards Ferry on the Roanoke River, 60 miles upstream from Plymouth, where his "shipyard" was Peter Smith's cornfield. It took more than a year to construct the C.S.S. Albemarle , which was 158 feet long and 35 feet wide, and topped with a 60 foot long casemate sheathed with two layers of two inch thick iron plates. Inside the casemate, two large Brooke Rifled cannons could fire hundred pound shells. An 18-foot long white oak ram, also sheathed with iron plates, extended from Albemarle's bow to puncture the sides of wooden vessels and sink them. 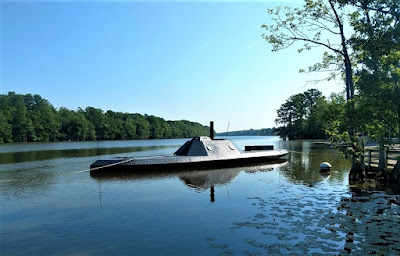 Albemarle saw first action on April 19, 1864, during the Battle of Plymouth, when it rammed and sank U.S.S. Southfield. It also indirectly caused the death of the Federal Fleet's Commander, Charles W. Flusser. A shell fired from Flusser's ship, U.S.S. Miami, at Albemarle bounced off the iron plating back onto the Miami and exploded, killing Flusser, who was standing next to the cannon that had fired the shell.
On May 5th, in an engagement in Albemarle Sound, the Albemarle engaged seven US gunboats. Despite being outgunned 60 cannons to two, outshelled 557 to 27, and rammed, the Albemarle escaped destruction. The ironclad was finally torpedoed (blown up with a mine on the end of a wooden spar) on October 27, by a motor launch commanded by Lt William B Cushing, and sank. The Federals recaptured Plymouth on October 31st.
Outside the Port O' Plymouth museum sits a replica of the 6.4 inch Brooke Rifled Cannon. Developed by Commander John Mercer Brooke (CSA), who served as Chief, Department of Ordnance and Hydrography. While closely resembling the Parrot Gun used by the Union, the Brooke Rifle is considered to be the finest cannon on both sides of the war. The fact that the bore had rifling, or spiraled grooves in the barrel to spin the projectile, made it extremely accurate. While the two original cannons from the Albemarle are on display at the Norfolk Navy Base, inside the Plymouth museum are some of the original shells fired from the Albemarle. 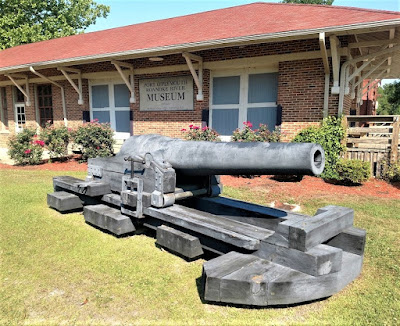 Entering into Bertie County, I drive over to the north side of the Cashie River to catch a ride on the Sans Souci Ferry. There was a virtual geocache halfway across. But the ferry was closed and I wasn't able to get the find. But there was a recently placed traditional cache (GC85629) on the north bank of the river and I was able to retrieve and sign the log for it.
Continuing may way around to the north side of Albemarle Sound, I make my next stop at the Beaver Hill Cemetery (GC84AZ7) in Chowan County. The geocache highlighted the sadness and struggles of the Littlejohn Family living in the late 1700's. According to the Find-A-Grave website, the cemetery dates back to 1778 and Catherine Littlejohn who lived only 6 days. Only four of the twelve Littlejohn children lived beyond age 20. And Catherine was just one of four Littlejohn children who didn't even make it to see their first birthday.
There are now more than 6000 permanent residents in the Beaver Hill Cemetery. This angel statue was located within the cemetery and looks over those here. 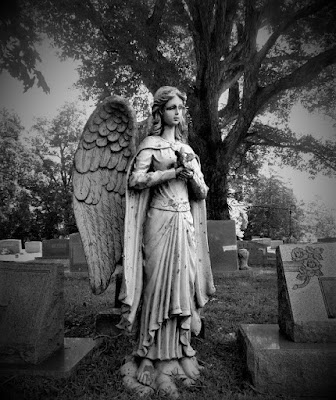 Across the creek from the southeast corner of the Beaver Hill Cemetery, is the Providence Burial Ground (GC84E7C). From the plaque: "Established in the late 18th century, this African-American cemetery is the final resting place for free blacks, slaves, and emancipated people buried here through the late 19th century. Among those interred here are several family members of Thomas Barnswell, a free black property owner; Molly Horniblow, a free black businesswoman and grandmother of author and abolitionist Harriet Jacobs; and Jonathan Overton, a free black veteran of the Revolutionary War, a Private in the 10th NC Regiment of the Continental Line." (2001) There wasn't much to see here anymore. Just an empty lot with a couple headstones remaining and a few place markers.
Continuing on US-17 east, the next county over was Perquimans County. Located in the town of Hertford along the banks of the Perquimans River is a virtual geocache at a historical house (GC4740). The 1730 Newbold-White House is one of North Carolina's oldest examples of colonial architecture. The house served as an important meeting place for the state's Quaker congregations as well as a center for governmental courts and assemblies.
A land grant from the Lords Proprietors to Joseph Scott for 640 acres included this tract of land and house site. Personal journals of Quaker missionary George Fox describe a meeting with Joseph Scott and his neighbors at his home in 1672. Later Scott, along with his family and neighbors, established their own Quaker congregation. Following the death of his first wife, Scott married Mary Hudson in 1683. Until her death in 1692, Mary Hudson Scott opened her home as a meeting place for Quaker congregations.
James Coles and his wife, Mary, bought the land in 1703. The property was sold at auction in 1726 and was bought by Abraham Saunders, a Quaker and planter. Saunders most likely built the one-and-one-half-story brick dwelling that later came to be known as the Newbold-White House. The name Newbold-White derived from its last two private owners, Jim Woodward White and John Henry Newbold. The Perquimans County Restoration Association, Inc., purchased the house in 1973 with the intention of preserving it as a historic site. 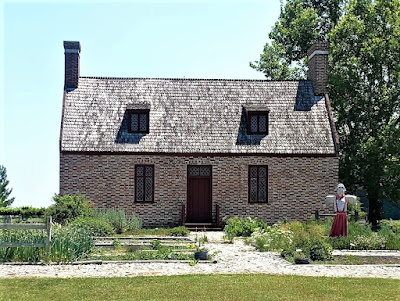 One more northeast county to go and I wasn't going to pass up without it. I did that back in Texas and had to take a weekend to go all the way back to the north corner to finish the state. Turned out on US-158 east into Currituck County. There were two caches on my target and was looking forward to going after them cause they were on a 4x4 Jeep trail. (GC51Q5F, GC51Q0T) Well I got as far as I could go in the GeoJeep. The rest was bushwhacking through tall weeds and brush in humid 95 degree temperatures. Naw, I'm not up for that right now. Back out to the Hwy and a few more miles for a quick roadside cache (GC7Q131).
Working my way back westbound now, I drive across the top of North Carolina on US-158 into Gates County. I stopped for a quick cache (GC3D5JG) down in Gatesville, NC in a little park at Bennett Creek. No bushwhacking required here. 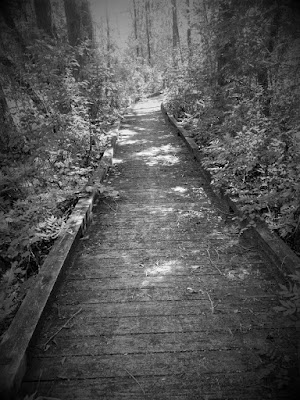 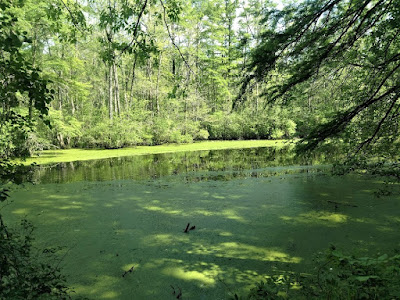 Taking a different route back, I enter once again into Hertford County. I stopped for a quick roadside geocache (GC5NECT) near a historical marker. The marker reads: "A detachment of United States troops burned Winton on February 20, 1862. The first town to be burned in North Carolina during the Civil War."
Re-entering the westside of Bertie County, I make a quick stop for a cache at the Hoggard Cemetery (GC1NV7W). There's just over 300 interments in this cemetery with the oldest dating back to 1908.
A few more miles down the road from the cemetery, I passed by this huge abandoned house now being overtaken by nature. Looks like it was once a majestic plantation home. I wonder what happened. Who lived here? Why was it abandoned? Sure would be cool to go exploring inside and see what stories I could find. 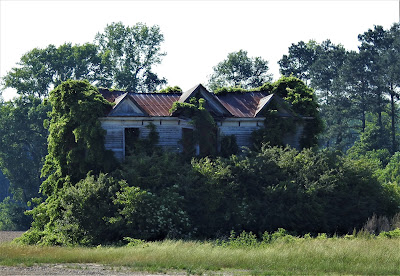 Now in Martin County I had several geocaching stops. The first was a geocache at the Oak City Cemetery (GC1NV7B) which dates back to 1905. Then gas and a cache in Oak City (GC1NV79).
A quick scenic geocache stop at Conoho Creek (GC5FNJ5). Finally, I arrive at the scene of the first photo at the top of this page. The Fort Branch Confederate Earthen Fort Civil War site (GC5DDC, GC56HZ7, GC5NEF2) is located two miles below Hamilton, North Carolina and 60 miles upriver of the town of Plymouth. Sitting 70 feet above a bend in the Roanoke River, this Confederate earthen fort provided a safe and clear view of Union gunboats approaching from down river. 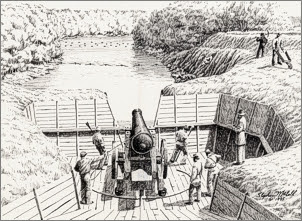 Eleven cannon offered significant protection for the railway bridge over the river at Weldon, a weak link in the "Lifeline of the Confederacy" between Wilmington, NC and Richmond, VA. The fort also protected the nearby construction site of the ironclad ram C.S.S. Albemarle which later helped regain control of the lower Roanoke River and Albemarle Sound by sinking wooden Union ships. Citizens of the entire Upper Roanoke Valley benefited from the fort, as well.

Well that's it for today. I picked up some new counties today to fill in my North Carolina map. Next weekend is a 3-day holiday weekend. Gotta plan a weekend roadtrip to get the western counties and hopefully complete the state. Please leave your comments on my blog, good or bad. I look forward to hearing from you. See you soon...
Posted by Mark at 9:59 PM