Welcome back fellow geocachers, travelers, explorers, and Jeepers. Today is cemetery day it seems. On this 300+ mile backroads roadtrip from Central to North Central Texas, I visited several cemeteries searching for history and a ghost story to tell. As usual the passenger seat in the GeoJeep is open, so climb in and let's take a drive through the spooky alley of trees down the middle of the cemetery. 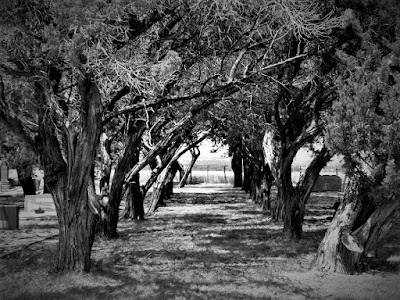 Leaving Killeen, Texas, my first stop as usual is the Dunkin Donuts for an iced coffee and a bagel. Then US-190 west to US-183 north in Lampasas. I make a quick stop for a geocache (GC435CN) at the radio station in Lampasas which for some reason I always skipped before. But today it seemed to be calling for me to stop.
I exit off US-183 near Bozar onto FM1029 going off some very rural backroads driving heading north to my next geocache (GC370W1). Upon arriving at the Trigger Mountain Cemetery I stopped for a photo by the sign and felt that I just had to wear the hat also with a name like Trigger Mountain! 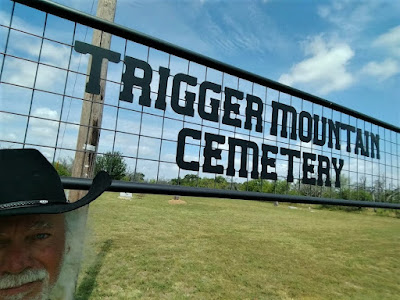 The Trigger Mountain Cemetery is a rather large cemetery for just 13 interments here. But it is also well maintained by the very small community. The first listed burial here is that of 5-year old Riley Burgess Hays in 1904. His father, the Rev L. L. Hays is also buried here and lived to be 99 years old passing away in 1961. The cemetery is still in use today with the most recent burial in 2018.
Down another dirt side road about a half mile was Trigger Mountain Hunting. The small geocache (GC3CEEF) had a difficulty rating of 3.0 and a terrain rating of 3.5. Tucked away in the trees, brush, and weeds, it was not an easy task on this hot July afternoon! But success was had and I was able to sign the log.
Continuing down the very rural dirt backroads, I came to the next geocache at Brown's Creek (GC3BYJ4). Down a steep embankment to the creek, this small cache a D4/T4 rating. But with the water currently shallow, I was able to keep dry and stick to the taller rocks to make my way across.
After leaving the creek and just down a little further I came across a cemetery with a historical marker. I check my phone again but I'm not showing any geocache listed here. So I check out the cemetery and read the historical marker: "North Brown Cemetery was named for creek followed by homeseekers. This burial ground originated about 1857 when death struck at a nearby campsite. In the 1870's, North Brown farming community surrounded this site. It had a school and held church services in the schoolhouse. In 1895 local leaders A. A. Boulter, G. M. O'Quin, and J.S. Weatherby secured a deed to the acreage in which graves had so long existed, and North Brown Cemetery Association was formed. After school had closed, proceeds from sale of its site were pledged in 1967 for cemetery care. Pioneer families continue burials here." 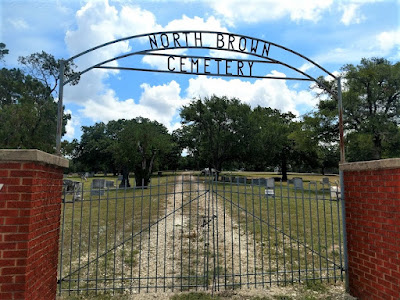 Well I just couldn't let this historical cemetery and these pioneers go unnoticed. So I found two headstones of original pioneers and hid my own geocache in a nearby tree (GC8BNKX). 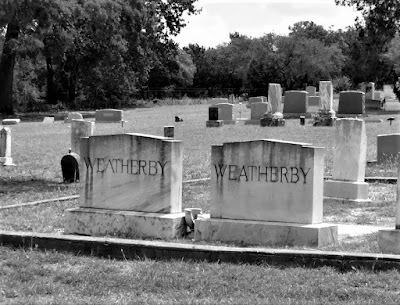 Working my way through the backroads to the small town of Priddy, I had two cemeteries and two geocaches to find. The first was at the St. John's Cemetery (GC22Z1J) with just over 600 interments dating back to 1902. The other was the Zion Lutheran Cemetery (GC19E1A) with over 200 interments dating back to 1889. This older cemetery contains most of the early German settlers to the town of Priddy and has this kinda spooky entrance with the rows of trees. I couldn't decide which I liked better this color photo or the black/white which I opened with at the top of the page. 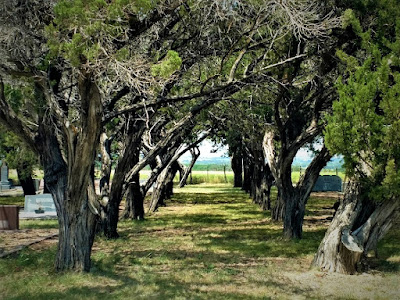 Trying to make up some time now, I make my way back over to US-183 where I can move a little fast and put some miles behind me. One quick roadside geocache (GC5MVPM) and continue on my way.

But as usual I soon find myself off on the backroad headed towards another cemetery geocache. This one was for the Routh Cemetery (GC1NTWE) in a little community called Blanket. Supposedly named by a couple of surveyors who happened upon some Indians taking shelter under blankets placed over some bushes to give them some protection from a rain storm. As for the cemetery, the oldest marked grave is for that of 19-year-old Elizabeth Routh who died in 1876. She was the daughter of Simeon Levin Routh who is believed to have brought his family out here from Tennessee as part of the Peter's Colony Group to help settle Texas in the 1840's & 50's. Simeon was laid to rest here in 1890 along with his wife and many of their children. There are 58 interments here in total with the most recent in 2005.
Still on the rural backroads, I don't know if you could call this next one a ghost town when at it's peak it only had 100 residents. Owens, Texas, also known as Clio (GC2QM9D), is located eight miles north of Brownwood on U.S. Highway 183 in central Brown County. The town was settled in the early 1870's. The post office, granted in 1878 as Clio, was renamed for E. Owens, who donated the townsite in 1910. It closed sometime after 1930. John W. Yantis promoted sawmills in the area. In the 1930's the town had a school, a church, two businesses, and a number of scattered homes. In 1949 Owens had one business and a population of 100. In 1953 it had a population of forty and no businesses; and in 1965 the population was sixty. No census data was reported for Owens after 1965. In 1983 the community had two churches and a single business. It was still shown on county highway maps in 2000.

Making my way back to US-183, I'm still on the rural dirt and gravel backroads when I pass by this one house with an old 1969 Corvette just sitting there with no tops covered in dirt and dust open to the rain and weather. Made me sad to see that beautiful car being neglected. 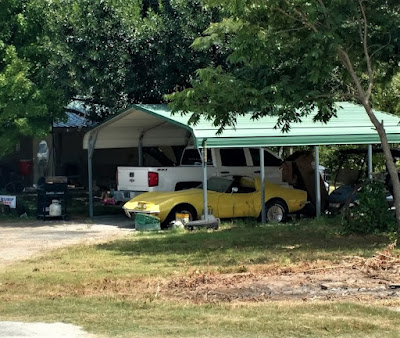 So now I start driving north on US-183 again and after a little bit I see a sign for a cemetery. I look at my phone but don't see a geocache in the area. Well I just have to investigate that further. It is sad finding cemeteries in such neglected care. The rusty sign above the gate just has the name Reagan on it. I can't find much information about this cemetery other than those who are buried here. The Find-A-Grave website shows there to be 14 burials, 12 of those between 1879-1955 and the other two in the 1990's. Though the odd thing is that I can't figure out why it is called the Reagan Cemetery. There are no Reagan's interred here and I can't find a ghost town or community called Reagan. Another website states that it also goes by the name of Latham of which there are two here by that name from the 1880's. Oh well, I find a spot and hide a cache here myself (GC8BNM4). Maybe somebody else will come along and shed some light on this place. Maybe bring some lawn equipment as well! 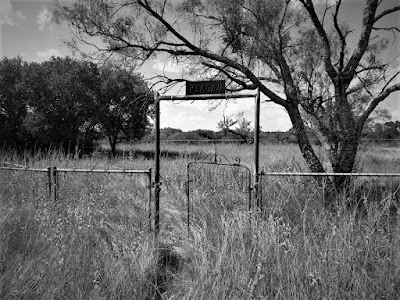 My last stop was for another geocache (GC22W7R) nearby in the ghost town of the Yellow Mound Community. I couldn't find much in the way of history and settlement. It had never really developed into an incorporated town. Just some local ranchers and farmers. Looking through newspapers for references of Yellow Mound, they started appearing in 1890 and slowed except for obituaries in the 1960's & 70's. Stories of oil discoveries and drilling in 1919-1930, then those stopped. Probably had a surge of workers during that time, but they too moved on. The most interesting newspaper story I found was on July 7, 1964: "Skeleton Discovered in Pasture" read the headline.

"A skeleton thought to be that of a man was found Monday under some undergrowth on a farm near the Yellow Mound Community, seven miles NW of Eastland. Sheriff Lee Horn, one of the officers who went to the scene, estimated the skeleton might have been there as long as 10 years. He based his opinion on the condition of the bones and a weathered shoe along side the skeleton. The find was made by a farm worker rounding up some calves. The sheriff said he would ask a dentist to check gold dental work in the hopes of establishing identity. About five years ago, a skeleton was found near Cisco, 10 miles west of Eastland."
I never did find a follow-up story to this one.

Getting close to work home in Munday, Texas, I was passing by the Brushy Cemetery. I stopped, but by this point it was 6:30 PM and I had already turned a 4 1/2 hour drive into almost 9 hours. Plus it was hot and I was ready to relax, eat, and settle in for the day. With the wind turbines as I backdrop, I thought it was a decent photo. Grabbed my phone, snapped a pic, and continued on. 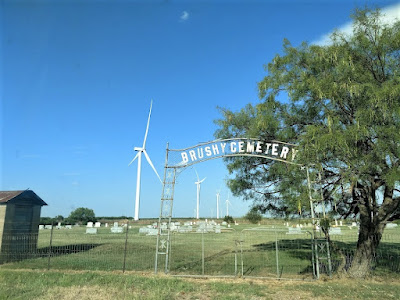 That's it for today. I hope you enjoyed the ride and my stories. I hope to see you back again soon for another of my geocaching adventures through history.
Posted by Mark at 5:30 AM