Welcome back friends. Today's adventure is a little bit different than most of my others. There were no geocaches to be found today. I had first seen this video about a year ago of some Jeeps driving through and across the James River and it looked pretty cool. I had forgotten about it until recently. Realizing that we'll probably be leaving Texas for the east coast soon, I looked it up again to try and figure our exactly where it was to drive the trail ourselves. So hop on in the GeoJeep and let's ride some backroads, gravel roads, dirt roads and some water crossings down the James River Road. 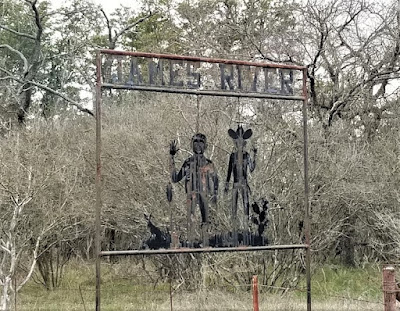 The James River Road closely parallels the river along the north half but then eventually splits off and separates as it goes south. But not before it crisscrosses over a couple of times. That's where it gets fun for the high clearance off highway vehicle owners who don't mind getting a bit dirty!

And the more rain you get, the more mud there is to play in!

So from the town of Mason, take US-87 south for a short way before turning south on 1723. After a few miles make another right onto 2389. Follow it down until you pass the Llano River, then look for the James River Road turnoff on the right shortly thereafter. Most of the drive is like any other dirt/gravel road, but there are some low water crossings and scenic spots too.

On this day that we drove through here, along with the water crossings, there were also some dry swales too which was kinda odd. But it just added to the various scenes and types of terrain.

Seeing these mini caves and erosion holes in the swale walls above, I thought they'd be some great hiding spots for a geocache. This would test the geocacher to see who's brave enough to reach inside and grab the container.

After an hour or so, we finally arrived at the major crossing of the James River. I've crossed some small creeks before, but none this wide. From inside the Jeep, crossing the river was pretty cool. Once on the other side, I dropped Candy off and drove back across. I wanted her to get a video of the GeoJeep crossing the river. Watching the video afterwards, it doesn't look all that spectacular. The video I had seen a while back was taken from a drone so you're looking down on all the water with the Jeeps crossing over. I guess I need to get a drone for the next time.

After the wider crossing of the river, the road got a bit rockier as we continued south which made for slower traveling. And since the road turned away from the James River, that was the last of the water crossings.

After about four hours on the river road, we eventually made it out and back to the main roads eventually reaching the highway. We still had a few hours getting back to McCamey in West Texas.

It was a fun day out exploring the backroads. Hopefully by sharing this story with you I've made it interesting enough that now it's on your bucket list of places to visit if you're ever in Mason County, Texas.
To follow along on our travels and keep up with my latest blogs, you may do so here of course. But also by using you favorite of these social media platforms: Facebook, MeWe, Gab, Reddit, Parlor, Twitter, and Instagram. These all link directly to my profile. Again, please feel free to comment and / or share.
Posted by Mark at 10:11 AM