2020-03-28: Roadtrip Day 2: Driving Through Louisiana and into Mississippi on the way to Georgia

One thing I like about driving the backroads and byways on a roadtrip is that you never know what you're gonna see around the next corner. Whether it be a scenic overlook, a piece of history, or just something so crazy funny that it requires you to turn around for another look and capture it with a photo. Todays drive had something for everyone. So there's a lot to see now let's get rolling... 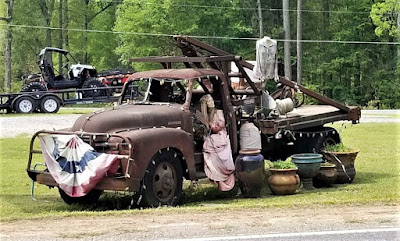 After waking up early in Shreveport, Louisiana and going for breakfast, I grabbed a quick urban geocache that was close by (GC7G3XD).
On the way to my next geocache, I passed this old church building. The sign out front said Antioch Baptist Church. It doesn't look like this facility has been used in many years. In preparing to write this blog post, I spent a few hours trying to research some history but kept coming up empty. I can't find anything on this old church. 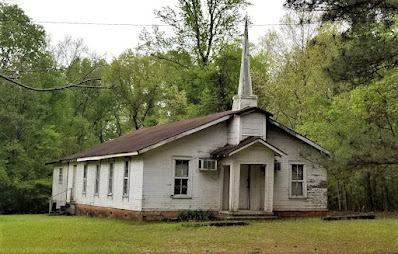 So I arrive at the next geocache (GC1XVN5) which was just a simple and quick roadside cache to add a new county into the finds list. Upon arriving though and seeing the sign, I guess they take their "No Trespassing" pretty serious! I found the cache quick and got myself outta there! 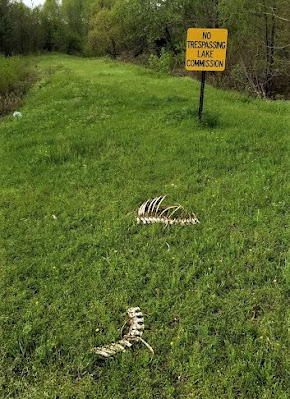 After another quick roadside geocache (GC7QJ0X), I passed by these two old abandoned houses that were just slowly decaying and falling apart. I'm always curious as to what happened with these homes... 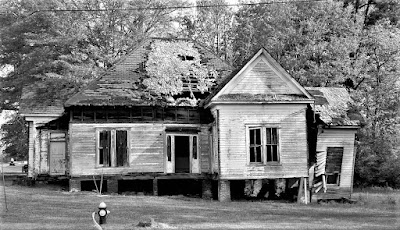 ...especially this second house. It looked like it would have been a house to envy back in the day. Come to find out that it is called the Garland House. It was built in 1902 and placed on the National Register in 1994. It is a Queen Anne Revival design. This one is in great need of reviving. 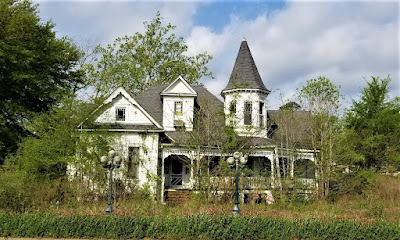 Continuing eastbound on Hwy 2, the next geocache was at the Corney Creek Calaboose (GC26WWQ). A calaboose is a tiny jail. This calaboose in the town of Bernice, LA was built in 1902. The town of Bernice was established in 1899 as a sawmill town after Captain C.C. Henderson built the Arkansas Southern Railroad. 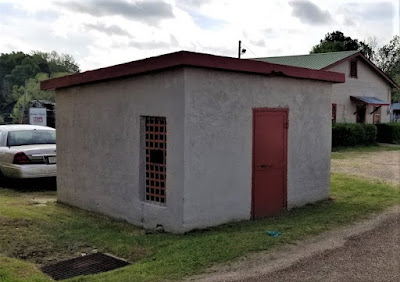 This next stop was rather sad. On the north side of Bernice is the old Mount Olive Cemetery (GC26HGV). This neglected forgotten cemetery contains between 40-50 burials dating as far back as 1860. However, I only saw less than 10 headstones in all this overgrowth. Some of the locals need to come out here and clean this cemetery up. 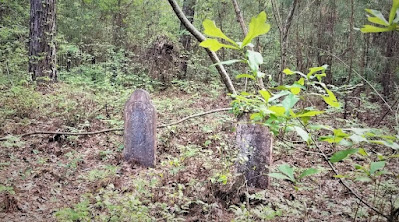 Still following State Highway 2 eastbound to pickup caches in these northern parishes, my next stop is an earthcache and a traditional cache at Elgin Springs (GC20PEP, GCJ4CV). It would have been a quick roadside stop, but I had trouble finding the traditional cache and had to DNF it. As for the earthcache, I got what I needed to answer the questions to log a find. No photos here since it really isn't much to see here. Not exactly what you picture in your mind when you think of natural springs.
To make up for the lack of photos at the springs, I was able to capture two great old car pics as an unexpected surprise. This one below of a 1920's sedan just rusting away among the trees along the highway. And the more humorous one I opened with at the top of the page. 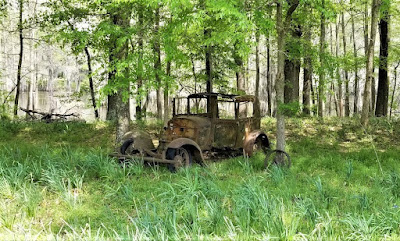 These next two were just quick roadside park and grabs (GC73X26, GC23FEX).
Our next stop was a really cool piece of history in Oak Grove, LA. The Fiske Theatre (GC29ZM9) was first opened in April 1928 and at that time was the premier state of the art movie cinemas in Northeast Louisiana. It was owned and operated by the late Donald Fiske of Oak Grove. The Fiske Theatre was a two level cinema with a first floor that seated 500 people and a balcony that seats 250, as well as a cry room located on the back of the first floor for mothers with small children.
The Fiske Theatre was rebuilt in 1950 and relocated from just down main street to it's current location, and was operated continuously by the Fiske Family until 1987 as a first run cinema. It looks just about the same now as it did in the 1950's. In 1987 as Mr. Fiske's health began to fail him, the theatre was donated to the West Carroll Chamber of Commerce where it has been used mainly for gospel music concerts and other community events since then. 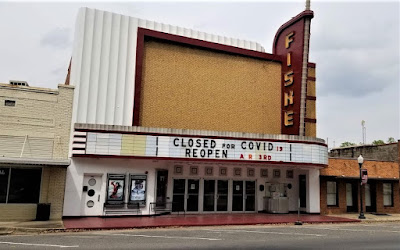 The theatre is in very good condition thanks to the hard work of the chamber volunteers and numerous grants for upkeep from the Louisiana State Legislature. After a two-month renovation period in the fall of 2008, the Fiske Theatre returned as a first run movie theatre on December 15, 2008 with a showing of "Fireproof". The theater is run by volunteers who share a passion for the preservation of this historic movie theater. Any proceeds go to the upkeep of this terrific piece of Americana. At the time of our visit to the Fiske Theatre was closed as the pandemic was just beginning to spread.
Next up was a geocache at the Cotton Museum (GC1CN8D). The Louisiana State Cotton Museum in Lake Providence provides a great introduction to one of Louisiana’s major agricultural crops, and certainly the one for which the Delta area is best known. Its main gallery features an extensive set of interpretive exhibits, including life-sized dioramas, farming equipment, a re-created juke joint and more, all packed into a replica gin house (where cotton fiber was ginned, or separated from the seed). 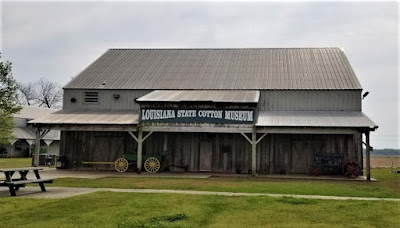 Also on the grounds of the museum is an impressive array of old plantation buildings, such as a sharecropper’s cabin, a schoolhouse, and a small chapel. And of course an old outhouse where the cache was hidden inside the business deposit area. 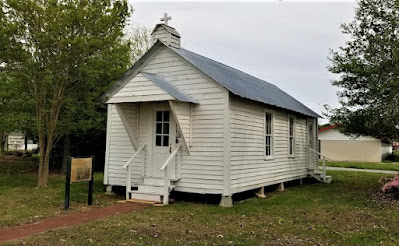 One more quick roadside geocache in the town of Transylvania (GC1CN8Z) along with the above museum are two caches for the East Carroll Parish completing the northern counties in Louisiana.

Now we face the Mississippi River and need to cross over. Most would go south to I-20 and cross over into Vicksburg. Been there, done that, and already have those counties. So I turn north into Arkansas. I stop for two quick geocaches along US-65 for Chicot County (GC2QTFT, GC2R0NT). Then took US-278 to cross the great river.
Passing through Greenville, Mississippi, I spotted this riverboat and stopped for a quick photo. 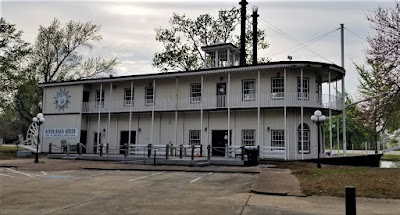 The next few stops were part of the Mississippi Blues Trail. In the small town of Holly Ridge you'll find the final resting place of three bluesmen (GC15CJ1). Charley Patton (1891 - 1934) was the most influencing figure in the pioneering era of the Delta Blues. He helped define not only the musical genre but also the image and lifestyle of the rambling Mississippi bluesman. He roamed the Delta using Dockery as his most recent base, and lived his final year in Holly Ridge. Patton and blues singers Willie James Foster (1921 - 2000) and Asie Payton (1937 - 1997) are buried in the Holly Ridge Cemetery.
In the next town of Indianola, MS, I found the B.B. King Corner (GC4MZKG). It was on this corner, when Riley B. King was just a young man of 17, that locals first heard the musician destined to become the "King of the Blues." On June 6, 1980, BB King placed his handprints and signature here in the sidewalk to the left of the guitar. 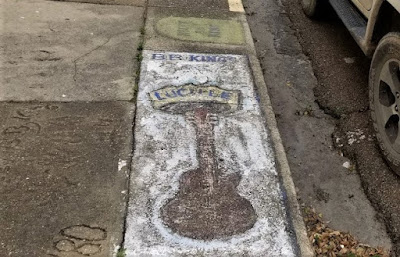 Our last geocache of the day was at the Indianola City Cemetery (GC30XD5). This is a large well maintained cemetery with over 3,000 interments. 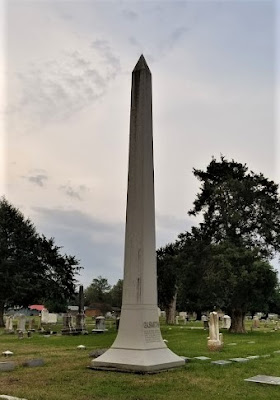 We ended the day in Greenwood, MS, a little more than 300 miles after we started. I picked up some new counties and parishes to fill the map. And we saw a lot of great roadside attractions, planned and a few surprises too. Tomorrow is another day and we still have a long way to go and a lot to see. I hope you come back and join us. See ya next time...
To follow along on our travels and keep up with my latest blogs, you may do so here of course. But also by using you favorite of these social media platforms: Facebook, MeWe, Gab, Reddit, Parlor, Twitter, and Instagram. These all link directly to my profile. Again, please feel free to comment and / or share.
Posted by Mark at 1:50 AM