ROADTRIP!! Well my part of the project in West Texas is completed and it is time to move on to the next! And that begins our roadtrip to Georgia. Now if you follow Google Maps you'll be taking I-10 all the way across for a quicker yet boring drive. Where's the fun in that? We'll be taking the backroads, the US highways and byways, finding geocaches, exploring history and discovering cool places. So as the song goes: "Eastbound and down, loaded up and...", well we're not truckin' but definitely got the GeoJeep loaded up and packed full. So let's hit the road and see where it takes us.
Day #1 of our roadtrip has us leaving McCamey, Texas on this Friday morning and first stopping in Killeen. There we unload and reload the Jeep trying to figure out what we might need to bring to the east coast. We'll be doing some work in Georgia before starting a new project in Florida. Packing the Jeep with as much as we can fit into it, we get back on the road. I'd like to at least make it out of Texas by the end of the day.
Taking I-35 north, our first geocaching stop was in Waco at the Greenwood Cemetery (GCTE6D, GC68NMY). It was an older cemetery dating back to 1875. One of those interned here is Jules Bledsoe. Born in 1899 and a native of Waco, he was a baritone singer and one of the first black performers on Broadway. He is best known for his song "Old Man River" from the musical "Showboat."
Leaving Waco, we got off the Interstate and onto the backroads of Highway 31 eastbound over to Tyler, TX. There we made a stop at the Rose Hill Cemetery for two more geocaches (GCW154, GC79EF). Two of the headstones that caught my attention were this giant sized piano for an obvious aficionado of the ivory keys. The other I found to be ironic was a simple small cross with no other words except for Big Daddy. 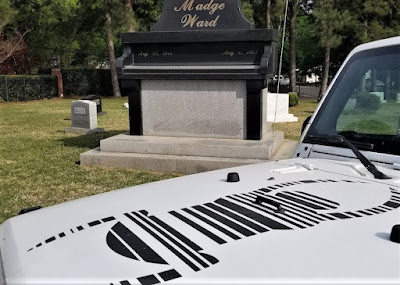 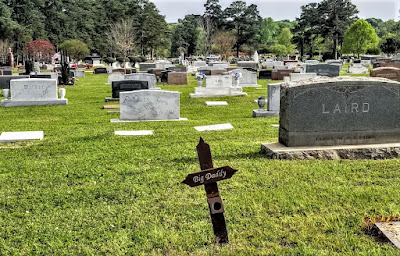 From there we drove up US-271 to Gladewater, TX. While there we stopped for a few geocaches, the first being a virtual at the Veterans Memorial (GCJ0XJ). On the wall next to the memorial was this mural painted on the building. I am assuming that it represents a kinda history of the town. Just not sure about the red-masked Captain America / Scarecrow looking character though.

On the way to our next cache in town, we passed by this beautiful house with a historical marker out front. The house belonged to a Dr. E.L. and Nanny Walker who came from Tennessee to visit E.L.'s brother here in Gladewater in the 1890's and decided to stay. He opened a medical practice and drugstore and purchased this site in 1895. This home was completed sometime prior to 1910.
The Walker House with it's main body constructed of concrete blocks is neoclassical in design, with a symmetrical facade, pronounced 2-story portico, ionic columns, five-bay front and pedimented dormer window. The three-story structure also has two concrete basements. Initially intended for use as an infirmary, the third floor space served as an attic with access to a rooftop widow's walk. Original features included ten fireplaces, a two-floor elevator, and fifteen rooms. Changes over the years included additional rooms and the removal of the elevator during the WWII scrap metal drive. The house remained in the family until 1969. 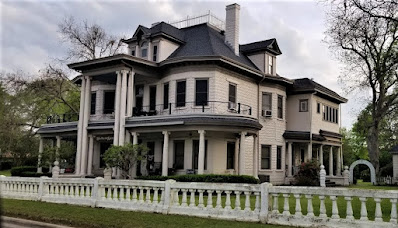 Another of the Gladewater's geocaches brought us to an area highlighting the areas oil discoveries (GC3NJH5). Another historical marker at this site reads: "On April 7, 1931, this wildcat well drilled by Selby Oil and Gas Co. of Tulsa, OK, came in at 1000 barrels an hour. Located in the Sabine River Bottom a mile south of town, it connected Gladewater to the vast East Texas oil field stretching from Longview to Kilgore. Royalty owners were the Snavely family of Martinsville, IL. Headed by Judge Herschel Snavely, nine relatives came to watch the drilling. L.C. Snavely acquired interest in this land when several Illinois investors underwrote the sawmill and lumber operation of James Moore who in 1906 bought 42,000 acres for $20,000 and moved his enterprise to Gladewater by train. Moore's mill was destroyed in 1913 by a boiler explosion. In 1914 he surveyed and divided the land into equal sections. Investors drew lots to determine their parcels. Oil was discovered under the entire 4200 acre tract. Texaco operated the well from 1938 until its shutdown in 1957. Texaco closed its local office in 1987 after 54 years in Gladewater, and donated this pumping unit from the Texaco-Snavely 'A' Lease #1. The original derrick was wooden." 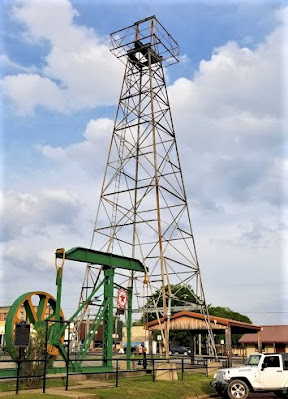 Gladewater is also known as the Antique Capital of East Texas. One of the antique shops in town looks kinda "antique-ish" itself! 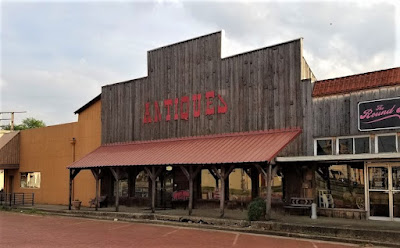 And for the last geocache in town, I went to the Rosedale Cemetery (GC2208R). After finding the cache, I did spot this rather interesting headstone. I guess after the oil dries up, so does all the easy money. 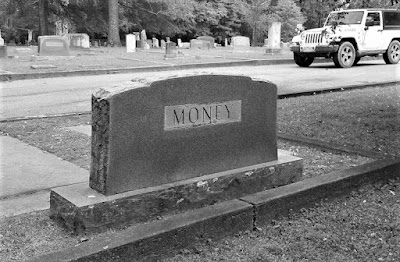 We finished the day by driving over to Shreveport, Louisiana and checking into a hotel. After just over 600 miles of driving, it was time to call it a day.
To follow along on our travels and keep up with my latest blogs, you may do so here of course. But also by using you favorite of these social media platforms: Facebook, MeWe, Gab, Reddit, Parlor, Twitter, and Instagram. These all link directly to my profile. Again, please feel free to comment and / or share.
Posted by Mark at 6:46 AM