Well we're working in North Carolina and have a 3-day holiday weekend. Do we chill at the RV Park or go exploring the Smoky Mountains and Geocache the remaining six counties to complete the state? It's a roadtrip of course! Grab the hiking boots, hop into the GeoJeep, and let's go sightseeing along the backroads of North Carolina! 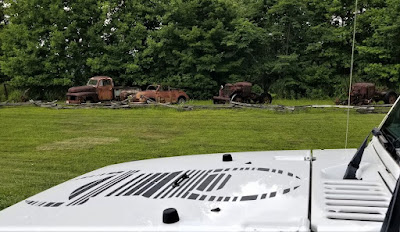 Leaving the Lake Norman Motorcoach Resort behind for a few days, we headed west on NC Highway 18 until we got near Pleasant Grove. There we made a detour over to a bridge on Old North Carolina 18 for a First-to-Find attempt at a geocache published two days earlier (GC8VWYF). Another geocacher tried to find it the same day it was published without any success. I tried searching for nearly 30 minutes. But it wasn't for me to find on this day. I ended up having to log a DNF.
Driving north on US-321, I get off at the Mulberry exit for our next geocache (GC8MRYY). It was located near Silvervale Falls. These cascading falls are about 80 feet from top to bottom. Being this far from the Blue Ridge Parkway, there aren't as many tourists visiting these waterfalls. Only enough parking for 3 cars and we didn't have any problem. But worth the stop if you happen to be nearby. 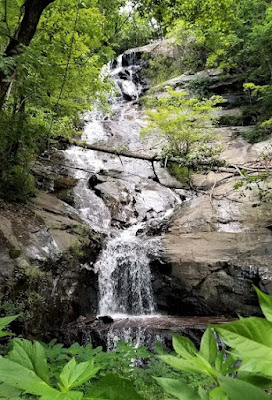 One of the other reasons I like geocaching and traveling the backroads is that you never know what you might come across. Like this old rusty car, truck, and tractors lined up on the side of the road. I just had to stop and get a few photos.

Our next stop WAS to be Blowing Rock and then Grandfather Mountain. I've visited the Smokey Mountains and the Blue Ridge Parkway many times. However I have never made it to these two popular tourist destinations. Today it was going to be another of those times. It was July 4th weekend and the places were packed full and we did not want to contend with the crowds. So we continued on southbound down the Blue Ridge Parkway.
One of the first photo opp stops we took along the parkway was at the Wilson Creek Valley Overlook. A great view and you can see for miles!

Our next stop was a hike for a virtual geocache in the Linville Gorge Wilderness Area. The Linville Gorge Wilderness is part of the Pisgah National Forest. The gorge is formed by the Jonas Ridge on the east and Linville Mountain on the west and is bisected by the Linville River which drops 2,000 feet into the valleys below.
The virtual geocache (GC3A44) was a hike down the Spence Ridge Trailhead. This trail was supposed to take us down to the Linville River where we were to find the "House Rock," a flat top rock formation in the river that looks like a house. I wish I could show a picture of it, but we never made it. After about an hour of hiking, we were slowly getting closer but the destination appeared to be staying off to the right. Finally we decided to turn around and head back to the GeoJeep. As we were hiking back I noticed the correct trail we should have stayed on teeing off. Oh well, maybe next time.

Driving our way around to the other side of the Linville River we headed for our next virtual geocache called "Look At That" (GCG9YT). After 3.5 miles of gravel road, a little rough in a few spots, we made it to our destination at the Wiseman's View Scenic Overlook. Just a short walk from the parking area and you'll arrive at this viewing platform high above the gorge.

Driving back along the 3.5 mile gravel road, which is the Old NC 105 / CR 1238, I spotted this old road marker off the side in the weeds. After a few hours of research, Andrew Milton Kistler (1871-1931) was originally from Pennsylvania and became a prominent businessman in Morganton, Burke County, NC. First established in 1926 as the primary route between Nebo and Linville Falls, a 24 mile road that has since been rerouted and improved. The remaining Old NC 105 is now 17 miles of gravel road which can require 4x4 in some areas. That just added to the adventure in the GeoJeep. 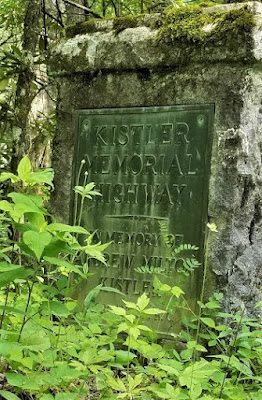 We ended the day in Marion, NC. It was a pretty good day with the sightseeing, the hiking, the off-roading, and a little bit of history. I hope you have enjoyed todays adventure. See you back soon for another day of exploring the Smoky Mountains in Western North Carolina.
To follow along on our travels and keep up with my latest blogs, you may do so here of course. But also by using you favorite of these social media platforms: Facebook, MeWe, Gab, Reddit, Parlor, Twitter, RVillage, GETTR and Instagram. These all link directly to my profile. Again, please feel free to comment and / or share.
Posted by Mark at 10:48 AM