2020-07-04: Day 2 of Our Roadtrip Through the Smoky Mountains and Finding Fugitive Crash Site and Smallest Post Office

Welcome back friends, Jeepers, Geocachers, RVers, and Adventurers. On this Day 2 of our long weekend roadtrip geocaching through the Smoky Mountains, we got to see the beauty of the mountains while discovering some other sites of interest as well. Such as the bus and train crash scene from the movie "The Fugitive" and the smallest post office in the country. But not to get ahead of myself. So climb aboard the GeoJeep and lets go exploring.

Leaving Morganton, I drove back north towards the Blue Ridge Parkway. Our first stop was just a simple LPC (Light Post Cache)(GCV6EB). It made for a quick stop and credit for Mitchell County. Now usually you'll find just a pill bottle with the logsheet inside under these skirts. But this was a first time for me seeing that the entire skirt was used as the geocache container. 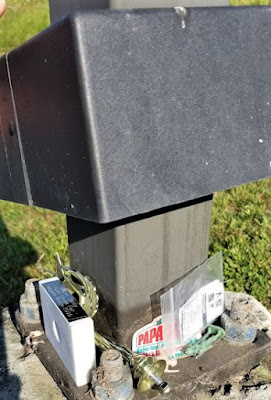 A few miles later over in Yancy County, I made another quick park and grab geocache stop to claim a find in that county (GC18PVC). Continuing on US-19 over into Madison County, we made a stop at the Mars Hill Recreation Park for one more quick geocache (GC5CWVV).
The next one on the list is just another of the many reasons I like Geocaching. In Jackson County, specifically in the town of Dillsboro along the banks of the Tuckasegee River, there's a geocache hidden up above the Fugitive Train Wreck (GC3F9ZA). In the 1993 movie "The Fugitive," starring Harrison Ford and Tommy Lee Jones, included a wreck involving a train and a prison bus.

This wreck was staged near Dillsboro on a rail siding in the GSMR maintenance yard, between the working rail tracks and Haywood Road, the rail cars and bus remain in the same location today. Year round you can get a good view of the Illinois Dept of Corrections transport bus. But as you can see from our photos, the train is a bit hard to see with all the summertime foliage. 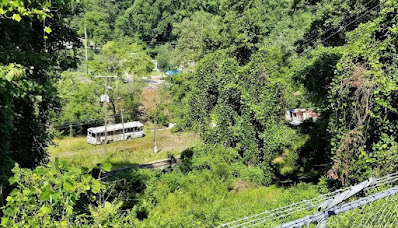 We even drove around to the other side of the river to get a different view, but not much better. The best view of the wreckage would be to take a ride on the Great Smokey Mountain Railroad which runs on the tracks right along side of it.

Driving west on US-64 to Clay County, the most western North Carolina county we needed to complete our map, we target the nearest geocache "The Legend of the Fairy Cross" (GC3GX90). This section of US-64 runs alongside Buck Creek. We exit the highway closer to the geocache onto the parallel National Forest Road, which looks like it might have been the Old US-64. 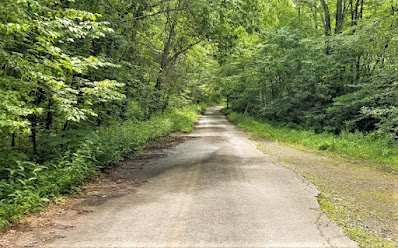 There was a small pull-off area to get to Buck Creek, so I decided to stop for a moment for some photos. I like these old roads enclosed by bushes and trees. After a few minutes of enjoying the sounds of the creek and taking some photos, we drove up a little further and turned onto Buck Creek Road. 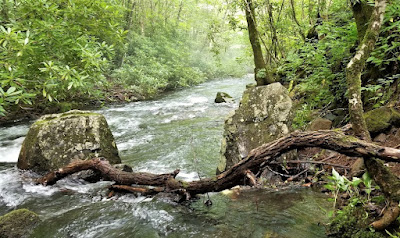 For all my geocaching friends I thought I'd post a rare photo of my GeoJeep. Usually I'll post just the hood logo in front of something or have the tracking code blurred out like in the pic above. I'm only gonna leave this here a week, maybe longer, so log your "Discovered It" soon. I don't normally allow virtual discoveries so please don't copy this photo to your social media sites. And please include the location of where I'm parked in your discovered log. Thanks.
Now back to the geocache. According to the description on the cache page: "this general area has a great history of minerals and mining. We are aware of at least 4 abandoned mines nearby. One of the minerals unique to the area is staurolite crystals, also known as fairy crosses because of their unique shape.
"Two thousand years ago, so the Cherokee legend of Fairy Crosses begins, the "Yunwi Tsunsdi," or Little People, lived in the beautiful mountains of what is now North Georgia and Western North Carolina. Shy and elusive creatures, the Little People were revered throughout the Cherokee Nation for their ability to find people lost in the thickly forested mountains of the region.
"One evening, while the Little People were enjoying an enchanted celebration of dance, music and song, a foreign messenger arrived bearing the sad news of the Crucifixion of the Son of the Great Creator. So moved were the Little People upon hearing the news of the loss of one so great, that they were moved to tears. As their tears fell to the ground, they turned into Fairy Crosses, where they can be found to this day."
Well I don't know anything about the little people or fairy crosses, but I did find the geocache down by the creek. I looked along the banks a few minutes for some minerals or cool rocks, but I didn't see anything special. Didn't want to spend too much time there though.

Finally rounding the corner and headed back to the east towards the campground, we followed US-64 into Highlands and Cashiers. Once in Highlands, I started taking the rural backroads to my next stop. It was there we found the Smallest U.S. Post Office in the country, at just 6 feet by 6.5 feet.
Originally built in 1878 about a mile away on Whiteside Road next to a grist mill at Sliding Rock, our next stop below. It remained there for 69 years and its first postmasters were Thomas and Elizabeth Grimshawe. In 1911 the Grimshawes sold their property to Warren and Lena Alexander who acted as the postmasters for 36 years. In 1947 they sold their property and the post office was moved near its current location once owned by the Alexander's daughter. Mae Alexander Passmore was postmaster for the final 6 years until President Dwight Eisenhower closed all third class post offices in 1953. 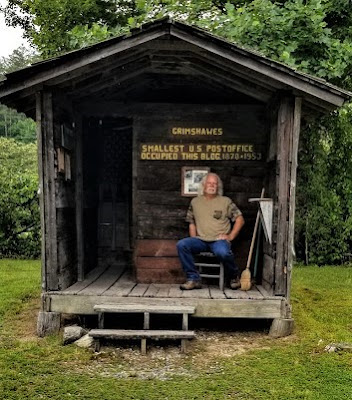 It was then moved and used as a ticket office and post card stand until returning here in 1976. Falling into disrepair and still getting the occasional tourist visitor, in 1999 neighbors decided to restore the post office and move it off the road a little bit and provide safe parking. From the photos displayed inside, the front area where I'm sitting was the customer area and the back half for mail and storage. Currently hanging on the back wall is the last flag which flew over the post office from the 1950's. 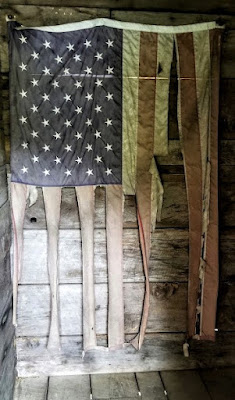 Driving a mile up the road we get to Sliding Rock. Actually a waterfall flowing over a large smooth rock, it turns a creek into a natural waterpark. A popular place in the summer time to cool off as you can see. There was a geocache on the short trail leading from the parking area to the rock but I couldn't find it. (The cache has since been archived as many others could not find it as well.) 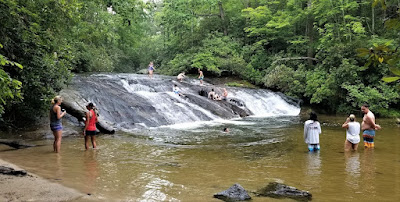 And finally, one last quick roadside geocache (GC3C0B0) in Transylvania County to complete my final 100 North Carolina counties Geocaching map!
That was it for Day #2 of our long holiday weekend. On Day #3, Candy wasn't feeling well and we drove nonstop back to the campground at Lake Norman. I hope you have enjoyed this roadtrip through the Smoky Mountains. And perhaps found something I've written about to add to your bucket list of places to visit. See you back real soon.
To follow along on our travels and keep up with my latest blogs, you may do so here of course. But also by using you favorite of these social media platforms: Facebook, MeWe, Gab, Reddit, Parlor, Twitter, RVillage, GETTR and Instagram. These all link directly to my profile. Again, please feel free to comment and / or share.
Posted by Mark at 4:38 AM