2020-08-30: Touring the Biltmore Mansion Estate, the Largest Home in the United States

GROUP ROADTRIP!! Working in central North Carolina near the town of Maiden, I talked a few of my co-workers into taking a group roadtrip over to Asheville and tour the Biltmore House. Completed in 1895 with 178,926 square feet, it is the largest house in the United States and second largest in the world. Today was that day when the bunch of us walked the halls and rooms of this awe-inspiring house. So join us as we take a step back in time, share some history and photos. 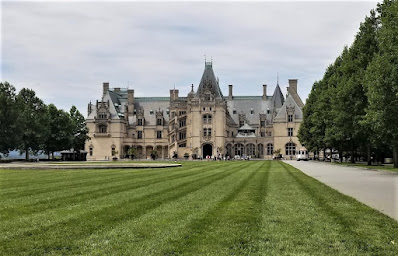 George Washington Vanderbilt II (1862-1914), the grandson of railroad tycoon Cornelius "Commodore" Vanderbilt (1794-1877), fell in love with Asheville in 1888 while visiting the area with his mother Maria Louisa Kissam Vanderbilt. His older siblings had already built summer homes around New England. He decided he was going to build his "little mountain escape" in North Carolina and began purchasing land in 1889. Vanderbilt bought almost 700 parcels of land accumulating over 125,000 acres.
The massive construction project on the main house alone utilized over 1000 laborers and stonemasons. A 3 mile railroad spur was built to bring materials to the site. Also to aid in such a large undertaking, a woodworking factory and brick kiln were constructed onsite. The kiln produced 32,000 bricks a day.
The Biltmore Mansion has four acres of floor space and 250 rooms in the house, including 35 bedrooms for family and guests, 43 bathrooms, 65 fireplaces, 3 kitchens and 19th-century novelties such as an electric Otis elevator, forced-air heating, centrally controlled clocks, fire alarms, and a call bell system.
To the right of the marbled Entrance Hall, the octagonal sunken Winter Garden is surrounded by stone archways with a ceiling of architecturally sculptured wood and multifaceted glass. The centerpiece is a marble and bronze fountain sculpture titled Boy Stealing Geese, created by Karl Bitter.

The Banquet Hall is the largest room in the house, measuring 42 ft × 72 ft (13 m × 22 m), with a 70 ft-high (21 m) barrel-vaulted ceiling. The table could seat 64 guests and is surrounded by rare Flemish tapestries and a triple fireplace that spans one end of the hall. On the opposite end of the hall is an organ gallery that houses a 1916 Skinner pipe organ. 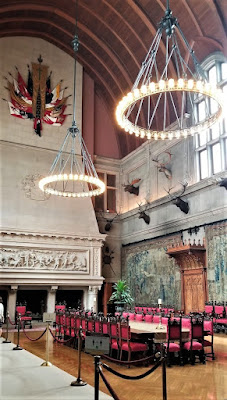 The two-story Library contains over 10,000 volumes in eight languages, reflecting George Vanderbilt's broad interests in classic literature as well as works on art, history, architecture, and gardening. The second-floor balcony is accessed by an ornate walnut spiral staircase. The Baroque detailing of the room is enhanced by the rich walnut paneling and the ceiling painting, The Chariot of Aurora, brought to Biltmore by Vanderbilt from the Palazzo Pisani Moretta in Venice, Italy.

The second floor is accessed by the cantilevered Grand Staircase of 107 steps spiraling around a four-story, wrought-iron chandelier holding 72 light bulbs. The second-floor Living Hall is an extension of the grand staircase as a formal hall and portrait gallery. Several large-scale masterpieces are displayed in the hall. 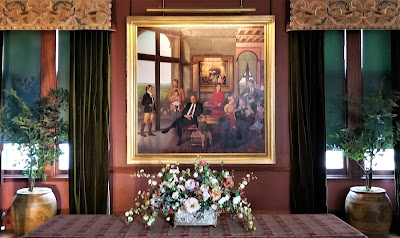 Located nearby in the south tower is George Vanderbilt's gilded bedroom with furniture designed by Hunt.

His bedroom connects to his wife's Louis XV-style, oval-shaped bedroom in the north tower through a Jacobean carved oak paneled sitting room with an intricate ceiling. 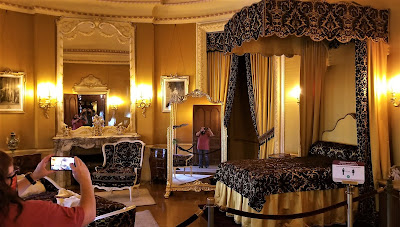 Fully electric and centrally heated, Biltmore House, at the time of its completion, was considered one of the most technologically advanced structures ever built and is still admired today for its innovative engineering. It used some of Thomas Edison's first light bulbs, boasted a fire alarm system, an electrical call box system for servants, two elevators, elaborate indoor plumbing for all 34 bedrooms and a relatively newfangled invention called the telephone. 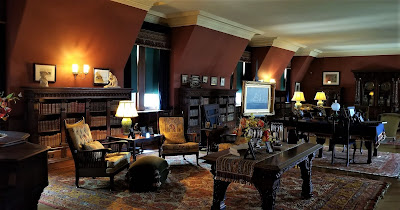 The basement level featured activity rooms, including a large muraled room often used for kids as a haunted house during Halloween,...

and a gymnasium with once state-of-the-art fitness equipment.

The service hub of the house is also found in the largest basement in the U.S. It holds the main kitchen, pastry kitchen, rotisserie kitchen, walk-in refrigerators that provided an early form of mechanical refrigeration, the servants' dining hall, laundry rooms, and additional bedrooms for staff.

One of the two ornate elevators located within the mansion.

Following George’s early death at age 51 in 1914, his wife, Edith, sold a large portion of the original landholding to the government — 87,000 acres — to preserve in a natural forestry state, following his intentions for the acreage.

Over the next few years, selected properties were sold from the estate, including the Biltmore Village. Today the Biltmore Estate encompasses about 8,000 acres.

Biltmore's unique horticultural environment creates a blooming season that begins in early spring and continues until the first frost: in other words, something is blooming at Biltmore from March through November. Even during winter months, the conservatory is full of colorful tropical plants such as poinsettias, orchids, lilies, cacti and bougainvillea.

After more than two hours of touring the Biltmore Mansion and Gardens, we all drove over to the Biltmore Village. I think the biggest interest there was the winery. The ladies spent much of the time there. Candy purchased a Biltmore wine glass for her two bottles of Biltmore wine.
Before heading home, we stopped at a Greek/Italian restaurant for a late lunch / early dinner. From there it was a drive back to the Lake Norman RV Resort. A great adventure was had today and this time with a group of friends. Until next time...
To follow along on our travels and keep up with my latest blogs, you may do so here of course. But also by using you favorite of these social media platforms: Facebook, MeWe, Gab, Reddit, Parlor, Twitter, RVillage, GETTR and Instagram. These all link directly to my profile. Again, please feel free to comment and / or share.
Posted by Mark at 6:37 AM