So Friday night we drove over from West Texas into the Killeen/Ft Hood area to look at some houses to rent. That is how we spent yesterday. Today we made the drive back to Monahans, stopping a few times along the way to grab some Geocaches.

Our first cache was a quick one right at the hotel and then another in the Walmart parking lot. Then we drove over along side the airport to find the Brown (Okay Community) Cemetery cache (GC4QKZ8).

Elisha Ivy, for whom Ivy Mountain Road was named, established a home and store in this vicinity in the 1860s. In the 1870s, a community known as Liberty Hill developed northwest of his property. In 1896, when the rural settlement applied for a post office, its name was changed to Okay. Area residents supported churches, a school and businesses, and Samuel Marion and Mary Elizabeth (Evans) Brown set aside land for a community burial ground, formally deeding it in 1907.
As military installations in the area grew, the community of Okay was displaced and ceased to exist in the early 1940s. In 1953, the U.S. Government decided to extend the runway at Gray Air Force Base, where the Brown (Okay Community) Cemetery was located, approximately 1,600 feet southwest of this site. The Army Corps of Engineers moved 70 graves, 30 of which were for unidentified individuals, to this location and aligned the burials similarly to original positions. The earliest marked grave dates to 1882 and is that of infant David Davis. Today, the cemetery is a reminder of the Okay community and the families who lived there, added to the long list of ghost towns. 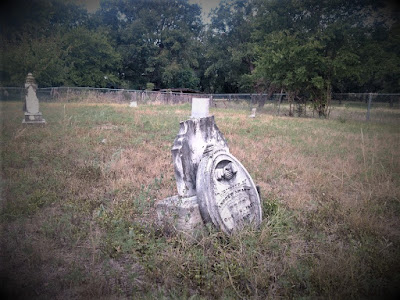 Our next stop was for another Brown Cemetery geocache (GC3D2BY) just outside of San Saba, TX. After living for a time in Arkansas, John H. "Shorty" Brown (1817-1896), his wife Jane Ann, and some of their children came here. Brown helped found San Saba in 1854 and became a civic leader. Although San Saba County provided a graveyard, Brown and his wife deeded this plot of land near their home for a family burial ground. Jane Ann, who bore 17 of Browns 21 children, was probably the first burial here about 1874. Brown's son and son-in-law who were murdered are buried here along with other family members and friends.

Next to the cemetery is a community park that has a train trestle railroad track passing over the entrance that made for a nice photo. I just wish I could have removed those signs first and then taken the picture. 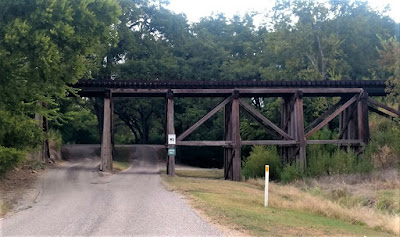 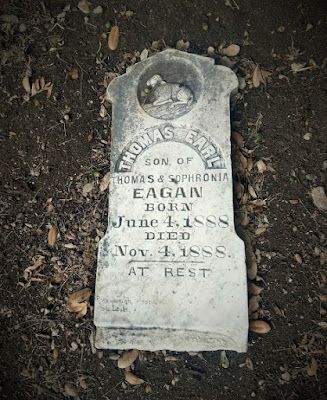 Our next and last geocache of the day was located in a town called Eden, TX. The Pioneers Rest Cemetery (GCM02B) was set aside in 1882 when the town of Eden was platted by Fred Ede. Though older burials may be present, the earliest tombstone is that of the five-week old infant son of Frederick and Susan (Reynolds) Shutt, buried in 1882. Several graves for children and infants bear witness to the harsh conditions of pioneer life.Adults, too, faced difficult time. John Emmett Molloy and Charles Edward Waring both were killed in accidents with horses. According to oral history, a woman named Carson was killed by a runaway horse in 1887 and is buried in an unmarked grave of an estimated 33 or 34 burials believed to have taken place here, only fifteen tombstones remained standing at the dawn of the 21st century, but Pioneers Rest Cemetery continues to be a chronicle of Eden's history. Unfortunately when it comes to the cache, this one was a DNF as it was missing.


Not as big a geocaching adventure as usual, but this wasn't a caching trip. More of taking care of some business with some caching tossed in to break up the long drive. Thanks for stopping by to read our blog. See you out at the next cache...
Posted by Mark at 7:52 AM