Hello again and welcome back. So we spent the last two days moving into the house in Killeen. Now it's time for some fun and exploring. Today's Geocaching adventure has us driving around east central Texas to pick up some new counties. 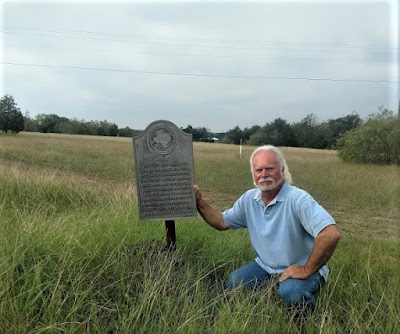 Our first stop was down in Bastrop County and a town called McDade. There we grabbed a virtual cache (GCFF19) and a cemetery cache (GC41K67). McDade was founded in 1869 in the expectation of the arrival of the Houston and Texas Central Railroad. The town was named after James W. McDade who may have had something to do with the railroad. In the early days it was also called Tie Town or Tie City because ties and logs for the railroad were stored there.

When you think of the wild west and gunfights, you usually think about Tombstone and Deadwood. But this little known town of McDade, Texas experienced more shootings, lynchings, stabbings and assassinations between 1875 and 1884 than Tombstone and Deadwood combined! They need to make a movie about the outlaws and vigilantes there. But I encourage you to read more about the town at Texas Escapes. 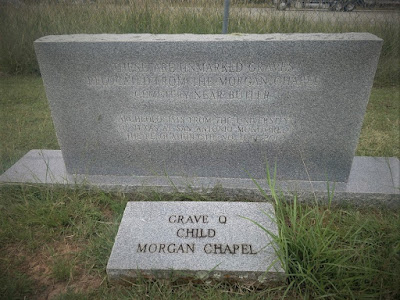 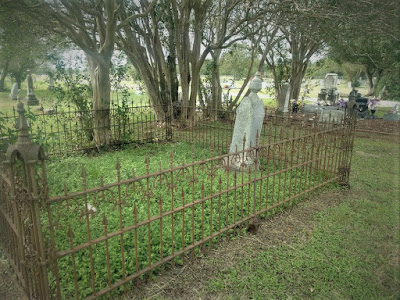 One more quick roadside cache in McDade (GC6K3KY) then we continue down US-290 towards Washington County. There we stop for a quick Cowboy Wine cache (GC2QX0G) at a winery, but no time for tasting. Gotta keep moving. Then another picnic area cache along Mill Creek (GCNNDN). 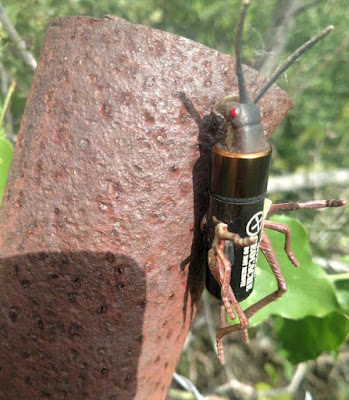 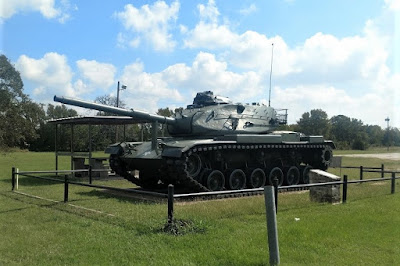 Now over in Grimes County in the town of Navasota we find our next 5 geocaches. The first was called Real American Hero (GC23PZ6). March 23, 1999 the United States Department of the Army delivered a model M-60ATTS tank serial number 3757-A to this site. The M-60 combat tank equipped with a 105 mm cannon was deployed in the Vietnam and Desert Storm wars. This tank is dedicated to all members of the VFW Post 4006. The marker is dedicated in memory of Chief Bos n' Mate Sam Corolla Ret. USN who was instrumental in acquiring this tank. 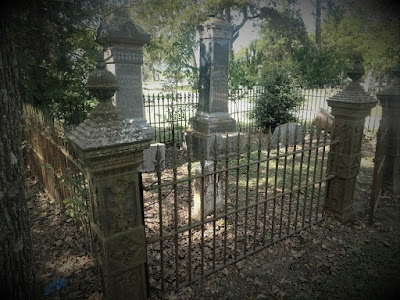 Also in Navasota is the Oakland Cemetery and our next three geocaches (GC23PZY, GC23PZK, GC6KY3J). One of the celebrity burials is that of a musician, Mance Lipscomb Sr (1895-1976). His father taught him the basics of fiddling and was self-taught the guitar. Developed a distinctive finger-picking style that complemented his singing style. Lipscomb was "discovered" in 1960 at age 65. He saw his first album, and first recording, Texas Songster, released a year later. His music and life have been well documented on film, appearing in several 1960s and 1970s blues documentaries including The Blues Accordin' to Lightnin' Hopkins (1968), Blues Like Showers of Rain (1970), A Well Spent Life (1971), and Out of the Black Into the Blues (1972).

Our last geocache in town was a quick park and grab hidden at and placed by the Navasota Police Department (GC77NVV). Before heading out of town, we had to make one more stop. There wasn't a cache there. But when the town is home to the world's largest teapot you just have to pay a visit. Located next to Martha's Bloomers, a plant and garden nursery, it's a free stop for a photo opp. 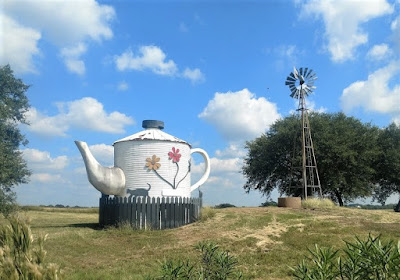 Continuing north on TX-6, we arrive in Brazos County and the town of College Station. We had a quick stop at an A-maze-ing virtual cache (GCDB0A). What's the difference between a maze and a labyrinth? A maze is a complex branching (multicursal) puzzle that includes choices of path and direction, may have multiple entrances and exits, and dead ends. A labyrinth is unicursal i.e. has only a single, non-branching path, which leads to the center then back out the same way, with only one entry/exit point. So is this a maze or a labyrinth? Neither, it's a virtual cache! 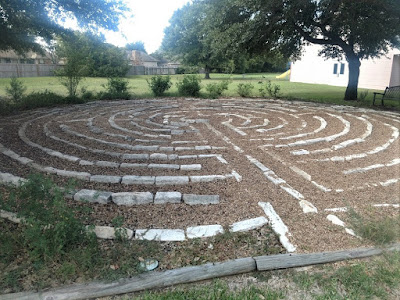 Not too far away was a gadget cache (GC5CRV6). Gadget caches are a lot of fun, but can also be frustrating. They're usually easy to find, as this one was. But there's always a brain teasing challenge to figure out how to get them open! Fortunately I have encountered one of these before so it was fairly easy. 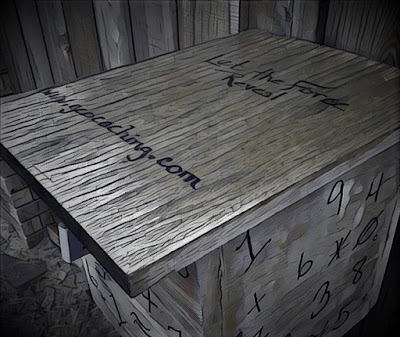 Our next Geocache was over in Burleson County at a historical marker for Fort Tenoxtitlan (GC1J60X). Founded by Mexico as a bulwark against Anglo-American immigration, this fort and its nearby city were twice proposed for the capital of Texas. Alarmed by the influx of Anglo settlers into Texas, Mexico in 1830 sought to erect a line of forts to keep out the intruders. The ancient Aztec name for Mexico City (originally pronounced "Ten-ox-teet-lan") was given this site; it means "prickly pear place". So hopeful of the fort's success was the military commandant of the region that he envisioned it as the capital of Texas. But Anglo immigration did not cease. Instead it thrived on the friendship of the local soldiers and incoming pioneers. The colonizer Sterling C. Robertson introduced scores of settlers.

In 1832 the soldiers were withdrawn and the fort finally defaulted to the Anglos. Subsequently it was a supply center and mustering point for expeditions against the Indians. During its brief life many Texas patriots lived here, including 5 signers of the Texas Declaration of Independence, a martyr of the Alamo siege, and 7 soldiers of the Battle of San Jacinto. Tenoxtitlan was again suggested for the capital of Texas during the Republic, but Austin won out. In 1841, after many Indian raids, the site was abandoned.

Unfortunately, there's nothing left of the fort to see.

We finished off the day with one last cemetery cache but unfortunately it had been muggled and we had to log a DNF. It was a fun day with lots to see. But time to get back to the new house and relax.