Welcome back and WOW what a day! Today we have everything from a crumbling school, to a cemetery, an old bridge, going way back to the days of dinosaurs, and finishing the day with decadent CHOCOLATE! So lets get started... 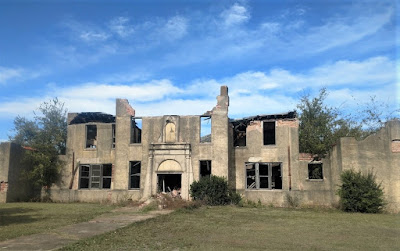 After finishing up work yesterday in West Texas, we made the long drive to Killeen last night. Today was a day for geocaching and exploring. After breakfast, we made our way up to Bosque County for our first cache and a new county. The Mosheim School (GC15B39) is a crumbling landmark of an era faded into the past. The town formerly known as Live Oak was settled in the 1850s with Jonathan Dansby given as an early (if not the first) settler.

The school was built in 1923 and by 1970 it had closed it's doors. Looking at various photos of the school online, the taller section above the entry along with the roof had collapsed sometime between 2013 and 2016. There's a really good article at the KWTX website talking to two locals who grew up and went to that school. 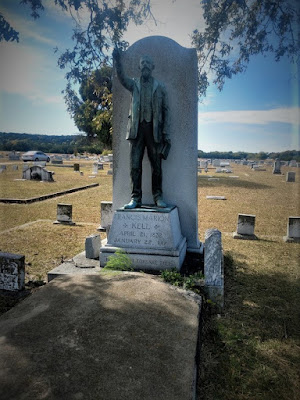 Just up the road is the town of Clifton, where we found our next two caches at the cemetery (GC6RW7N, GCT7BK). Clifton was founded in the winter of 1852–53, when the families of Samuel Locker, Monroe Locker, Frank Kell (whose grave and statue in the photo), and T. A. McSpadden settled in the vicinity. The town was named Cliff Town after the limestone cliffs that surround it. Over the years the name was altered to Clifton. The site was originally on the banks of Clear Branch. The Masonic hall and a log schoolhouse were the first public buildings. The post office was established in 1859. The First Presbyterian Church of Clifton was organized in 1861 and is the oldest church in continuous service in the county. The Baptists built the first church building in Clifton in 1884–85. After the Civil War J. Stinnett built a flour mill that was powered by the Bosque River. It was replaced in 1868 by a limestone mill, which was eventually converted to the electric power plant that provided the first electricity for Clifton homes. A three-story school known as Rock School was built around 1870 and served the community for more than twenty years. In 1893 a new building was constructed on property donated to the Clifton school system.

In 1880 the Gulf, Colorado and Santa Fe Railway built a station a mile south of Clifton. Merchants moved their businesses closer to the railroad station, and the town thrived as a business and trade center. The Merchant Exchange and Flour Mill, the first steam flour mill in the Bosque valley, was established in 1887 or 1888. The Clifton Record, a newspaper that began publishing in 1895 under the ownership of W. C. O'Brian, continued to serve the community through the years. Clifton also served as the county seat between 1890 and 1892. Clifton Lutheran College, later known as Clifton College, opened in 1896. The community was incorporated in 1901. An earlier attempt at incorporation in 1891 failed when the election results were declared invalid. A fire on December 23, 1906, destroyed a large portion of the business district, which was eventually rebuilt. The Clifton Volunteer Fire Department was organized in 1907. The town's need for a hospital was met by Dr. V. D. Goodall and Dr. S. L. Witcher in 1938. The Lutheran Sunset Home for the elderly was established in Clifton in 1954. The town had an estimated population of 204 in 1904 and 3,195 in 1990. It had 100 businesses in the 1980s. In the early 1990s an exotic-animal preserve open to tourists was located southwest of Clifton on Farm Road 3220. In 2000 the population was 3,542 with 262 businesses.

After leaving the cemetery, we headed to the north side of town to visit a piece of history before it becomes history. The Clifton Whipple Truss Bridge (GC6RW6C) was built in 1884. Still in use as one of only two bridges crossing the North Bosque River east of town. It had asphalt over the original wooden planks. But it's days are numbered. You can kinda see in the photograph, they're building a new modern bridge right next to it. And the word is when the new one is completed that the planks will be removed making it impassable. That's a shame. I like these old bridges. They should at least leave it for pedestrians, fishing, or just because. 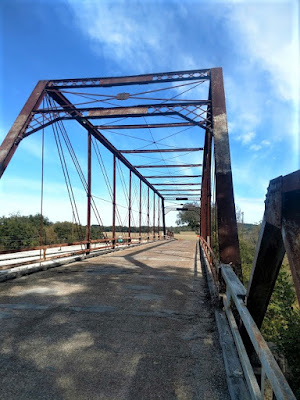 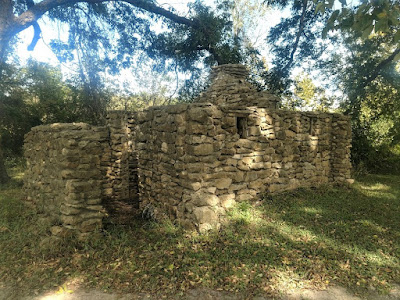 Around the corner from the bridge was this rock structure. Wasn't sure what it was as there were no signs or anything. Perhaps a part of the old mill? So I began to Google for answers. Not even close to being an old mill. The City of Clifton offered the State of Texas 80 acres of land along the Bosque River for a state park. The state never accepted the donation, and the area remained a city park. Civilian Conservation Corps (CCC) Company 878 arrived in June 1933 to begin work on the park. The CCC built picnic and fireplace units, a semicircular seating area, entry portals, concession building and latrine all out of limestone. The CCC left their camp in Clifton in January 1934. This is what remains of the abandoned latrine! 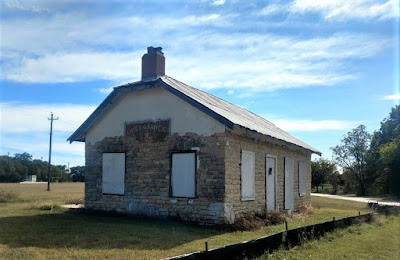 Then there's this building on the corner. The sign says "First Chance," but I couldn't find any information on it. Then Bryan Davis from the BackRoads of Texas FB Group was able to help me out. He sent me this information: "My late friend Anna (Wood) Compton knew a lot of local history. Not sure many will recognize this photo from 80 years ago. This was a popular stopping point just before crossing the Bosque River on the west side of Clifton, where the old Whipple Truss Bridge stood. Anna lived here with her parents in the 1930s and her dad sold bait and tackle, picnic supplies, barbeque, cigarettes, and other goods. The Wood family lived in a back room partitioned with a sheet from public view. What fascinated Anna and me was that nothing appeared being done to preserve the limestone structure which was her childhood home. I've been told it is the oldest structure in present-day Clifton, pre-dating the move of Clifton to its present location with the arrival of the railroad about 1881. I recall Dan Orbeck and Ferman Grimm saying their families also owned the structure at various times. I'm sure there are issues with it being in a flooding zone, but I hope some measures are being taken to insure this landmark, which has survived some 150 years and numerous floods, receives proper preservation."

Thank you Bryan. I never thought the building would have been that old! Here's a picture Bryan sent me from back in the past: 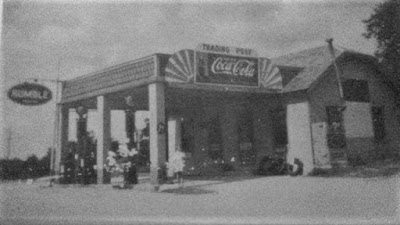 From there we drove north on up into Somervell County and a town called Glen Rose. The town had a couple of statues around the courthouse square. 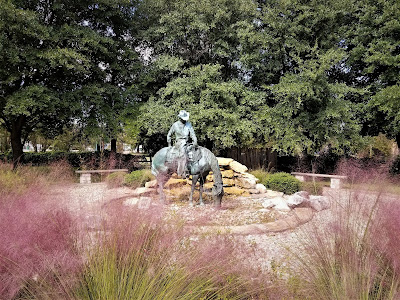 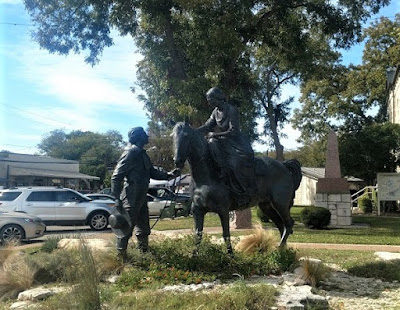 Also in the town square, is the tiny Hopewell Post Office and our last cache for the day (GC9B44). There are (or were) Hopewells in Franklin, Houston, Red River, Smith, Upshur and Williamson Counties. Somervell’s Hopewell is now covered by Squaw Creek Lake. Fortunately, great effort was taken to preserve a part of the forgotten community by moving its tiny post office to Glen Rose to sit on the courthouse square next to the museum. It's short history lasted from 1901 through 1904. 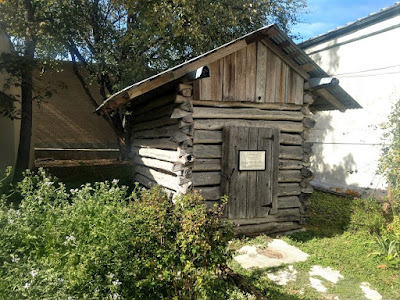 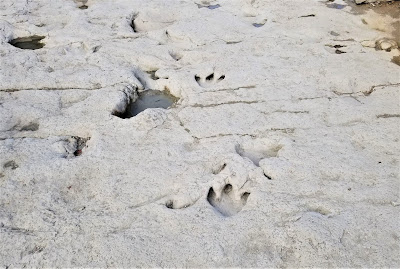 From there we drove over to the Dinosaur Valley State Park. In 1908, a flood of epic proportions roared down the Paluxy. It washed out all bridges and culverts on the river and scoured the riverbed. A year later, nine-year-old George Adams discovered something amazing in the river:  large, three-toed tracks - theropod tracks. Nearly 20 years later, a fossil collector for the American Museum of Natural History in New York named R. T. Bird saw one of the theropod tracks in a shop in New Mexico. He decided to come to Texas and check out the site. While exploring in the river, he was amazed to discover what looked like sauropod tracks, along with the theropod tracks. The tracks were the first proof that sauropods walked on land. The park opened in 1972 to preserve these valuable dinosaur track sites and to allow people to learn from and enjoy them. They also have some nice hiking trails along the river. 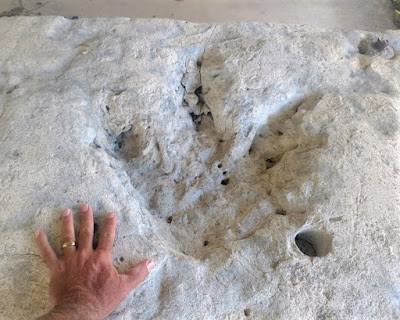 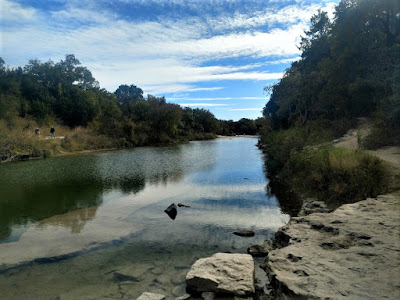 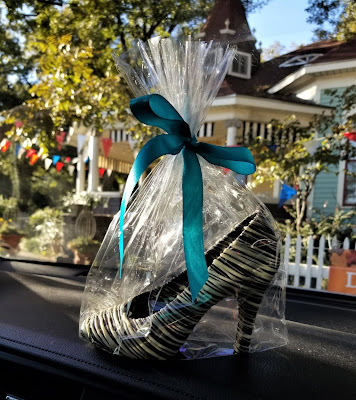 Getting late in the afternoon, and both starving by this point, we stopped in the town of Hico for dinner at the Jersey Lily's Mexican Restaurant. It was pretty good. The town is also known for this legend that supposedly Billy the Kid really wasn't shot and killed in his young life. But lived out a long life under an alias here in Hico. But what we REALLY liked best about this whole town was a visit to Wiseman House Chocolates! While at the restaurant I was looking up other things and town and saw this place. We just had to go visit after dinner. And it was a good thing we did!

They had this pure hot chocolate that was the best hot chocolate we've ever tasted. Something about taking pure melted chocolate, adding a tiny bit of water to keep it from hardening, and sipping it from a shot glass. So rich and delicious that's all you really need. The best chocolate I've ever had. We ended walking out with over $100 worth of several different types of chocolate, including this pure chocolate high healed shoe for Candy! I think it'll just be displayed in our kitchen forever. I can't see eating this shoe. Does chocolate go bad? Guess we'll never know. 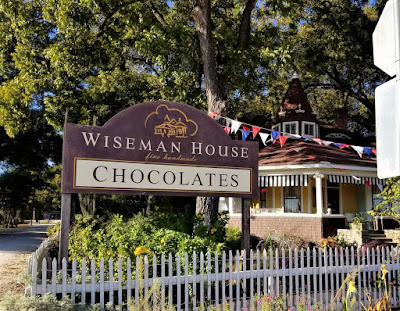 Well that's the end of a wonderful day! I thank you for reading and following along in our adventures! Until next time...
Posted by Mark at 8:26 PM