Thank you for returning to our AwayWeGo's Geocaching Adventures Blog. My name is Mark and I'm the blogging half of the awayWEgo. Today wasn't a busy caching day. I'm still working as a construction surveyor on a commercial solar power plant in West Texas. But now with a home also in Killeen, about 5-6 hours away, where the better half of the awayWEgo will soon be working. This means a long commute on the weekends.

On today's long 360+ mile drive back to West Texas, we made a few stops to geocache and break up the long drive. This also gives us a chance to see some historical sights and learn about Texas.

Our first geocache was in a town called Brady at the cemetery (GC2H37Q). Live Oak Cemetery in Brady, TX has over 4200 permanent residents dating back to the 1800's. Two graves that caught my attention were these brick covered plots. The one having the opened top makes me wonder if they've escaped and now wandering the surface with the walking dead. 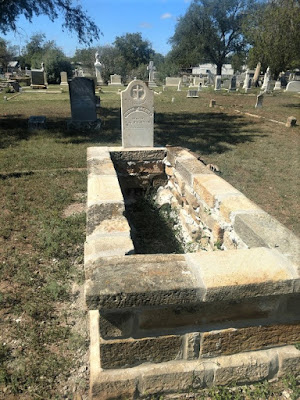 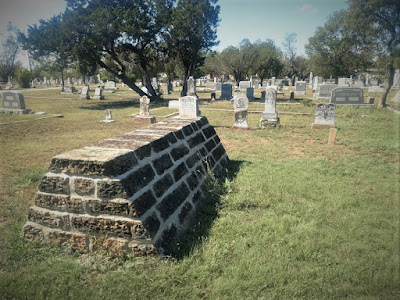 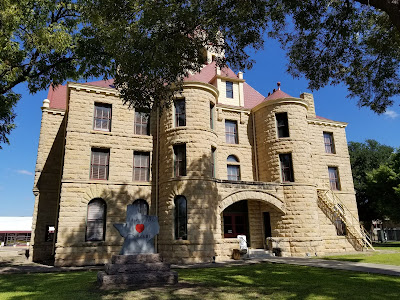 McCulloch County was organized in 1876 with Brady as county seat. The first courthouse was built in 1879. This second and current courthouse was completed in 1900 on the same site. Modified Roman architecture employing arch vault, Victorian copula, pine woodwork, flooring, and native sandstone from local quarries.

The town of Brady is often called "The Heart of Texas" because of it's almost near geographical center of the state. There is a historical marker north of town referencing the geographic center. However, the actual geographical center is a few miles from it and located on private property.

Also in town square and to the side of the courthouse is our next cache called KA-BOOM (GC2HF3A). It took some searching and Candy actually spotted it first with her keen eyes. Hidden on a United States Army 155mm Howitzer model M114A1, upgraded to A2 Type, and built in 1944. Dedicated on Veterans Day November 11, 1995 to honor all McCulloch County Veterans. 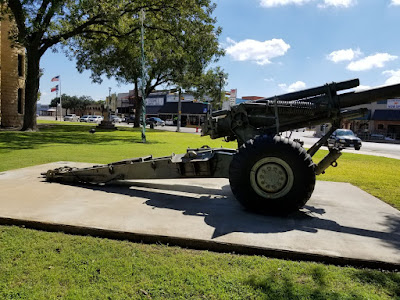 Continuing westbound a few miles, we arrived at our first ghost town and our next geocache (GC15638). West Sweden was settled in 1905 when a flock of Swedish immigrants transmigrated from their farms in Travis and Williamson County, led by their pastor Ernest Severin. The town's name carried on a tradition (after New Sweden in Travis County and nearby East Sweden, Texas) but the town never prospered and it is believed the residents returned to their previous homes. The community remained on highway maps in 1948 but by the 1980's it was just a memory. All that remains is the cemetery. 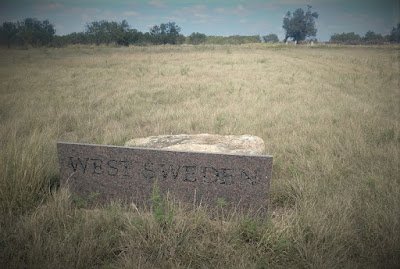 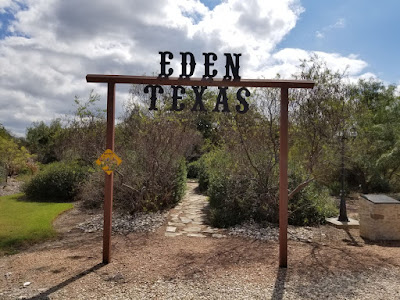 And finally, we make a stop in the Garden of Eden (GC4FKW0). The town was not named after the biblical garden but after one Frederick Ede (the 'n' was added later), a settler who moved to Concho County in the early 1880s. In fact it was Ede who donated land for the townsite and town square. He was thus honored when the town was granted a post office in 1883.

Near the center of town you'll find the Garden of Eden. A community garden full of native flowers and trees. It was a nice little stroll and we found the cache hidden among the rocks. 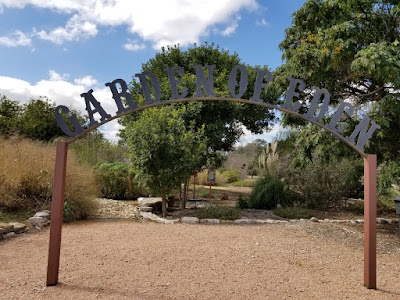