Hey everybody! So after being off work for nearly two months, they've called me back to the wind farm down in the Rio Grand Valley in South Texas. I've enjoyed the time off out geocaching as you may have guessed from my previous blog posts. But after a couple of geocaching roadtrips, it's time to go back to work.
Being back for a week, today we got some rain which made it a little too wet and muddy to work. So we got off a bit early. But it's never to wet for geocaching. I decided to take a short roadtrip from the westside of the RGV to the eastside.
I arrived on South Padre Island, Texas and to my first virtual geocache (GCB15D). "Sailed Through This Pass" is a monument dedicated to the brave fishermen who have used this port and ventured into the Gulf of Mexico. 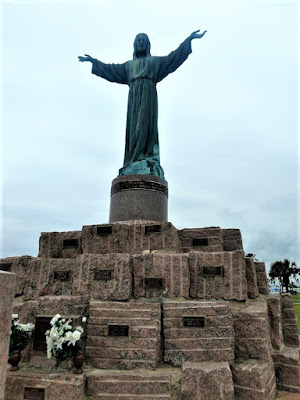 Now backtracking westbound, the next two virtual geocaches are near the Welcome to South Padre sign at the bridge to the island. Well actually one of them IS the welcome sign (GC7B7K1). And the other is nearby for a reminder of when an 80 feet section of the Queen Isabella Memorial Causeway bridge collapsed after a barge accidently hit one of the pillars in 2001. The virtual geocache (GC8753) recognizes the memorial for the eight motorists who lost their lives as well as a monument for the survivor.
There's also a statue of the islands namesake. Padre Jose Nicolas Balli's (1771-1829) family immigrated from Spain in 1569 and became large landowners in the lower Rio Grande Valley. In 1800 Balli applied to King Charles IV of Spain for 11 1/2 leagues of land on the island, and in 1804 started its first settlement, Rancho Santa Cruz. Padre Balli served as collector of finances for all the churches in the Rio Grande Valley. He also founded the first mission in present Cameron County. His ministry was a great influence on the lives of early South Texas settlers. 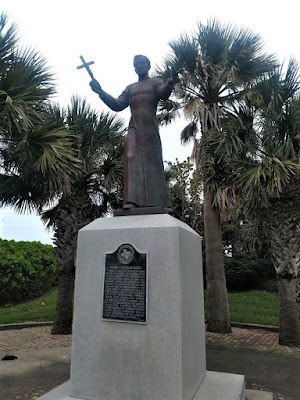 Back on the mainland side of the bridge is the "Beacon of the Night" (GC83C9) virtual cache. The Point Isabel Lighthouse was built of brick in 1852 and brought from New Orleans by schooner. The beacon's 16 mile range guided ships into the harbor and to the Rio Grande. It is one of the oldest lighthouses on the Texas Gulf Coast. It also played a significant part in military operations around the mouth of the Rio Grande for over a century, with some interruptions, has served the region as an aid to seamen. 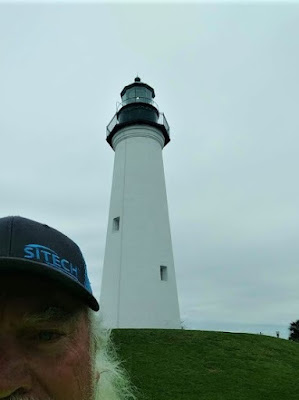 The next virtual geocache called "Catch and Release" (GCAEC0) was located at the Pirates Landing Restaurant. Supposedly there was a world record sheepshead fish caught there on the pier. Looks like a big fish. Is it true? Can't tell you that as I haven't found any verification of such record. But what I did find was the World Record Largest Fly Fishing Rod. 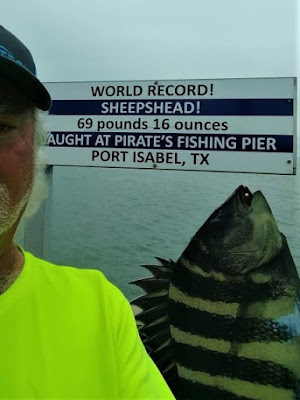 And finally the last one I had time for was the Palo Alto Battlefield National Historical Park (GCC88D). This prairie of sharp cordgrass, dense mesquite, cactus and other thorny plants was the location of the first battle of the Mexican War. United States troops led by General Zachery Taylor, whom later becomes the 12th U.S. President, went up against and defeated Mexican troops led by General Mariano Arista. 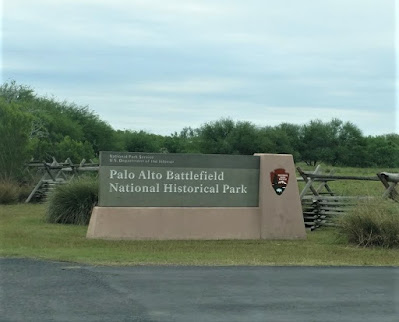 Well that's it for this quick trip across the Rio Grande Valley. Time to grab a quick bite to eat and drive the couple of hours back to Falcon Lake on the westside. I hope to see you back again soon for another installment of the AwayWeGo's Geocaching Adventures.
Posted by Mark at 7:12 AM