Discovering the Ghost Town of Oakville Texas and Researching Its History

Hello Friends, Travelers, and Geocachers. Welcome to another day in our AwayWeGo's Geocaching Adventures. Today I want to invite you along this roadtrip as I stop to explore a South Texas ghost town called Oakville.
It started out as my usual 360+ mile Sunday drive from Killeen, Texas down to Roma in the Rio Grande Valley. I was driving down I-37 and exited off the highway to get two geocaches in the Oakville Cemetery (GC2KPBH, GC78PKP) on the west side of the Interstate. From the historical marker at the Oakville Cemetery: "Donated in 1857 by Thomas Wilson, who also gave land for Main Town Square. The property was originally part of the 1831 McMullen McGloin land grant from Mexico. Among graves are those of J.T. James, the founder of Oakville; early pioneers; and organizers of Live Oak County."
As I was driving up the onramp heading south, I noticed out the corner of my eye across the east side of the highway all the old buildings of the town. That really sparked my interest so I continued driving down the Interstate six miles to the next exit. Then got off and made a u-turn another six miles back to Oakville. 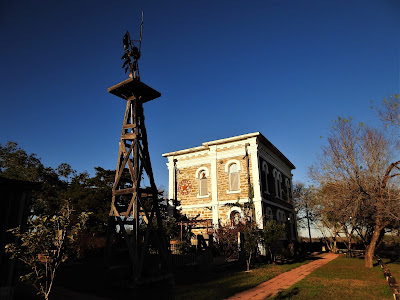 Arriving in the Coastal Bend of Texas in the early 1800’s, Irish immigrants became the first settlers of a region that includes what is now known as the town of Oakville. At that time the community was referred to as "on the Sulphur" because it was on Sulphur Creek. It was also called Puenta de la Piedra ("Rock Bridge") by Spanish gold seekers, because two miles east on the Nueces River the San Antonio-Brownsville road crossed a natural rock bridge. After the Texas Revolution, Oakville was a station on the stage line from San Antonio to Corpus Christi. It had become a bustling place of commerce because it was the crossroads of ox-cart caravans and mule trains that crawled the muddy roads of Texas between the coast of the Gulf of Mexico and Brownsville to San Antonio. Oakville was the half-way point and merchants & travelers used it as a rest stop on such long, hazardous journeys of the day.
Oakville became county seat after Thomas Wilson offered 640 acres for a townsite; residents accepted the location on September 8, 1856. The name was taken by the court from a newspaper advertisement of business lots. Oakville had the county's first post office, established in 1857, and the first courthouse was built. The Oakville Baptist Church, constructed in 1856, had 128 members by 1857. 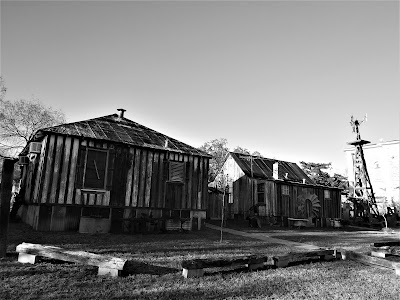 During the Civil War and for some years afterwards, Oakville and the surrounding region became a "hotbed of lawlessness." Looking through old newspapers, I found this article from the "Austin Weekly Statesman" October 5, 1876: "The state of society about Oakville, a frontier village, has been simply terrible. The people are divided into two classes; one, permanent, cattle-growing farmers; the other, horse and cattle thieves. They have shot and killed one another until honest men feared to tell the truth, and to punish red-handed villainy was impossible."
Historian Walter Prescott Webb described Oakville as "a hard country where civil authorities were helpless and took no notice of any outrage." As the county seat, Oakville grew into a thriving town that shipped cattle, horses, cotton, and wool, with a dozen or more stores, two hotels, a livery stable, a steam gristmill and cotton gin, a school, and two churches. However, with this boom of activity, the thought of the Wild Wild West that TV shows and movies were made of come to mind.
Growing to over 400 in population, there were 7 saloons in Oakville to provide the cattle crews plenty to drink and entertainment. Many stories of drunken cowboys, a lot of liquor flowed and many thrown in jail to sober up. Some of this spilled over into frontier violence in the form of horse thievery, cattle rustling and murder.
It took Texas Ranger Captain McNelley to clean up the lawless element in the 1870's. The Texas Rangers cleared out the outlaws in the region and brought them to the Live Oak County Jail in the county seat of Oakville, for justice. The standing historic jail was the third jail used in Oakville, the first two proving inadequate. The first one was a mud structure and the second of wood; both of one story construction. It was decided that something had to be done - for one, angry citizens could shoot the prisoners dead thru the jail bars in the absence of the Sheriff whilst he was away handling business. 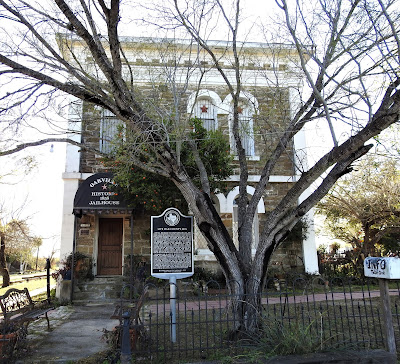 The stone jail became a source of community pride. It was the latest design, the state-of-the-art in incarceration at the time of its construction. At two stories tall, it provided for safe lock-up in the upstairs cells until the judge arrived and provided formal offices for the Sheriff downstairs in which to conduct business. It also allowed for the sheriff's or jailer's family to reside on the first floor should they elect to do so. This important building served as the county’s jail from 1887-1919. The jail was constructed of hard native 22” sandstone, rough-hewn blocks, hauled by ox-cart from a nearby quarry.
For the burgeoning community, a jail of this stature was literally an advertisement and enticement to incoming settlers that Oakville would be a success in that it promoted civility and safety for it’s residents. The "modern" stone Oakville Jail of the 1880’s symbolized the arrival of the law to Oakville and to frontier Texas where previously only the six-shooter, rifle and the Texas Rangers administered justice to the wild and woolly lawless. Many a badman came to lament the day he entered the Oakville Jail. It is told that over 40 men hanged in the notorious sprawling live oak “Hanging Tree” outside on the Town Square.
Law and order once again established, Oakville's location as the halfway point between San Antonio and the Gulf Coast continued to create a boom of activity and business. The county's first free school building was established in 1881, and in 1899 Oakville established the county's first independent school district. The Oakville First National Bank, opened in 1905 by Dudley Blair and Lee Hinton, was also the county's first. The population of Oakville reached 400 in 1885, fell to 320 in 1892, then rose to a maximum of 450 in 1914. 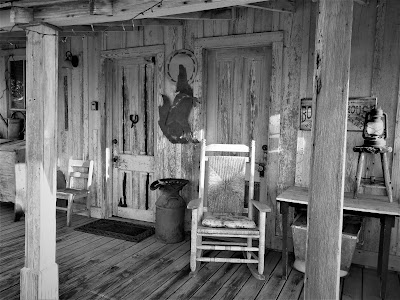 Oakville's demise came just as many a ghost towns did in the west.  About 10 miles to the south, George West had plotted and named a town after himself. He courted the San Antonio, Uvalde, and Gulf Railroad to lay their tracks through his town and succeeded in 1913. The residents of Oakville began relocating to George West. And in 1919, George West became the county seat when its founder offered $75,000 to build a new courthouse there. State highway maps of 1936 showed a cemetery, two churches, a school, and several businesses and residences at the site. In 1940 the community reported a population of 350. By the 1970's only the Baptist church, the post office, three service stations, and scattered dwellings remained. 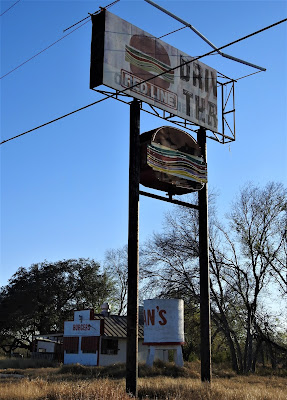 The State of Texas designated the town of Oakville a historic landmark in 1936 and placed a granite marker there. In 2004, the Oakville Jail was placed on the National Register of Historic Places.
Since the 1970's when Albert and Mari Davila first spotted the two-story stone jailhouse rising up out of the surrounding live oak and cactus. Over the following years, every time they'd pass by on their way down to Padre Island, they would stop for another look and exploring what appeared to be an abandoned town square. They eventually fell in love with the jailhouse and wanted to turn it into their vacation retreat house. They found the owners and purchased the Oakville Jail along with the abandoned town square in 2005.
With no windows or doors, they discovered many critters now calling it home as well. It was a slow process clearing up and cleaning out, but in 2007 restoration of the jail was completed. Locals had been admiring the work and inquiries into renting the jailhouse for special events and overnight stays began coming in. One by one the Davila's have been restoring old structures and adding to their number of rooms to rent. You can find more information about the restoration and photos at their website oakvillejail.com. 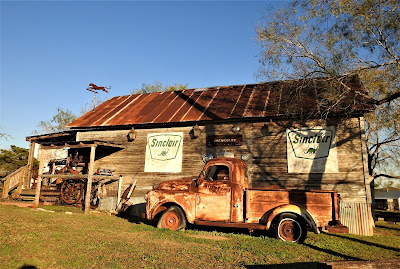 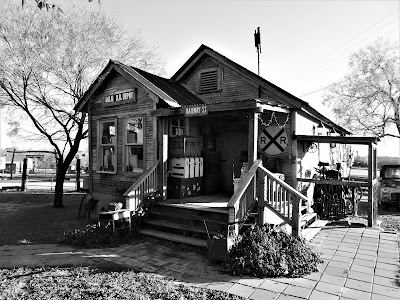 So that's it for another edition of my blog. I really enjoy finding these once forgotten treasures like the Oakville, Texas ghost town and sharing them with you. I'm also glad to see that someone has taken an interest and begun to restore the town square into what a typical pioneer town square might have looked like back in the 1800's. 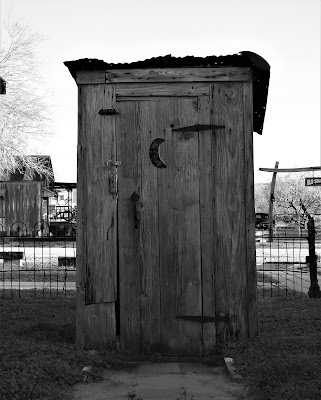 For some reason, the closing theme song of the Beverly Hillbilly's TV show is running through my head. Yeah I know it's got nothing to do with Texas. But I'll leave it with you as anyway, though slightly modified:
"Well now it's time to say good bye to You and all your kin.
And I would like to thank you folks fer kindly droppin in.
You're all invited back next week to this blog of mine,
To have a heapin'helpin of these words that come to mind.
Geocaching it is. Explore a spell, Put the hiking boots on.
Y'all come back now, y'hear?"
Posted by Mark at 12:18 PM