2019-04-14: Geocaching Fossils, a Cemetery, Dams and Aqueducts in Central Texas

So I got a late start this morning on my Sunday drive of 360+ miles from Killeen, Texas down to Roma, Texas for a week of working. But I still managed to squeeze in some geocaching in the San Antonio area. Let's get going... 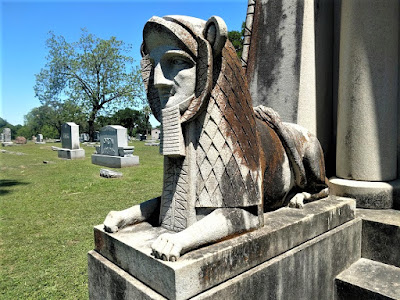 My first stop was at Cibolo Creek for some fossils and an earthcache (GC3CC0F). Here I found the same kinda fossilized rock used on the fort at St. Augustine back in Florida. After getting the answers I needed to get credit for the cache, I went to look for the traditional geocache that was hidden here as well. I wasn't thinking clearly about that one though. It was called "Bridge Over Troubled Water" (GC20H46). I had forgotten that I was down by the creek for the earthcache. I looked all around for about 15-20 minutes unsuccessfully trying to find it. Had to log a DNF on that one. Thinking back on it now though, it's rated a 1.5/1.5 cache and probably an easy find up by the road on TOP of the bridge! Oh well, maybe next time. 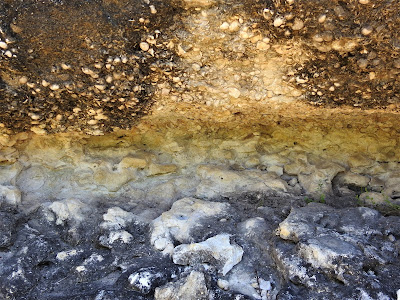 Continuing down the road to a quick roadside park and grab geocache. It was an easy cache to find, but a challenge cache to log a find (GC329EA). The challenge for this one was to find 150 geocaches hidden by the same geocacher. Currently I have found 150 geocaches each by eight different cachers. 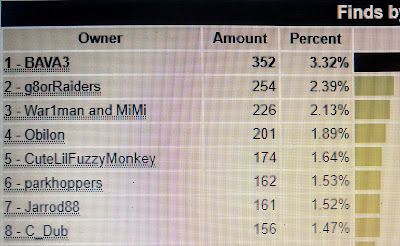 My next two geocaches are at the Mission Burial Park Cemetery (GC6JVNP, GC6KY0W). With interments dating back to the 1850's, there are nearly 50,000 burials here. The one that caught my attention most was this Sanderson Family Mausoleum. Containing six members of the family, beginning with David D. Sanderson (1822-1892). The entry is guarded by two sphynx looking statues. 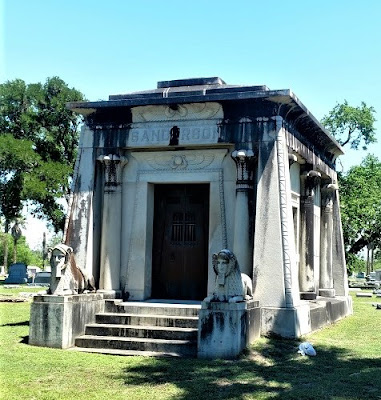 Next door to the east of the cemetery runs the San Antonio River. There you'll find a virtual geocache called "Dam, Ditch, and Aqueduct" (GC4CB0). This was a two-part multi-virtual. My wife and I were here back in November and found the first stage but never made it to the final. Today I'm back to complete the find. Along this section of the river is the Espada Dam and Aqueduct.
From the historical marker: "This is the oldest continuously used Spanish built diversion dam in Texas. Has provided irrigation water since its construction sometime between 1731 and 1745. The dam originally 270 feet long, is built on a natural rock foundation. A portion of the east wing is now covered by the nearby flood control levee. Despite a true reverse buttress making an angular turn at the center of the channel the dam has withstood many years of destructive floods with only minor repairs required to maintain its sound condition. The 8 foot tall structure diverts approximately 4500 gallons of water per minute into the 4 mile long irrigation ditch known as "Acequia De Espada." By gravity flow the acequia provides irrigation water for 400 acres of land in the vicinity of Mission San Francisco De La Espada. The mouth of the acequia may be seen on the opposite bank of the river just upstream from the dam. The dam and irrigation system was engineered by Franciscan Missionaries and constructed by Indian converts, a remarkable feat at that time." 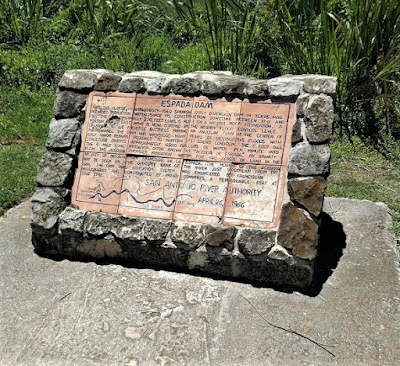 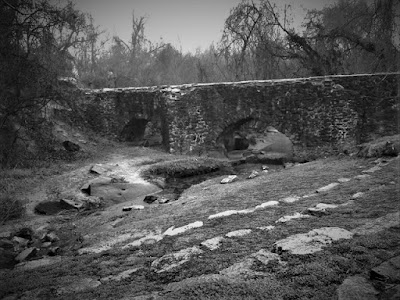 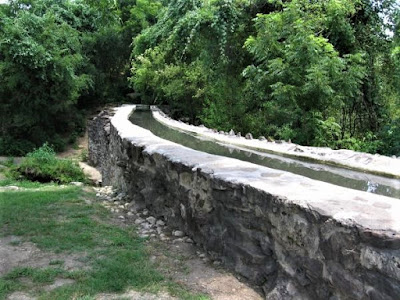 So that was it for today. Grabbed some lunch and gas afterwards and then straight driving all the way down to the Rio Grande Valley. I'm glad you rode along with me and I'll see you again next time.
Posted by Mark at 8:07 AM