2019-04-01: Geocaching and Exploring Early Mexican-American History in the Rio Grande Valley of Texas

Hello and Welcome Back! So after my long and packed roadtrip from Texas to Minnesota and back, I had another two weeks off before getting called back to the wind farm down in the Rio Grande Valley. I managed to get one week of work behind me before overnight and this mornings rains made it too muddy to work. But a rain day off from work means an extra day for geocaching and exploring early Mexican-American history of small towns in the Rio Grande Valley. 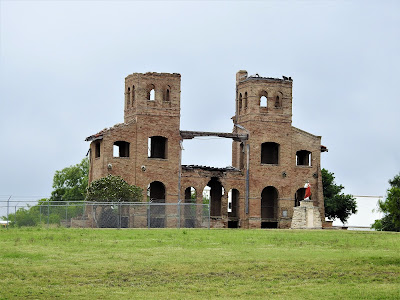 My first stop is the town of Roma, Texas, just a few miles down the road from where I'm staying. A new cache was published over the weekend called "Cactus House" (GC85FFK). Just a couple of blocks from Roma's point of entry bridge over the Rio Grande River into the United States, is an old long abandoned brick house that's been taken over by nature. I found the geocache on this Monday morning and a nice clean log sheet to claim a First-to-Find! 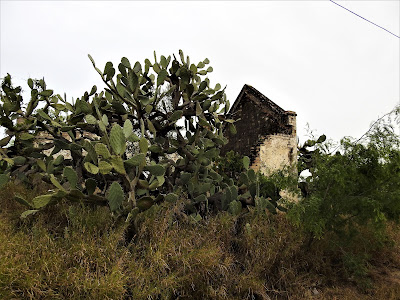 From there I went a few blocks over to the Roma Historic District. Not a typical border town settlement, Roma, founded in 1765, is distinctive for its historic high-walled, gated, family compounds that reflect strong ties to 18th century northern Mexico, which was then part of the Spanish Empire. The planning, colonization and land grant system was the brainchild of Jose de Escandón and focused on civil development. Today, Roma is the only American Spanish colonial settlement that preserves the character of Escandón’s town planning.

The community is directly across the river from Ciudad Miguel Alemán, Mexico. The Roma Historic District, a National Historic Landmark district in the City of Roma, contains architecture influenced by Spanish colonial culture and by the bustling 19th century Rio Grande trade route that brought goods and people from the Gulf of Mexico to the continent’s interior. The Roma Historic District contains the best and most intact collection of ethnically diverse buildings and structures in the border region.

The site of Roma was part of the Mexican town of Mier about 10 miles northwest of modern Roma, in what was New Spain’s Nuevo Santander. Don José de Escandón founded the Spanish colonial province of Nuevo Santander in the mid-18th century. Spanish colonists from Mexico settled Mier in the 1750's and received land grants along the Rio Grande, where they formed family ranches. In the 1760's, the Spanish colonial government granted two tracts on the northern side of the river to the Salinas and Sáenz families, who were among the founding families of Mier and whose descendants still reside in Roma. The tracts they received were the first permanent European settlements at the Roma site.

Soon after the Mexican War for Independence ended in 1821, Roma became an independent community. One of the earliest records of Roma is in American colonist Stephen F. Austin’s chart of Texas, which literally put Roma on the map. After the Mexican-American War ended, Roma belonged to the United States. In the 1840's, Euro-American entrepreneurs settled in Roma, Texas, and married into the founding families.

German immigrant and master-builder Enrique (Heinrich) Portscheller settled in the region in 1865, married a Mier woman, and eventually moved to Roma. Portscheller added to the beauty of the local building techniques with his trademark decorative molded brick and use of New Orleans-type wrought-iron balconies. In addition to his work in Roma, Portscheller designed buildings in the border towns of Mier, Rio Grande City, and Laredo. Though there are other towns where this type of brickwork endures, Roma sustains the highest level of density, integrity, and quality in its 19th century Rio Grande brick and stone craftsmanship.
The John Vale / Noah Cox House (GC7JGVK) served as both a home and business location for John Heinrik Vale and Noah Cox, who were deeply embroiled in Civil War activities in Roma. Vale, a Swedish immigrant, had come to America in 1840 seeking adventure. During the Mexican American War, Vale volunteered for Zachary Taylor’s Army of Occupation and was encamped in Camargo. He chose to remain in the region, marrying a woman from Ciudad Mier in Tamaulipas and taking up residence across the Rio Grande in Roma. In 1853 he built a two-story home on the town’s main plaza. 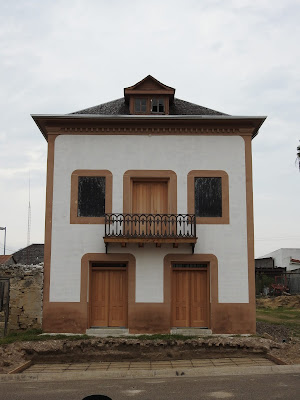 Three years later he sold the house to Cox, a representative of the New Orleans firm of Stadeker & Mecklinburger & Cox, who continued to use the house as both a residence and mercantile center. In addition to his mercantile operations during the Civil War, Cox also served in the Confederate Texas Cavalry. For his part, Vale engaged heavily in the lucrative cotton trade that funneled through the city of Roma during the Civil War, doing business with Joseph Kleiber, a key player in Confederate business operations on the Gulf of Mexico.
The geocache I found, my second attempt at looking, was on the ruins of the wall which surrounded the side and backyard. Hopefully they don't completely restore this section of the wall because I like the way it looks now. 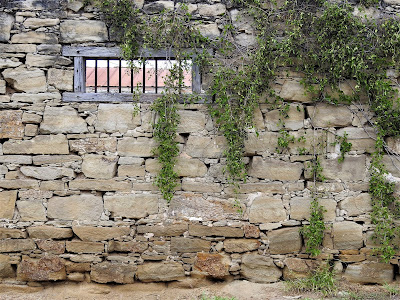 Also built by John Vale around 1850's, the Leocadia Leandro Garcia House is similar in style and construction to the Noah Cox House across the Plaza. Originally, the house contained commercial space on the ground floor with residential space above. The house was later remodeled as a building for a dance hall and now owned by the Knights of Columbus. 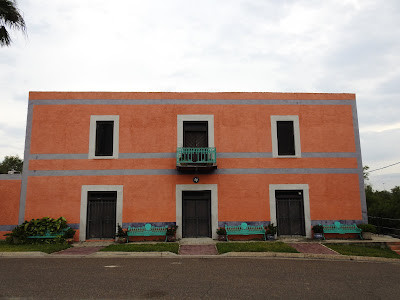 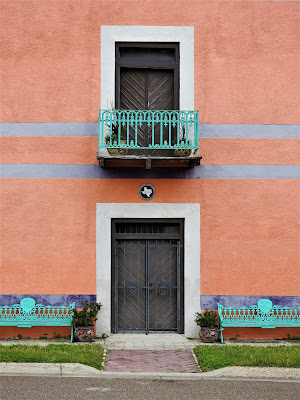 Manuel Guerra, the legendary political and economic boss of Starr County, commissioned Portscheller to build his family compound in 1884. A native of Mier, Guerra printed his own currency to be redeemed by his ranch workers at his store. The two-story brick structure sits assuredly along the upper western edge of the plaza, extending for half a block with fine classical brick detailing and a historic two-color metal balcony that delicately embellishes its second story. A one-story warehouse completes the L-shaped complex enclosing a courtyard with original outbuildings. Never to be outdone by competitors, the Guerra family also operated the first gas station in Roma with a pump installed near the chamfered corner entrance (since removed). 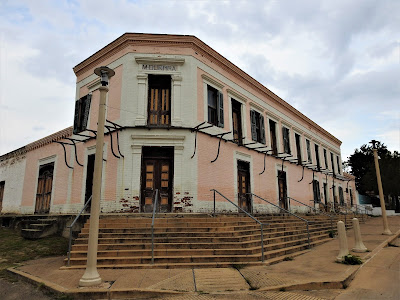 The seven men, pictured in 1911, in Roman collars and broad brimmed hats were Missionary Oblates of Mary Immaculate (OMI) who had travelled from their missions scattered throughout the Rio Grande Valley along the river. Since 1849, this Calvary of Christ have been building churches and chapels from Brownsville to Laredo. 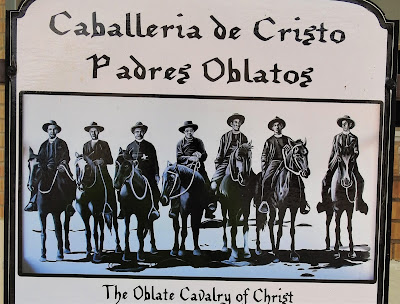 Arriving in Mission, Texas and turning back towards the river, I make another stop in Anzalduas Park. It's a riverside park popular with bird watchers. I was here once before and found a couple of geocaches. But there was one that I previously DNF'd (GC6AF7Y). Today was redemption as I found it this time. Out on the Rio Grande I could see why this park was popular among bird watchers. 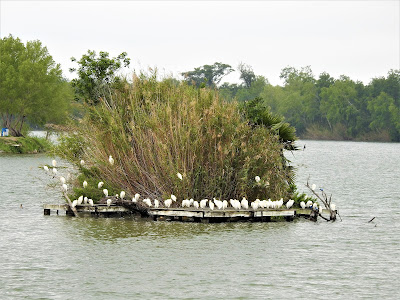 At my next geocache (GC84NC2), I see the ruins of this structure up on the hill. Next to the Juan Diego Academy stands the remains of the Villa Queen of Peace (photo below and at top of page). Though the cache page says Oblate Monastery, I can't find any information about it's history or that it was indeed a monastery. So I'm not sure when it was built or what happened to it. If you have any information as to its history, please comment below. 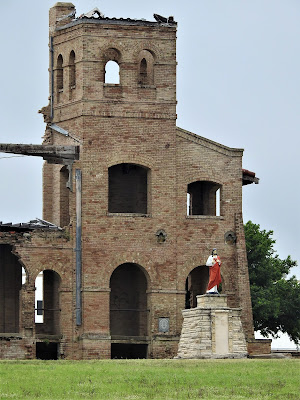 Nearby was geocache (GC6Z60B) and my next piece of history. The La Lomita (meaning small hill) Chapel was constructed by the Oblates in 1865, then rebuilt in 1899 on these 122 acres willed to them in 1861 as it was nearly halfway between Brownsville and Roma. The Oblates moved their ministry to the growing city of Mission in 1908. Now it is a historical landmark, a park, and a place of pilgrimage. 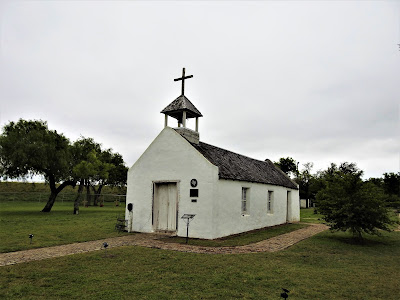 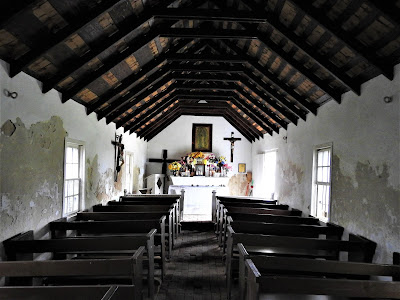 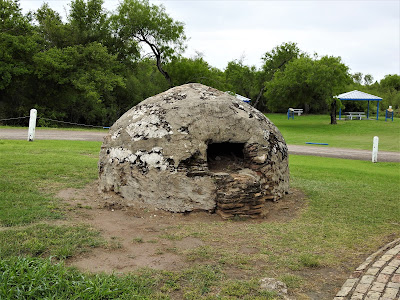 I hope you have enjoyed the sampling of early Rio Grande Valley history. There is much more to see if you every get the chance to be down in this area. I didn't even get to any of the cemeteries. Overall I managed to find many more quick roadside geocaches for a total of 32 finds for the day.
Until next time, I look forward to your comments here or on any of my social media accounts. Hopefully I have inspired you to go out and explore the rich history along the many backroads and small towns of this great country.
There are new ways to follow me. Follow the blog directly by using buttons on the right of your computer screen. Or through various social media platforms:  Facebook, MeWe, Parler, Gab, Twitter, Instagram, MAGAbook, and Reddit. Follow us on any or all of these platforms and whichever you choose, please leave your comments. We'd love to hear from you and it encourages us to continue sharing our adventures.
Posted by Mark at 11:49 AM