2019-04-07: Geocaching Through Texas Independence History in Cemeteries, Memorials, and a Haunted House

Welcome back to AwayWeGo's Geocaching Adventures Blog. My geocaching name is AwayWeGo.US and these are stories about our travels around the United States. Like most weekends, today is another Sunday driving 360+ miles back to work day. I live in Killeen, Texas and drive down to Falcon Lake in the Rio Grande Valley where I work as a construction surveyor during the week. 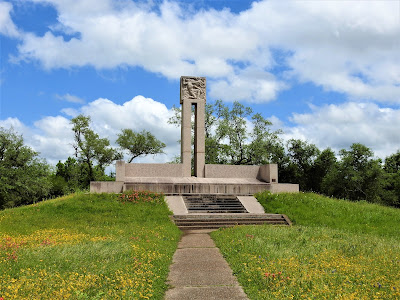 After about 30 minutes of driving, my first stop was at an IHOP in Georgetown for breakfast. Before leaving, I grab the quick geocache just outside the parking lot (GC20T2K).
I decided to make a detour and attend this geocaching event in Victoria, TX. Heading down US-183, I made a stop at the San Pablo Cemetery in Lockhart for another quick geocache find (GC3QKN0). The San Pablo Cemetery has about 100 burials beginning in the late 1930's and is still in use today.
Stopping again at the Luling City Cemetery for another cache (GC3VCVD), you also get a view of a giant watermelon. In 1954, Hermon Allen, principal of the Luling Elementary School, proposed the idea of a celebration to honor the growers and promote the Luling watermelon market. The festival includes a watermelon contest for the largest grown. The biggest Black Diamond champion melon in the festival’s history weighed in 141 pounds. The event has grown so large that as many as 30,000 people have attended. 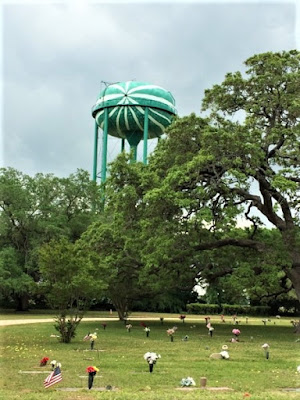 Arriving down in the town of Gonzales, TX, I stopped for a virtual geocache at the "Old Time Justice" (GCGB8Q). The jail was built in the 1880's and is now a museum. It wasn't open at this time. I'll have to return one day to take a tour myself. The photos of it look interesting.
There's a legend that while Albert Howard was waiting for the date of his hanging from his jail cell, he had a view of the clock tower on the courthouse to watch the time. Until the very end he swore of his innocents and said that the four faces of the clock tower would never keep the same time again as long as he was hanged. Over the years and several attempts to fix it, the clocks have never kept the same time. 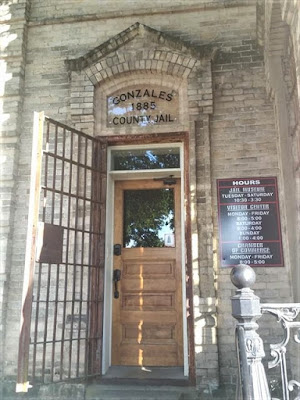 Then there's also the "Immortal 32" virtual cache (GCG84Q). In February 1836, Colonel Travis sent a letter from the Alamo to all Texans and all Americans while under besiege by the Mexican Army. Only 32 men answered that call for Texas Independence and all 32 were from the town of Gonzales. This memorial and reflecting pond are dedicated to those brave 32 men who gave their lives in support of their brothers at the Alamo. 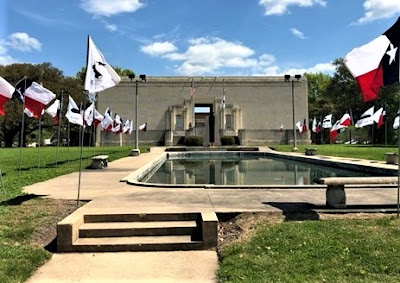 Well I made it down to Victoria, TX at the Ted B. Reed Park for the geocaching event (GC83TBD). There were eight in attendance and always good meeting other geocachers. I got to stay for a little while before hitting the road and continue south.

Just to the west outside of Victoria is my next geocache at the Coletoville Cemetery (GC4T8AB). Originally named Steiner's Settlement, after early German Carl Steiner. The settlement dates back to 1849. When an epidemic of diphtheria hit the German settlement, two of August and Thekla Spitzer's children died. Ten-year-old Henry and six-year-old Robert were buried by their parents in 1873 on this site. In May of 1873, the Spitzer's deeded the land to the trustees of the new school and evangelic German church of the German community of Steinerville. The community was later renamed Coletoville for the nearby Coleto Creek.
Continuing southwest into Goliad County, my next stop was at the La Bahia Cemetery (GC282ND). There you'll also find this significant memorial of the Texas Independence. After the battle of Coleto (March 19 - 20, 1836), where a Texas Army under Col. James Walker Fannin met defeat by Mexicans in superior numbers, the Texas soldiers were held in Presidio La Bahia, supposedly as war prisoners.
However, by order of Mexican Gen. Antonio Lopez de Santa Anna, 370 of Fannin's men were marched out and massacred on Palm Sunday, March 27, 1836. The wounded were shot one by one in the fort compound. Col. Fannin was the last to die. Because of their profession, Drs. J. H. Barnard, J. E. Field and Jack Shackelford were spared; about 25 men were saved by a Mexican woman, "The Angel of Goliad". Approximately 30 escaped by feigning death or by swimming the San Antonio River. The Texans' corpses were stripped and partly burned, but left unburied.
This atrocity three weeks after the fall of the Alamo gave Texans part of the battle cry -- "Remember the Alamo! Remember La Bahia!" -- under which decisive victory was won at San Jacinto on April 21, 1836. Gen. Thomas J. Rusk and the Texan Army afterwards marched here and gathered the bones of Fannin's men from the terrain. From Presidio La Bahia the remains were carried in procession to the grave, and there given a military funeral and burial on June 3, 1836. 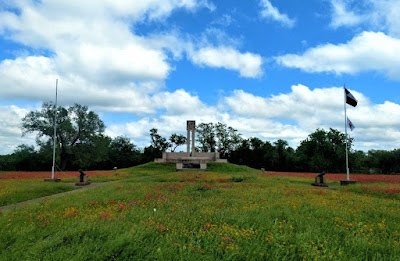 Amid the cruelties of the Texas war for independence, one notable woman committed acts of bravery and compassion. Francisca Alavez ("The Angel of Goliad") accompanied Mexican Army Captain Telesforo Alavez to Texas in March 1836. In seven incidents between March and April, she intervened with Mexican troops under command of Gen. José de Urrea to help captured Texian prisoners at Agua Dulce, Copano, La Bahia, Victoria and Matamoros.
On March 20, Maj. William P. Miller and 75 men of his Nashville Battalion were captured as they unloaded their ship at Copano Bay. Alavez insisted that binding cords which cut off circulation be removed and food and water be provided. The men were moved to Presidio La Bahia at Goliad, where hundreds of Col. James Fannin's troops were already held after their capture at Coleto Creek. At least 342 men were taken out of the fort on March 27 and shot under orders of Gen. Santa Anna in what was termed the Goliad Massacre.
Alavez helped save the lives of many men, including 16-year-old Benjamin Hughes. Another Survivor, Dr. J.H. Barnard, recalled that she pleaded for their lives, helped sneak out some troops at night and hid some of the men. Her humanitarian acts included tending to wounds and sending messages and provisions to those still imprisoned. 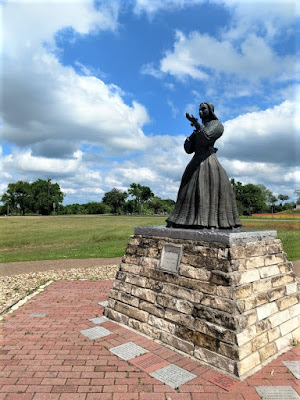 Driving into Berclair, TX, I first arrive at the Berclair Cemetery for my next geocache (GC38VDX). Berclair was a ranching area when the railroad arrived in 1889. The name supposedly derived from the combination Bert and Clair Lucas, one of the ranchers. A hotel was built to provide housing for the railroad workers in 1887 and travelers once completed. A post office was established in 1889. The cemetery below covered in spring wildflowers. 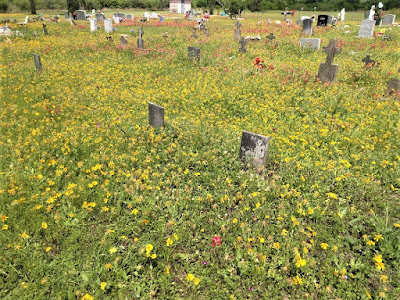 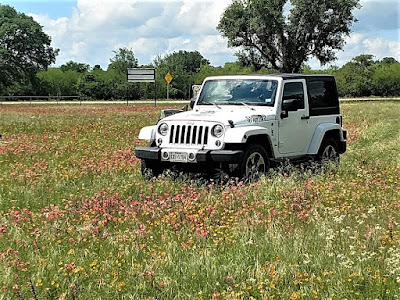 One remaining attraction in Berclair is the haunted Berclair Mansion (GCYFCJ). This 10,000 square foot, 22-room mansion was built in 1936. Etta Terrell had the house constructed out of concrete and steel in an effort to "fireproof" it after her previous house burnt down. Etta and her four sisters lived in the house. Etta passed away in the house in 1956. The sisters remained living in the mansion until the last one passed away in 1968. The homes furnishings remain as the sisters left them with antiques dating back to the 1700's. Then in 1999, the heirs in the family donated the mansion as a museum to the Beeville Art Association.
The Art Association hired maintenance workers and landscapers to keep up the property. It was about this time when unexplained sightings and sounds started happening. Several reported seeing elderly women in the windows, waving to them. Volunteers for the museum say they’ve heard voices as well as doors closing in the otherwise empty house, for no apparent reason. And the Corpus Christi Spook Central’s supernatural investigation team has reportedly recorded at least 10 unexplained voices occurring in the mansion over the period of one night.
The house is open for tours the last Sunday of each month. We may have to come back for another visit one day. 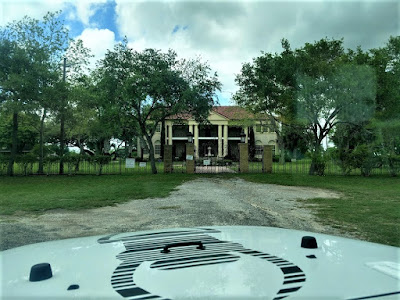 Still having 3 hours of driving to go plus stopping at the grocery store and grabbing dinner, I made that the last geocache for the day. The was a lot of historical and interesting stops today that I didn't get to explore more. Just means I'll have to go back again one day.
Thanks for stopping by and I hope to see you again soon.
Posted by Mark at 7:32 AM