2019-04-21: A Roadtrip from Oklahoma to Texas and Visiting a Petrified Villa, an 1800's Church, and the Historic Chisholm Trail

So after spending the day yesterday in Oklahoma at the Wichita Mountains Wildlife Refuge, today is the roadtrip back to Killeen, Texas. And of course we can't take a drive that far without any geocaching stops. Anybody want to go for a ride with us? There's always room for virtual passengers. Let's fuel up and hit the road.

After checking out of the hotel this morning, I walked across the street to the grassy area by the I-44 onramp. A quick geocache in a tree so close that I just can't leave without finding (GC2W45H).
There were some other geocaches around Lawton with some high favorite points and we wanted to check those out also. This one was a very creative container (GC47ZEA). The geocacher took some time creating this one. You could almost call it "Me and Mini-Me"! Oh, and the name of the road that this coffee shop is located...: Cache Road! Definitely gets another favorite point from us too. It's too bad that the coffee shop itself wasn't open this early on a Sunday Easter morning because we hadn't found our morning coffee yet. 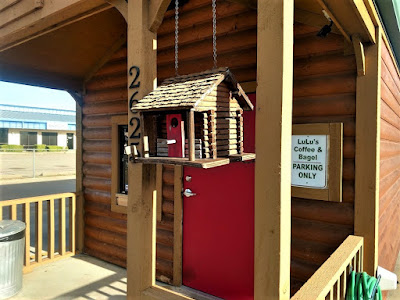 Another high favorite geocache was a virtual cache at the Great Plains Museum (GC81E5). We like museums. But of course not open at this time. So a quick photo by the "long-horn bison"? 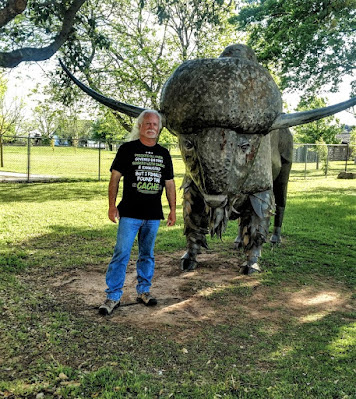 Our last geocache (GC5FDZ7) in Lawton, Oklahoma was at the Elmer Thomas Park. It a large park behind the Great Plains Museum. It was called "Circle the Wagons" and it was at an old covered wagon display. A tricky cache to find because the camo blends in really well. One out of three cachers end up logging a DNF. However, I was fortunate enough to find this one. Though I was so intent on finding this one I forgot to take a photo of the wagon.
Driving over to Duncan, Oklahoma for our next virtual geocache (GC1C59) at the Chisholm Trail Heritage Center. The Chisholm Trail was a trail used in the post-Civil War era to drive cattle overland from ranches in Texas to Kansas railheads. The trail was established by Black Beaver, a Delaware Indian scout and his friend Jesse Chisholm, a merchant and part Cherokee. The trail was used from 1867 through 1884. The herds on the trail rides usually numbered around 2500 to 3000 head of cattle each, but have been as many as 10,000 in a single herd. The herds were usually spaced about 10 miles apart for the long journey, which was about a day apart. At this geocache location is a large bronze statue representing such a cattle drive. 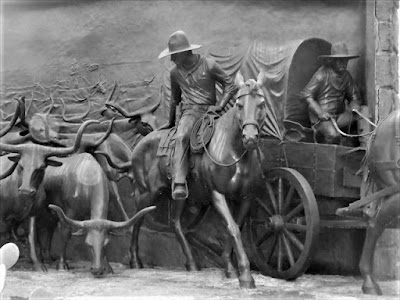 Also in the town of Duncan is one that I just couldn't pass up on. Because I work as a construction surveyor, it was a given that I go find a geocache called "The Survey Base Line" (GC6DZZG). "The distinctive checkerboard pattern of land boundaries in Oklahoma and all across the West was conceived by Thomas Jefferson in the early 1780's, long before the rough and rugged character of this vast wilderness had been charted. Jefferson was the grand architect of the distinct western landscape. In the late 1800’s government surveyors were commissioned to survey the public lands for sale or grant to the public."
This cache is located at a historical geographic monument for the Indian Base Line in Oklahoma. The "Initial Point was established by the U.S. Government in 1870. All Oklahoma except the panhandle was then divided into townships North and South and Ranges East and West of the Initial Point. The Indian Base Line is two-tenths of a mile south of this point on Beech Road. Duncan is 41 miles west of the Initial Point. The stones in this monument were taken from the Initial Point." 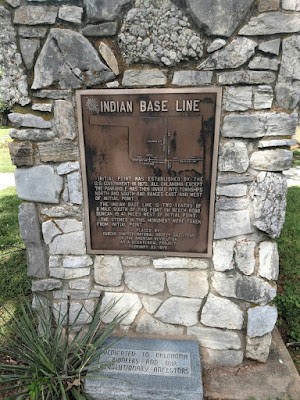 Our last stop in Addington, Oklahoma is another geocache and historical monument marking the Chisholm Trail Lookout Point (GC5W7H5). The two hills here represented landmarks used by Cattle Drivers on the Chisholm Trail. As they came out of the Red River valley they could see these two hills and used them to drive the cattle north to this location. Originally known as Lookout Point, they became known as Monument Hills. The Chisholm Trail and millions of Longhorns, went just to the east of this hill marked by this monument. 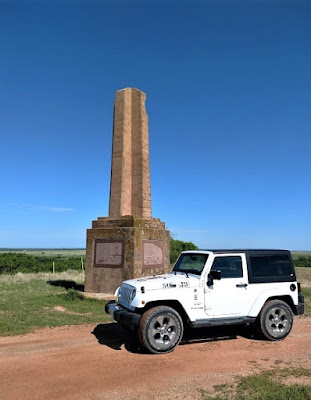 Driving along US-81 now down into Texas, we made a quick roadside picnic area stop to grab two geocaches (GC10MJD, GC431J6).
Arriving in Decatur, Texas, we made a "must-do" geocaching stop for a roadside attraction Americana history. "Petrified" (GC3X4ZF) is located at the Texas Tourist Camp Complex. From the historical marker: Local businessman E.F. Boydston (1888-1945) purchased this site, a former seed lot, in 1927 for $400. Recognizing a potential business opportunity in offering services to the traveling public, he built a wooden shed and gas station in 1927. Travelers were allowed to build campfires during overnight stays, and by 1931 Boydston added three wooden cabins with garages to the camp complex. The buildings were later faced with rock, and more cabins and garages were added in 1935. The original wooden gas station (photo at top of page) was covered with petrified wood in 1935 when the highway was widened and remained in operation by the Boydston family until 1988.

The Texas Lunchroom, a one room frame building, was built in 1929. Renamed The Texas Cafe in 1935 and refaced with stone to match the other buildings in the complex, it was enlarged to provide second floor living quarters. Popular with local high school and college students, as well as families and the traveling public, it was closed in the 1960's after a highway bypass built west of town diverted traffic from this area. The cafe re-opened in 1993. One of the few intact examples of tourist camps built throughout Texas in the mid-20th century. This property is significant for its association with the early development of automobile tourism. 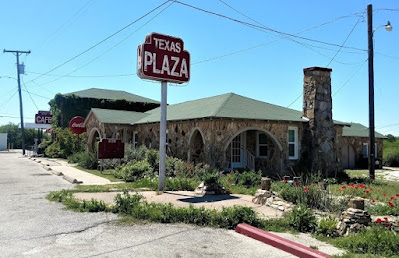 Our last stop, also in Decatur, was for the geocache "Goin' to the Chapel" (GC198AR). The Episcopal Church of the Resurrection is the oldest original church building in Decatur. Consecrated by great missionary Bishop, the Rt. Rev. A.C. Garrett. Erected facing Main Street (2 blocks west of square) in 1889. Known as "the little church with the crosses", by 1912 it had deteriorated, but it was restored and moved facing Walnut Street.
In 1940 the building was sold and used as a mattress factory. Then it was rescued the same year and moved to this location, with the sanctuary placed symbolically to the east towards Jerusalem. 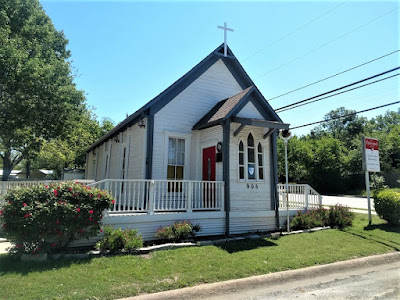 So that's it for today's roadtrip back home from Oklahoma to Texas. Thanks for riding along with us. Feel free to leave your comments and/or share our adventures with your friends. You can find us on most social media platforms:  Facebook, MeWe, Parler, Gab, Twitter, Instagram, MAGAbook, and Reddit. Follow us on any or all of these platforms.
See you next time...
Posted by Mark at 6:24 AM