For today's adventure, we are once again Away-WE-Go for this Easter holiday weekend. Most of these blog posts I'm usually by myself on my Sunday drive back to work. Having this long weekend off, we decided to take a drive up to Oklahoma. 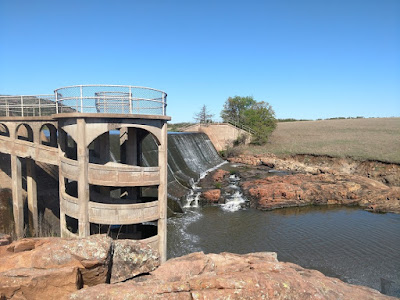 If you recall last month on my long roadtrip back from Minnesota, I had stopped at the Wichita Mountains Wildlife Refuge. I mentioned that they perform a live Passion Play every Easter and have been doing it for nearly 80 years. You can read more about that by revisiting my blog page here. Candy and I thought it would be a great idea to go and see it. So we drove up yesterday.
The granite walls of the Wichita Mountains offered refuge to waves of people over many centuries, beginning with Nomadic Native Americans. In the late 1800's, conservationists made plans to re-establish bison and other imperiled species in the region. Looking for the best habitat, they decided that the sheltered prairie of the Wichita Mountains was the ideal location.
This morning we came here to see more of the natural refuge, do some hiking, and hopefully see some wildlife. For our first stop we drove over to French Lake and parked by the Bison Trail for a hike over to the dam. The many dams located in this refuge which form all the lakes were constructed in the 1930's as park of the Federal Work Projects. We hiked the Elk Trail back to the GeoJeep. It was a pleasant, clear, perfect weather morning. Got some nice views of the lake and the dam. The only wildlife we saw was a bunch of turtles and some fish in the lake. 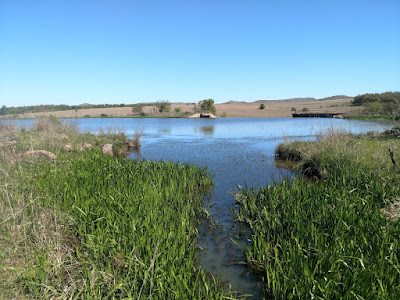 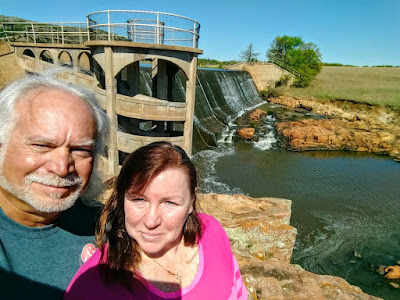 From there we drove south on Indiahoma Road down to our first geocache. The "Heart Rock Earthcache" (GC3AQ2J) is a large outcrop of lava rock forced up from below the surface. Many, many years of erosion created this heart shaped rock on a pedestal that's about chest high when standing next to it. If it wasn't at such an angle, it'd make a great picnic table. While there is a pull-off parking area for the scenic views, there's no mention of this heart rock formation. Just another reason why I like geocaching to find the unique roadside attractions. 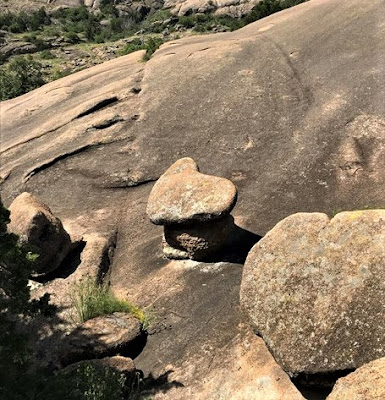 Just as we got back to the GeoJeep, we were just in time to see a parade of more than a dozen old tractors going by. Now I'm not really into tractors but seeing some antique machinery being driven down the road was pretty cool. 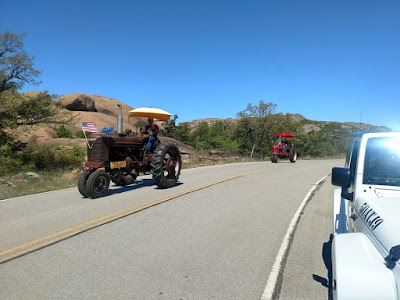 Back up on State Road 49 through the middle of the Refuge, we come upon Prairie Dog Town. A field of hundreds of prairie dogs running around and popping up and down from their underground city. I wish I had my Nikon camera with me but I left it back in Texas. So I only have this fuzzy phone photo. Takes good pics normally, but not so good when you zoom in close. 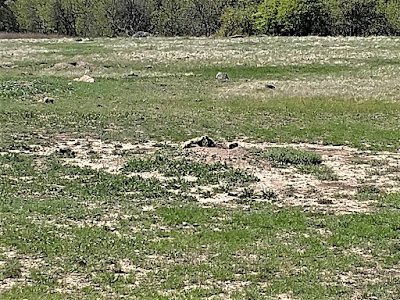 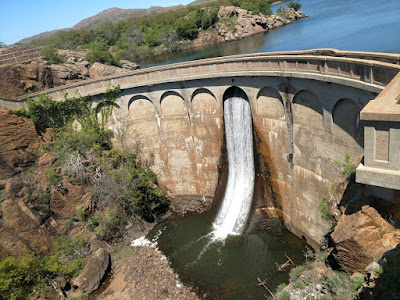 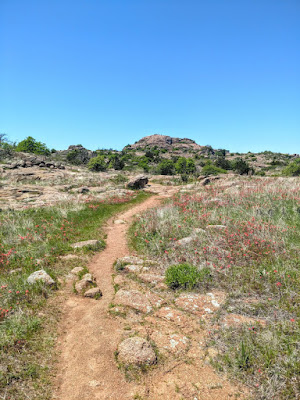 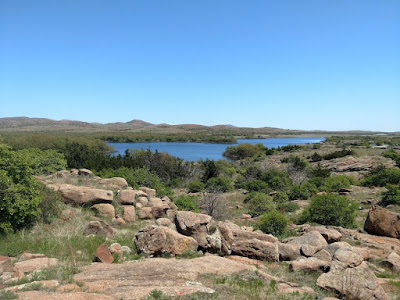 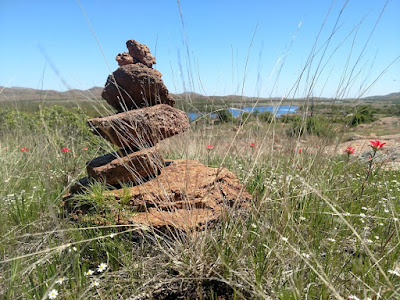 Returning to the GeoJeep and continuing down the road a few miles we finally saw some bison. So we pulled over, took some photos, and watched for a while. 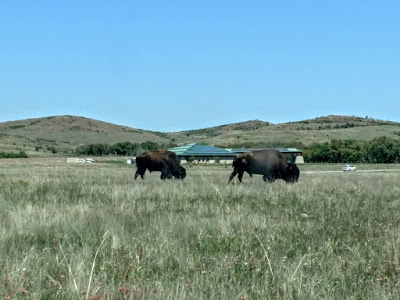 It was now mid-afternoon and we didn't plan very well. We're now out of water and hungry because we didn't think about bringing snacks or food. We stopped by the Holy City of the Wichitas for a quick look to see what of the situation. People were already gathering and picking out their spots to watch the Passion Play which was still 10 hours away from starting. Candy got a quick look around at the buildings. They had bottled water but nothing to eat. So we needed to go back into Lawton to eat and return later.
As we were driving out we stopped at this structure. Completed in 1927, Benjamin Ferguson and his family lived in this house until 1942. About a half mile to the east is the Ingram Homestead. They were both built out of the round granite core stones that cover the hillsides of the refuge, and both were acquired during the 1901 land lottery held at Fort Sill. They reflect the hard work, ingenuity, and craftmanship of earlier generations.
In 1942, the U.S. Army used the right of eminent domain to acquire the homesteads to expand the artillery range of the adjacent Fort Sill. Fifteen years later the planned expansion was scrapped and the homesteads became a part of the Refuge. In 1981 they were added to the National Register of Historic Places. 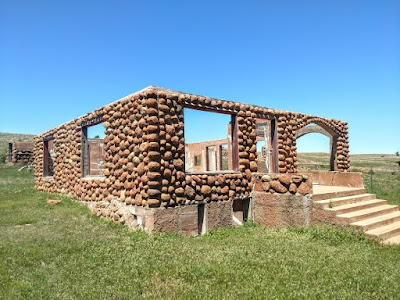 After grabbing some dinner and now back at the hotel to freshen up after all the hiking today, we were too exhausted to drive back to the Refuge to sit and wait for the play to start. But now that we have a better understanding of what it would be like, we're better prepared to come back again. Though next time we'll have folding chairs, a cooler with drinks, and plenty of food.
Still a great day of hiking and exploring the Wichita Mountains Wildlife Refuge. Come back tomorrow for the roadtrip home. I've got a few interesting places on the agenda for the roadtrip home. See you then...
Posted by Mark at 5:38 PM