Well after 16 hours of driving and geocaching yesterday, it's time to hit the road again for day two of my roadtrip from Texas to North Carolina. Todays drive will take me from Alabama, through Georgia, to South Carolina. So jump in and let's see what we can find! 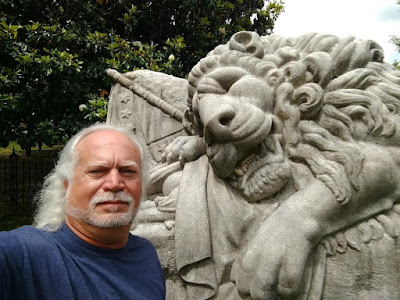 My first stop was for the "Trussville Civitan" Alabama's First Geocache (GC126). This cache was hidden way back on January 2001. The are only 48 geocaches left that were hidden during that month. For geocaching statistics, there's a Jasmer Calendar that lets a cacher know what months their found caches were hidden in. I only had one open spot for 2001 and it was January.
So I arrived near the geocache location in the parking area of a park. At the center of the park was this Veterans War Memorial. Took a quick photo before I went for a walk. 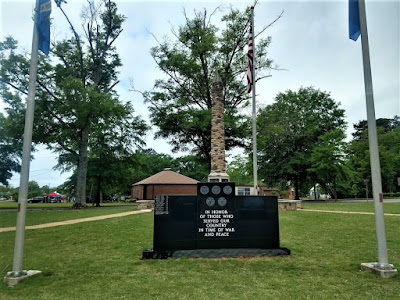 There was a walking and biking paved trail down along the Cahaba River. There were quite a few people out getting their morning exercise along that trail. I'm more interested in what was in the woods and headed for that. Only a few hundred feet in and away from the curious eyes of the muggles, I found the 18 year old prize that has been found nearly 1700 times and added my name to the log. YAY! Now just two more spots for July and August of 2000 to fill in the blanks. Even harder as there are only seven of those in the United States. 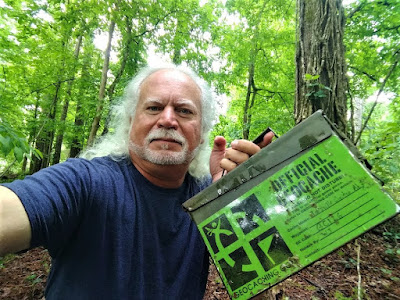 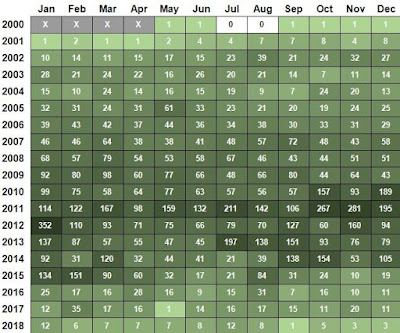 Before leaving town I spotted this old gas station and just had to stop for a photo. The building was originally constructed as a Gulf Service station in the late 1950's. In 2013 the building was bought by Rocky Neason who turned it into the Classic Cars and Garage Museum. The station was transformed into a Standard Oil Gas Station replica and filled with many 50's & 60's era antiques collected by Rocky Neason during his 31 years in the industry. There was a 50's 2-seater T-Bird and a 60's mid-year Corvette behind the bay doors during my visit. But I understand the cars get traded out with his collection from time to time. 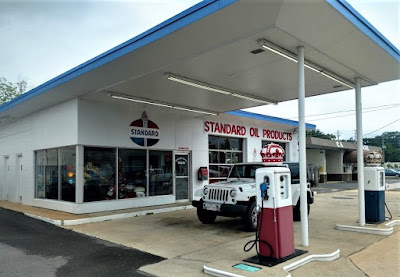 Moving along for a cache in St. Clair County, Alabama. "Final Resting Place" (GC7ETF0) is a geocache located in the Moody Cemetery. There are over 900 interments here dating back to 1860. With the muggle here mowing the lawn, I just found the cache and moved on.
A few quick park and grab caches for Calhoun County (GC82XM4, GC36J12) and a Dunkin Donuts coffee. Crossing the state line into Georgia, I exit I-20 for two more quick caches in Carroll County (GC7F5J3, GC7F5GY).
Now I'm in downtown Atlanta. Not my favorite place to be. But there are some "must do" geocaches there. Fortunately it is Saturday so traffic isn't too bad. The first is a D5/T5 challenge cache called "The Lower 48 States" (GC5EQQT). Located a couple blocks from the state capital, it is an easy cache to find yet a very difficult cache to claim. It requires you to find at least one cache in each of the lower 48 states. I've managed to find one in 49 states, only missing Hawaii.
Then I take a drive over to the historic Oakland Cemetery. It was established in 1850 as the Atlanta Cemetery on 6 acres of land southeast of the city. It was expanded to 48 acres by 1867 and renamed in 1872 to reflect all the oak and magnolia trees. The magnificent entry gate pictured below was constructed in 1896. From 1936 to 1976, the cemetery is neglected and fall into disrepair. The cemetery was placed on the National Register of Historic Places and a restoration began. Eventually the Historic Oakland Foundation was created and maintains the grounds. An average of 105,000 visitors tour this cemetery every year. Today it is my turn. 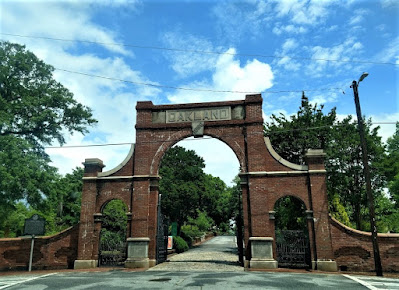 There are two virtual geocaches there. The first one I found is for "The Master" (GCD42A). The geocache is dedicated to one of golfs greatest players, Robert Tyre "Bobby" Jones, who won multiple Masters Championships in the 1920's. You'll find his headstone at the coordinates.
The other virtual geocache is called "The Lyin' Cache" (GC64DF). Oakland’s most centrally located character area is the final resting place of approximately 7,000 Confederate soldiers, many of whom are unknown. Following Oakland’s acquisition of additional land, this four-acre portion of the cemetery began its transformation in 1866 by the Atlanta Ladies Memorial Association (ALMA). Several hundred of these graves were originally marked by simple painted wooden headboards, then replaced by marble markers with rounded tops in 1890.
Near the center of the Confederate Burial Grounds, Oakland’s tallest monument is a sixty-foot granite obelisk memorial to the Confederate Dead. Erected by the ALMA, the foundation of Stone Mountain granite was laid in 1870, on the day of the funeral of Robert. E. Lee. The monument wasn’t completed and dedicated until Confederate Memorial Day, on April 26, 1874.
Flanking the obelisk to the northeast, the Lion of Atlanta monument commemorates unknown Confederate soldiers who died in the Battle of Atlanta. The large sculpture carved in marble from Tate, Georgia was commissioned by ALMA and unveiled in 1894. With the famous Lion of Lucerne as his model, T.M. Brady depicted a weeping lion, representing courage, dying on a Confederate flag. 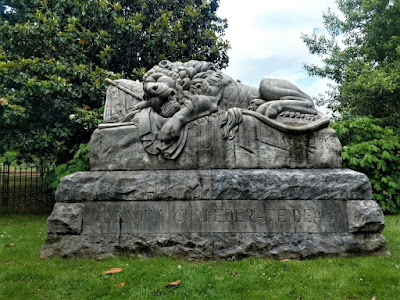 (Jumping ahead to 2020... Sadly, political and civil unrest has led to vandalism of this nearly 130 year old memorial. On the nights of May 28, May 31, June 5, and June 6, 2020, members of BLM and Antifa went into Oakland Cemetery and vandalized the Lion statue, the Obelisk, some of the headstones, and one of the historical markers within the Confederate Burial Grounds. The geocache has been archived.) 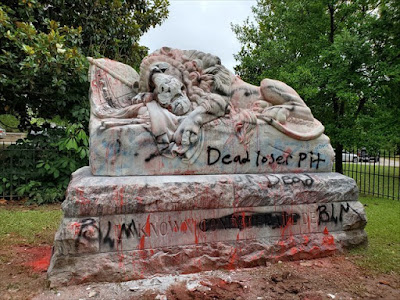 The monument at the Neal family plot is one of the most beautiful in Oakland Cemetery. Mary Elizabeth (Lizzie) Neal was the daughter of Thomas Neal and Mary (Mollie) Cash. Before moving to Georgia from Louisiana three years earlier, she lost six siblings. She suffered from rheumatism for several months before her death. Her sister, Emma, cancelled a trip to the Arctic to care for her Lizzie in the last days of her life. Created by her father after her and her mother's deaths, Lizzie is thought to be represented by the woman on the right of the monument. 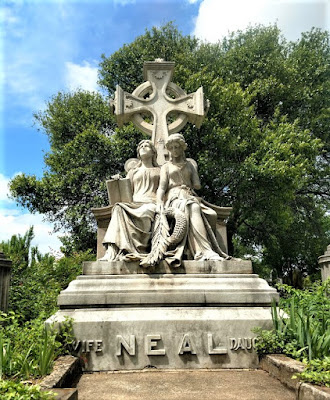 Three more interments here worth mentioning. Joseph Jacobs (1859-1929) was a businessman and pharmacist. While it was John Pemberton who invented Coca-Cola in 1885, it was Joseph Jacobs that introduced it to the public on May 8, 1886.
Also, there's Margaret Mitchell (1900-1949), author of the book "Gone With the Wind." On August 11, 1949, she was hit by a drunk driver while crossing the road at Peachtree and 13th with her husband on the way to see a movie. She died eight days later.
Finally, and jumping again forward to 2020, singer, songwriter, and actor Kenny Rogers was laid to rest in Oakland Cemetery on March 20, 2020.
All in all there are estimated to be about 70,000 interments here. I spent almost two hours exploring this cemetery and didn't get see it all. But I do need to get back on the road. It's late in the afternoon and I still have ground to cover. So let's get moving.
The next six geocaching stops were quick roadside or parking lot caches to get six new counties in Rockdale County (GC5GT56), Newton County (GC84173), Walton County (GC2X92M), Greene County (GC1AFQN), Taliaferro County (GC19WT6), and Warren County (GC1DZ99). Along the way traveling down these backroads, you often see houses or buildings that have long been abandoned and nature is consuming them. If you're anything like me you begin to wonder what they once were and what happened that allowed them to get to this condition. 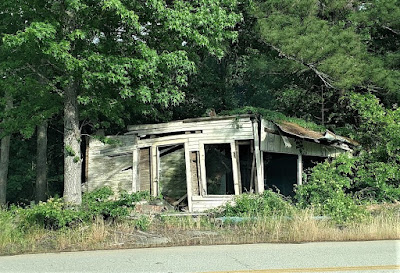 Continuing over into McDuffie County we stop for some history. "The Rock House" (GC21JD6) is an 18th Century stone dwelling and is the only surviving house associated with the Colonial Wrightsboro Settlement (1768). Its builder, Thomas Ansley, used weathered granite, quarried in its natural form from the nearby geographic fall line, as building material. The granite, along with pine timbers and cypress shingles, gave the house a distinctive Georgia character. The architectural style of the Rock House is similar to stone houses in the Delaware Valley of New Jersey from which Ansley migrated. It is the earliest dwelling in Georgia with its original architectural form intact.
The home is now owned by the Wrightsboro Quaker Foundation and has been rumored to be haunted. The Augusta Paranormal Society visits this location from time to time. 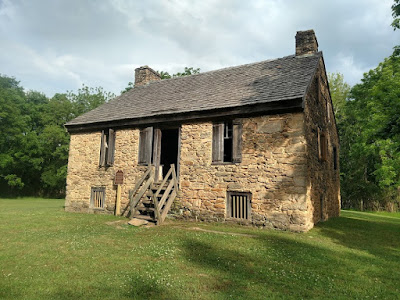 Across the street is a large monument erected in 2002 among many small crosses. "The great tornado (Type 5) entered McDuffie County at RR Mile Post 42. At 12:45 PM, March 20, 1875 the Rock House lost windows, a cook house, corncrib and gin. In the center of the cemetery a giant oak was blown down. This marker was in the center of the tornados path." There are 18 names with dates listed of those who are believed to be buried there. The dates range from 1809 through 1848.
Continuing to research the history of the Ansley Family, the last name was Anne Ansley (born 1801 - died 1848) was the daughter of Abel and Lydia Ansley. Before she died, she married Willey Carter and they had eleven children. One of those eleven children was Littleberry Walker Carter, who eventually became the Great-Grandfather of President James Earl "Jimmy" Carter, Jr. 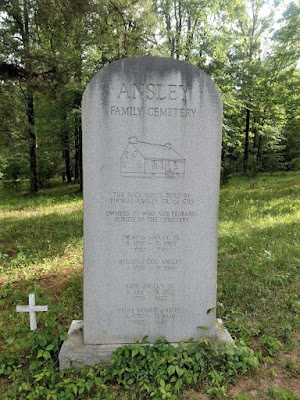 Crossing the Savanah River over into South Carolina, I stop at the Welcome Center for a quick geocache for Aiken County (GC1048M). Then take the first exit and drive north a couple miles for another quick roadside geocache to pick off Edgefield County (GC81EPX).
For Lexington County (GC4N3FV) it was "The Duck Inn Travel Bug Motel." A creative geocache container large enough to hold plenty of travel bugs and coins to move up and down the Interstate. And finally the last geocache of the day was in Richland County (GC4GX30). 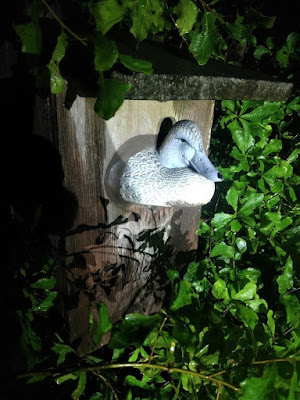 Another long day of driving and geocaching. I continued to the town of Lugoff, SC where the next geocache is located. But instead of finding the cache, I check into a hotel. It's after 9 PM and I'm tired! Not a bad day though, picking up a lot of new counties and finding some historical places. I appreciate you riding shotgun and hope you enjoyed the roadtrip. We got one more day tomorrow to get to North Carolina. Until then, it's sleep time.
Posted by Mark at 5:19 AM