Beyond the Alamo, Exploring the Other Four Historic Spanish Missions in San Antonio Texas

Hello friends, travelers, explorers, and geocachers. Welcome back to AwayWeGo's Geocaching Adventures blog. For today's roadtrip, we are going back to San Antonio for a trip back into early Spanish history in North America.
Let's start with a little background. Between 1528 and 1535, Spain sent Álvar Núñez Cabeza de Vaca across the land eventually known as Texas to explore and further claim the region as Spanish Territory. Over the later years, the focus was more to the south. Then in the 1680's with the French starting to intrude from their territory to the east, Spain once again initiated explorers into Texas. In 1686, Alonzo de León led the first land expedition or entrada seeking to expel the French from their colony at Fort St. Louis.
During his fifth expedition in 1690, de León and his chaplain, Fray Damián Mazanet, founded the first Spanish mission in Texas along the Neches River in east Texas. Their successful expedition along the Camino Real Trail created the emergence of San Antonio as a stop for travelers in route from Mexico to East Texas. The first governor of the Province of Tejas, Domingo Terán de los Ríos, undertook another entrada. The Spanish government authorized additional missions among the East Texas Indians. Governor Terán was accompanied by Fray Mazanet and followed the same route as de León before veering further north and passing through the vicinity of present day San Antonio. The two men were the first to visit and name the location. 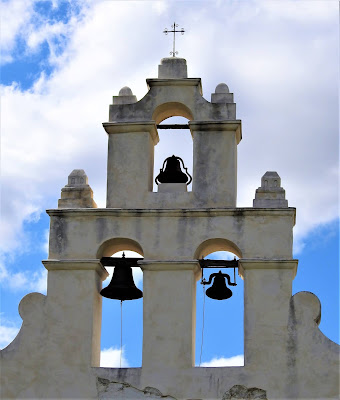 Under direction of a new governor, Martín de Alarcón in 1718, a new entrada specifically to establish a mission and presidio on the San Antonio River and to deliver supplies to the missions in east Texas began. Because of its location halfway between Spain’s missions and settlements along the Rio Grande River and in East Texas along the French Territory, San Antonio became an important outpost.
The first and most popular of these is the Mission San Antonio de Valero (Alamo) founded in 1718 by Fray Antonio de Olivares. The mission was originally established along the banks of San Pedro Creek but was soon relocated to the east bank of the San Antonio River. After a hurricane destroyed the complex in 1724, it was relocated to its current and final location. Construction began on a stone church in 1744 but it collapsed before it could be finished. Work on a third church, the one that exists today, began around 1756.
Now we all "Remember the Alamo" and its role in the Texas War of Independence. Today it receives more than 2 1/2 million tourists a year visiting from around the world. Many of those also visiting the San Antonio Riverwalk and its many shops and restaurants between The Alamo and the 1730's San Fernando Cathedral Catholic Church. You can read more about our visit to these sites in a previous blog here.
Now we get to the main reason of todays return trip to San Antonio. Most tourists don't even realize that there are a total of five Spanish missions in San Antonio just a few miles apart. There is a walking / biking trail to connect them to the main Riverwalk. However, we decided to drive between them. 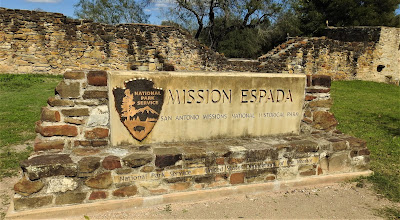 Our first stop was at the Mission San Francisco de la Espada. Originally established in 1690 in East Texas, it is one of three missions relocated to San Antonio in 1731. Since water was vital to the mission and survival of the community, the Franciscan Missionaries and their Indian followers built a dam, irrigation ditch, and aqueduct from 1740 to 1745, after laying the foundations of the mission but before the construction of permanent buildings on site. 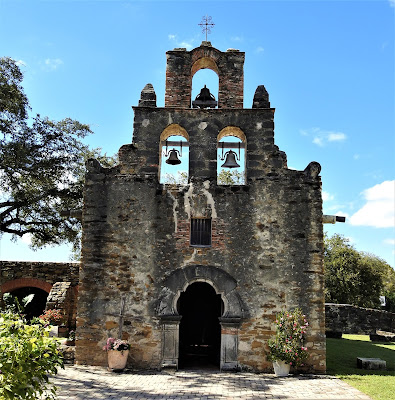 The vast walled complex consisted of the church building, the two-story priests quarters, workshops, storage facility, a friary, and Indian quarters surrounding an open courtyard. The stone rooms which served as the Indian housing were built along inside the fortified wall. By 1762 three sides were lined with these houses. 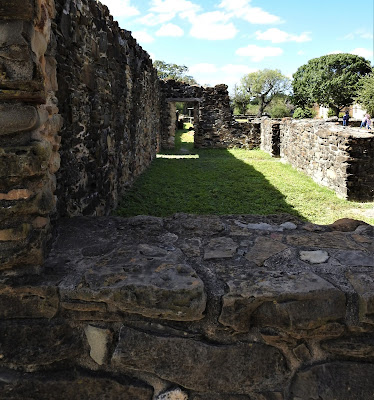 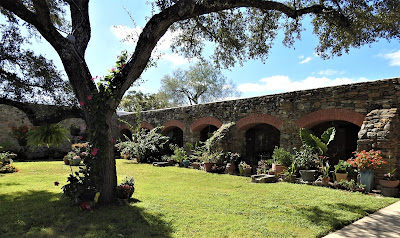 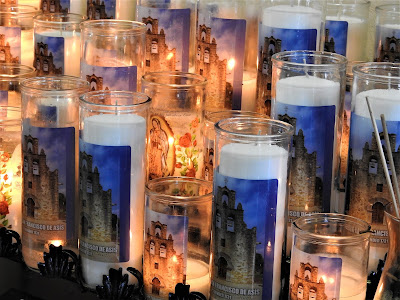 Then we drove over to the Mission San Juan Capistrano. Like Mission Espada, it was also relocated to San Antonio in 1731. In addition to its early history, the mission compound itself was constructed in a similar form, including a church and plaza surrounded by a defensive wall formed from stone Indian quarters. By 1756, the mission’s first church was completed in addition to a convent building and a stone granary. 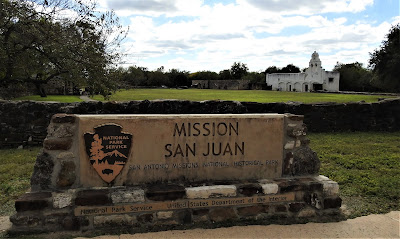 By 1762, a second church building was under construction, though the Native American converts were still living in temporary jacal type housing. Mission San Juan was never as successful as its counterparts. One reason was that the Spanish government did not allot the mission sufficient lands to cultivate food and to engage in ranching activities. The mission was also subject to repeated Apache raids, which reportedly occurred more frequently there than at other missions. 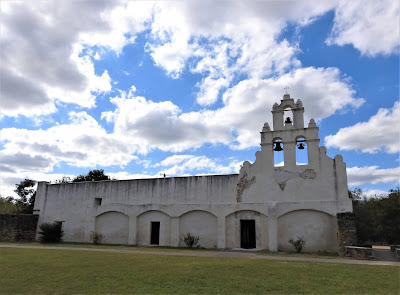 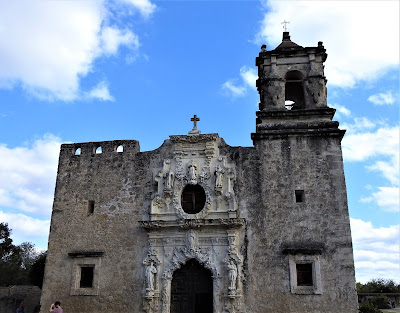 Approximately 240 Native individuals were assigned to the mission upon its commission, but a deadly epidemic dramatically reduced the Indian population to 41 by 1739. Many different groups of Native Americans who belonged to different bands and who would have self-identified by different names settled at the mission during the eighteenth century. The Native American residents of the mission were the predominant labor source utilized in the construction of structures in the complex and were also tasked with preparing the land for agriculture and constructing the associated system of irrigation canals known as acequias. 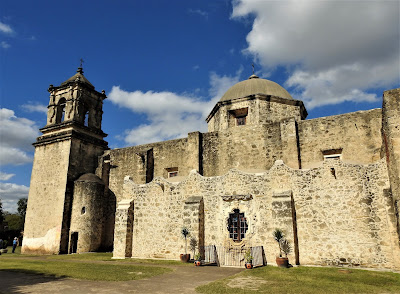 The mission was originally founded on the east bank of the San Antonio River south of the Alamo; however, it was relocated three times. It was moved to its current location on the west side of the river some time prior to 1730. Many of the structures on site prior to the 1760's were temporary in nature. 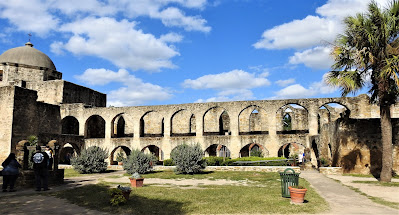 As seen in the scale model below, which Candy is taking a photo of, you can see how the mission was enclosed behind stone walls to defend the residents from attack by hostile native groups unaffiliated with the mission. Like the others, the mission compound also included a stone friary, a granary, gristmill, and various artisan workshops, including a carpentry shop, blacksmith shop, and weaving workshop. The complex also included Indian quarters that were primarily located along the compound’s walls. These dwellings were simple limestone structures with one main room and a kitchen. 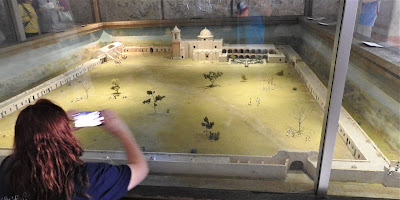 Finally we arrived at Mission Nuestra Señora de la Purísma Concepción de Acuña (Mission Concepción). This Mission also had a virtual geocache as well (GC4083). Located approximately three miles south of downtown San Antonio. Another mission relocated from East Texas to San Antonio in 1731. The location was selected based on its proximity to the San Antonio River, which allowed for irrigated agriculture, and for its location near the presidio at San Antonio, which offered military protection to the mission occupants. Upon the mission’s foundation, approximately 300 Native Americans were settled on its grant. Construction of the main church building took around twenty years. It was finished in 1755. 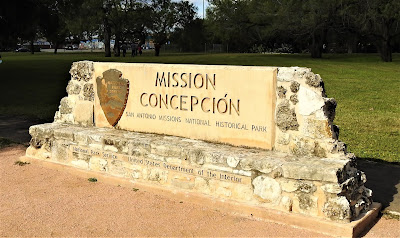 The mission was a self-sufficient, self-contained village surrounded by irrigated agricultural lands. The mission faced challenges from its establishment. Many of the converts died of disease, and the facility was regularly threatened with attack by hostile Native American groups unaffiliated with the mission. Mission records from 1762 indicate that church officials had baptized 792 Native Americans and buried 596 in the same year. Twenty years later, there were only 77 Native Americans residing at the mission. 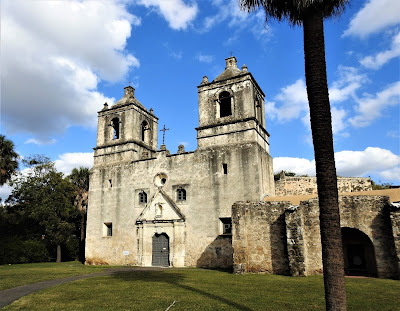 Due to the church’s lack of success in achieving their mission and other political factors, the mission was secularized in 1794. At that time, there were only 38 Native Americans residing there, and the Spanish government divided the mission’s agricultural land between them. After secularization, the mission compound was abandoned and quickly fell into a state of disrepair. An 1821 description of the property indicates many of the buildings were in ruins and that the acequia system was no longer functioning. As late as 1854, cattle were housed in the church. By the late nineteenth century, concrete steps to preserve the property had been taken. It was first rededicated as a church in 1861 after restoration by the Brothers of Mary. By 1913, the Catholic Church had initiated a number of restoration projects on the property. Further preservation efforts were under taken in the mid 20th century. 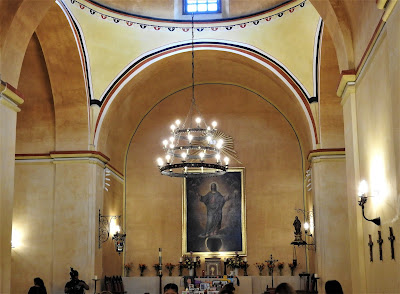 In 1978, the missions became part of the San Antonio Missions National Historic Park, and the National Park Service in 2002. In addition to the above ground structures, the mission is also significant archeologically. Archeological investigations on the property have uncovered evidence of the original convento as well as the original adobe church from circa 1745 and the location of the former Indian quarters. There is also archeological evidence of an earlier mission-related occupation in the area south of the mission walls. Archival evidence suggests this occupation site could represent the original location of Mission San José or of the elusive and short-lived Mission San Francisco Xavier de Najera.
So I hope you've enjoyed this tour of the San Antonio Missions. If you're ever in San Antonio "Remembering the Alamo," please remember the other four as well. Besides they are WAYYY less crowded!
There are new ways to follow me. Follow the blog directly by using buttons on the right of your computer screen. Or through various social media platforms:  Facebook, MeWe, Parler, Gab, Twitter, Instagram, MAGAbook, and Reddit. Follow us on any or all of these platforms and whichever you choose, please leave your comments. We'd love to hear from you and it encourages us to continue sharing our adventures.
Posted by Mark at 6:15 AM