Well it's that time again. I finished up on the wind farm down in South Texas and have to be in North Carolina on Monday to start a solar project. So another roadtrip is ahead of me. Supposed to be 2-3 months there in NC. Unfortunately the wife will still be here in Texas working. But hopefully the time will pass quickly and the next project will be back in Texas. But for now, lets hit the road and see what kinda cool places we can find. 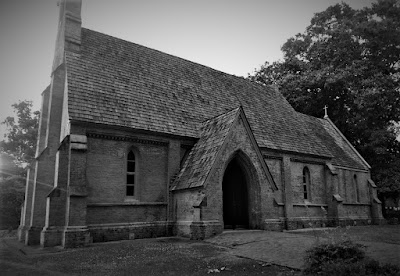 My first stop, after Duncan Donuts for iced coffee and a bagel of course, was just outside of Waco, Texas. "Sleepy Hollow" (GC3D0BB) was a cemetery and the location of a geocache. Unlike the typical cemeteries I visit, this one is a pet cemetery! I think I've only encountered maybe one or two pet cemeteries before. This one had a doghouse and a fire hydrant as headstones. One thing I didn't see were any zombie cats or dogs that have been resurrected! 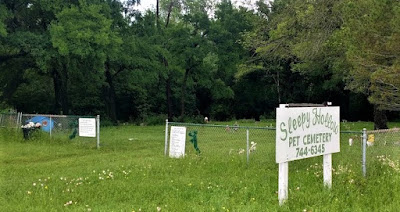 Also a little further east outside of Waco was the "Shootout at the Double EE" (GCGM3X) Ranch Road is a virtual geocache. On April 19, 1993, the FBI and ATF raided the compound of the Branch Davidian Church. After 100 canisters of tear gas being deployed over a 6 hour period, a fire broke out and the compound was engulfed in flames. David Koresh and 75 of his followers, including 25 children, perished in the blaze. Only nine managed to escape. The church has since been rebuilt. 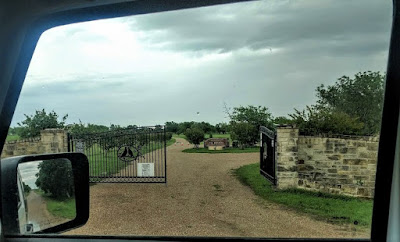 My next two geocaches are in Corsicana, Texas at the Oakwood Cemetery (GC3EXG7, GC4G8EJ). There are nearly 14,000 burials dating back to 1833. There are several historical markers throughout the cemetery as well. One of the caches highlights a native of Huntsville, Texas, Samuel R. Frost grew up in Navarro County and in 1863 enlisted in the Confederate army. After the Civil War, he studied law and was admitted to the bar in 1870. In the years that followed, Frost served as Navarro County attorney, county judge, district judge, and state legislator. He and his wife, Mary (Winkler), were the parents of nine children. The town of Frost (20 mi. W) was named in his honor.
Another interment, and a more recent one, is Aaron Dale Allston (1960-2014). He is the author of 13 Star Wars novels as well as many other science fiction, game based fiction and mystery novels, short stories and technical guides for writers.
But the one historical marker that caught my attention was by the grave of David Reed Mitchell. Like myself, he was also a surveyor. From the historical marker: "Born in 1797 in North Carolina, arrived in Robertson County, Texas in 1845. He was a surveyor by trade, and had surveyed the upper Trinity and Brazos river areas in 1844. He became surveyor of the Robertson County land district, as well as the original land of Navarro County and Corsicana.
Mitchell was also a land speculator of sorts, and by 1847 he owned a large amount of land in Navarro County. With two partners, Thomas I. Smith and James C. Neill, he donated one hundred acres on which the town of Corsicana was founded. For a time he operated an inn in the town, sometimes referred to as the "lower hotel" because of its location in proximity to another hotel run by pioneer Hampton McKinney.
David Reed Mitchell married Mary Ann Higgins, and they were the parents of five children. Mitchell continued to live in Corsicana until his death on Oct. 7, 1853. He was buried in Oakwood Cemetery, and the citizens of Corsicana erected a monument at his grave in 1899. Of the three partners who donated land for the city of Corsicana, Mitchell is the only one buried here." 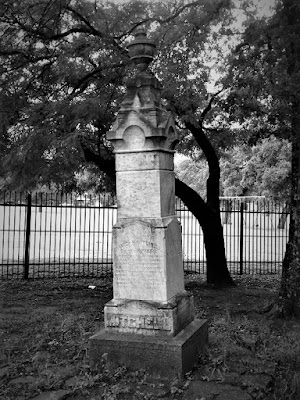 Before leaving Corsicana, I had to stop and get one more geocache here. "The Fruitcake Factory" (GCF11B) is located at the Collin Street Bakery. Yes, that dreaded fruitcake that usually makes an appearance around the Christmas holidays. The Collin Street Bakery is the largest producer of fruitcake in the world. They have been baking since 1896 and are shipping to almost 200 countries around the globe. 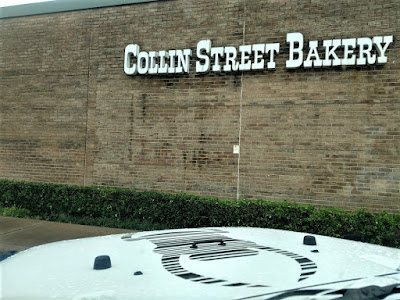 Another goal of this roadtrip is to pickup new geocaching counties. I've already completed my Texas counties. Now that I've crossed over into Louisiana it's time to pick off a few more of those. Bienville Parish was the first one with a quick roadside park and grab geocache (GC5BQVX).
My next geocache and county was in Quachta Parish in the town of Calhoun. "Breaker 19" (GC1V79Q) was a creative cache at a CB shop. I posted a photo below and also my first attempt at bringing you a video. Hopefully it works. 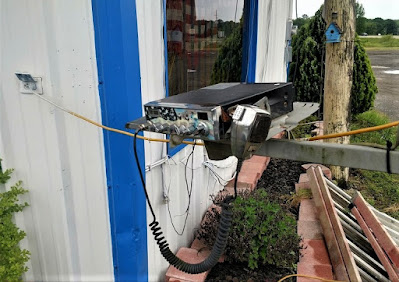 Just up the street in Calhoun was the Mount Zion Cemetery. There wasn't a geocache there, but it's still hard to pass up an old cemetery. There are over 500 interments that date all the way back to 1852 belonging to an eight year old boy named Robert Simmons Gaston who died in 1852 while visiting this country with his mother. 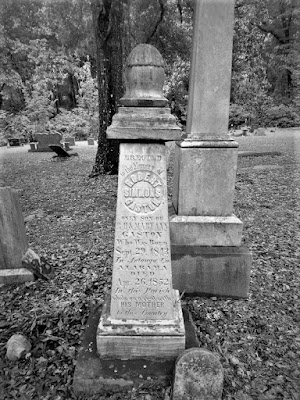 Located in Richland Parish, Holly Ridge was established in the early 1900's as a sawmill town in the middle of a large farming area. The company started with making barrel heads and later changed to the lumber industry. The company that owned all the timber land was Chess and Wymond out of New York state. Mr. Franklin leased all the land and cut all the timber. After the timber was gone it became a large farming area owned by the Franklin family. A quick roadside geocache (GC29MH5) in Holly Ridge off of I-20 to claim that county. Some dark clouds overhead isn't very promising though. I did get some heavy rain along the Louisiana / Mississippi state line. 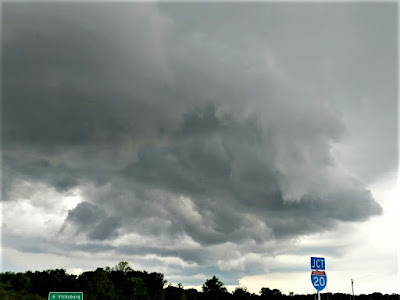 After the rain and crossing over into the state of Mississippi, I jump off of I-20 and drive up into Madison County and the town of Annandale. There I find my next virtual geocache at the Chapel of the Cross (GC29MH5). After John and Margaret Johnstone arrived in Mississippi from North Carolina in 1840, they lost two of their sons that same year and buried them on their land, which would become the Annandale Plantation. John had the idea to build the chapel but died in 1848 before he accomplished it. The Gothic Revival chapel was erected in the 1850's by his wife Margaret L. Johnstone as a memorial to her husband. 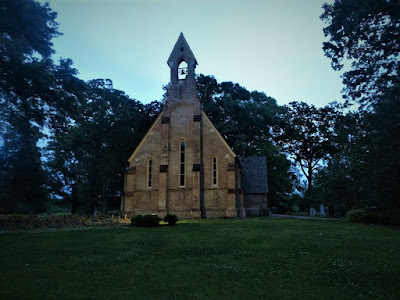 Behind the chapel is the cemetery which now contain over 250 interments, the oldest being the two sons from 1840. The geocache page mentions one grave in particular as a question from which you need to answer in order to claim credit for the virtual geocache. But it doesn't give you the history of the grave. Henry Grey Vick was killed in a duel at age 23, just days before he was to marry Helen Johnstone, the daughter of John and Margaret. Helen was said to have worn her wedding dress to Henry's funeral. And legend has it that the "Bride of Annandale" continued to love Henry the rest of her life, even after marrying George Harris, and that her ghost is often seen sitting on a bench near Henry's grave. 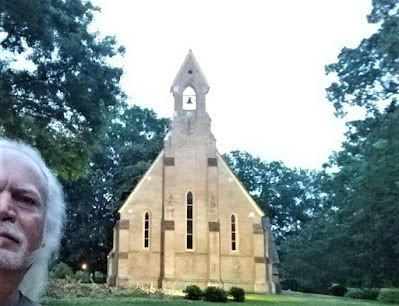 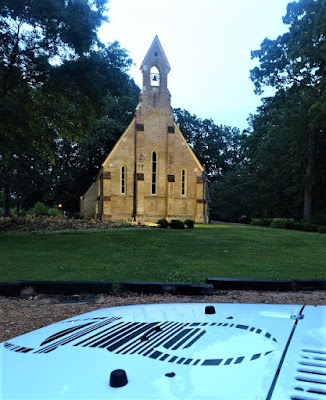 Now that the sun is down and it's dark out, my plan is to keep going as long as I can find the geocaches. If I can't find a cache and need the county, then it's time to find a hotel and wait for daylight.
But next up is another virtual cache in Canton, MS. "Casey's Intended Destination" (GCF5FE) was located at the old train depot, now a museum. Canton was the destination of the famous train engineer John Luther "Casey" Jones when his train derailed after colliding with a stalled freight train 15 miles up track. He was traveling at about 75 MPH when he noticed the broken down train cars still on the track about 300 feet ahead near a side track switch.
While he could have jumped off the engine to save his live, as did the fireman on board, he stayed with the engine pulling on the brake and reversing throttle to protect those on the ground and passengers of the other train. He managed to slow down to approximately 35 MPH before colliding with the caboose and 3 of the freight cars when his train derailed. He died upon impact and time was recorded at 3:52 AM by his cracked watch.
I would liked to have gotten some more photos of the outside and down the side with the tracks in view. It was lit up enough. But there were some shady characters hanging out across the tracks on this Friday night. So a quick photo of what I needed for answers and moved on. (answer covered) 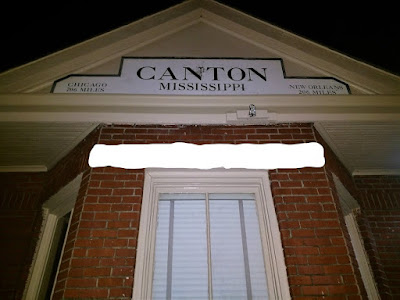 From here to the Alabama state line, I found several quick parking lot geocaches in Leake County (GC3CMVJ), Neshoba County (GCV8ZT), and Kemper County (GC7KCNW). Then I continued over into Alabama where I already had the next  few counties. Getting close to midnight I found a hotel in Birmingham for the night.
A long drive today, but I did get to pick up some new counties and see some great places. I especially like that old chapel in Mississippi and wish I got there just a little earlier to get some better photos.
Anyway, tomorrow is another day and another adventure. Do I make it all the way to NC or stop short. Guess you'll have to come back to find out. See you next time...
Posted by Mark at 5:32 PM