"OK campers, rise and shine, and don't forget your booties because it's COOOLD out there!" (a little Groundhog Day humor there) Are you ready for day two of our road trip? The temperature is a whopping 1 DEGREE outside this morning with fresh snow on the ground! CLFM and I were up and out at sunrise ready hit the road. Well he more than I since I'm still dealing with a pinched nerve in my lower back and not much sleep because of it. 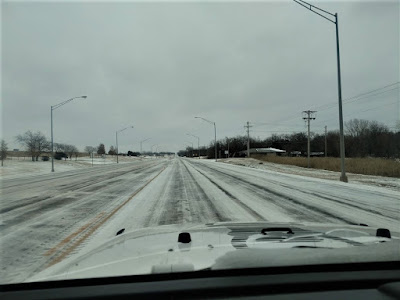 In case you missed Day One of our roadtrip, you can catch up here. We begin today still in Oklahoma. In the town of Perry to be exact. First geocache on the agenda is another one of those puzzle caches that I'm clueless about. But CLFM solved it and we make the find for "Wrestling Park" (GC73VWX). I think we were the first ones downtown this early Sunday morning and I felt kinda bad putting the first set of tire tracks through the fresh snow cover. 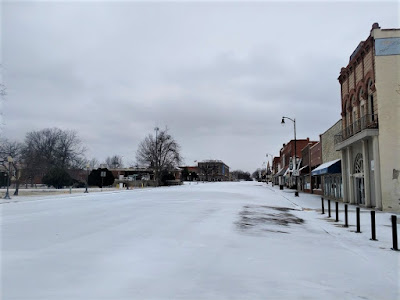 Now back to I-35 northbound only to exit back off a few miles up the road for a virtual cache drive-by. "Keep a Truckin" (GC4B0F) is a very unique roadside attraction and billboard for a trucking supply company. What I didn't realize until now was that I had seen this truck several times before passing through while I was a trucker myself from 2007-2010. I started geocaching back in 2006 and don't know why I never logged this virtual geocache as a find before. 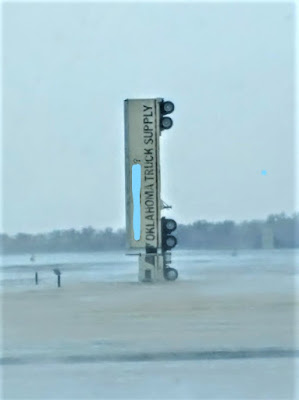 Well we finally made it to Kansas! And after a stop at Walgreens to pickup some Aleve, my back is starting to feel a little better. Not much, but a little bit.
First on the list in Kansas is another quick drive-by virtual geocache at the Mulvane Historical Museum (GC66E3). We found the caboose with the required answer (which I have blocked out), snap a photo, and on to the next one. 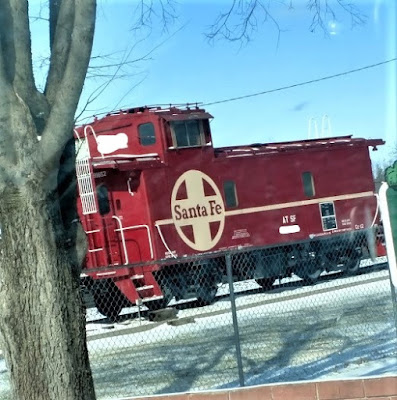 Now one of the great things about geocaching and driving the back roads is that you never know what you might run across. This next one was NOT on our planned to-do list. We were driving down this back country road outside of Derby, Kansas on the way to grab another virtual. I spotted this metal sculpture, yard art of a bull mounted on 4-wheels, sitting atop a fence. It gave us a chuckle and I just had to make a u-turn for a photo. And wouldn't you know there was also a geocache there too (GC2RQM2). Sorry for the bad photo. This was taken through the window while CLFM was getting the cache. 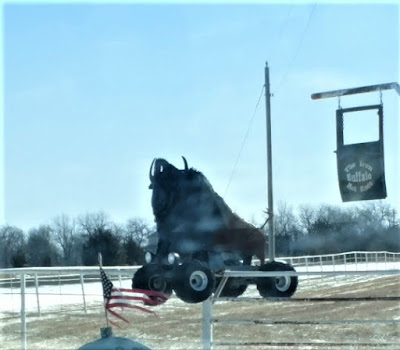 So that virtual geocache we were headed to turned out to be some more yard art metal sculptures. "Jurassic Art" (GCB0CA) was probably the largest collection and best displayed yard art I've seen. Not pictured was a life size knight in shining armor with sword drawn fighting an even bigger winged dragon. But my favorite was the parade of ghost riders on Harley's! 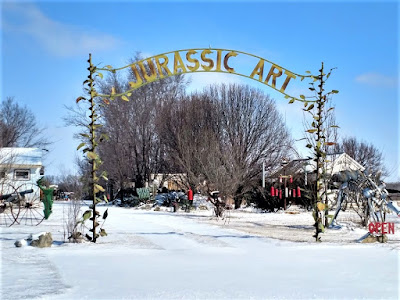 Our next stop getting closer to Wichita, Kansas was an Earthcache at the Butler Artesian Well, a natural spring water well (GC1RY3Z). Although with the single digit temperatures and all the snow on the ground, there wasn't much to see.
Next up is a string of virtual geocaches in and around Wichita. "Hold the Anchovies" (GC85C9) is the beginning of one of the largest pizza chains in the country. This little brick building on the campus of Wichita State University is the very first Pizza Hut location. 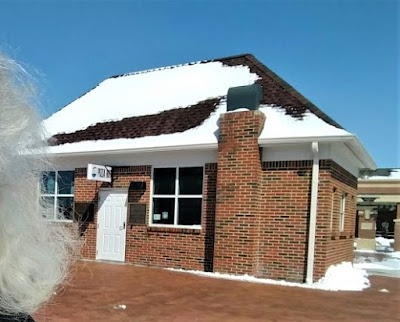 And then there was this unique statue (GC7B63). There's no plaque or historical marker placed there to tell the story. But it goes along with what the soda counter represent. You can read the entire story at the geocaching page. In summary, on July 19, 1958 at the Dockum Drug Store sit-in was one of the first organized lunch counter sit-ins to protest segregation. 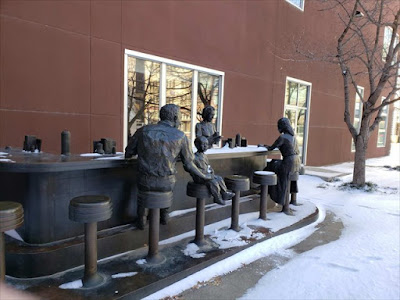 The Chisolm Trail was a trail used after the Civil War to drive cattle from Texas up to the Kansas rail yards heading east. The next virtual geocache is for a monument (GC9F39) that reminds us of the history of Wichita and those dangerous cattle drives.
And last but not least was the Lonely Steer (GCB06A). A statue of a Texas longhorn bull, just one of two original bull statues built in the 1970's. They were separated a few years back because of some construction and this one ended up out front of the high school as its mascot.
Back on the Interstate 35 northbound, we stopped at a rest area for some gas, coffee, and a cache for Chase County (GC5QCMP). Then a quick stop for a cache in Lyon County (GC28NF4).
In Topeka, this next one was another virtual geocache (GCB30E). Can't show you the photos because they give the answers. But I will describe it from the CO's perspective. He's an Iraq War Veteran. "The aircraft in question has quite the history. It does not list the accomplishments it has endured but it holds 14 world records in various areas such as longest endurance flight and highest altitude. I am a member of one of the units that used to fly one of these very dependable and durable aircraft. We now use a more advanced aircraft that has more room and greater speeds as well as being more mission capable. If you stay long enough, you may see us up flying around."
Also in Topeka was the "Gone But Not Forgotten" virtual geocache (GCG3ZN). This memorial was dedicated to those who served and gave their lives during the Vietnam War. 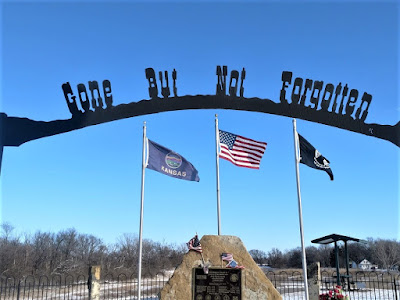 Our last two geocaches in Kansas were in Atchison, both virtuals, and both in the same neighborhood! One at the birthplace of Amelia Earhart (GCBA15). She was a pioneer in aviation and the first woman to fly solo across the Atlantic Ocean. She went missing trying to cross the Pacific and was never seen again. 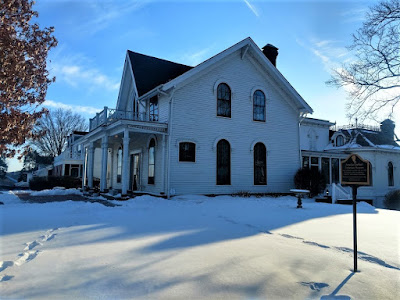 The other house in the 'hood was the "Sallie House" (GC7B8Z7). The most haunted house in Kansas's most haunted town is none other that The Sallie House. The home earned its nickname after a 6-year-old died in the home during a failed appendicitis surgery in the early 1900's. Then it gained notoriety in the 1990's, when a couple renting the home reported harmless pranks being played on them, which eventually turned malicious and violent. After consulting a psychic, it was discovered that Sallie wasn't the only ghost haunting the home, but a middle-aged woman as well.
One more geocache today at the "Loess Is More" Earthcache (GC64KXZ) in Rock Port, Missouri. It was a long day, a long drive, freezing cold, and my back was still hurting. But we did find 18 caches for the day and saw a lot of history. We ended in Omaha, Nebraska for the night. And we start right there first thing in the morning. See you then.
Posted by Mark at 5:30 AM