2019-03-09: A Packed Geocaching Roadtrip Returning from Minnesota to Texas: Day 3 in Kansas and Oklahoma

Hello again and welcome to Day 3 of the roadtrip returning from a business meeting in Minnesota and driving back to Texas. CuteLittleFuzzyMonkey (CLFM) and I took three days driving from TX to MN. Do we make it back to Texas today? Let's get going and see...
We left Manhattan, Kansas at sunrise and headed east on US-24 down the road into Wamego, KS. The town of Wamego is the birthplace of Walter P. Chrysler. You'll also find the Columbian Theater where you can see turn-of-the-century murals from the 1893 Chicago Worlds Fair. Probably the most popular attraction is the OZ Museum and all the Toto statues around town. 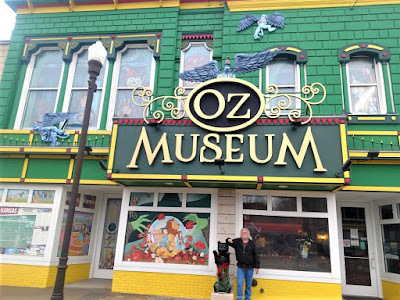 But what CLFM and I came for was our first geocache, a webcam geocache (GCPGXD). There were several webcams around town. We took our pose in front of the United Methodist Church. 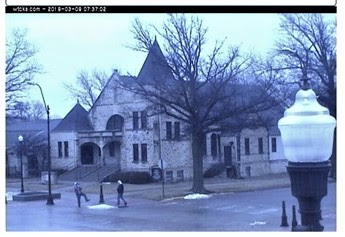 Our final stop before leaving town was the Old Dutch Mill (GC83C3) virtual cache. Built in 1879 by Dutch immigrant John B. Schonhoff on his farm twelve miles north of Wamego, this old mill was used to grind grain into flour and cornmeal. In 1925, thirty-five team and wagons moved the windmill to this site. Each stone was taken down, numbered, and rebuilt exactly as the original. A bust of Ceres, goddess of grain, is set above the window. The mill is 25 feet in diameter and forty feet high. 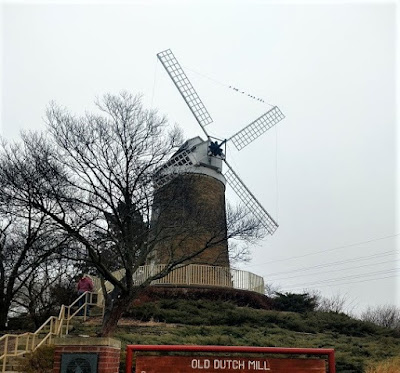 Then we backtracked a few miles to Manhattan, KS because we forgot about the virtual geocache at the Kansas State Vietnam Veterans Memorial (GC6887).
Heading south on Hwy 177 for a few miles, we arrived at Konza Prairie Research Nature Preserve. The Konza Prairie located in the Flint Hills and is managed by Kansas State University as a long term ecological research site. This vast ecological system provides some spectacular views as you arrive at the visitors center. This was once part of the 2923 acre Dewey Ranch and was purchased in sections by the Nature Conservancy and Kansas State University from 1971 to 1979 for a total of 8600 acres today. The Konza Prairie was named after the Konza Indians. It also offers a trail system that can be combined for a 6 mile loop.
There was a virtual geocache and an earthcache along the highway (GCB63B, GC1DJV8). Then there was another virtual geocache (GC6E84) on the westside of the preserve as well as another virtual "Ashland Community" (GC6E86) outside to the north. Looking at the satellite imagery, it looked like we should be able to drive around the outside and get both of those. We really weren't up for the 6 mile hike at this time. So we gave it a shot.
Getting to the Ashland Community was pretty easy and we parked right out front of the historical building. Then following Google Earth, we continued down the muddy road around and into the westside of the preserve. Drove right up to within a couple hundred feet of the old water well. Sure made it easier than a long hike. And with the muddy conditions, I got to put the GeoJeep in 4x4 mode again. 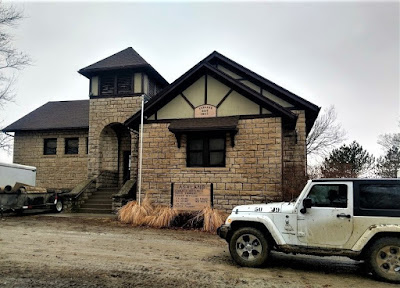 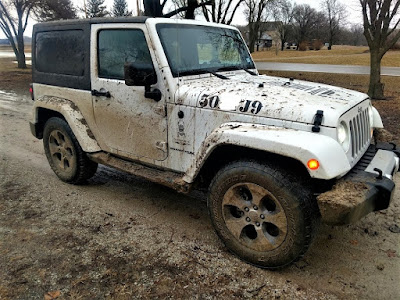 Now jumping onto I-70 west for a short trip to the hill overlooking Fort Riley. This virtual geocache brings us to an Atomic Cannon (GC698E). Now I've never even heard of an atomic cannon! This is why I love geocaching! According to the historical marker at the site of the cannon: "This is one of only three atomic cannons in existence. The other two are located at Ft. Sill, Oklahoma and the U.S. Army Ordinance Center in Aberdeen, Maryland. This cannon was placed in service on November 17, 1952 and was deactivated in August 1963. Two 375 HP engines were used to transport the 42-foot, 280-mm cannon at 35 M.P.H. to the desired firing locations. The cannon can fire a projectile 11 inches in diameter for more than 20 miles. This cannon was never fired."
From the parking area, you can see the barrel of the massive cannon pointing outward. Standing next to it, it's like the huge cannons on a Navy battleship. Looking back downhill, that's CLFM nearby, I-70 going left to right, Junction City to the far left, and Fort Riley way off in the distant right side. 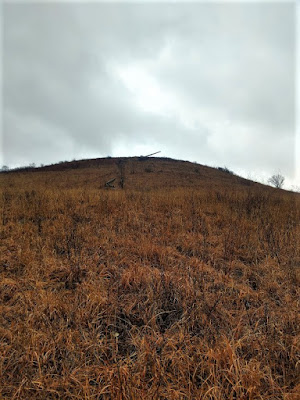 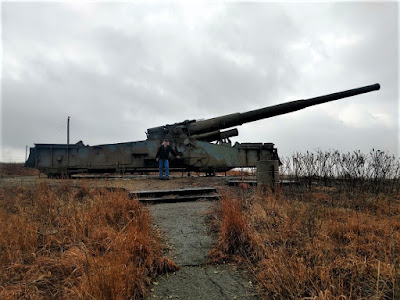 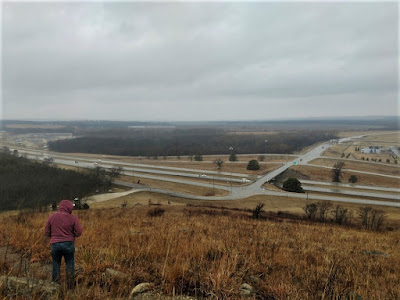 Driving on US-77 southbound in Herington, KS, we stop at the Father Padilla Memorial Park. There we find a not-as-big-cannon and our next virtual geocache (GCACE0). It seems like a pea shooter by comparison. 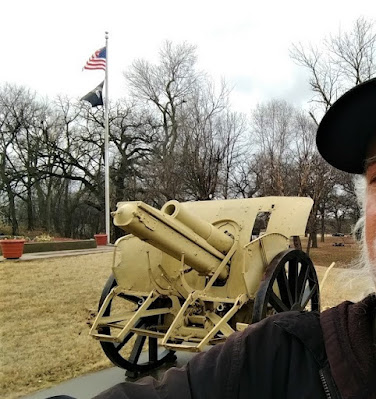 At the park across the street was this bench that was just calling out for me to take a photo! 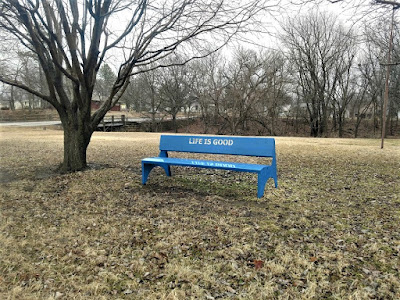 Back to I-70 westbound, we take a ride over to Abilene, Kansas. There we found a large boulder which marks the northern terminus of the Texas Cattle Trail (GCGA9K). The plaque gives a little history, including the following, over three million cattle were delivered here. The trail was in operation from 1867 to 1871. The dollars brought in by the cattle trade and those hustling the cowboys gave Abilene the foundation of prosperity that still carry it today. The wild wild west was definitely here! Gunfights in the street, fistfights in the saloons, and prostitutes working the cowboys made for many wild nights. The upper class citizens of Abilene desired a more reputable image and laws were passed here that brought the cattle trade to an end. The cattle drives moved west to cities like Ellsworth, Hays and Dodge. Abilene continued to prosper without the cattle trade and is still a successful community.
Also in Abilene, you'll find the Dwight D. Eisenhower Presidential Library and Museum. And of course it's also another virtual geocache (GCBB05). President Eisenhower was born in Texas and lived there until age 1 1/2. His parents then moved back to Abilene. There he grew up and remained until he joined the military. Even though after his military and political career he moved to Gettysburg, he always considered Abilene his hometown and where his Library and Museum was built. 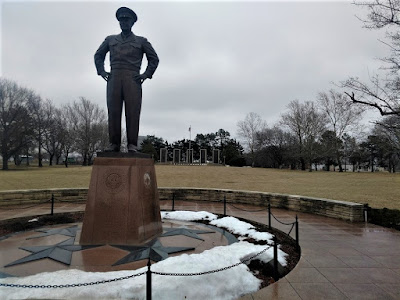 Next on our target list was a virtual geocache at the site of the Old Salina Brick and Tile Company (GC2E7C). We got the required bit of information needed for the answer and moved on.
Also located in Salina, Kansas is some aviation history (GC7B69P). In 1942 the Smoky Hill Army Airfield was constructed southwest of Salina. When the base closed in 1967 it left Salina with one of the largest Municipal Airport runways in the world. Turns out that wasn't the end of Salina's aviation story. For many years aircraft parts were built in several of the old base buildings by several familiar manufacturers. In more recent years it has become home to K-State Polytechnic with pilot programs in flight including a unmanned flight program. Military aircraft are still a common site at the airport with several reserve units having training facilities on the airport properties. 38 years after the closing of the military airfield a record breaking round the world flight took off (02/28/05) and landed (03/03/05) on the historic runway. The "Global Flyer" was quite an event and this monument is the centerpiece of a newly dedicated park with extensive history of the Airfield. 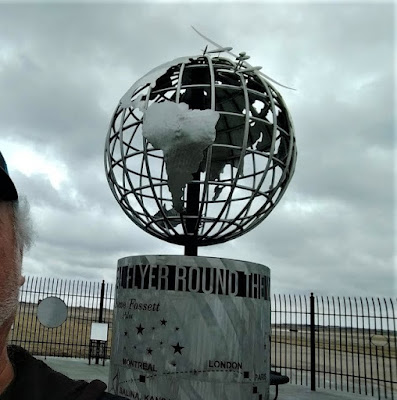 Heading south from Salina on I-135, we go down a short drive to Coronado Heights Park (GC3483). Located up on a hill overlooking Saline and McPherson Counties. Coronado Heights receives its name from Spanish Explorer Francisco Vasquez de Coronado who visited central Kansas in 1541. He was looking for the Native American community of Quivira where he was told "trees hung with golden bells, and pots and pans were beaten of gold." Coronado didn't find his gold.
In the 1930's, the Works Progress Administration built a picnic area and castle like building out of Dakota limestone. There was also a traditional geocache hidden a short walk down one of the trails (GC1TNG5). 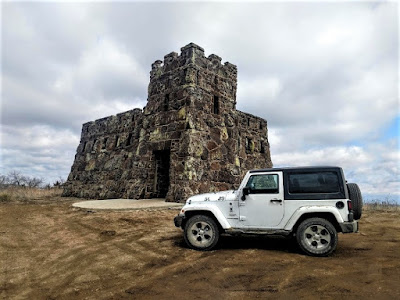 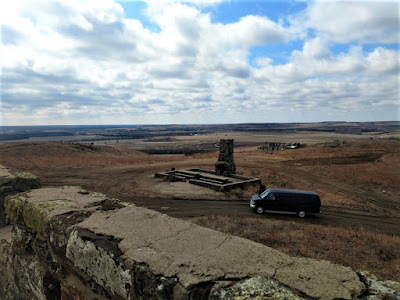 Continuing southbound on I-135, there's a roadside attraction photo opp and our next virtual geocache (GC348A). Though I don't know how I missed taking a photo myself. So I'll use CLFM's photo. This used to be the "Happy Chef" which stood outside the Happy Chef Restaurant in McPherson. Someone bought it and moved it here. Now it looks like Mr Moneybags from the Monopoly game. 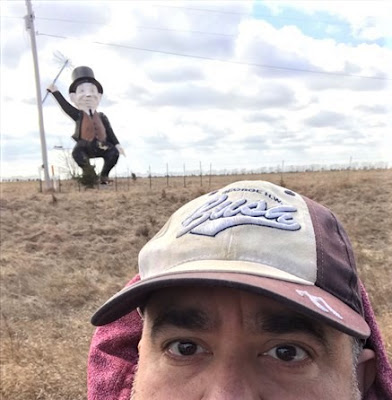 On the way to Canton to pay respects to Edgar Miller, we found two geocaches (GC824R0, GCG6V6) on the road to and in the cemetery. Edgar was an 18 year old ranch hand who bravely rode across the prairie to get help for his bosses wife who was very ill. He was captured by Cheyenne warriors who tortured, scalped, and murdered him, leaving his body in the weeds. For the complete riveting story, visit the Santa Fe Trail Research website. 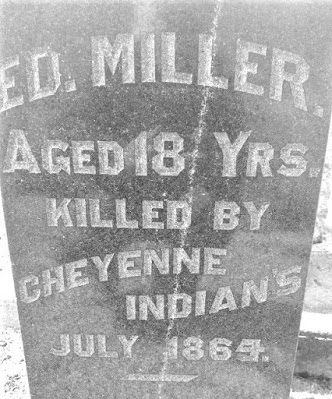 Then there's the "Nothing But Blue Sky" virtual geocache in Newton, KS (GCAE93). Located in Centennial Park is this huge piece of artwork sculpture created by three artists. 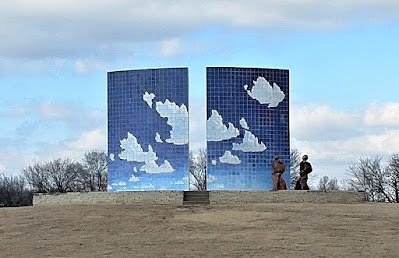 Finally making it down into Oklahoma, we make string of geocaching stops in cemeteries to claim new counties. One cemetery geocache in each county of Alfalfa (GC2BFZ3), Grant (GC3NNQM), Garfield (GC71GHP), Kingfisher (GCMJND), Blaine (GC4J0Y3), and Caddo (GC7KGVK).
By now it's getting late, already dark, but we're still going on. Also in Caddo County, in the town of Anadarko, OK, we stop by the former Rock Island Railroad Depot (GCGA01). Built in 1902, it is now a museum and a virtual geocache. The museum was closed at 9:30 PM while we were there, but I did manage to see the cool old fire truck parked out front. 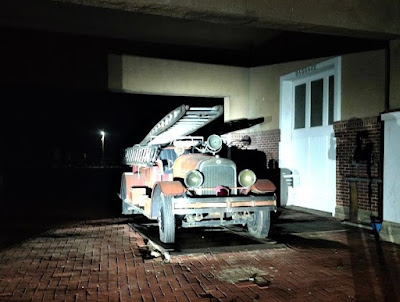 Moving down to Grady County, we get our last cache for the day. A virtual geocache for another one of those miniature Statue of Liberty monuments (GCFC05). 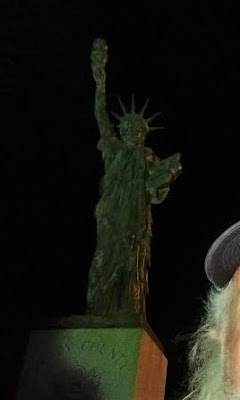 We finish the day near midnight finally getting some sleep down in Lawton, OK. Twenty-eight geocaches, about a dozen new counties, and nearly 18 hours later I'm exhausted! But it was a great day for geocaching and sightseeing through history.
Until tomorrow... ZZZzzzzz........
Posted by Mark at 10:13 AM