WOW, What a trip! This packed geocaching roadtrip from Texas to Minnesota began a week ago yesterday. Now I'm finally back home. But wait let me not jump ahead and leave out today. 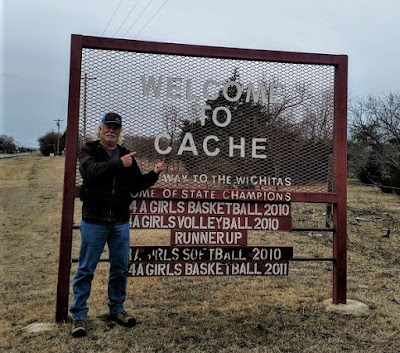 CuteLittleFuzzyMonkey (CLFM) and I started out early this morning in Lawton, Oklahoma. After breakfast and coffee, we drove over to the Fort Sill visitors center. Fort Sill was originally staked out January 8, 1869 by Maj Gen Phillip Sheridan to stop Indian Tribes from raiding border towns in Texas and Kansas. The garrison was originally called Camp Wichita and was referred to by the Indians as "the Soldier House at Medicine Bluffs." Sheridan later changed the name to Fort Sill in honor of his West Point classmate Brig Gen Joshua Sill, who died in the Civil War.
Today it is a U.S. Army Base covering almost 94,000 acres. It serves as home of the United States Army Field Artillery School as well as the Marine Corps' site for Field Artillery MOS school, the United States Army Air Defense Artillery School, the 31st Air Defense Artillery Brigade, and the 75th Field Artillery Brigade. Fort Sill is also one of the four locations for Army Basic Combat Training. It has played a significant role in every major American conflict since 1869.
Because CLFM has a military I.D., it was a little easier for the both of us to enter the base, as long as he was driving. So we swapped seats and now I was the navigator. Our first goal was to find the grave of a famous warrior.
Geronimo (1829 - 1909) was a prominent leader and medicine man from the Bedonkohe band of the Apache Tribe. From 1850 through 1886, Geronimo fought against Mexican and United States military campaigns in Northern Mexico's Chihuahua and Sonora and in the United States' New Mexico and Arizona.
In 1886, he "surrendered" for his third and last time. This last time he didn't break out. He was first sent to San Antonio, TX as a POW. Then transferred to Fort Pickens in Florida, Mt Vernon Barracks in Alabama, and finally Fort Sill, Oklahoma in 1894. With the exception of becoming an "attraction" in Pawnee Bill's Wild West Show around the country, Geronimo spent the remainder of his life farming with his family on land surrounding Fort Sill. He died of pneumonia on February 17, 1909 after being through from his horse and laying out in the cold overnight.
He is buried there at Fort Sill among the rest of his family and other Apache POW's. His gravesite is the virtual geocache we came looking for (GC3B0D). 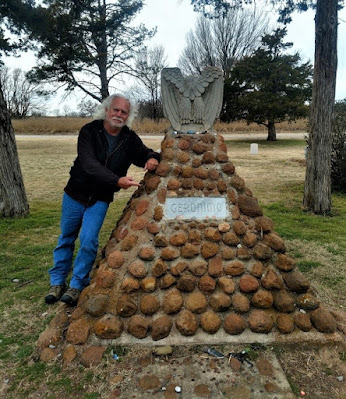 Also located within Fort Sill are our next two geocaches, a virtual (GCKPGE) and an earthcache (GC27G76). From the historical marker: "This Unique Landmark at the eastern end of the Wichita Mountains was noted, described, and explored by all early expeditions and was held in deep reverence by the Indian tribes of this area from time immemorial.
"The four contiguous porphyry bluffs form a picturesque a mile in length on the south side of Medicine Bluff Creek, a tributary of Cache Creek and Red River. It is evidently the result of an ancient cataclysm in which half of a rock dome was raised along a crack or fault. 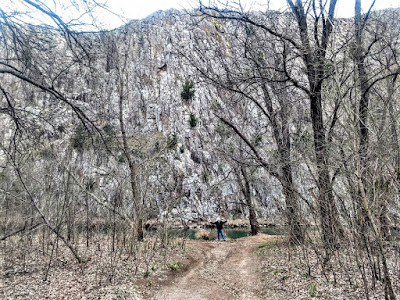 "When Fort Sill was established in 1869, the Indians named it “The Soldier House at Medicine Bluffs.” The site is rich in legends and history. You are facing the north side of bluff no. 3, which consists of a sheer cliff 310 feet high, rising abruptly from the creek. A rock cairn erected by medicine men on its summit was still standing when Fort Sill was founded. Here the sick were brought to be healed or disposed of by the Great Spirit, young braves fasted in lonely vigils seeking visions of the supernatural, and warriors presented their shields to the rising sun for power. Legends say that this was also a famous place for Indian suicides. The huge fissure between bluffs no. 2 and 3 was known as the “Medicine Man’s Walk.”" 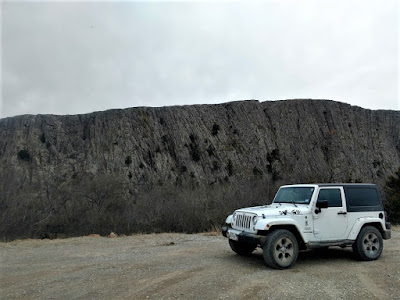 Leaving Fort Sill, we loop around over to the Wichita Mountains Wildlife Refuge. Established in 1901, the 59,020 acre refuge hosts a rare piece of the past - a remnant mixed grass prairie, an island where the natural grasslands escaped destruction because the rocks underfoot defeated the plow. The refuge provides habitat for large native grazing animals such as American bison, Rocky Mountain elk, and white-tailed deer. Texas longhorn cattle also share the refuge rangelands as a cultural and historical legacy species. More than 50 mammal, 240 bird, 64 reptile and amphibian, 36 fish, and 806 plant species thrive on this important refuge.
The Wichita Mountains Wildlife Refuge is also home to many virtual geocaches and earthcaches. We don't have the time to find all of them, but we will go after a few of the easier drive by caches. The longer hikes along the trails will have to wait another day.
The first virtual geocache (GCAE84) is located by this rock structure. Kinda like a small cave to serve some purpose of an early settler. 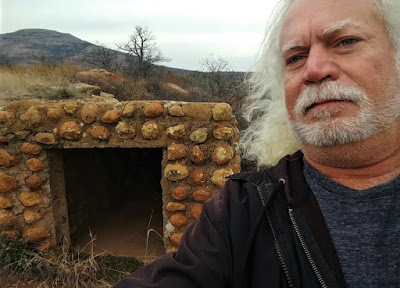 Another virtual cache by the stone archway leading into the Medicine Bluff Park (GC2413). Then there's this small little man-made cave, though this one has a door (GC2412). You know I think we may have ventured into The Shire! These are all Hobbit Houses! Bilbo Baggins must be on another adventure. 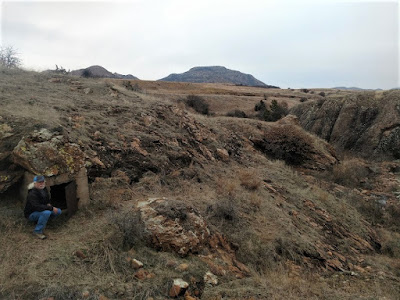 Nearly 60,000 acres of natural beauty. No sighting of any elk, bison, or deer yet. 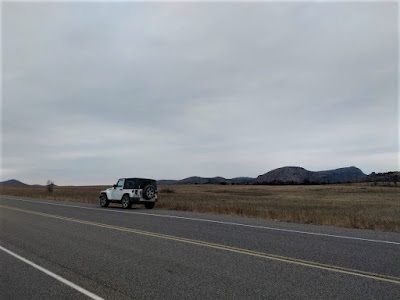 On April 4, 1926, Rev. Anthony Mark Wallock (1890–1948), an Austrian immigrant raised in Chicago, initiated an Easter service and dramatic production with cast of five in the Wichita Mountains of Oklahoma. The play quickly grew into a large, traditional passion play, attracting thousands of spectators each year. The 1926 Easter service, held near Medicine Park in the Wichita Mountains, drew two hundred visitors and grew to five hundred the next year. In 1930 approximately six thousand people witnessed the pageant. Oklahoma City's WKY radio broadcast the production live in 1936, and it was carried nationwide on two hundred stations. By the late 1930s the event annually drew more than 100,000 observers.
In 1934–35 the Works Progress Administration (WPA) built the present Holy City of the Wichitas five miles west of its original location. A dedication ceremony in 1935 commemorated the completion of numerous full-sized buildings and structures, including the temple court, Pilate's judgment hall, Calvary's Mount, the Garden of Gethsemane, watch towers, rock shrines, and perimeter walls. By the next year WPA workers had built the Lord's Supper building, Herod's Court, a chapel, and other amenities.
The script generally depicts Jesus' life from birth through crucifixion and resurrection. In its first years, the several-hours-long drama began in the early morning, between two and three o'clock, and culminated at sunrise with the resurrection. At sunrise in 1935 skywriter Art Goebel inscribed "Christ Arose," above the pageant grounds, and in subsequent years aviators were hired to write or to drop flowers at the end of the ceremony. Attendance peaked in the 1940's and slowly declined to as few as three thousand in the 1980's. In 1985, trying to bolster the crowd, the pageant changed its schedule to begin at midnight and end in the dark at four in the morning. In 1986 the start time changed to nine o'clock in the evening, although many traditionalists desired the sunrise ending. In 1997 three thousand people experienced one of the nation's longest-running Easter pageants.
The event has never charged admission. The 150-acre site is leased from the federal government by the Wichita Mountains Easter Pageant Association, a private organization. Situated in the Wichita Mountains National Wildlife Refuge, the Holy City of the Wichitas admits tourists during daylight hours.
This is also our next virtual geocache (GCAFF3). I tried to do a panoramic photo of the site, but it doesn't do it justice. You just gotta see it in person if you're ever in the area.

The next virtual geocache is located at the Jed Johnson Dam (GC1BE1). The Dam and Lake Jed Johnson was created in 1940 across the Blue Beaver Creek. Covering 57 acres, its primary purpose is preservation of wildlife habitat. The surrounding area is home to deer, elk, longhorn cattle, and bison. 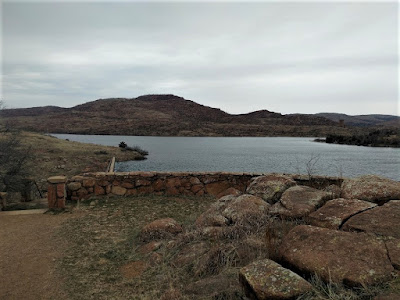 Just one more virtual cache and then it's time to be heading south. This one was at a huge family sized picnic table at one of the campgrounds. Supposedly, the largest camping site picnic table in Oklahoma (GC5B5D).
One of the nearby towns that surround the WMWR is Cache, Oklahoma. And for a geocacher, it's mandatory to stop and find atleast ONE cache in cache! After a few photos by the "Welcome to Cache" sign, we drove to the nearby Pete Coffey Mennonite Church to grab the "Cache Stash" traditional cache (GC6GVYK). 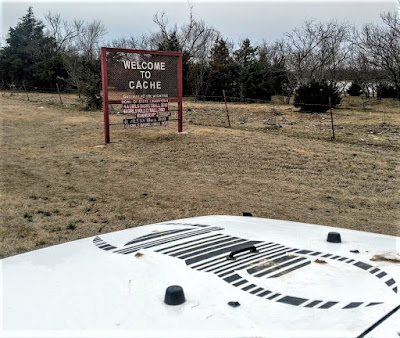 So now it's after lunch, though we haven't even eaten lunch. We still have 300 miles and about 5 hours of driving to get home, CLFM even further. So we skip all remaining geocaches and make a beeline for home stopping only for food and gas. It was some long days caching well into the night. After 119 caches, dozens of new counties, and over 3000 miles later, it'll be good to be home. (And that doesn't even include all the geocaches that CLFM managed to get while I was in training meetings for two days.) Now I need a vacation to recoup from my vacation!
Now to plan the next roadtrip. There are new ways to follow me. Follow the blog directly by using buttons on the right of your computer screen. Or through various social media platforms:  Facebook, MeWe, Parler, Gab, Twitter, Instagram, MAGAbook, and Reddit. Follow us on any or all of these platforms and whichever you choose, please leave your comments. We'd love to hear from you and it encourages us to continue sharing our adventures.
Posted by Mark at 11:36 AM