Hey everyone! I'm glad you made it back to check in on our progress. If you're just joining us, I had a fly in / fly out business trip and turned it into a week long geocaching roadtrip! I recruited my friend and fellow geocacher CuteLittleFuzzyMonkey (CLFM) to go along for the ride. He also did the cache planning and route navigating for the trip.
To catch up to where we are now:
Day 1: Texas to Minnesota in TX & OK
Day 2: Texas to Minnesota in OK, KS, & MO
Day 3: Texas to Minnesota in NE, IA, & MN
Day 1: Minnesota to Texas still in MN
So today we started out in Saint Cloud, Minnesota. Checking out of the hotel at sunrise, our first stop was the parking lot to grab a simple LPC (GC62YJN).
Driving southbound, we stopped in Willmar, MN for our next cache to claim a find in Kandiyohi County. It was the Point Lake Travel Bug Hotel geocache (GCXZ87). This was one cache that I'm glad we're here in the winter with sub-freezing temperatures. While the geocache was hidden among the trees on the bank of the lake, the lake itself was frozen over with ice and snow! Being a Floridian / Texan, this was finally an opportunity to "walk on water." We took turns walking out onto the frozen lake and taking a photo. 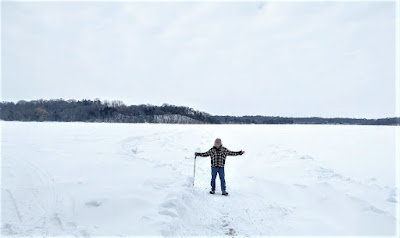 Next up was a quick park & grab geocache (GC7AEPM) in Clara City, MN to claim a find in Chippewa County.
Then there was the Tri-State tri-corner virtual geocache (GC8809). Even though this monument sits on the corner of Minnesota, South Dakota, and Iowa, technically the coordinates are in South Dakota. This was my second tri-state cache in already this year! This one was much colder. Stepping out from the warm GeoJeep, I didn't feel like putting my heavy jacket back on. There was also a traditional cache placed there as well (GC41H35). So it was a 2fer location! 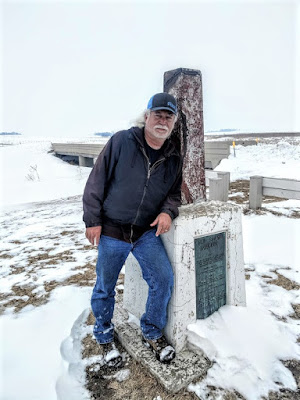 Our next geocache and another virtual (GCFBF1) was along US-18 on the eastside of Canton, SD. There are three roadside historical markers concerning this area. The one the cache focuses on was about the Norwegian immigrants and skiing. Since I don't want to give away the answers, I'll tell you what one of the other historical markers says: The Hiawatha Asylum For Insane Indians.
"Receiving Congressional appropriations in 1899, the Hiawatha Asylum for Insane Indians was the second federal mental hospital and the first dedicated to American Indians. The first patient arrived in 1902, and through 1934, more than 370 patients –ages two to eighty, from fifty tribes nationwide – lived here. Patients did domestic and agricultural work onsite, were occasionally shown to paying visitors, and underwent treatment with methods later deemed outdated and dehumanizing. From 1929 to 1933, federal inspectors found intolerable conditions, inadequate staffing, several sane patients kept by force, and numerous other abuses. In 1933, John Collier, the newly appointed Commissioner of Indian Affairs, ordered the asylum closed. G. J. Moen, with the Canton Chamber of Commerce, filed an injunction to keep the asylum open, but it was overturned in federal court. Many patients were discharged and those who still needed care were sent to St. Elizabeth’s Hospital, Washington, D.C. The major buildings used by the asylum have since been demolished. The Hiawatha Asylum cemetery, where at least 121 patients were buried in unmarked graves, is located between the 4th and 5th fairways of the Hiawatha Golf Club. In 1998, the cemetery was listed in the National Register of Historic Places.
Making our way down to Lincoln, Nebraska, our next two virtual geocaches (GCC963, GCB88C) were located at the Wyuka Cemetery. One cache was to recognize Albert Gordon MacRae (1921 – 1986) was an American actor, singer and radio / television host, who appeared in the film versions of two Rodgers and Hammerstein musicals, Oklahoma!
The other virtual was for an infamous 1950's serial killer. Inspiring the films "The Sadist" (1963), "Badlands" (1973), "Kalifornia" (1993), "Natural Born Killers" (1994), and "Starkweather" (2004). "A Case Study of Two Savages," a 1962 episode of the TV series Naked City, was also inspired by the Starkweather killings. More recently a "Criminal Minds" episode portrayed a newlywed killing spree very similar to the crimes of 19 year old Starkweather and his 14 year old girlfriend Fugate.
Also in Lincoln, NE was another virtual cache at the Lincoln Children's Zoo (GCGJQ1). The cache is highlights the Dakota Age Sandstone which is said to be 130 million years old.
South of Lincoln out in very rural Odell, NE is our next virtual geocache called "Oketo Cut Off" (GC8CCE). I'll give you much of the description from the historical marker without giving away the answers for the cache. During the 1860's, stagecoaches passed near here along the Oketo Cutoff. The cutoff diverged from the Ft Leavenworth to Ft Kearney Military Road northeast of Marysville, Kansas angled northwest to cross the Big Blue River near Oketo, KS and passed through the Otoe Indian Reservation just south of Odell. The cutoff rejoined the main trail between Steele City and Dillar, NE.
The stagecoach company owner, who had the government contract to carry mail and passengers from the Missouri River to California, ordered the cutoff laid out producing a shorter, better road and bypassing Marysville after the town refused to improve the Military Road. Although his coaches used the Oketo cutoff, freighters and other travelers continued to follow the Military Road which had been popular since the 1840's. After only a few months he abandoned the cutoff.
This metal sculpture was there along with the historical marker to recognize this historical trail. Kinda hard to see as it was already dark by the time we arrived. 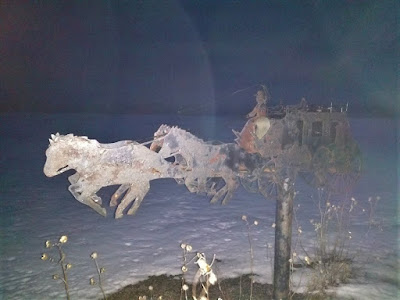 Well it's late and it's dark out. However even if we wanted to call it a day and stop geocaching, we're out in the middle of nowhere and there's no hotel to be found anyway! So we keep going and have now dropped down into Kansas.
Just north of Concordia, KS, is our next target at the "Kansas POW Camp" virtual cache (GC4CAF). During World War II, 300,000 German Prisoners of War were interred in the United States. Three larger camps were located in Kansas, near Salina (Camp Phillips), at Fort Riley, and just outside Concordia, Kansas. Construction of Camp Concordia began in February, 1943 and the POW camp was turned over to the US Army on May 1, 1943. At its peak Camp Concordia had 4,027 Prisoners, over 800 soldiers and 179 civilian Employees.
Camp Concordia had 304 buildings including a 177 bed hospital, fire department, warehouses, cold storage, and officers club, and barracks, mess halls & administrative buildings for both the German POWs and American soldiers. All of the prisoners at Camp Concordia were members of the German Army. Most were captured in Africa, and the first POWs came from Rommel's Afrika Korps. Only the enlisted POWs worked, most of them on farms, but some worked on the railroad or in the ice plant.
Camp Concordia officially closed on November 8, 1945. Many of the buildings were torn down and others were moved. Some are still serving as homes in Concordia. The only structures remaining at the original location are Guard Post 20, a ware house, some stone walls, the officers club, a few foundations, and the tower which once supported a 100,000 gallon water tank. A two story stone guard tower has been reconstructed and pictured below. 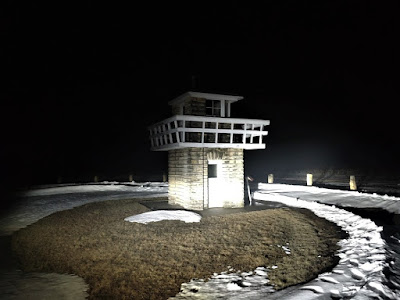 There was one more virtual geocache we got that night before calling it quits. It was for the "Boston Corbett Dugout" (GCFF36). Along this rural Kansas road you will find a small monument which has been erected as a historical marker near the location of a Dugout once owned by Boston Corbett. Boston Corbett was an Army Sergeant who was with a detachment of soldiers searching for John Wilkes Booth. When they caught up with Booth, Corbett was credited and later discharged from the Army for the shot that killed Booth. It seems that Corbett made a spectacular shot through a crack in some barn siding, however Corbett was discharged for failing to follow orders in the shooting.
After being discharged, Corbett homesteaded in Kansas and made this dugout his home for awhile. The eccentric man had a run in with the local sheriff (after showing some local children the business end of his pistol) and through some sympathetic friends he landed a job at the state capital. After an incident where he displayed his 38 at the capital he was sent to the state insane asylum, which he quickly escaped from. He made his way to a friends house and was last seen jumping a train. There is no record of what happened to him after that.
Now getting to and from this last geocache was an adventure of its own! This rural Kansas farmland dirt road was now slushy mud with the melting snow. We were in 4x4 mode for several miles slipping and sliding. It was pitch black with no lights anywhere in site on the horizon. We had limited cell phone service and running low on gas. All we could see was the path before us from the headlights. I was doing my best to stay down the center of the road cause I wasn't sure if under the clean snow on the sides was a ditch. I knew that for the most part, my tires were spinning faster than we were moving! Traction was coming and going at best. I just knew that as long as I was moving forward, I did NOT want to ease off the gas.
After about 20-30 minutes at a slow pace, we finally made it out to a paved road. Now we can finally stop worrying about get stranded out in the middle of nowhere! We made our way to US-24 and followed it to Clay Center, KS. There we finally found a gas station and was able to take a look at the Jeep. I thought it would be covered in mud more than it was. I guess being the wet slushed snow blew off the last 15 or miles. 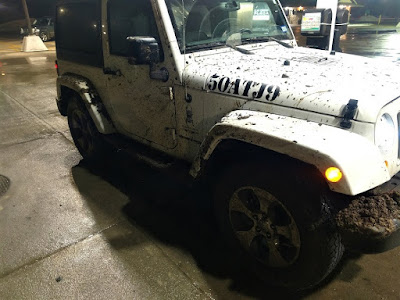 Still no hotel worth staying at, we continued east over to Manhattan, Kansas. There we were able to find a decent place to finally call it a day about 11 PM, a LONGGGGGG DAY!
Come back tomorrow and see how far we get. Do we make it back home to Texas or not? What other sights to we bring to you? You'll just have to wait and see.
There are new ways to follow me. Follow the blog directly by using buttons on the right of your computer screen. Or through various social media platforms:  Facebook, MeWe, Parler, Gab, Twitter, Instagram, MAGAbook, and Reddit. Follow us on any or all of these platforms and whichever you choose, please leave your comments. We'd love to hear from you and it encourages us to continue sharing our adventures.
Posted by Mark at 3:35 PM