2019-03-04: A Packed Geocaching Road Trip from Texas to Minnesota and Back! Day 3 in NE, IA, and Arriving in Minneapolis!

What were we thinking! My Geocaching sidekick and navigator, CuteLittleFuzzyMonkey (CLFM) and I, both from Florida, now working and living in Texas, on a roadtrip in early March on the way to Minnesota in sub-freezing weather! Who's idea was this anyway? Oh yeah, it was my company's business training meetings I was driving to that we turned into a "fun" geocaching adventure! But it is so COLD!!
My back is feeling somewhat better. If you remember I twisted while reaching for a cache and pinched a nerve in my lower back. Between the Advil, stepping out into the cold, and returning to the heated seats of the GeoJeep, it's bearable.
Starting out at sunrise right here in Omaha, Nebraska, our first stop was at the Henry Doorly Zoo and Aquarium for a virtual geocache (GC7B6PE). Obviously they weren't open yet, but we got the needed logging requirements and continued on. 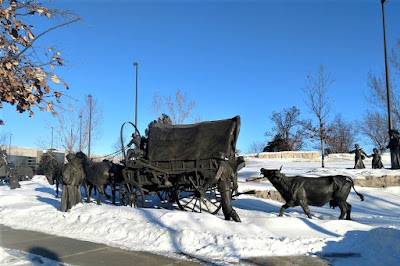 Not too far away and still in Omaha, we stopped by the Earthcache Sedimentary and Igneous Rocks (GC3VXN1). Located in the Spirit of Nebraska's Wilderness and Pioneer Courage Park, it consists of more than 120 individual bronze statues covering six city blocks. A pretty cool look of a wagon train making it's way through the rugged winter snow in Nebraska. 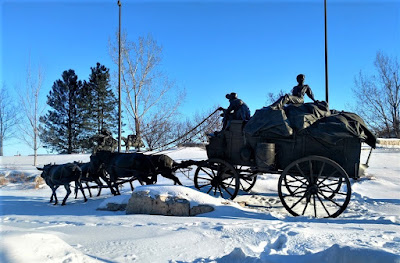 Before leaving town, we stopped to pick up Omaha's Easiest Multi-Cache (GC4PDC4). There wasn't anything special about this cache or anything interesting in it's location. But it did add another type of cache which bumped up my cache types for a single day from 4 to 5, as we finished with an earthcache, an event, a multi, a traditional, and a virtual cache.
Making our way into Iowa, we stopped at Karen's 71-20 T.B. Rest Stop (GC1DEYB). This was located in Early, IA which gives me Sac County. It's also in the Protestant Union Cemetery. There's only 21 graves here, all from the late 1800's. The town of Early began in 1878. In 1882, most of the town moved 1 1/2 miles to the north to be closer to the railroad.
We stopped for gas on the outskirts of town. Go figure there's another cache in the parking lot (GC4C32V)!
Continuing north on US-71 in Iowa, our next stop was for a virtual geocache that I never would have figured there's be one! Who knew there would be a lighthouse in IOWA of all places? Located on the northshore of Storm Lake, the Siebens Lighthouse (GCG72J) was built in 1992. This was about as close as I could get with the snow being up to my knees already. 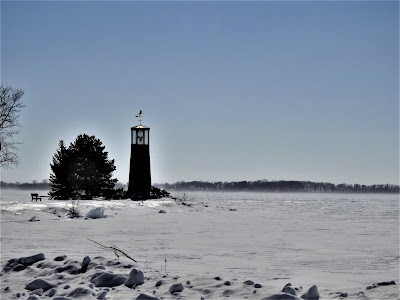 Getting back to US-71 northbound, it's a two-lane highway. Having my back issue on day one and having to deal with that, throw in the single digit freezing temps, can I atleast have a day WITHOUT any new issues? Nope, it just ain't gonna happen!
As we're driving northbound at 60-65 MPH, the 18-wheeled farm trucks are hauling 60-65 MPH southbound. As each one passes by, the GeoJeep hood catches the 120 MPH wind through the front and causes a violent shutter of the hood. Well the frozen rubber latches on the sides of a Jeep hood just couldn't hold it any longer. Suddenly the driver side latch snapped and the corner of the hood just popped up about a foot! Scared the crap out of me!
I pulled over to take a look. Now I got nothing holding the drivers side of the hood secure. Now even at just 20-30 MPH and pulling way over onto the shoulder, the passing trucks just blow the hood up. I manage to drive a couple of miles down the road to this business entrance where I can get clear of traffic and try to figure out a solution. I can only mess with it for a minute or two before having to get back in the GeoJeep to thaw my fingers out before they fall off from frostbite! I got some basic hand tools and a package of zip ties. But with the brackets still in place, only the rubber piece broke off, there's nothing to run the zip tie through.
After about 30 minutes, someone from the shop pulled in and asked if I needed help. He let me pull inside the back of the building so that I could work on it without my fingers freezing. I did manage to get the top part of the bracket off. That allowed me to run the zip ties through the bolt holes and attach to the bottom bracket. GREAT!
Well not really. It didn't take long in those freezing temps for those plastic zip ties to become brittle and pop. After a couple of singles breaking, then two at a time, and even three! They wouldn't last at speed. So I had to continue to slow down and pull onto the shoulder every time an 18-wheeler passed by.
Nearly an hour later we finally made it up to the town of Spencer, Iowa. There they had a Jeep dealer. But they didn't stock any of those latches. Now what... There was a Menards around the corner, so I drove over there. Looking around for ideas, I found some tie wire used for holding rebar in place before pouring concrete. I bought it and a pair of wire cutters. But in trying to tighten it down the wire kept breaking. It was too thin.
Back inside I looked at other types of wire. I found another that was a little thicker and covered in a flexible plastic. So I buy that one. A little harder to snake through the holes, but I managed to tighten the hood down securely! 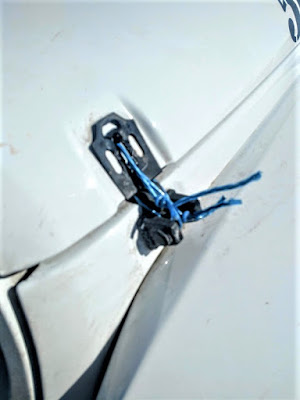 After that ordeal we needed a break and stopped over at Arby's for a bite to eat!
On the road again, we finally made it into Minnesota up US-71 northbound. We then pickup I-90 eastbound making up some lost time. The wind was really blowing the snow across the highway. 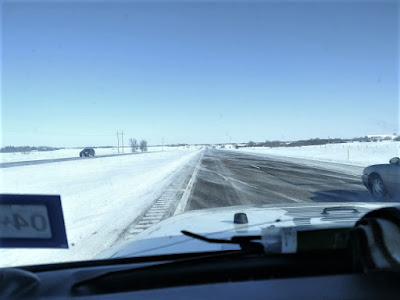 Upon arriving in Blue Earth, MN, there was one virtual geocache that we just couldn't pass up. I mean how can you pass up the huge Jolly Green Giant and Sprout! (GC628B) 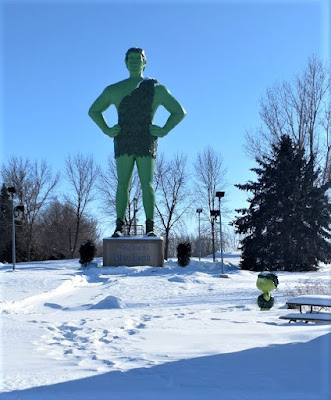 Northbound on US-169, we stopped for another virtual geocache in Kasota, MN. Called Designated Trout Stream (GC938E), it was located along the highway in the Seven Mile Creek Park. The snow was pretty thick there and I put the GeoJeep in 4x4 mode to make sure I can maneuver around. Got the information we needed and got back into the warm GeoJeep. 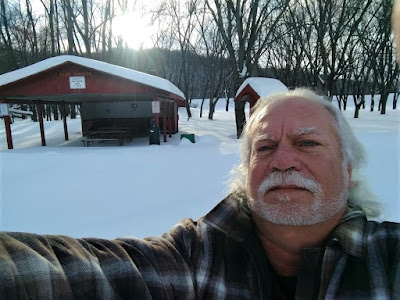 Two more virtual geocaches, one for the original location of the Jolly Green Giant (GC9392) which was originally called the Minnesota Valley Canning Company. And the other was at a Veterans War Memorial (GCDF77).
Finally we made it to Minneapolis! But due to todays delays, we don't have much time. We check into the hotel and get unpacked quickly. Then off to Teresa's Mexican Restaurant where we are hosting our geocaching event "Texas Meets Minnesota in Mexico" (GC83PEG). It was a great time spent with and meeting the local geocachers. We had 18 cachers come out to welcome us! 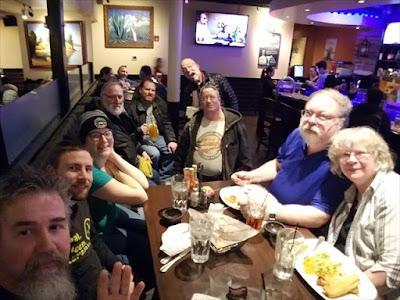 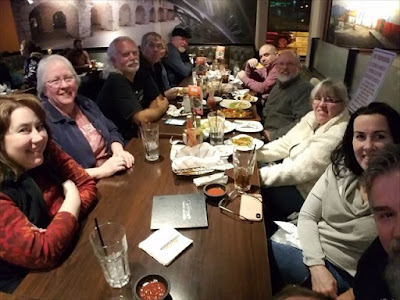 Well that's it for Day #3 of our roadtrip. I get to spend the next the next two days in a conference room for some training meetings. CLFM will be out in the GeoJeep roaming all over the place finding more caches. Atleast I'll be staying warm!
Be sure to stop back by for the return trip back to Texas. We're not constrained by time for the return trip so who knows where we'll end up!
There are new ways to follow me. Follow the blog directly by using buttons on the right of your computer screen. Or through various social media platforms: Facebook, MeWe, Parler, Gab, Twitter, Instagram, MAGAbook, and Reddit. Follow us on any or all of these platforms and whichever you choose, please leave your comments. We'd love to hear from you and it encourages us to continue sharing our adventures.
See you next time...
Posted by Mark at 10:48 PM