What a day! I think we drove about 400 miles all together. I mean we DID drive to Earth and back! Saw some strange things, learned a lot of history, and met up with Billy the Kid. Geocaching does take you to some pretty unique places.

After several quick roadside Geocaches, our first cache of interest was at the Halfway Cemetery (GC5NEFE). Now, I'm not sure what it was halfway between but the thing that comes to my mind is a Catholic cemetery for those in purgatory. Or maybe zombies? I don't know... 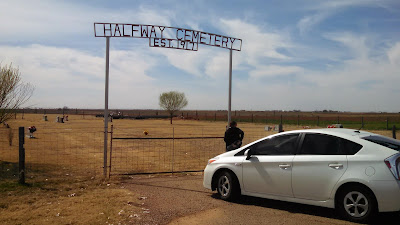 Actually the Halfway community developed around a school establishment in 1909. The name signifies its location between the county seats of Plainview and Olton. A post office operated in Halfway from 1910 to 1914. In 1945 the community had a school, two churches, a cotton gin, and a population of twenty-five. The school closed in 1952, and the building is now used as a community center. In 1980 Halfway had a gin, an agricultural equipment plant, churches, several businesses, and a population of seventy. In 1990 and again in 2000 the population was fifty-eight. 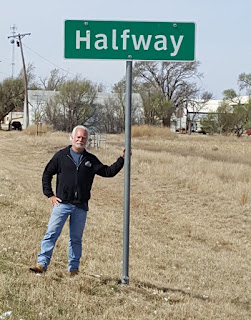 Since we've gotten halfway there... next stop is Planet Earth! (GC3H4VG) And now we know the question that has baffled scientists for many years. No, the earth is NOT millions and billions of years old. Nope, the Earth was established  in 1924. Everything in the history books before that was just our imaginations.

Earth, Texas was established by William E. Halsell, who laid out the townsite in 1924. Originally Halsell named the city Fairlawn, but in 1925 it was renamed Earth when it was learned that there was already a town in Texas by the name of Fairlawn. In order to find a new name the townspeople sent in suggestions, and the agreed-upon best name was chosen.

They even put the name on this huge tower so all the UFO's and space aliens headed over to Roswell know where they are. 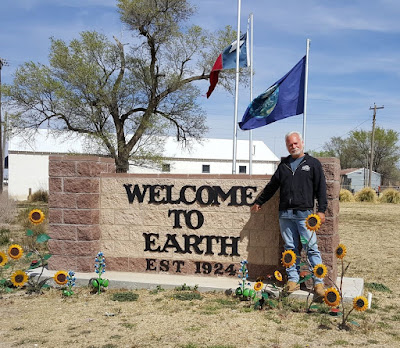 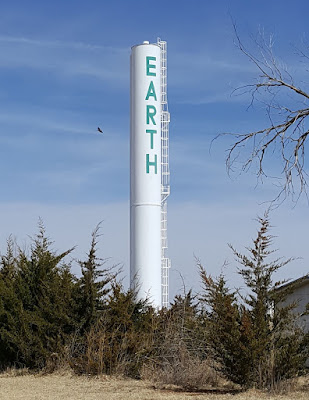 Now our next cache was about 100 miles away across the state line into New Mexico. We wanted to make sure we got to it today, so we skipped all the others between there and will grab as many as we can on the way back. So we continued west on US-70 onto US-84 all the way out to Fort Sumner, NM.

Our first stop and next cache (GC8493) is who made Fort Sumner famous. This virtual cache brought us to the grave sight of the wild west outlaw Billy the Kid. Not exactly a good photo of the headstone, but his headstone was stolen twice! The first time it went missing for 26 years before its location was discovered. Within the large cage are three graves belonging to Billy the Kid and his friends Tom O'Folliard and Charlie Bowdre. After Billy the Kid's headstone was recovered the second time, a cage was built around the entirety and the headstone itself bolted down at the foot of his grave. 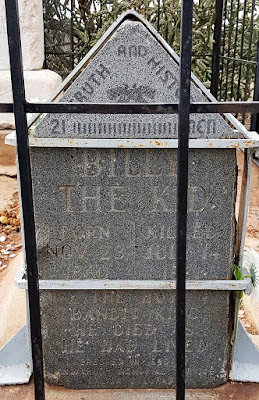 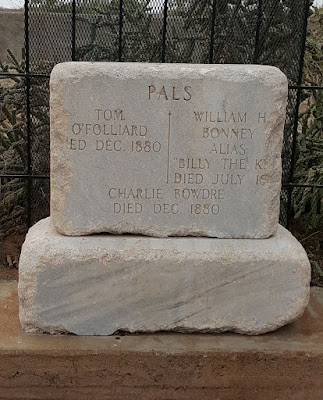 There are several more gravesites here at the historic Fort Sumner site. Here are just a couple samples. 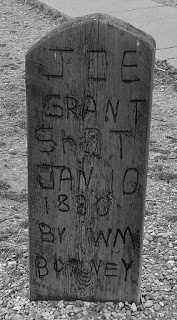 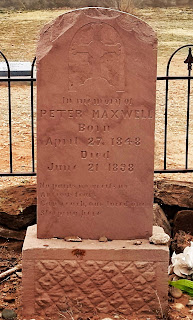 There were four more Geocaches located in the town of Fort Sumner. One at the Billy the Kid Museum (GC29XY8), the Fort Sumner historical marker (GC1P67K), and two more at the main cemetery in town (GC60CPY and GC60CR4). And now that we've gotten all those, we still had 162 miles and more caches to get on the way home! 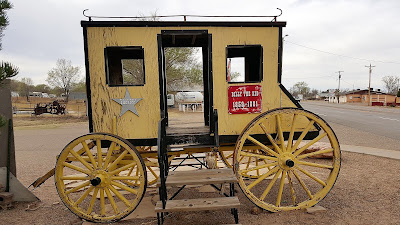 On the way back in another old town of Taiban we found our next three caches. The first one was the former trading post, former antique store, and now just former and abandoned business (GC34E7G). The Taiban Trading Post was built in 1915 and was once a thriving business. 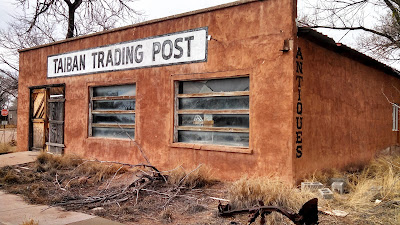 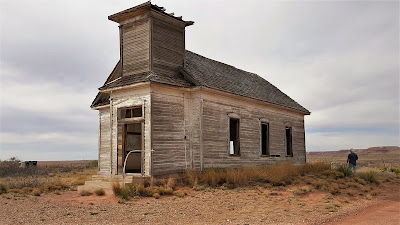 The next cache in Taiban was the End of the Road (GCV8MZ). Here sits the remains of the First Presbyterian Church of Taiban. Completed in December of 1908 at a cost of $250, its first sermon was presented by the Reverend John R. Gass. As the towns population dwindled due to the depression and drought, the church held its last service in 1936.

As we arrived here, we see a pickup truck with Texas plates on it and a guy with something on a stick walking towards the church and right into the front door. I thought maybe another cacher holding a car GPS. I walk down the side of the church towards the back looking for the cache and he went all the way through the church and is out back. I ask him if he's Geocaching and he says he was taking a video. We get to talking and it turns out he's on vacation from Germany and traveling through Texas and New Mexico for 12 days. We chat for a little while and wish each other safe travels.

On the eastern edge of town was our next cache at the Watering Hole (GC1RVY1). This once liquor store, maybe even a bar is now half burned down. Once a destination for the thirsty, now only a destination for Geocachers. 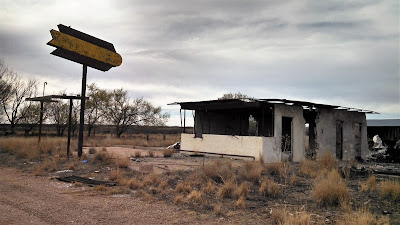 Continuing eastbound was our next cache (GC617HR) and piece of history. At noon on November 30, 1944, a World War II supply train hauling 165 five-hundred-pound bombs headed for the Pacific Theater derailed in Tolar. The train caught fire and the bombs exploded. The blast, which leveled nearly every building in town, could be heard 60 miles away. It vaporized 500 feet of track and sent a 1,500-pound axle crashing through a store and rolling out the back. One person, Jess Brown, was killed in the explosion after a piece of iron shrapnel struck his head. 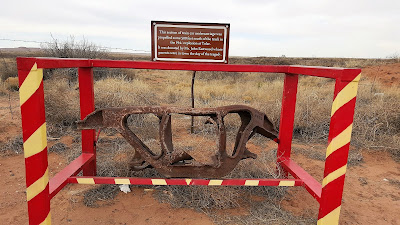 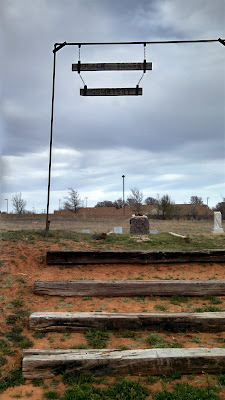 Our last cache for the day just west of Clovis, NM was located at the Blacktower Cemetery (GC61N67). Located west of the Chavez West Housing addition near Cannon Air Force Base, the cemetery is considered to be a lost cemetery and shows signs of not having been kept up for a long time. Tall grass, weeds and stickers guard the entrance to this piece of eastern New Mexico's history, but at one point airman from neighboring Cannon Air Force Base turned out to restore and clean up this treasure.
According to a June, 2009 article, 25 volunteers showed up to the cemetery to clear away the weeds and shovel away the sand that had blown over the headstones. In the six years since the service project, the cemetery has fallen back into its forgotten, buried state. Railroad tie steps still exist and lead visitors to the entrance of the cemetery where several headstones are visible, but extremely difficult to get to.

According to a May 22, 2009, Clovis News Journal article, the Blacktower Cemetery was originally started as a family cemetery and became the final resting place for 42 individuals. The article cites local High Plains Historical Foundation member Harold Kilmer as saying that Blacktower is unique because research suggests that two Civil War veterans are buried there: Emmett Fulkerson, who died June 17, 1911, and William Brantley, who died Feb. 7, 1908. Kilmer said the cemetery was started by an unknown farmer’s family about 1906 after an infant’s death. 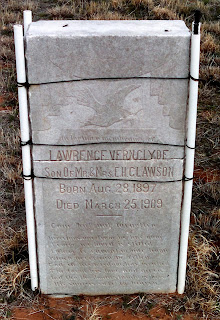 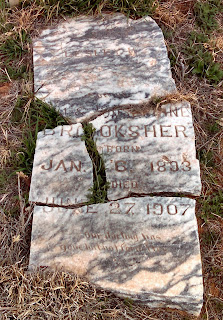 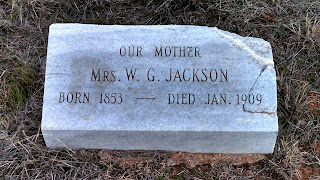 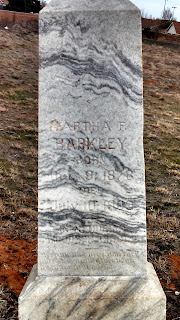 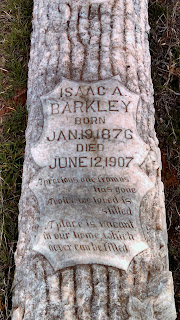 After looking around the cemetery at some of the headstones, we finally arrive in Clovis, NM and a wide variety of restaurant choices! You would think by now we would have learned to pack a picnic lunch for our adventures. Because having past through Clovis heading west out to Fort Sumner, spending time in Fort Sumner, then driving back to Clovis, there's not much for places to eat! By now we're practically starving!

So we grab a quick sandwich at Subway before driving the two hours back to Lubbock. We ended the day with 16 Geocaching finds and a new county in New Mexico. And another day of adventure through history.
Posted by Mark at 11:10 PM